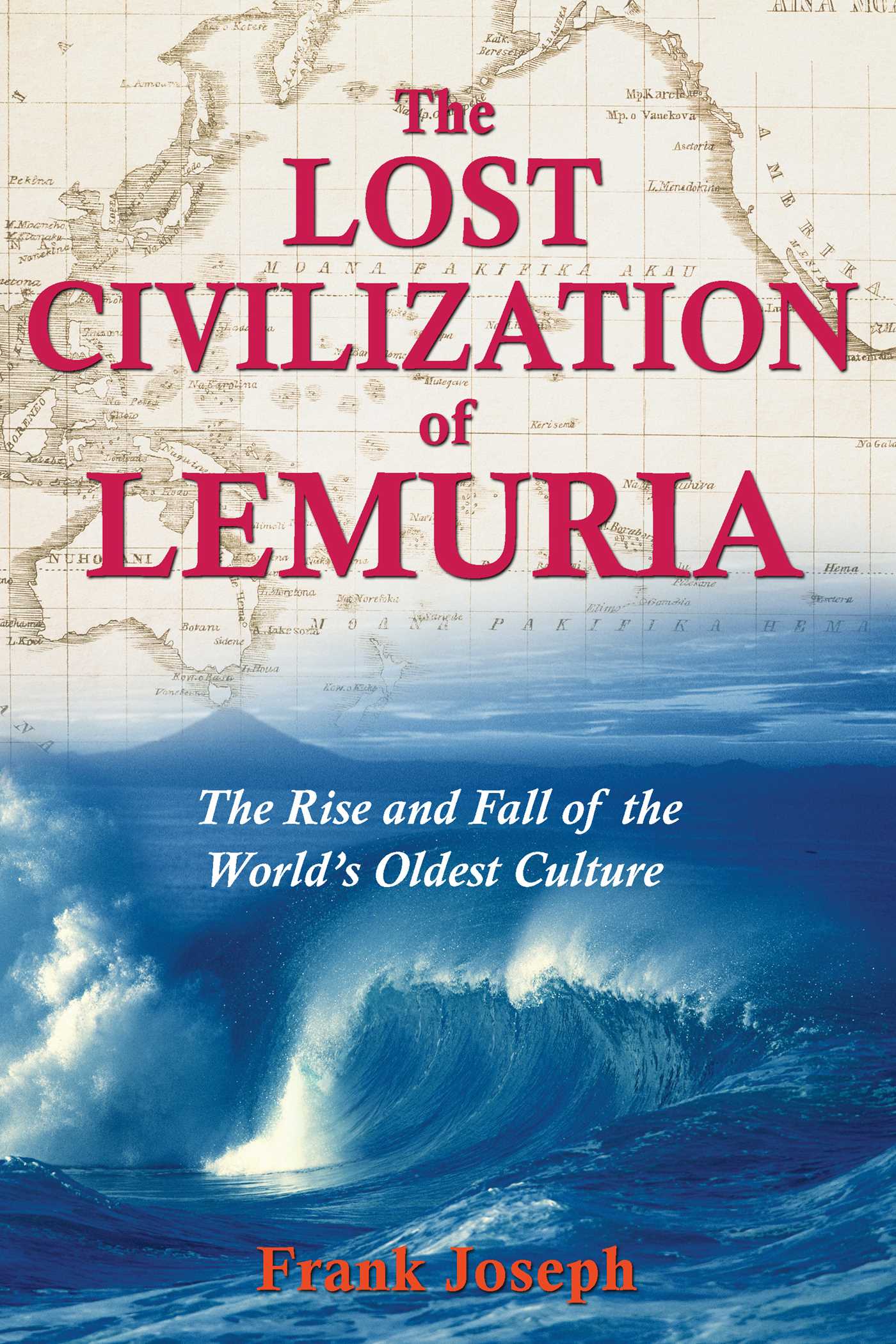 A compelling new portrait of the lost realm of Lemuria, the original motherland of humanity

• Reveals a lost, ancient technology in some respects more advanced than modern science

Before the Indonesian tsunami or Hurricane Katrina’s destruction of New Orleans, there was the destruction of Lemuria. Oral tradition in Polynesia recounts the story of a splendid kingdom that was carried to the bottom of the sea by a mighty “warrior wave”--a tsunami. This lost realm has been cited in numerous other indigenous traditions, spanning the globe from Australia to Asia to the coasts of both South and North America. It was known as Lemuria or Mu, a vast realm of islands and archipelagoes that once sprawled across the Pacific Ocean. Relying on 10 years of research and extensive travel, Frank Joseph offers a compelling picture of this mother­land of humanity, which he suggests was the original Garden of Eden.

Using recent deep-sea archaeological finds, enigmatic glyphs and symbols, and ancient records shared by cultures divided by great distances that document the story of this sunken world, Joseph painstakingly re-creates a picture of this civilization in which people lived in rare harmony and possessed a sophisticated technology that allowed them to harness the weather, defy gravity, and conduct genetic investigations far beyond what is possible today. When disaster struck Lemuria, the survivors made their way to other parts of the world, incorporating their scientific and mystical skills into the existing cultures of Asia, Polynesia, and the Americas. Totem poles of the Pacific Northwest, architecture in China, the colossal stone statues on Easter Island, and even the perennial philosophies all reveal their kinship to this now-vanished civilization.

We all agree that your theory is mad. The problem that divides us is this: Is it sufficiently crazy to be right?
--Niels Bohr

In our last several chapters, we described archeological ruins on the islands of Pohnpei (part of Micronesia) and Rapanui (Easter Island) as the remains of power stations erected by the Lemurians millennia ago to effect seismic and meteorological change. If these sites were the only evidence, they might be dismissed as the lonely outposts of some foreign civilization that established itself in isolation, utterly alien to anything known elsewhere. But additional evidence on behalf of that lost science has indeed been found, most dramatically at another obscure speck of territory in the southwestern Pacific.

Known until 1978 as the Isle of Pines, Kunie (pronounced KOO-nya) is inhabited by 1,500 Melanesian residents living on fifty-eight square miles of French Polynesia. The eight-by-ten-mile island has bewildered investigators since its discovery in 1774, because it is the only place in Oceania with stands of ancient pine trees (Araucaria cooki) named after the famous English explorer Captain James Cook. How they got there and why they continue to thrive on Kunie, but nowhere else throughout the vast Pacific, is an enigma that still eludes scientific explanation. They must have been brought to and planted at this Melanesian outpost in prehistory. But by whom, and for what purpose? The trees are gigantic, towering from heights of 90 to 135 feet, although their branches are only about six feet long. The titanic pines guard Kunie’s rocky coastline and sprout from the tops of small hills.

The curious little island suddenly multiplied its mystery in 1961, when a university-trained archeologist excavated some of the mounds that dot the Isle of Pines. They had never been professionally examined before, largely because the hillocks were presumed to be natural formations of some kind. Directors at the Museum of New Caledonia in Moumea, the capital city, wanted to know if the tumuli might have been used by native ancestors for burial, so Luc Chevalier was dispatched to retrieve what, if any, artifacts he might be able to find inside them.

Digging into the first mound he approached, Chevalier was surprised to discover a cement cylinder, two feet wide and seven feet long. Composed of an extremely hard, homogeneous lime mortar containing innumerable bits of shell, its exterior was speckled with silica and iron gravel fragments that appeared to have hardened the mortar as it set. Chevalier was inclined to dismiss the obviously manmade cylinder as a remnant of some modern historical, albeit unknown, but prosaic influences and went on to excavate another earthwork. In it he found a cement drum virtually identical to the first. With some astonishment, he gazed across the Kunie landscape, which rippled with 400 such tumuli, resembling a colony of giant ant hills. Could they all hide such anomalous cylinders? he wondered.

Chevalier hurried back across the forty miles of open water to Moumea with his specimens, where they were analyzed at the museum laboratories. Researchers there verified that samples from both cylinders were artificial, but they were not prepared for the results of radiocarbon dating of Kunie’s lime mortar. Repeated tests confirmed that the cement was nearly 13,000 years old. Chevalier was sent back to the Isle of Pines at the head of an archeological team intent on a more thorough excavation. As he suspected, each of the 400 mounds contained cement pillars all alike in construction, differing only in their dimensions. They ranged in size from forty inches to more than two feet across, with lengths from three feet to in excess of nine feet. Seventeen similar mounds were known to exist on New Caledonia itself, in an area known as Paiita, and Chevalier dug into them as well, scarcely able to imagine that they, too, might conceal such strange objects. He was not disappointed, however. At the center of each earthwork was entombed a column of cement.

Incredulous academicians refused to accept the artificiality of what Chevalier had discovered, simply because they were convinced that human habitation in the southwestern Pacific before 3,000 years ago was “ridiculously impossible.” Skeptics endeavored to explain away the cement cylinders by arguing they were actually nests made by some hypothetical species of extinct giant birds, a wildly ludicrous attempt to buoy up already moldy dogma banishing all considerations of early humans from Oceania. The skeptics insisted that the earliest use of cement went back hardly more than 2,000 years ago, to the engineers of ancient Rome. Yet here, in the southwestern Pacific, some maverick archeologists were spouting scientific heresy by claiming the natives of little Kunie had been mass-producing mortar cylinders at the end of the last ice age.

Neither Chevalier nor his detractors, however, were able to postulate the original utility of the lime-mortar columns. Childress, who visited the Isle of Pines in the mid-1980s, estimated their number at 10,000. While that amount seems excessive, they might approach a tenth as many. But again, why did someone go to the trouble of making hundreds of cement columns on this tiny backwater of an island? What purpose could they possibly have served? Their total lack of any adornment, ritual items, or human and animal remains proves they had no funereal or ceremonial functions. However, a clue may be found in those other anomalies shared in common at Kunie. Could its tall, deep-rooted pines have been deliberately planted along the coast by the same people who made the cement cylinders as an effective shield to protect their tumuli against the typhoons still known to ravage the island? It does at least seem oddly coincidental that two sets of features otherwise unique throughout the entire Pacific should be found together on the same obscure island, unless they were specifically intended from the beginning to complement each other.
Frank Joseph

"Thoughtfully written, with a sense of irony and keen insight. . . . this is an exciting book from beginning to end."

". . . it is difficult to convey the breadth of information contained in this work. There is something to appeal to all metaphysical interests. This not merely a book on the alternative origin of mankind, it is the history that has always been there and rings with authority. . . . It easy to read and hard to put down. I recommend it highly."

"In this entertaining and intriguing book, Frank Joseph has again pieced together a marvelous history of ancient times."

"Frank Joseph's investigation tells fully, for the first time, the uplifting, and ultimately tragic, story of our ancestral home upon the waves."

"One of the reasons why this may be the decisive book on Lemuria is Joseph's erudite and methodical analysis of the topic. Unlike most books about Lemuria, which dance fancifully with speculative theories and metaphysical non-sense, Joseph focuses on factual findings to build his hypotheses."