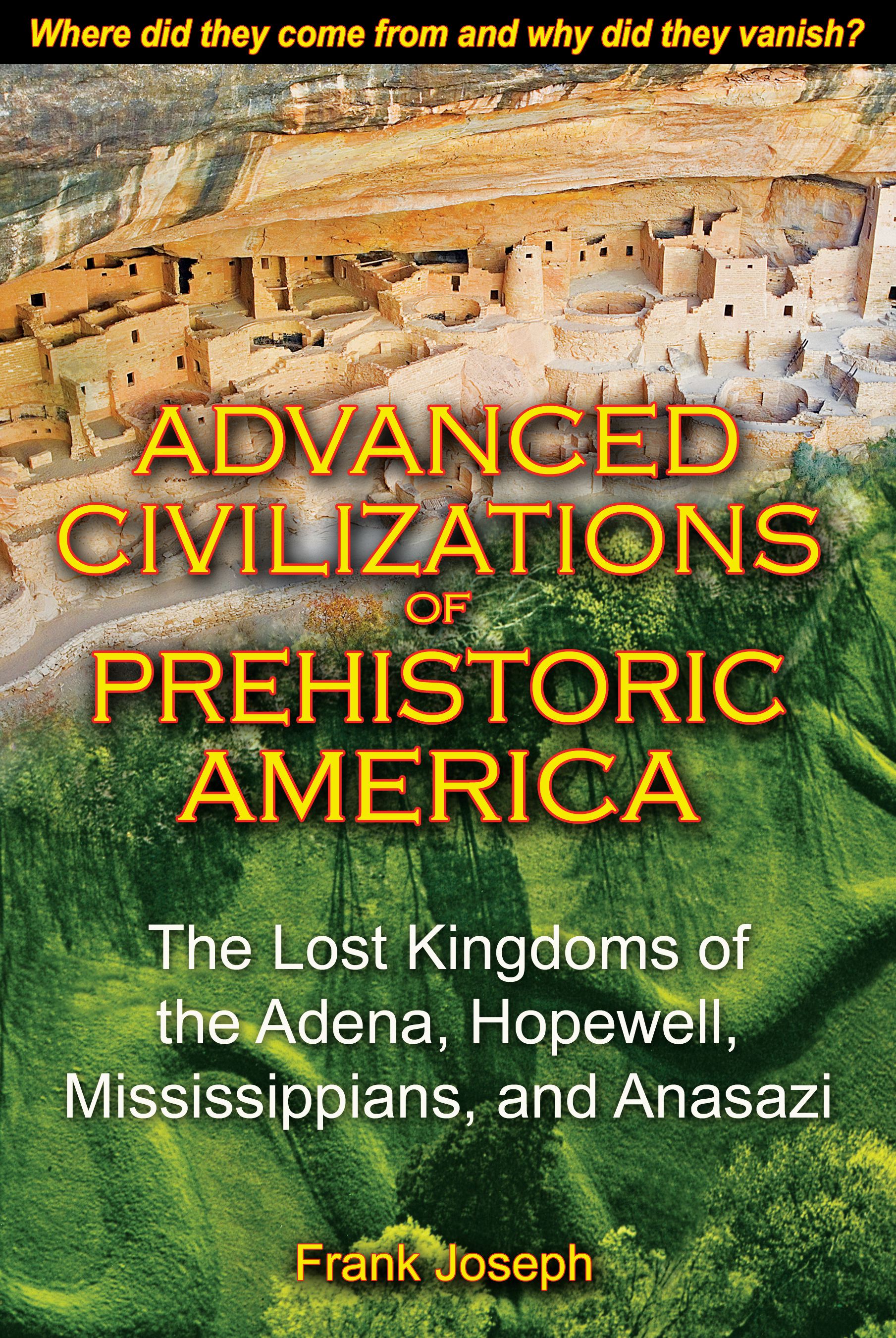 • Describes the cultural splendor, political might, and incredibly advanced technology of these precursors to our modern age

Before Rome ruled the Classical World, gleaming stone pyramids stood amid smoking iron foundries from North America’s Atlantic seaboard to the Mississippi River. On its east bank, across from today’s St. Louis, Missouri, flourished a walled city more populous than London was one thousand years ago, with a pyramid larger--at its base--than Egypt’s Great Pyramid. During the 12th century, hydraulic engineers laid out a massive irrigation network spanning the American Southwest that, if laid end to end, would stretch from Phoenix, Arizona, to the Canadian border. On a scale to match, they built a five-mile-wide dam from ten million cubic yards of rock. While Europe stumbled through the Dark Ages, a metropolis of weirdly shaped, multistory superstructures, precisely aligned to the sun and moon, sprawled across the New Mexico Desert.

Who was responsible for such colossal achievements? Where did their mysterious builders come from, and what became of them? These are some of the questions investigated by Frank Joseph in his examination of ancient influences at work on our continent. He reveals that modern civilization is not the first to arise in North America but was preceded instead by four high cultures that rose and fell over the past three thousand years: the Adena, Hopewell, Mississippian, and Anasazi-Hohokam. How they achieved greatness and why they vanished so completely are the intriguing enigmas explored by this unconventional prehistory of our country, Advanced Civilizations of Prehistoric America.

Mississippians Re-ignite the Torch of Civilization

With the obliteration of the Hopewell, followed three hundred years later by their Adena allies, the lamp of civilization went out in North America. Over the next two centuries, their abandoned ceremonial centers and monuments fell into decay, shunned as ghost-haunted places of evil by the victorious tribal warriors and hunter-gatherers whose own ancestors had preceded them by millennia.
Only after the turn of the tenth century did the Dark Ages fade before the arrival of a very different kind of civilized people. They came in large numbers, settling throughout the Mississippi Valley from the Gulf of Mexico to Wisconsin. Hence, the characterization of their society by archaeologists as the Mississippian Culture. The newcomers were serious agriculturists whose abundant fields of corn were required to feed the dense populations of their cities, such as that megalopolis sprawling on the Illinois side of the Mississippi River. But Cahokia was even greater than described at the opening of our investigation.
On the Missouri side of the river stands St. Louis. Previous to its birth in the late seventeenth century, it was known as “Mound City” for the profusion of ancient earthworks concentrated in the immediate vicinity. The noted explorer and archaeologist Stephen D. Peet visited the site in 1811 before expansion of the modern city had “destroyed the last vestige of the large group which could once be seen there, and all the pyramids, cones, ‘falling gardens,’ terraces and platforms, which once attracted attention, have disappeared.”
He counted more than one hundred and fifty earthworks, but realized even these formed only part of an even greater urban development: “There were at the time several large groups of mounds, one situated on the bluffs where St. Louis now stands; another on the bank of the Mississippi River, not far from the present site of East St. Louis; a third on the bottom lands about ten miles below the old village of Cahokia; the fourth about ten miles above the old village. . . . We speak of this because there has been a general impression that the celebrated ‘Cahokia’ mound, or ‘Monks Mound’ is a solitary pyramid, and that it has no connection with any of the works in the vicinity . . . the works of the entire region were all of them of the same class, the majority of them having been truncated pyramids.”
Unfortunately, that “general impression that ‘Monks Mound’ is a solitary pyramid, and that it has no connection with any of the works in the vicinity” prevails today among archaeologists, who continue to seriously underestimate the prehistoric urban center’s far vaster extent than the limitations they assign it. After factoring in “Mound City” and its affiliated, outlying areas, Cahokia’s population may have approached two hundred thousand persons. Accordingly, their influence was far-reaching. Pottery and stone tools in the Cahokian style have been found as far north as the Silvernail site near Red Wing, Minnesota.
The labor-intensive scope of their metropolitan achievement was apparent even before Cahokia was built. Soil studies reveal that the pre-city landscape had been originally undulating, but was expertly leveled, all four thousand acres of it, by the ancient construction engineers. Today’s archaeological zone includes sixty-eight mounds, although another forty-one still exist outside the park. Cahokia was the urban hub from which Mississippian Culture radiated outward to dominate the North American heartland. An important outpost sprouted in what is today the university city of Evansville, at the southernmost end of Indiana. Known as “Angel Mounds,” the site shared a common solar alignment with its Illinois counterpart. The doorway of Angel’s chief temple was oriented to sunrise of the summer solstice, the same fix occurring at Monk’s Mound. Cahokia is, in fact, physically linked to Angel Mounds by the Mississippi and Ohio Rivers.
About four thousand residents inhabited the 103-acre settlement, which included eleven earthen platforms surmounted by temples and palaces made of wooden posts and dried grass daubed over with white adobe.
The mounds were interspersed by two hundred secular dwellings, some for winter, others for summer. Their walls were decorated with geometric themes colored red, yellow, and blue. Nearby were numerous gardens of corn, beans, pumpkin, gourds, and sunflowers. Pecans were gathered in a grove beside a step pyramid forty-four feet high and four acres in area. An unusual plaza was sunk like a great bowl into the ground. Within this broad depression ceremonial, athletic, and market activities took place.
Originally, the site was almost entirely surrounded by a river channel, practically rendering Angel Mounds an island. Angel Mounds was inexplicably abandoned by its leaders and most of its population about 1310. Why they left and where they went remain mysteries still bedeviling scholars’ best efforts to understand America’s prehistory. The inhabitants left behind no signs of disease, war, social upheaval, crop failures, overfishing or hunting, earthquakes, or severe weather. For the next one hundred and forty years, the site was occupied off and on by diverse, small numbers of primitive wanderers who knew little or nothing of Angel Mounds’ former glories. By 1450, the place was deserted and unoccupied.
Frank Joseph

“Advanced Civilizations of Prehistoric America contains much tinder for the fires of controversy regarding pre-Columbian civilizations that rose, flourished, and fell in North America. Frank Joseph has written a startling book with much evidence to consider. The book you’re holding sifts through the evidence in an easy-to-understand manner. Read this book with an open mind and you’ll begin to see our history in a much different way.”

“No one brings American prehistory alive like Frank Joseph.”

– Philip Coppens, author of Servants of the Grail

" . . . the evidence is compelling and presented in a way that is informative and engaging. It is not a dry, boring academic work. . . . Read it and decide for yourself if Mr. Joseph's conclusions hold up. If nothing else, it will help you learn to think outside the box."

"The author, who has written four other books and is editor of Ancient American magazine, suggests that a study of these early kingdoms, all of which died out because of internal decay and reliance on limited resources, might serve as cautionary tales for our present day. His carefully researched details, together with his bibliography of over 300 sources, will appeal to readers and researchers interested in accounts of early advanced civilizations often omitted from standard historical study."

"Frank Joseph's book is an eye-opener for its documentation of these lost cultures and their legacies. It's also a cautionary tale with implications for our own survival."