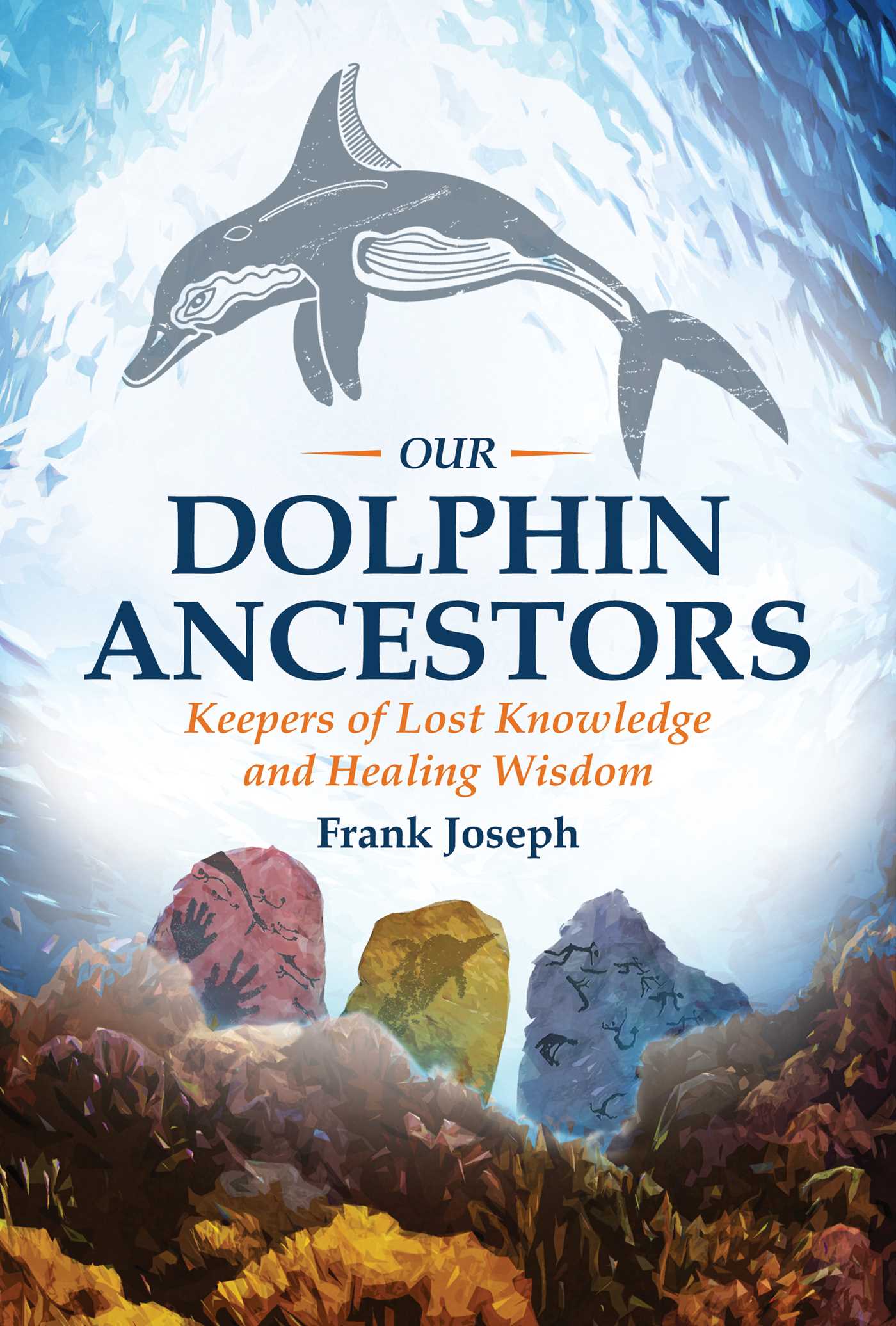 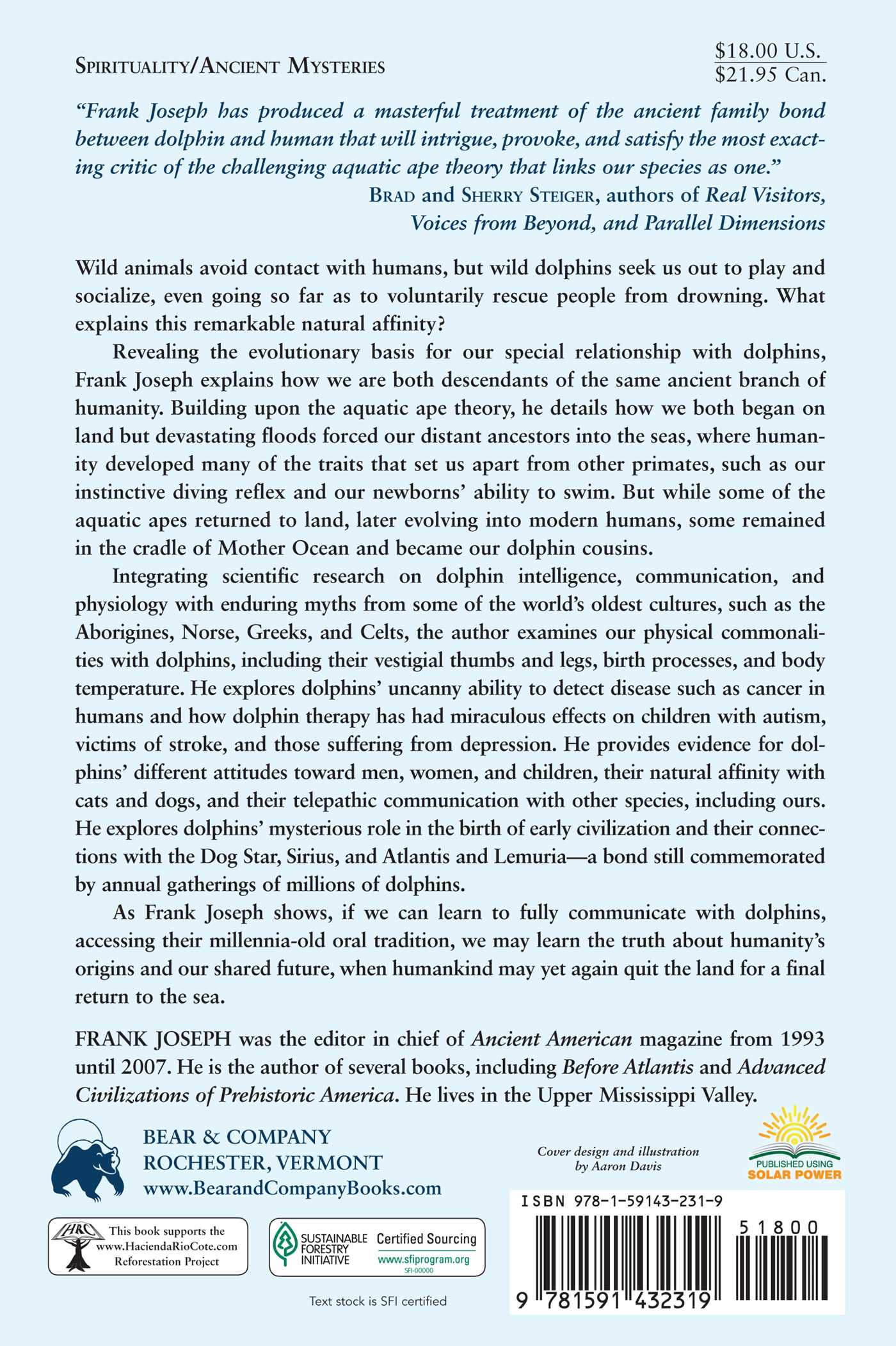 • Explores dolphins’ communication with other species and how dolphin therapy has miraculous effects on people with autism, cancer, stroke, and depression

• Explores the connections between dolphins and Atlantis and Lemuria

Wild animals avoid contact with humans, but wild dolphins seek us out to play and socialize, even going so far as to voluntarily rescue people from drowning. What explains this remarkable natural affinity?

Revealing the evolutionary basis for our special relationship with dolphins, Frank Joseph explains how we are both descendants of the same ancient branch of human-ity. Building upon the aquatic ape theory, he details how we both began on land but devastating floods forced our distant ancestors into the seas, where humanity developed many of the traits that set us apart from other primates, such as our instinctive diving reflex and our newborns’ ability to swim. But while some of the aquatic apes returned to land, later evolving into modern humans, some remained in the cradle of Mother Ocean and became our dolphin cousins.

Integrating scientific research on dolphin intelligence, communication, and physiology with enduring myths from some of the world’s oldest cultures, such as the Aborigines, Norse, Greeks, and Celts, the author examines our physical commonalities with dolphins, including their vestigial thumbs and legs, birth processes, and body temperature. He explores dolphins’ uncanny ability to diagnose disease such as cancer in humans and how dolphin therapy has had miraculous effects on children with autism, victims of stroke, and those suffering from depression. He provides evidence for dolphins’ different attitudes toward men, women, and children, their natural affinity with cats and dogs, and their telepathic communication with other species, including ours. He explores dolphins’ mysterious role in the birth of early civilization and their connections with the Dog Star, Sirius, and Atlantis and Lemuria--a bond still commemorated by annual gatherings of millions of dolphins.

As Frank Joseph shows, if we can learn to fully communicate with dolphins, accessing their millennia-old oral tradition, we may learn the truth about humanity’s origins and our shared future, when humankind may yet again quit the land for a final return to the sea.

The Eye of the Dolphin

Of the two methods by which we learn--from others and from personal experience--the latter is by far the more convincing. In December 2013 my wife, Laura, and I were aboard a cruise ship, sailing through the Gulf of Mexico. Among the anticipated highlights of our cruise was an opportunity to experience dolphins up close in neither the wild nor an amusement park, but at a research facility.

Located at an otherwise uninhabited islet just off Roratan, Honduras, this scientifically controlled environment corralled more than thirty dolphins within a shallow barrier of some six square acres where they were studied and devotedly cared for. As part of their daily routine, the dolphins were herded together and taken out to sea to frolic with their friends and relations in the wild for an hour or so before returning to the fenced-in islet. The top of the fence stood so low that all but the most arthritic dolphin could easily jump over it. In fact, several had made good their escape in this manner only to jump back inside a few days later. Perhaps they came back because they regarded the islet as a sanctuary from sharks, enjoyed the flattering attention from scientists and tourists, were bribed by free squid and herring--among their favorite delicacies--or were enticed by all these amenities and more.

At the close of our visit, when even the marine biologists had gone ashore and the dolphins were left alone, I lingered nearby to watch one of their number suddenly dive and moments later emerge holding a large stick in its mouth. This it flaunted enticingly at three or four other dolphins who chased after, trying to snatch the object away. That they engaged in this spontaneous game suggested sincere merrymaking--no one was around to give them commands, applause, or food; they were apparently playing for the sheer fun of it.

When we had first waded into the water, we were immediately met by a female dolphin who allowed us to come quite close, even to touch her. Expecting to feel a hard or at least tough, scaly exterior, I was surprised by her supple, smooth, warm skin--so human-like. But a deeper impression was made by her light brown eyes. Behind the anticipated high intelligence and complex awareness, there was something even more compelling. If, as the old French saying has it, “the eyes are the mirror of the soul,” then her gaze betrayed a core mystery comparable only to a kindred connection. It sparked my suspicion of a wordless knowing beyond understanding, as though my own mind had been somehow confronted with a significant truth too potent for me to really comprehend. This experience was the first time I was in the water with a dolphin.

Famed oceanographer Jacques-Yves Cousteau was no less taken by his first, personal contact with a dolphin. “It was an extraordinary situation,” he confessed, “as though the barrier between man and animal no longer existed. There was some sort of strange understanding between us. It would be very difficult for me to say exactly what our feelings were for one another, but there was undoubtedly something.”

Such an inexpressibly profound impression is not unknown to other people touched by the creature’s singular energy field. “Those who have come very close to dolphins feel it inside themselves, yet cannot explain it,” stated Horace Dobbs, Ph.D., a leading delphinologist. “Exactly what it is remains a mystery. For want of a better word, let us call it spirit of the dolphin.”

From the moment the Roratan dolphin first approached our gaggle of tourists, I could not escape the strong impression--realization, perhaps--that it was very rapidly probing us with the powerful energy of some unseen and inconceivable instrument, psychically scoping us out down to the absolute bottom of our souls, reading everything in our conscious and subconscious minds, yes, judging us--completely and thoroughly--within the matter of a few seconds.

The experience at Roratan triggered the writing of this book, or, at any rate, precipitated the research that eventually crystallized into its pages. I had always felt there was something more to dolphins than the engaging and unanswered questions concerning the animals’ communication skills, intelligence, and behaviors. What particularly fascinated me was the dolphin’s unique relationship with humans. In it may we may find the long-lost cipher to an unspoken, only vaguely felt though persistent, riddle. Its solution might simultaneously reveal a shocking kinship that could throw new light on our own behavior, how we became what we are, and what we are becoming.

In writing about marine biology, I have waded out far beyond my usual depths. And yet, only some of the mysteries I explore here lay within the limited purview of delphinology. There are associated spiritual, even paranormal, issues that are integrally bound in the whole enigma. Melding current physical understandings of dolphins with their metaphysical implications opens a holistic panorama, as unexpected as it is revealing.

Among the revelations that most shocked me was a dolphin embryo photographed by J.G.M. Hans Thewissen, Ph.D., professor of anatomy at the University of Michigan. His imagery of the prenatal dolphin’s vestigial hind limbs shows they are strikingly human in appearance, with clearly defined anthropomorphic thighs, calves, feet, and toes. The flippers also resemble the four human finger bones, an impression deepened when we learn that dolphin ancestors originally had a thumb, which has gone vestigial in maturity but is still clearly visible in the embryo.

What does the pre-birth emergence of these discernibly human traits mean? Answers to that question and others related to our peculiar affinity with dolphins are found in the kind of holistic science offered in the following pages. They are accessible only to readers with the courage to think for themselves and consider unusual possibilities that may lead us into unchartered depths, where the imaginable becomes real and we meet with our own reflection in a dolphin’s eyes.
Frank Joseph

“For years we have been hoping that a book on the subject of human/ dolphin kinship would be written by someone with the credentials to treat this special relationship with our aquatic cousins with the seriousness the subject requires. Frank Joseph has produced a masterful treatment of this ancient family bond between dolphin and human that will intrigue, provoke, and satisfy the most exacting critic of the challenging aquatic ape theory that links our species as one.”

– Brad and Sherry Steiger, authors of Real Visitors, Voices from Beyond, and Parallel Dimensions

“A meticulously researched investigation of dolphins, with reference to ancient and modern encounters, that offers an exciting possibility for the future survival of humanity and the planet.”

“Renowned author Frank Joseph’s newest probe into Earth’s ancient mysteries uncovers a major connection between people and dolphins, something that people close to the sea have often observed in myth and legend. He looks deeply into our common origins and into startling physiological features that we share uniquely. His amazing description of how dolphins can communicate and even heal people demonstrates the interconnectedness and interdependence of life, which humanity is only now beginning to grasp.”

“The amazing Frank Joseph reveals an entirely new link between dolphins and humans and raises questions that, if answered, could resolve some of the most deadly problems on this beleaguered planet and just might save our profoundly troubled species. This book is a truly unforgettable journey.”

“Mesmerizing as the dolphins themselves! Only Frank Joseph, with his expansive global knowledge of history and true origins, could bring this masterpiece together. It is so well researched that it truly calls for a re-education of the public. I was captivated!”

“Joseph explains our biological characteristics that support an early aquatic phase of human development as an ‘aquatic ape.’ The facts are convincing, evolutionary theory is correctly applied, and the implications are fascinating. This thesis deserves media exposure and inclusion in academic curricula.”

“Having personally heard Frank Joseph speak on our mysterious connection to dolphins and the aquatic ape theory with revealing slides, I can heartily recommend his new book. The story is pretty compelling.”

“. . . dolphins have phenomenal telepathic, holographic communication and healing abilities and they interact with many other species. They have assisted autistic children to have more meaningful relationships with people and the world around them, and they have even detected cancers. Dolphins have an oral tradition that humans are only just starting to unravel. Joseph wonders whether in the future we may return to the sea to reunite with our dolphin cousins.”