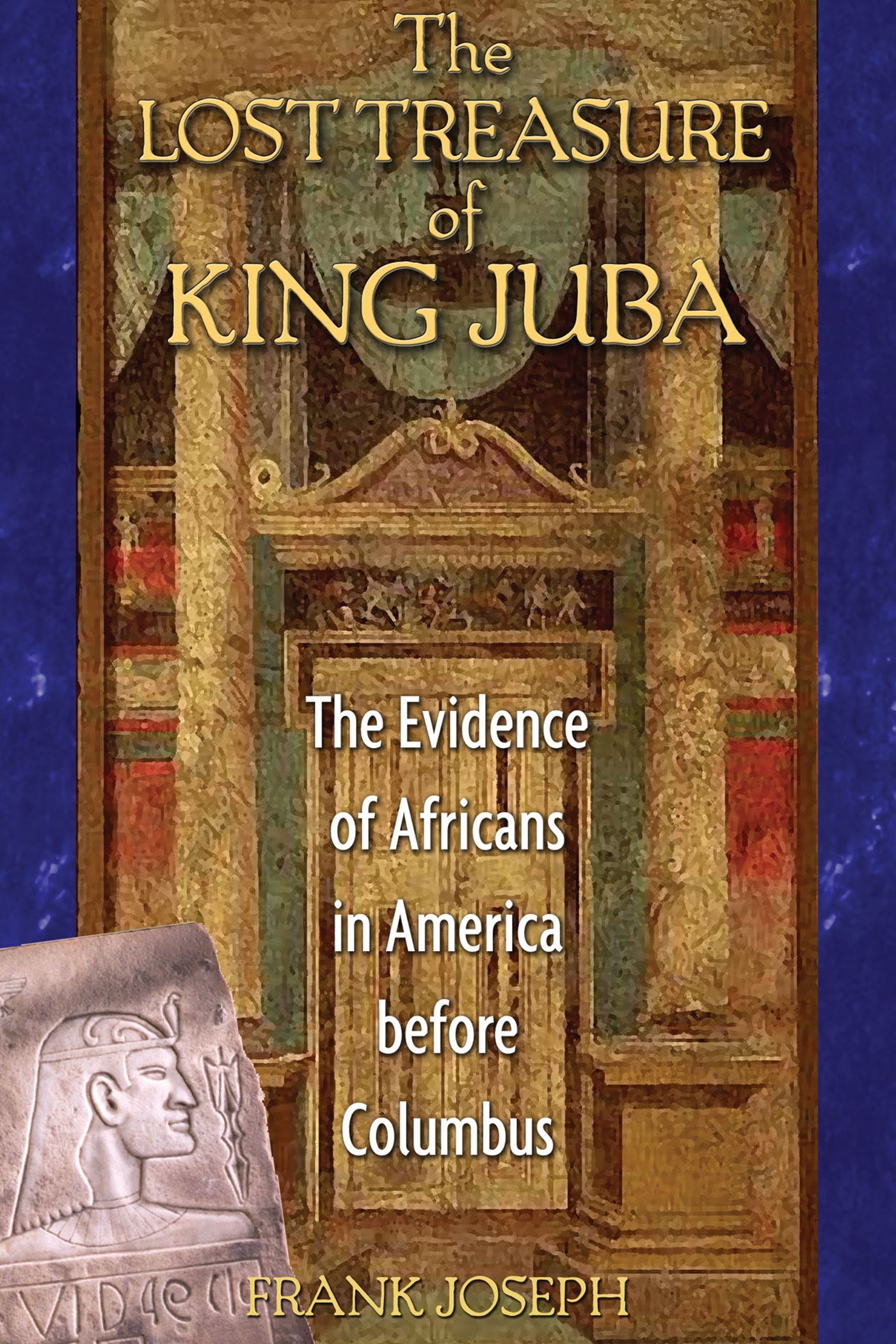 The Lost Treasure of King Juba

The Evidence of Africans in America before Columbus

The story of a mysterious southern Illinois treasure cave and its proof of the presence of Africans in North America long before Columbus.

• Includes over 100 photographs of the artifacts discovered.

• Re-creates the historic voyage of King Juba and his Mauretanian sailors across the Atlantic to rebuild their society in the New World.

• Explains the mystery of the Washitaws, a tribal group of African origin, first encountered by the Lewis and Clark Expedition.

In 1982 Russell E. Burrows, a treasure hunter in southern Illinois, stumbled on a cache of ancient weapons, jewels, and gold sarcophagi in a remote cave. There also were stone tablets inscribed with illustrations of Roman-like soldiers, Jews, early Christians, and West African sailors. These relics fueled a bitter controversy in the archaeological community regarding their authenticity, leading Burrows to destroy the entrance to the cave.

Researching more than 7,000 artifacts removed from the cave before it was sealed, Frank Joseph explains how these objects came to be buried in the middle of the United States. It started with Cleopatra, whose daughter was made queen of the semi-independent realm of Mauretania, present-day Morocco, which she ruled with her husband, King Juba II. Following the execution of their son, Ptolemy, by Emperor Caligula, the Mauretanians rebelled against their Roman overlords and made their way into what is now Ghana. There they constructed a fleet of ships for a transatlantic voyage to a land where they hoped to rebuild their kingdom safe from Roman rule. They took with them a great prize unsuccessfully sought by two Roman emperors: Cleopatra's golden treasure and King Juba's encyclopedic library of ancient wisdom.

Fully illustrated with many previously unpublished photographs of artifacts retrieved from the southern Illinois site, The Lost Treasure of King Juba is a compelling story that could force us to rethink the early history of our nation and the possibility that Africans arrived on our continent nearly fifteen centuries before Columbus.

Regardless of their spiritual beliefs, all of the refugees were under a sentence of death. If the Romans caught up with them, every man would be crucified; their women and children sold into life-long slavery. The circumstances of defeat had not only obliterated their kingdom; it had reduced them to First Century “boat-people”, forced to risk their lives on dangerous seas, rather than certainly lose them by remaining behind on the land. All too conscious of the fate looming in the north, the Mauretanians and their West African co-workers labored ferociously to finish the new ships. There was another urgent consideration: the weather. Spring was waning, and if the fleet was not ready by mid-summer, it would not be able to sail until the following year, too late to escape the doom intended for them. November was the storm season, and the refugees must arrive at their distant destination before then. Otherwise, the prospect of surviving the prolonged voyage in makeshift vessels was bleak. Urgency gave impetus to their efforts, and the hastily completed ships were boarded a few weeks after the summer solstice.
The priests and holy men representing half-a-dozen or more different faiths pleaded with their own versions of God for His blessing on the desperate adventure. The great vessels, heavily laden with passengers and supplies, lurched out over that vast, rolling carpet of the heaving unknown Roman cynicism disparaged as “the Pasture of Fools”. Crowds of West Africans with their uncertain monarch gathered on shore to watch the strange craft carrying their stranger passengers and crews from Mauretania further away toward the west with every foaming plunge. . .
But they had not thrown themselves aimlessly into the Atlantic Ocean just to escape their pursuers. They knew where they were going. Or, at least their navigators did. The sea-faring heritage of Mauretania was already centuries old when King Juba II sent out expeditions to the Canary Islands, even as far as Madeira, in search of murex mollusks for his lucrative purple dye industry. Henceforward, the Classical World referred to these distant shores as the Purpurariae, or “Purple Isles”.
Juba’s great library contained his Punic legacy of sailing instructions to the whereabouts of distant, prosperous locations unknown to the outside world, but jealously regarded by Carthaginian merchants as treasured commercial secrets. Charts drawn from an abundance of such privileged information enabled the captains of the refugee fleet to find their way to what the Roman cartographers vaguely knew as the Epeiros Occidentalis, conjectured continents that most likely lay in the far west, beyond the horizon only suicidal fools dared to seek. Actually, the existence of, if not sailing instructions to both continents had been known for more than two hundred years before, at least. A globe of the world created by the Greek geographer, Crates of Mallos, and preserved for the Romans in the writings of Strabo, identified North America as Peroikoi; South America was Antipodea. . .
While a July-August passage across the tranquil central Atlantic may have been tedious, it was, outside of an isolated storm or two, mercifully uneventful. The point from which the expedition left Africa would have thrust it directly into the Canary Island Current, which flows westward straight across the Atlantic to the opposite side of the ocean. As their ships approached the Gulf of Mexico, however, they arrived during the hurricane season. Some must have been sunk with loss of life. Others were separated and scattered to the coasts of Florida, Mexico and Panama. . .
The main body of immigrant vessels entered the mouth of the Mississippi River, sailing northward into the North American continent. Such a passage would not be possible today. With construction of “wing-dams” in the late 19th Century, but especially after the installation of locks during the 1930s, the Father of Waters’ southward moving current increased to its present seven mile-per-hour flow. . . They undoubtedly pulled into shore from time to time for repairs and other necessities. At such landing intervals, foraging parties hunted game and brought back edible fruits. It was then that the vital presence of so many armed troops who accompanied the expedition was apparent. Various indigenous groups encountered along the way made mostly furtive appearances, keeping their distance from the awesome strangers. Often there were ambushes, surprise assaults. . .
Not all Indian encounters resulted in violence, however. Some tribes showed more of an inclination to barter than fight, and friendly relations with several river peoples were established. Among these the West Africans attracted special notice for their skin color, in the same way unusual or unfamiliar personal traits were regarded as the sure signs of wanaka, or spiritual power. Many blacks jumped ship, preferring to settle where they were wanted, rather than entrusting themselves to the less certain destiny of the white foreigners they served . . . Evidence of their decision to abandon the other refugees survives among a numerically insignificant population of native blacks known today as the Washitaw. They were described as an indigenous people by the renowned explorers, Lewis and Clark, in 1797. . .
While some of their West African deck-hands were jumping ship, the Mauretanians continued to push toward the north in a prolonged expedition that took almost as long as their transatlantic crossing. When they at last reached the Mississippi River’s confluence with the Ohio River, autumn was spreading its swirling colors over the Earth. The newcomers were not the first to visit this spectacularly raw wilderness. They had been preceded centuries before by Phoenician path-finders who came in search of the rare goods that once made their Carthaginian capital the richest city in the world. Their detailed exploratory knowledge of the “Opposite Continent”, cited as long ago as the 4th Century B.C. by the Greek philosopher, Plato, in his dialogue, the Kritias, was classified information. . .
Steering east into the Ohio River, the refugee fleet cruised around the bottom of what would millennia later become the State of Illinois. . .

"Frank Joseph provides an inheritently interesting and iconoclastic discourse on the evidence of Africans in America before Columbus."

"Joseph's new book puts it all together. He gives an historical background of the people who are the cave's history."

“Here is both a fascinating chronicle of one of history’s greatest treasure stories and a paradigm-shattering tale of a pre-columbian expedition to the New World. No one interested in the real story of America’s prehistory can afford to ignore this book.

"If you enjoy a good non-fiction mystery, a kind of arm chair treasure hunt, and are a bit of a closet archaeologist or a medievalist to boot, this is a book for you. Fascinating reading."

The Lost Treasure of King Juba

The Evidence of Africans in America before Columbus