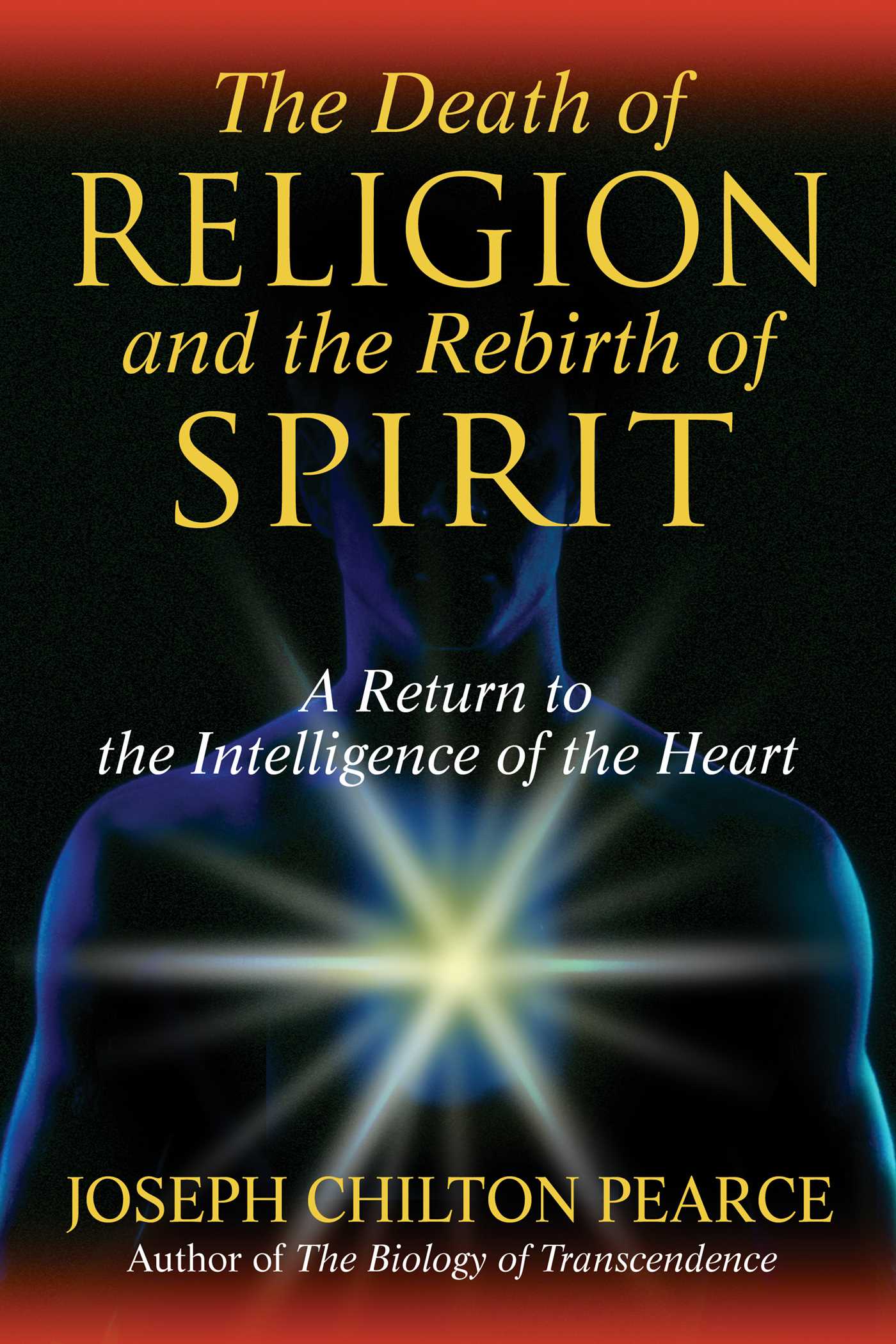 • Refutes the Neo-Darwinist assumption that violence is inherent in humanity

• Identifies religion as the sustaining force behind our negative cultural imprinting

We are all too aware of the endless variety of cruel and violent behavior reported to us in the media, reminded daily that in every corner of the world someone is suffering or dying at the hands of another. We have to ask: Is this violence and cruelty endemic to our nature? Are we, at our foundation, really so murderous? In The Death of Religion and the Rebirth of Spirit, Joseph Chilton Pearce, life-long advocate of human potential, sounds an emphatic and convincing no.

Pearce explains that beneath our awareness, culture imprints a negative force-field that blocks the natural rise of the spirit toward its innate nature of love and altruism. Further, he identifies religion as the primary cultural force behind this negative imprinting. Drawing from recent neuroscience, neurocardiology, cultural anthropology, and brain development research, Pearce explains that the key to reversing this trend can be found in the interaction between infants and adults. The adult mind-set effectively compromises the infant’s neural and hormonal interactions between the heart and the higher evolutionary structures of the developing brain, thus keeping us centered primarily in our most primitive and defensive neural foundations, generation after generation. Pearce shows us that if we allow the intelligence of the heart to take hold and flourish, we can reverse this unconscious loss of our true nature.

The Death of Play and the Birth of Religion

In 1975, while working on my third book, Magical Child, a school teacher asked how he was supposed to teach children anything and prepare them to face the hard reality of life when all they wanted to do was play. I was working on the book’s chapter on play and looked for some authority I could quote to defend or justify what so many saw as a waste of time. I knew this teacher’s “hard reality” was a fiction made real by eliminating play. I realized that all I had wanted to do as a child was play or be told stories, and all my own children had wanted was to play or be told stories.

Play is the very reason for life, the reason why nature built such a lifelong compulsion into us to play every chance we get. Play is life living itself, nature celebrating herself, with no explanation or need for justification. We are born to play. The church comes along with some annual mea-culpa day of solemnity, sack-cloth and ashes, and we turn it into a carnival; the night before All Souls’ Day becomes the celebration of Halloween, with its pranks and mischief; Christmas becomes Rudolph the Red-Nosed Reindeer and jingle-bells; Easter becomes bunnies and new bonnets.

From the moment of conception, life expands through bonds of belonging, pleasure, and joy. Relating with each other and the earth is play. The more complex the organism, the higher its intelligence and the more complex its play of relationships, with the highest of all being the ever-unfolding expressions of love. Play expresses life’s love of itself, the highest moral imperative.

THE IMPORTANCE OF PLAY IN RELATIONSHIPS AND LEARNING

Early on, the infant plays with the nipple, plays peek-a-boo with that benign face up there--indeed, with great delight it plays at everything, knowing of nothing but play (until we set about to adjust it to reality and teach it to take life seriously). In play, every action is a learning, our brain free to imprint without censure or pressure. Under any such pressure, energy shifts back to the hindbrain, making forebrain actions such as learning difficult.

Mothers and infants bond in play--we need only listen to a mother’s silly, high-pitched baby talk (produced by mothers worldwide, according to Alfred Tomatis’s studies) and the infant’s squeals of reflected pleasure. Primary mother-infant bonding assures affectionate-sexual love in the adolescent and adult. Loving, playful relationship that extends to society, the living earth, and creation itself is our natural state.

Playful relationship also establishes the context for all learning and development, and because learning and developing are the underlying survival instincts built into us, play is a survival instinct as well. This is what the infant, child, and adolescent wants to do and takes such joy in--if allowed. Through the ongoing mirroring of relationship within ever-widening matrices, children discover and define who they are and what their place in the world and, ultimately, the universe might be. Through the nature and quality of the mirrored relationship between individual and parent and then between individual and society is determined what is learned, which capacities are developed, and even what is remembered.

Joy and pleasure are the bricks and mortar of physical, psychological, social, and spiritual development, and the developing brain must experience joy and pleasure if the complex integration of sensations is to take place. In those first three years or so an infant-child denied joy and pleasure, touching, caressing, and movement, develops a brain that is “neurodissociative,” as James Prescott explains, one that fragments rather than integrates experience. The same critically holds true at puberty and adolescence. Eliminate the safe space of pleasure and joy, acceptance and nurturing, and this expansive, integrated exploration of the world is curtailed and impeded. As a result, the adolescent regresses or dissociates into self-defensiveness, with its implicit violence that will finally surface as domination of others or be internalized as neurosis, illness, or suicide. The emotionally malnourished child may also experience an intensified sexuality at adolescence to compensate for an impoverished sensory-emotional system, but this sexuality is devoid of affection or love, is often violent and destructive, and is hardly conducive to family and nurturing of offspring, should any ever come to be.

THE ORIGINS OF RELIGION

A fundamentalist Christian, a seemingly bright woman with a Ph.D., explained to me at length that it was our duty as adults to break the will of infant-children, teaching them to obey in order that they, having then no will of their own, could be open to God’s will and be obedient to him. If we fail to do this, she said seriously, and leave the child willful, both the child’s soul and the adults’ souls are imperiled and we face the risk of hell. So much for a loving God! Books urging corporal punishment from at least the fifteenth month on have been and still are bestsellers. “Spare the rod and spoil the child” has a long lineage, but we might change the phrase to “Spare the rod and spoil the corporate world that relies on such ‘broken’ children for laborers and our Pentagon that needs them as their fodder for wars.” Without that rod, an actual individual might appear--a danger to culture itself.

A university professor I knew, a preacher in his early years, wrote a brilliantly researched book on what he considered a major error of history: monotheism. My friend’s history showed that as long as any social group or individual could freely discover God within themselves and their world and work out whatever relationship seemed to flow, peace reigned. But when the notion of one God came along--a jealous, violent male God to boot--it wrecked everything, resulting in “Your God and mine can’t both be the true one, so one of us has to go!” Thus the battle begins.
Joseph Chilton Pearce

“Once again, Joseph Chilton Pearce’s genius and deep, essential humanity illuminate the most meaningful and important issue of our day--our relationship with Spirit and the all-too-often-toxic history and motivations of organized religion.”

“Joseph Chilton Pearce astounds with his ability to so clearly see and courageously state the most basic reason for chaos in the world--the closing down of inspirational love that can only come through heart-awareness. His piercing depiction of this dire state as due to the destructiveness of culture and religion is followed with an even more penetrating set of solutions, founded on insights into biological development, nurturing, and opening the heart to the future possibilities of love unconfined. The message has not been so clear since William Blake spoke of ‘Jesus, the Imagination.’”

– Robert Sardello, author of Love and the World and Silence

“In this remarkable book Joseph Chilton Pearce goes to the very memetic ‘DNA’ of our culture and recodes it to affirm life’s potential. He masterfully helps us to release the destructive aspects of religion and modern society, while affirming the magnificent reality of the spirit and the heartful intelligence that can guide us forward.”

– Barbara Marx Hubbard, president of the Foundation for Conscious Evolution

"This book convincingly indicts cultural imprinting as the cause of humankind's cruel and violent behavior. Pearce's call to hope is much needed in a world turning ever more violent."

". . . [Pearce] shows what steps we can take to align ourselves with what is intended for the full development of the human being."

"Reading [this book], allegorically, feels like lifting a boulder from one's very soul. This is one of the most relevant books of our time. . . . a stunning achievement. Do your Mind a favor & read this book!"

"Rarely has there been a book that opened my mind and heart so deeply as this courageous and astonishing book."

" . . . a serious search for the soul of humanity by one of our most seminal thinkers."

"It's a pick recommended for any spirituality collection that delves deeply into the need of change and lack of violence, particularly at the college level."

" . . . Pearce is surely right that we must ourselves harness the creative energies and apparently limitless potential of universal mind and not put off nurturing ourselves and our brethren until tomorrow lest we kill our spirit with religious fantasies of saviours who save those who don't help themselves."

– The Scientific and Medical Network, Spring 2008