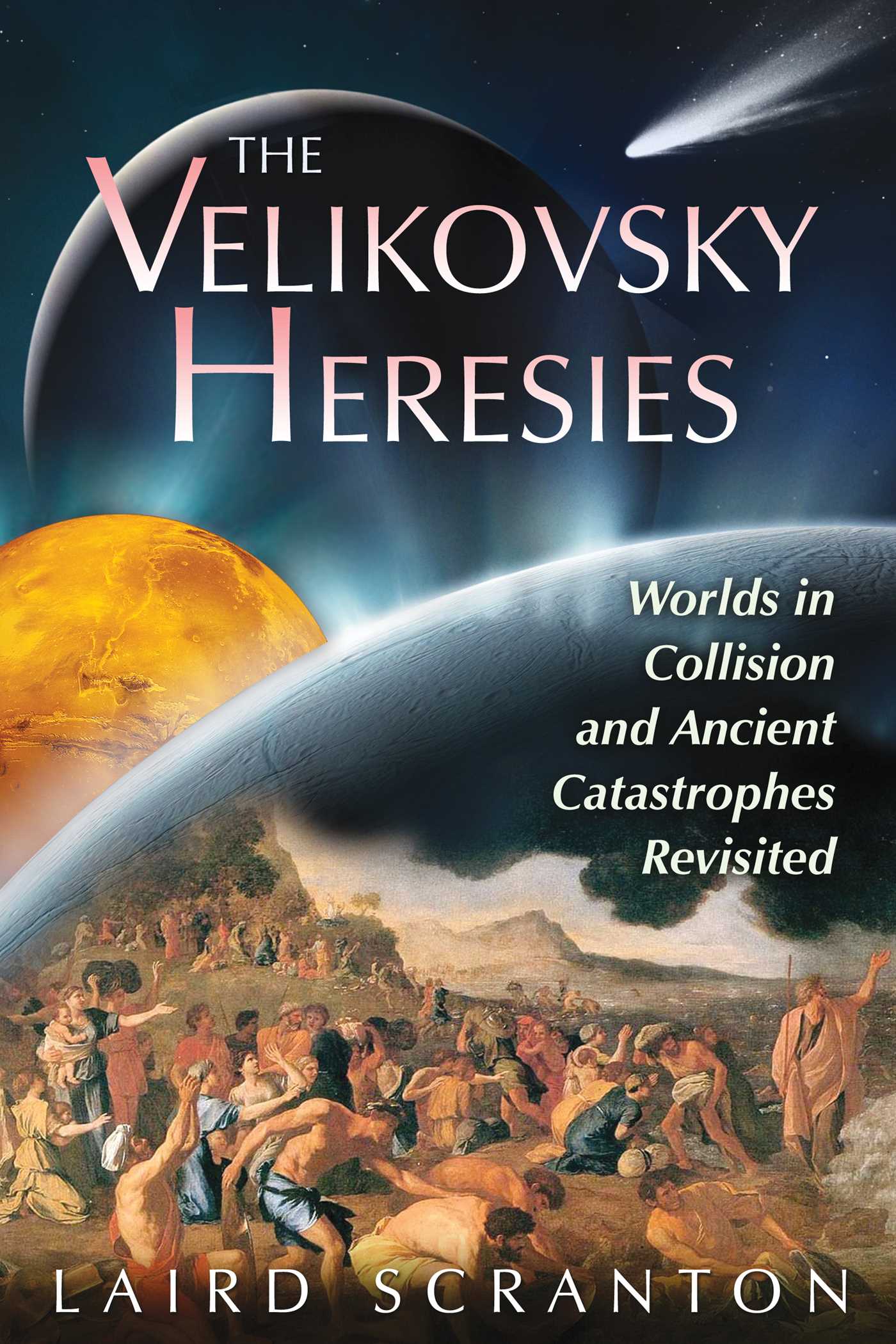 By Laird Scranton
LIST PRICE $12.99
PRICE MAY VARY BY RETAILER

• Presents recently translated ancient texts from China, Korea, and Japan that uphold the cometlike descriptions of Venus cited by Velikovsky

• Offers scientific explanations for many disputed aspects of Velikovsky’s theories, such as how Venus could have transformed from a comet into an orbiting planet

Surrounded by controversy even before its publication in 1950, Immanuel Velikovsky’s Worlds in Collision introduced the provocative theory that Venus began as a brilliant comet ejected by Jupiter around 1600 BCE, wreaking chaos on Mars and Earth as it roamed through our solar system prior to settling into its current orbit. Immediately dismissed without any investigation and subject to vicious attacks, Velikovsky’s theory is now poised for reexamination in light of recent astronomical and archaeological findings.

Exploring the key points of Velikovsky’s theories, Laird Scranton presents evidence from recent space probe missions to show that Venus still exhibits cometlike properties, such as its atmospheric composition, and could be a young planet. Reviewing the widespread cometlike descriptions of Venus from 1500 BCE to 750 BCE as well as Velikovsky’s observation that no records of Venus exist prior to 1600 BCE, Scranton reveals recently translated ancient texts from China, Korea, and Japan that further uphold Velikovsky’s theories. Examining evidence of major geomagnetic and climate-change events around 1500 BCE and 750 BCE, corresponding with close passes of the comet Venus and its impact with Mars, the author offers scientific explanations for many disputed aspects of Velikovsky’s theories, such as how Venus transformed from a comet into an orbiting planet. By updating this unresolved controversy with new scientific evidence, Scranton helps us to understand how it was that Worlds in Collision was the one book found open on Albert Einstein’s desk at the time of his death.

Discussion of the possible importance of electromagnetic effects in the solar system dominated a longtime correspondence between Immanuel Velikovsky and Albert Einstein, which began in 1946 and continued until Einstein’s untimely death in 1955. The question of what role electromagnetism might play in the interaction of astronomic bodies had potential bearing on Einstein’s search for a unified field theory. Nonetheless, Einstein resisted Velikovsky’s ideas, even when directly approached by Velikovsky in June of 1954 to use Einstein’s influence to have Jupiter surveyed for radio emissions--a request that Einstein effectively deflected.

However, as good fortune would have it for Velikovsky, soon after--on April 5, 1955--two astronomers from the Carnegie Institute (B. F. Burke and K. L. Franklin) who had no apparent knowledge of Velikovsky’s suppositions regarding Jupiter, announced the chance detection of radio signals from Jupiter. With this news, a somewhat embarrassed Einstein reversed his opinion, dropped his resistance to Velikovsky’s proposal, and instructed his secretary to authorize--in Einstein’s name--any test that Velikovsky might wish to have conducted. Thirteen days later, on April 18, 1955, Einstein was found dead--the victim of a ruptured aortic aneurysm. At the time of his death, it was reported that the one book found open on his desk was Velikovsky’s Worlds in Collision.

Closely related to Velikovsky’s suggestion that electromagnetism must play a significant role in dynamics within the solar system was the suggestion that Earth must exert a magnetic influence that extends out into space as far as the moon. Velikovsky further outlined this idea in a 1956 memorandum to the American Committee for the International Geophysical Year. A few years later in 1958 James Van Allen announced and was ultimately credited with the discovery of the magnetosphere.

Another of Velikovsky’s early predictions in regard to Venus was that, if Venus were a relatively new astronomic body--one that had “blazed brightly” and “rivaled the sun in brightness in the daytime sky,” according to some ancient sources--then it must be found to be quite hot still--nearly molten, according to Velikovsky. At the time of Velikovsky’s statement, the clouded surface of Venus was known to be -25 degrees centigrade on both the day and night sides, so Velikovsky’s view could hardly have been called a “safe bet” based on then conventional wisdom.

In 1954 N. A. Kozyrev observed an emission spectrum from the night side of Venus but ascribed it to discharges in the upper layers of its atmosphere. He calculated that the temperature of the surface of Venus must be +30 degrees C; somewhat higher values were found earlier by Adel and Herzberg. As late as 1959, V. A. Firsoff arrived at a figure of +17.5 degrees C for the mean surface temperature of Venus, only a little above the mean annual temperature of Earth (+14.2 degrees C). Nonetheless, in support of Velikovsky and in contradiction to the prevailing astronomic view, late in 1962 and early in 1963, the Mariner 2 probe showed the actual surface temperature of Venus to be 800 degrees--hot enough to melt lead.

As a consequence of these early points of seeming vindication for Velikovsky, at around this same time, one of the few public acts of professional recognition for Velikovsky’s correct predictions occurred. Two leading academics (Valentine Bargmann of the Princeton University Department of Physics and Lloyd Motz of the Columbia University Department of Astronomy) wrote a letter to Science Magazine to acknowledge Velikovsky’s priority on these points and to urge that his other conclusions be objectively reconsidered--this in spite of their own stated misgivings about Velikovsky’s broader theories.

Other of Velikovsky’s advance claims seem to have been beyond the ability of twentieth-century science to either confirm or deny and so could not be subject to immediate resolution. Some of these involved questions whose answers turned on evidence that would not be gathered until future probes were sent into space during the first decade of the new century. Both Velikovsky’s defenders and detractors would have to satisfy themselves to be patient until future evidence could be brought to bear.

Despite these seeming successes, most scientists remained wary of offering public support to Velikovsky. Even one of Velikovsky’s most steadfast friends, Harry Hess--then chairman of the Space Board of the National Academy of Science--wrote to Velikovsky in 1963:

We are philosophically miles apart because basically we do not accept each other’s form of reasoning--logic. I am of course quite convinced of your sincerity and I also admire the vast fund of information which you have painstakingly acquired over the years.

I am not about to be converted to your form of reasoning though it certainly has had successes. You have after all predicted that Jupiter would be a source of radio noise, that Venus would have a high surface temperature, that the sun and bodies of the solar system would have large electrical charges and several other such predictions. Some of these predictions were said to be impossible when you made them. All of them were predicted long before proof that they were correct came to hand. Conversely I do not know of any specific prediction you made that has since been proven to be false. I suspect the merit lies in that you have a good basic background in the natural sciences and you are quite uninhibited by the prejudices and probability taboos which confine the thinking of most of us.

Whether you are right or wrong I believe you deserve a fair hearing.
Laird Scranton

“Scranton reminds us of Velikovsky’s contribution to our ideas about our solar system, and he hints at what else may be confirmed in the future.”

By Laird Scranton
LIST PRICE $12.99
PRICE MAY VARY BY RETAILER