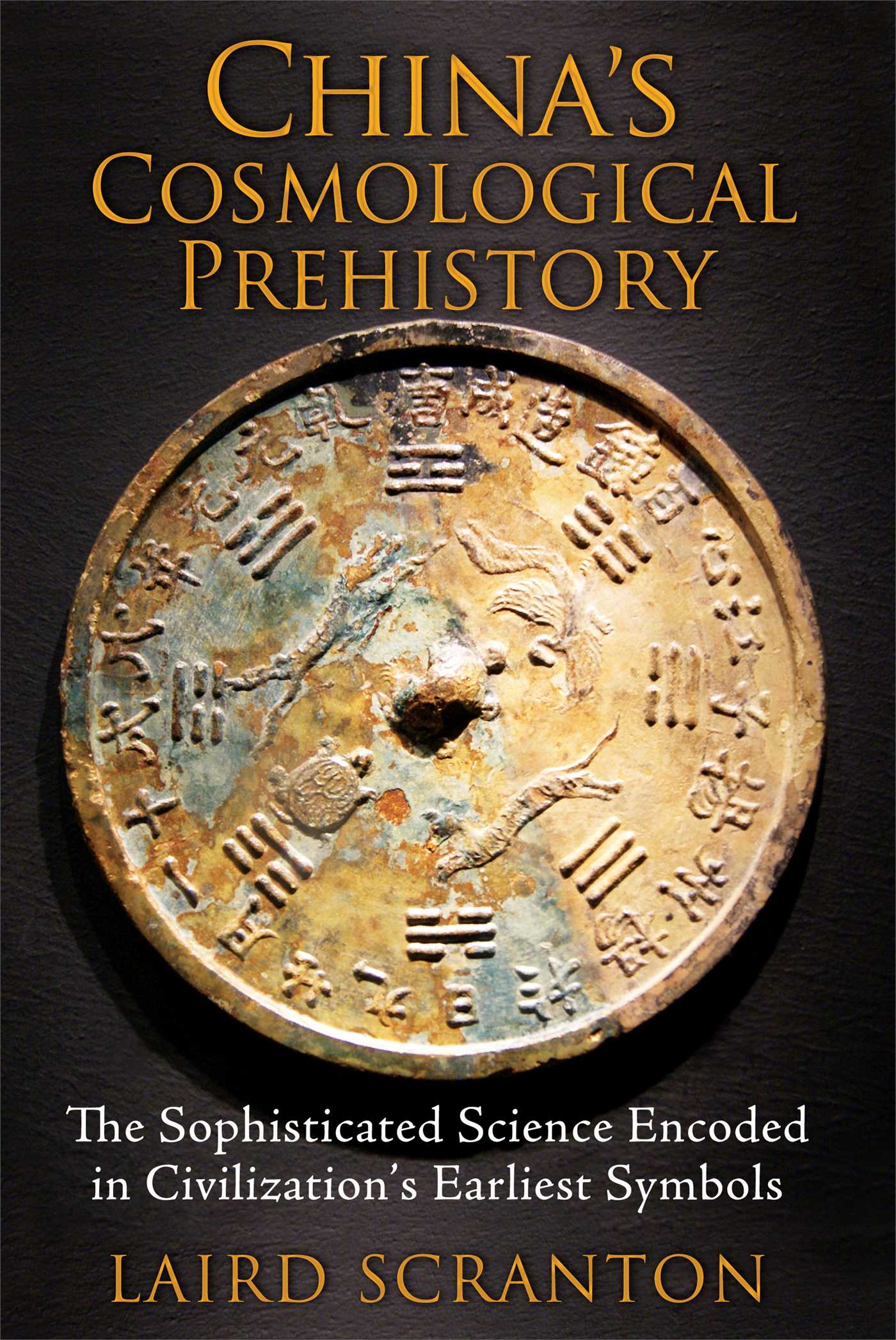 • Explores the 8 stages of creation in Taoism and the cosmological origins of Chinese ancestor worship, the zodiac, the mandala, and the I Ching

Building on his extensive research into the sacred symbols and creation myths of the Dogon of Africa and those of ancient Egypt, India, and Tibet, Laird Scranton investigates the myths, symbols, and traditions of prehistoric China, providing further evidence that the cosmology of all ancient cultures arose from a single now-lost source.

Scranton explores the fundamental similarities between the language that defined ancient Chinese cosmology and that of other creation traditions, revealing the connections between the phonetic structure of the words, their glyphs, and their use. He demonstrates striking parallels between the earliest systems of writing in China and the hieroglyphs of ancient Egypt. He examines the 8 levels of creation in Taoism and the cosmological origins of Chinese ancestor worship, mythical emperors, the zodiac, the mandala, and the I Ching. He details the fundamental principles of land-use in ancient China in relation to the symbolism of a Buddhist stupa and the Dogon granary, ritual shrines that are also the central symbol of other creation traditions. Understanding the true meanings of these symbol complexes also reveals the sophisticated scientific understanding of these ancient cultures, for these creation symbols directly correlate with our modern understanding of atoms and the energetic makeup of matter.

In exploring Chinese cosmological traditions, Scranton sheds new light on the contention that the sacred knowledge of the ancients is the legacy of an earlier culture who gave primitive humanity the tools they needed to birth the first known civilizations.

Chapter 4
The Chinese Concept of the Mulberry Tree

In China, the mythological tale of the Ten Suns and the archer Yi, who shoots down nine of the suns, is also a source for the mythical Mulberry Tree. The Mulberry Tree, or Fu Sang, is obliquely defined as a kind of “spirit tree” from which the “suns go out,” or that somehow provided “support” for the suns. The tree was said to reach down into the watery underworld or to originate in a whirlpool of water. In China, the tree is alternately called the Fu Mu--a term that immediately calls to mind an Egyptian word Mu that is sometimes seen as a counterpart to the Dogon concept of Nu in references to the primordial waters.

In the Egyptian hieroglyphic language, the Mulberry Tree is expressed by two words, and a symbolic reading of each suggests that their meanings relate to how the bending or warping force of gravity causes waves to evolve in the shape of a spiral that is responsible for the formation of mass. This spiral would be comparable to the one associated with the Dogon egg of the world. However if we apply our symbolic method of reading Egyptian hieroglyphs, it becomes clear that the first of these words, pronounced Merit, meets our criteria for a defining word--a word whose glyphs symbolically define a concept that is to be associated with its unpronounced trailing glyph. In this case, the trailing glyph consists of the figure of a tree that is overlaid with the figure of a branch, and so might reasonably convey the symbolic meaning of “branch of a tree.” This image, which agrees with statements given within the Chinese myths themselves, leads us to think that one purpose of the mythical concept of the Mulberry Tree might be to draw our attention to the branches.

Egyptian words for “branch” are written with symbols that we associate with the processes of the formation of matter. These include the image of a fish, which we interpret within Dogon cosmology to symbolize the processes by which waves come to be transformed into mass or matter following an act of perception. These symbols include the spiral shape that in the Dogon creation tradition is understood to inscribe the endpoints of the egg’s seven rays, which are said to be of increasing length. It is by way of this symbolism that the shape of the spiral comes to characterize the egg of the world. The symbols include the hemisphere glyph that we take to symbolize mass or matter, and they also include the Egyptian three-stemmed plant glyph that, in our view, symbolizes the tree of life and the three Worlds of matter.

There is only one variety of Mulberry Tree that is native to China: the White Mulberry, or Morus alba.

If we follow the linguistic and mythic hints given in the Chinese Mulberry Tree myth that seem to relate to the formation of matter and explore the scientific concept of branches as it relates to string theory, the immediate idea that presents itself is the concept of the fundamental lemma. This is a belief drawn from number theory, which holds that any system that can be derived mathematically rests on a foundational theorem. Although this seems like a relatively straightforward concept, it is one that actually took several decades to positively demonstrate through mathematical proof.

One of the simplest examples of a mathematical concept that can be expressed in terms of a fundamental lemma is the act of counting from one to ten. The Chinese myth of the ten suns, in which the archer Yi is said to shoot nine of the suns from the sky--leaving only the tenth--can be seen as symbolically illustrating, within the narrative of a mythic storyline, the concept of counting from one to ten.

In string theory, formulas are used to define how matter will behave in its wavelike form, to predict the likely attributes of the Calabi-Yau space, to calculate the sizes and masses of various fundamental particles, and to extrapolate how matter then emerges from its various component elements. In other words, just as the Mulberry Tree symbolism states, the concept of the fundamental lemma applies to the First World of matter as waves, to the Second World of the Calabi-Yau space, and to the Third World of matter as we perceive it. Ultimately, these structures uphold and support the concept of time, concepts symbolized in the written languages of various cultures by the sun glyph.

If we imagine an ancient teacher looking for an object in nature to symbolize the complex concept of the fundamental lemma of matter, the branch of the Mulberry Tree seems like a fairly inspired choice. Furthermore, we can see that the leaves of the Mulberry Tree can sometimes take the shape of a stylized profile of birds. Meanwhile, the round, unopened buds of the White Mulberry tree present an image that calls to mind the Chinese and Egyptian sun glyph itself.
Laird Scranton

“China’s Cosmological Prehistory takes the next step in comparing the creation traditions of ancient cultures. In it, Scranton demonstrates how cross-cultural comparisons can lead us to new insights about the possible meanings of obscure ancient myths and symbols.”

– Walter Cruttenden, author of Lost Star of Myth and Time

“Yet another important piece to Scranton’s ongoing quest to prove that a near identical cosmology was common knowledge around the entire globe in ancient prehistory. Perhaps the ‘single language’ posited in the Book of Genesis, the ‘language’ that once ‘united all mankind,’ was not mere fabrication and/or wishful thinking after all. It was cosmology as Scranton again demonstrates.”

“Laird Scranton’s research into cosmological historical frameworks is profound, diligent, and meticulous. Not only does he unveil the underpinnings of significant lexicons and high science, but he reveals how they weave synchronicities and commonalities across unexpected demographics in a pioneering way. The sensational revelation is at the very least a common original source. In China’s Cosmological Prehistory another awe-inspiring wealth of realization is brought to the forefront with an academic style and unique perspective. Undoubtedly, the importance of Scranton’s continued work and research in this book and previous works will be revered by future generations of researchers.”