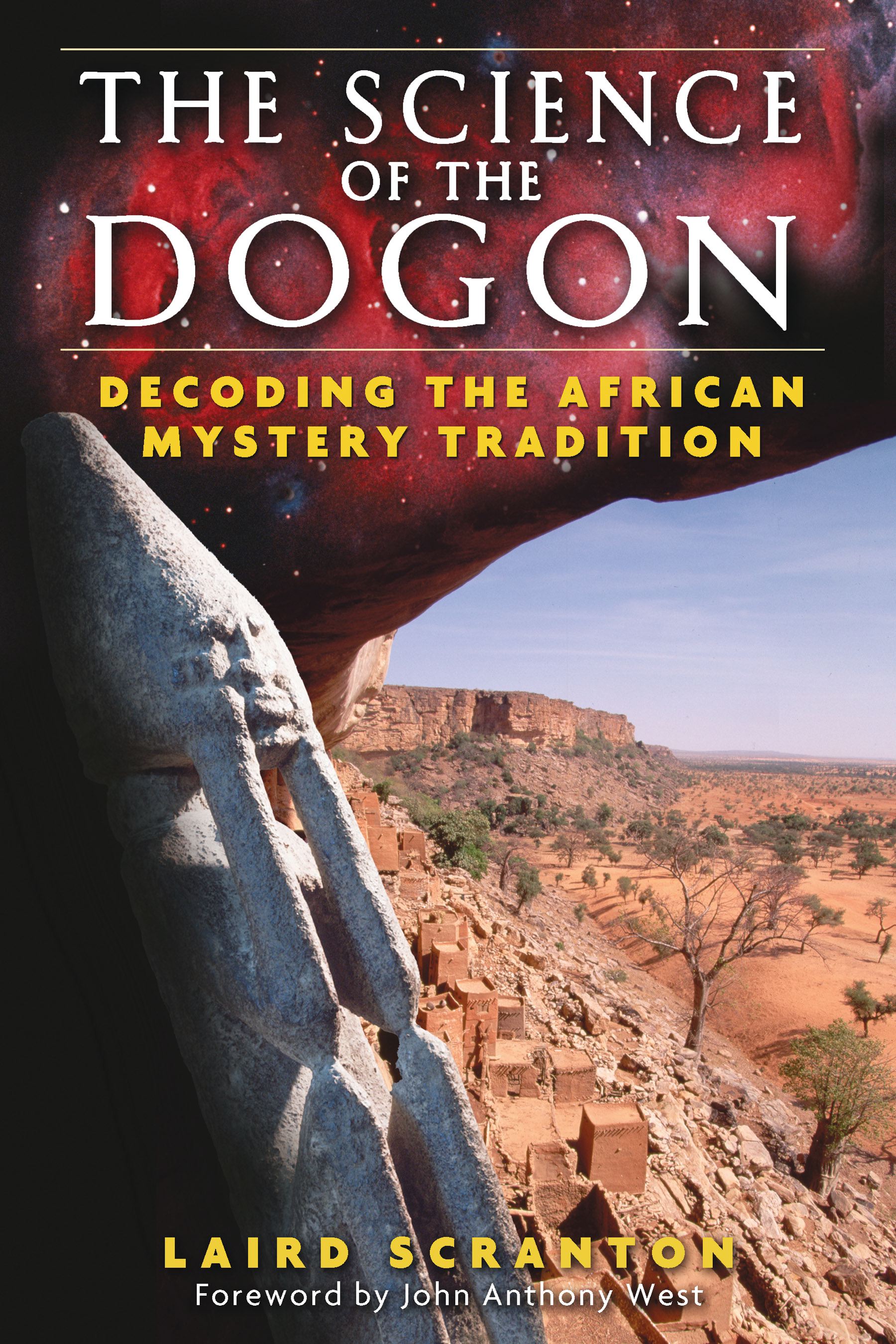 The Dogon people of Mali, West Africa, are famous for their unique art and advanced cosmology. The Dogon’s creation story describes how the one true god, Amma, created all the matter of the universe. Interestingly, the myths that depict his creative efforts bear a striking resemblance to the modern scientific definitions of matter, beginning with the atom and continuing all the way to the vibrating threads of string theory. Furthermore, many of the Dogon words, symbols, and rituals used to describe the structure of matter are quite similar to those found in the myths of ancient Egypt and in the daily rituals of Judaism. For example, the modern scientific depiction of the informed universe as a black hole is identical to Amma’s Egg of the Dogon and the Egyptian Benben Stone.

The Science of the Dogon offers a case-by-case comparison of Dogon descriptions and drawings to corresponding scientific definitions and diagrams from authors like Stephen Hawking and Brian Greene, then extends this analysis to the counterparts of these symbols in both the ancient Egyptian and Hebrew religions. What is ultimately revealed is the scientific basis for the language of the Egyptian hieroglyphs, which was deliberately encoded to prevent the knowledge of these concepts from falling into the hands of all but the highest members of the Egyptian priesthood. The Science of the Dogon also offers compelling new interpretations for many of the most familiar Egyptian symbols, such as the pyramid and the scarab, and presents new explanations for the origins of religiously charged words such as Jehovah and Satan.

Dogon Parallels to the Big Bang and Atomic and Quantum Structure

For the Dogon, the starting point for the deeper storyline is Amma’s egg--the unformed universe that contained all of the seeds or signs of the world. According to Dogon mythology, it was the opening of this egg that created all of the spiraling galaxies of stars and worlds. This concept of the origin of the universe conforms nicely to the prevailing theories of astrophysics, which define the unformed universe prior to the Big Bang as a kind of ball containing all of the potential matter of the future universe compressed to an unbelievably dense state. Accordingly, it was the rupturing of this ball that ultimately scattered matter as we now know it to the farthest reaches of the universe.

According to most astronomers, the “perfect unity that existed at the moment of the Big Bang”--science’s equivalent of Amma’s egg--represented a singularity, like what we now know as a black hole. Stephen Hawking describes the concept of a black hole in the following way in A Brief History of Time:

According to the theory of relativity, nothing can travel faster than light. Thus if light cannot escape, neither can anything else; everything is dragged back by the gravitational field. So one has . . . a region of space-time from which it is not possible to escape to reach a distant observer. . . . Its boundary is called the event horizon and coincides with the paths of light rays that just fail to escape from the black hole.

The diagram provided by Hawking to describe this event horizon--the path of the light rays that are unable to leave the black hole--is in most respects the very image of the Dogon stone representing Amma’s egg.

In many early mythologies, such as those of Hermopolis in Egypt and the Maori of New Zealand, the original creation of the universe is linked to the opening of an egg. The first entities to emerge after the moment of creation are the familiar triad of gods that we previously associated with the three physical states of water. Scientists believe that the plasma that emerged from the Big Bang was intensely hot and cooled rapidly to the near-zero temperature that we now see in the vacuum of space.

Astronomic theory explains that the first finished by-product of this cooling process after the Big Bang was the atom, and more specifically the hydrogen atom--the Dogon surface storyline’s counterpart to the Nummo. Again, if our understanding of the structure of the Dogon religion is correct, we would expect the deep creation storyline to include specific information about the atom and its constituent components, and again in fact it does.

For the Dogon, the po is the name of the “smallest grain” and represents one of the tiniest building blocks of the universe: the nucleus of an atom. Dogon descriptions of the po at the opening of Amma’s egg, forming like a central air bubble and scattering in a luminous motion, correlate well with scientific descriptions of the process of cooling of the quark-gluon plasma. When we suggest possible meanings for the Dogon symbols that are related to atomic structure, the idea is wholly and completely in keeping with how the Dogon understand their own symbols.

According to the Dogon, the po seed--already one of the most basic elements of creation--consists of four even more elemental components, referred to in combination as the sene seed. Marcel Griaule and Germaine Dieterlen say:

In this infinitely small thing [the sene] Amma then placed the four elements . . . The sene represents the first thing created by Amma . . . [Amma’s first act,] called “diagram of the sene seed,” connotes the superposition of the four elements in the formation of the seed . . . In accordance with Amma’s will, each of them extended its “germ” to touch its neighbor, from east to north, from north to west, etc. This “crossing of the germs” is compared to the intertwining of twigs forming a “nest,” senu. These germs then gathered at the center, where they mixed together and were transformed at the very site of the po, which was still invisible. Then, surrounding the seed, they made it visible . . .

This “crossing of the germs” in all directions is a very competent description aimed at a non-technical observer of the electrons in their crossing orbits surrounding an atom. These orbiting electrons, combined with their nucleus--the po--constitute a completed atom.

In The Pale Fox, Griaule and Dieterlen present a Dogon diagram of the sene seed that is a close match for typical scientific diagrams showing normal electron density and electron orbital shapes. Compare the scientific diagram reproduced below with the Dogon drawing beneath it.

“The Dogon creation myth reflects the nuances of cutting-edge scientific cosmology, and finally this is being recognized. A quintessential read for anyone wishing to learn the truth about this fascinating subject.”

– Andrew Collins, author of From the Ashes of Angels

“The Science of the Dogon decodes the opaque symbols of Dogon creation myth with great ingenuity backed by solid scholarship. Highly recommended.”

– Ida P. Moffett, editor and copublisher of The Pale Fox

“The Science of the Dogon takes the study of the ancients to an exciting new level. Laird has cracked the visual code of the Dogon, and his explanations are thoroughly supported.”

". . . anyone who is remotely interested in our ancient past, ancient myths and traditions, and even how religion might enter into all this, will find Scranton's work intriguing."

"The author makes a convincing case for some intervening force in ancient times that left extremely important clues to their existence with the prevailing natives, knowing perhaps that someday someone would be aware of their presence."

"Enjoyable reading and a hands-on educational approach make this book very enjoyable. Readers will find the conclusion about the Dogon way exciting reading."

"The implications that are posited in Scranton's book are nothing short of earthshaking, considering that the Dogon appear to have gained these sophisticated insights through some sort of sixth sense.
" . . . The Science of the Dogon should prove to be a revolutionary force, especially with regard to integrating the Dogon cosmological vision into our own lives."

" . . . superb scholarly book, which gives overwhelming support to the O'Brien thesis of a single benevolent advanced source for civilization."

"Scranton is a lucid writer who articulates both scientific and cosmological concepts exceedingly well, and is transparent in his methodology. He amply demonstrates the skill set to perform such a demanding analysis, and I hope he continues further with his work."

“The whole text reveals striking similarities between Dogon symbols and those used in both the Egyptian and Hebrew religions, with amazing implications for the history of civilization. The material is an advance on the revelations that made Robert Temple’s The Sirius Mystery an international bestseller.”