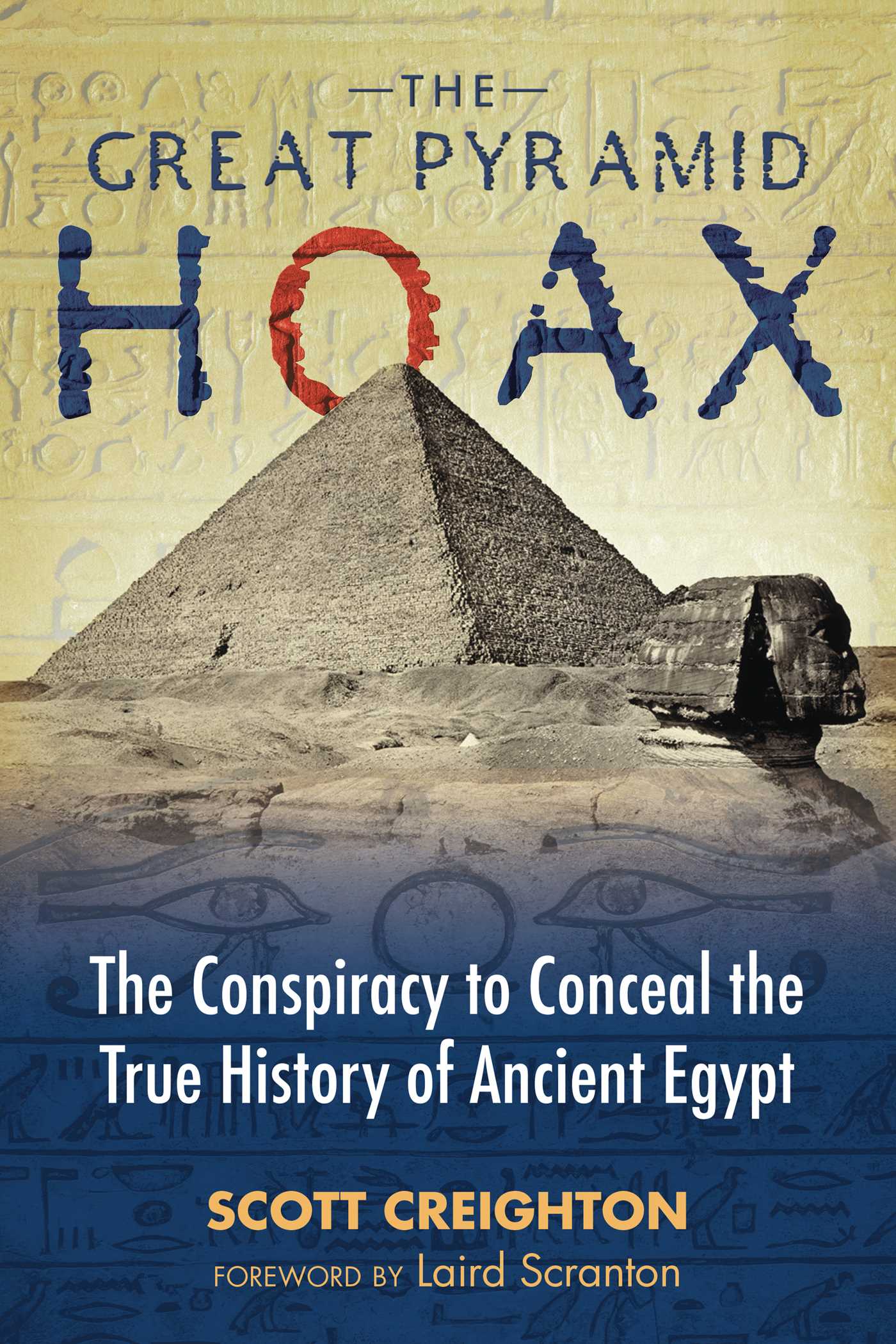 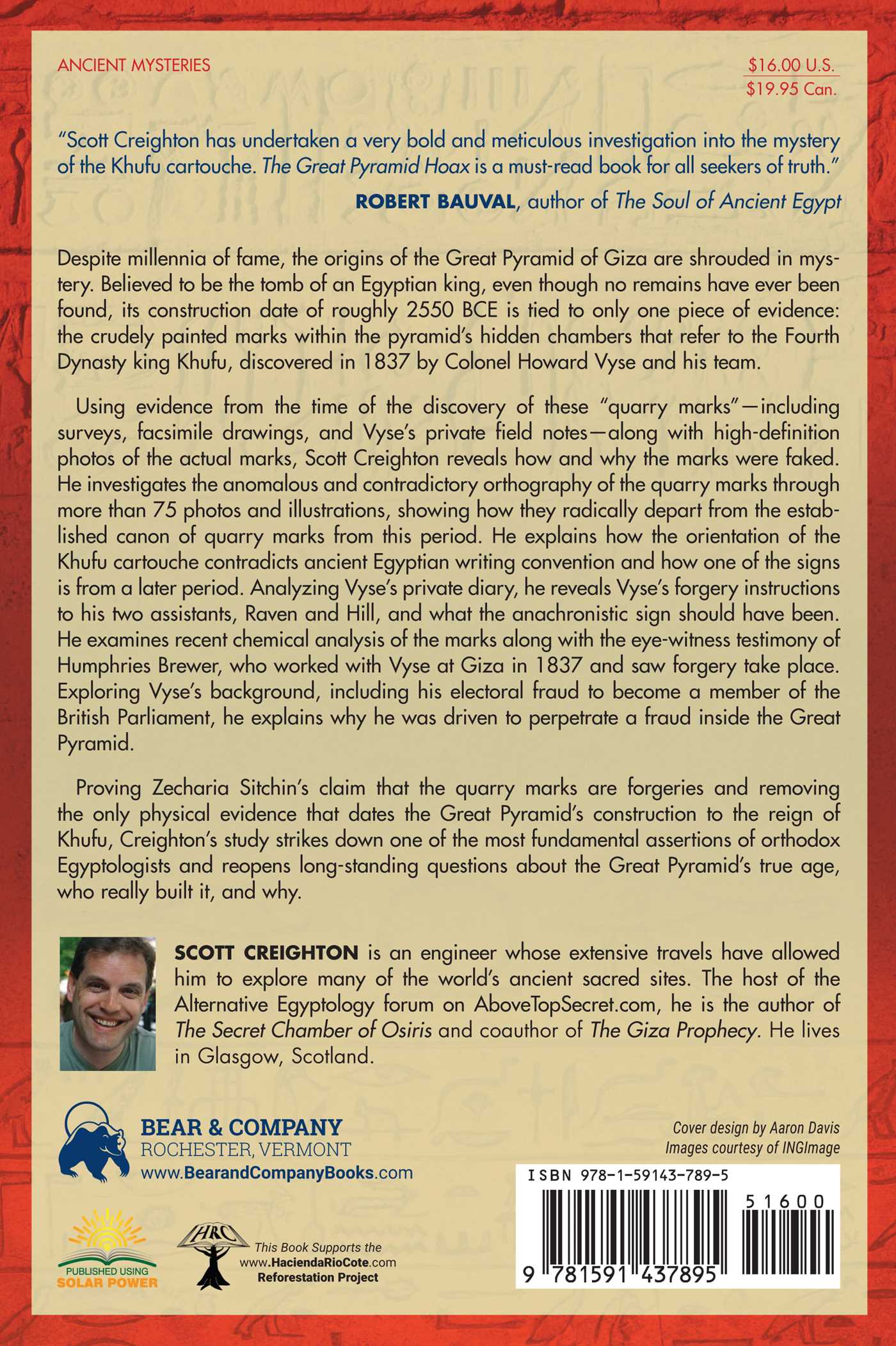 • Includes evidence from the time of the discovery of the marks: Vyse’s private field notes, surveys, facsimile drawings, and eye-witness testimony

Despite millennia of fame, the origins of the Great Pyramid of Giza are shrouded in mystery. Believed to be the tomb of an Egyptian king, even though no remains have ever been found, its construction date of roughly 2550 BCE is tied to only one piece of evidence: the crudely painted marks within the pyramid’s hidden chambers that refer to the 4th Dynasty king Khufu, discovered in 1837 by Colonel Howard Vyse and his team.

Using evidence from the time of the discovery of these “quarry marks”--including surveys, facsimile drawings and Vyse’s private field notes--along with high definition photos of the actual marks, Scott Creighton reveals how and why the marks were faked. He investigates the anomalous and contradictory orthography of the quarry marks through more than 75 photos and illustrations, showing how they radically depart from the established canon of quarry marks from this period. He explains how the orientation of the Khufu cartouche contradicts ancient Egyptian writing convention and how one of the signs is from a later period. Analyzing Vyse’s private diary, he reveals Vyse’s forgery instructions to his two assistants, Raven and Hill, and what the anachronistic sign should have been. He examines recent chemical analysis of the marks along with the eye-witness testimony of Humphries Brewer, who worked with Vyse at Giza in 1837 and saw forgery take place. Exploring Vyse’s background, including his electoral fraud to become a member of the British Parliament, he explains why he was driven to perpetrate a fraud inside the Great Pyramid.

Proving Zecharia Sitchin’s claim that the quarry marks are forgeries and removing the only physical evidence that dates the Great Pyramid’s construction to the reign of Khufu, Creighton’s study strikes down one of the most fundamental assertions of orthodox Egyptologists and reopens long-standing questions about the Great Pyramid’s true age, who really built it, and why.

As we have learned throughout this book, it is the view of Egyptologists that the painted marks within the hidden chambers of the Great Pyramid were Fourth-Dynasty graffiti; crude hieroglyphics painted onto stone blocks by the work gangs cutting the stone at the quarries. Egyptologists do not believe that the quarry marks on the blocks within these chambers were made in-situ, i.e., once the wall and ceiling blocks had been set in place within the chambers.

However the evidence presented in this book suggests that this is an erroneous view. In this chapter further evidence will be presented that supports the view that these markings were indeed painted in-situ by nineteenth-century hoaxers and that the Suphis/Khufu cartouche on the gabled roof trussing in Campbell’s Chamber is also a nineteenth-century fake.

The conventional opinion of the vertical alignment of the Khufu cartouche on the gabled ceiling block of Campbell’s Chamber is that the cartouche and its associated crew name was painted onto the block while it was lying horizontally at the quarry. When the block eventually arrived at the pyramid it was then rotated and set upright into the ceiling. Thus the horizontally painted cartouche was now effectively rotated 90° and appears vertically aligned on the chamber roof trussing. This seems all very reasonable and perfectly plausible--until we take a much closer look.

In 2005, the French photographer Patrick Chapuis presented one of the most stunning, high-resolution photographs ever taken of the Khufu cartouche in Campbell’s Chamber. This remarkable photograph revealed some astonishing features of the painted cartouche, features that had, hitherto, gone completely unnoticed.

Using the Chapuis photograph along with some others by Colette Dowall, Ph.D., independent researcher and art expert, John Snape showed that the Khufu cartouche was painted by starting at the bottom-right corner of the cartouche oval. Unsurprisingly, it is in this area of the cartouche that we find the red ochre paint is most concentrated. The cartouche, from this bottom-right point, was drawn upward and round counter-clockwise where the paint gradually becomes thinner as the brush moves around the cartouche to its finishing point at the bottom-left.

A close examination of the Khufu cartouche on the roof block reveals something quite peculiar. At the bottom-right section where the paint is at its thickest, traces of at least two runs of paint can be observed running vertically down the vertical block.

Furthermore, where the cartouche roof block meets the low support wall, traces of red paint can be observed spreading out horizontally along the joint. Also, just to the bottom-left of the cartouche, as pointed out by independent researcher Philip Femano, Ph.D., the roof block appears to have been scraped in a long horizontal line as though to remove something from the surface. Could this be evidence of a botched paint job where unwanted paint has trickled down from the bottom-right section of the cartouche, where the paint was at its thickest, and spread out along the joint of the low support wall?

In short, whoever painted the Khufu cartouche in Campbell’s Chamber painted it onto the ceiling block in such a way as to give the impression that it had not been painted in-situ, but the tell-tale runs of paint contradict this notion. And if it was painted in-situ (as the paint evidence suggests) then it has clearly been faked, since an ancient Egyptian scribe would never have painted an in-situ cartouche oriented in this manner.
Scott Creighton

“Egyptologists consider the ochre-painted Khufu cartouche in the Great Pyramid as the ultimate proof that this pyramid belongs to the Fourth Dynasty pharaoh Khufu. But much controversy surrounds its authenticity. If the Khufu cartouche is indeed a hoax, then the implications are tremendous. Scott Creighton has undertaken a very bold and meticulous investigation into this mystery. The Great Pyramid Hoax is a must-read book for all seekers of truth.” Robert Bauval, author of The Soul of Ancient Egypt

– Robert Bauval, author of The Soul of Ancient Egypt

“An intriguing narrative, The Great Pyramid Hoax expertly weaves its way through the sands of time, as it revisits one of Egyptology’s most contentious issues--the dating of the Great Pyramid. In the best traditions of alternative research Creighton takes the reader on a personal journey of exploration, skillfully weaving powerful themes upon clear emotional expression, as he attempts to uncover the veracity behind one of Egypt’s most endearing mysteries. A must-read for those searching for the truth.”

– Lorraine Evans, Egyptologist, death historian, and author of Kingdom of the Ark

"A powerfully-argued demolition of the 'facts' on which Egyptologists base their claim that the Great Pyramid was built by the Fourth Dynasty pharaoh Khufu. Scott Creighton's excellent new book The Great Pyramid Hoax is a first-class forensic investigation that Egyptologists should really be paying a great deal of attention to, because it pulls the rug of their chronology right out from under their feet."