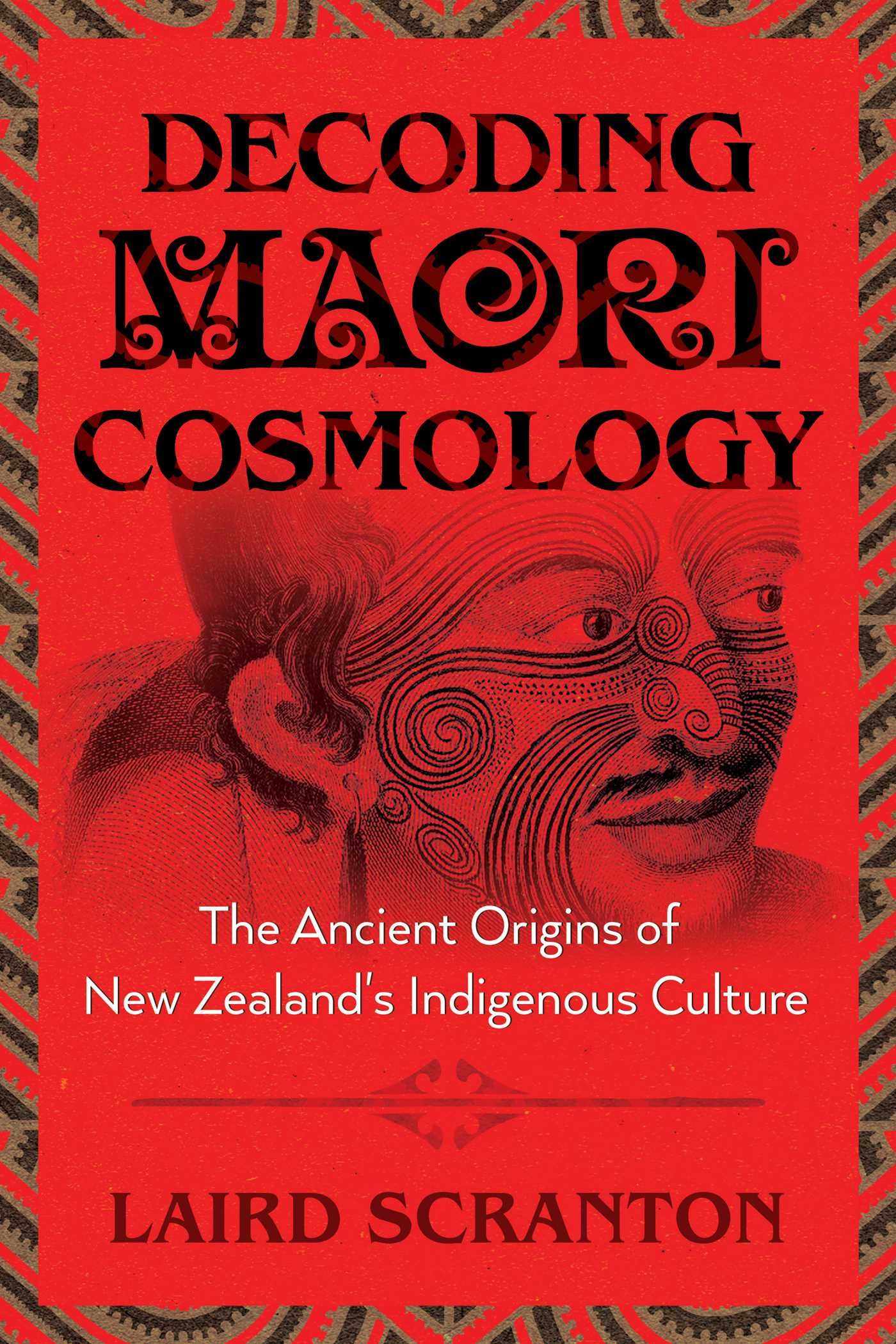 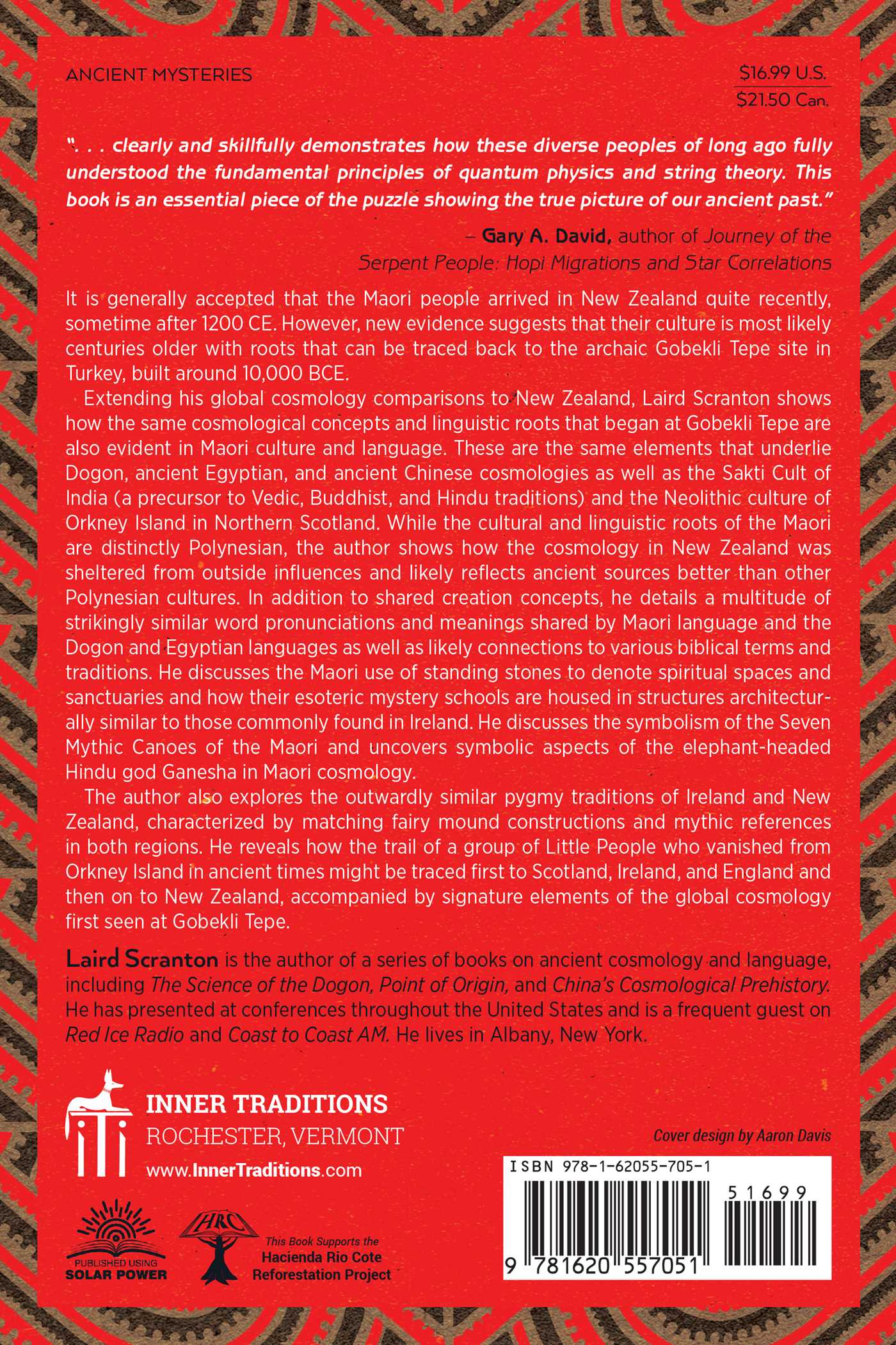 • Demonstrates parallels between the Maori cosmological tradition and those of ancient Egypt, China, India, Scotland, and the Dogon of Mali in Africa

• Explores the pygmy tradition associated with Maori cosmology, which shares elements of the Little People mythology of Ireland, including matching mound structures and common folk traditions

It is generally accepted that the Maori people arrived in New Zealand quite recently, sometime after 1200 AD. However, new evidence suggests that their culture is most likely centuries older with roots that can be traced back to the archaic Göbekli Tepe site in Turkey, built around 10,000 BC.
Extending his global cosmology comparisons to New Zealand, Laird Scranton shows how the same cosmological concepts and linguistic roots that began at Göbekli Tepe are also evident in Maori culture and language. These are the same elements that underlie Dogon, ancient Egyptian, and ancient Chinese cosmologies as well as the Sakti Cult of India (a precursor to Vedic, Buddhist, and Hindu traditions) and the Neolithic culture of Orkney Island in northern Scotland. While the cultural and linguistic roots of the Maori are distinctly Polynesian, the author shows how the cosmology in New Zealand was sheltered from outside influences and likely reflects ancient sources better than other Polynesian cultures. In addition to shared creation concepts, he details a multitude of strikingly similar word pronunciations and meanings, shared by Maori language and the Dogon and Egyptian languages, as well as likely connections to various Biblical terms and traditions. He discusses the Maori use of standing stones to denote spiritual spaces and sanctuaries and how their esoteric mystery schools are housed in structures architecturally similar to those commonly found in Ireland. He discusses the symbolism of the Seven Mythic Canoes of the Maori and uncovers symbolic aspects of the elephant-headed Hindu god Ganesha in Maori cosmology.

The author also explores the outwardly similar pygmy traditions of Ireland and New Zealand, characterized by matching fairy mound constructions and mythic references in both regions. He reveals how the trail of a group of Little People who vanished from Orkney Island in ancient times might be traced first to Scotland, Ireland, and England and then on to New Zealand, accompanied by signature elements of the global cosmology first seen at Gobekli Tepe.

Symbolism of the Seven Mythic Canoes of the Maori

One defining theme of Maori mythology centers on the memory of their first arrival in New Zealand by canoe in ancient times. Based on our experience interpreting myths of other ancient cultures it seems appropriate to characterize these myths as quasi-historic, meaning that that the myths might possibly reflect actual historical events, might serve as a symbolic mask for references of cosmology, or, like the Dogon concept of the Field of the Arou Priest, might possibly be interpreted both historically and cosmologically.

According to surviving myths, the Maori people arrived in New Zealand in seven mythic canoes. To any researcher who is conversant with the numerology of ancient cosmology, the numbers seven or eight, when encountered in a mythic context, should strongly suggest meanings that relates to the processes of creation, which according to the Dogon tradition occurs in seven physical stages, followed by an eighth conceptual stage. One way of distinguishing symbolism that is cosmological from statements that are possibly historical is by comparing any special terms emphasized within the myth to words or phonetic values that have obvious cosmological meaning.

Our source for information about the mythic arrival of the Maori by canoe comes from Sir George Grey, an accomplished nineteenth-century soldier, explorer and governor of both Australia and New Zealand who carefully sought an understanding of Maori culture, language, and mythic lore. Our reference is to his 1885 book Polynesian Mythology and Ancient Traditional History of the New Zealand Race as Furnished by Their Priests and Chiefs, in which he includes a list of the Maori names of the seven mythical canoes.(1) A close examination of these names, in the context of other creational references we have explored in this series of volumes, strongly suggests that they represent seven sequential stages of the creation of matter.

Grey gives the name of what he describes as “the first canoe completed” as Arawa. From a phonetic perspective, this term combines the Maori word Ara, meaning “to arise,” “to awaken,” or “to arouse,”(2) with the word wa, meaning “an interval of space.”(3) A related term wai, from the same phonetic root, implies the concept of water or liquid.(4) The term calls to mind symbolism from the Hindu Fable of the Seven Houses that defines the first stage of the creation of matter as an awakening. Both reflect the notion of an act of perception of matter in its conceptually dormant, wavelike state, that initiates the formation of matter.

The name of Grey’s second mythical canoe is given as Tainui. This name combines the Maori root Ta, meaning “to strike”(5) and the word nui, meaning “great” or “large.”(6) The combined term implies the Polynesian sense of the word tanui, meaning “to increase,” and upholds Dogon assertions that the perceived wave grows as it is next drawn upward.

The third mythical Maori canoe was called Matatua. The Maori word mata means “the face,”(7) and Tregear cites as a specific example “the face of the ocean,” and so calls to mind the creational phrase from Genesis, “the face of the waters.” In the Hindu myth of the Seven Houses, it is a sleeping housewife (by some interpretations, a sleeping goddess) who is awakened during the initial stages of creation. Appropriate to those meanings, the Maori word tua is a term for “deity” or “infinity.”(8)

The fourth canoe of the Maori myth is referred to as Takitumu. The Maori word taki means “to begin to speak,”(9) while the word tumu can refer to “a low sound.”(10) In keeping with a Dogon metaphor that compares the stages of the creation of matter to the speaking of a Word, this term refers to the initial vibrations that are prerequisite both to the formation of particles of matter, and to the vocalization of a word.

The fifth Maori canoe is assigned the three-part name Kura-hau-po. The Maori word kura means “to redden,”(11) and in the parlance of the ancient cosmology implies the notion of reeds, which are symbolic of the concept of existence. From our perspective, a single reed defines the concept of “that which is,” and two reeds in combination represent the concept of “existence.” The Maori word hau means “wind,”(12) which is a cosmological term that is symbolic of vibration. The Maori and Dogon word po, along with the Egyptian word pau, represent the concept of matter, or more specifically in the Dogon sense, the atom. Based on these definitions, the combined term Kura-hau-po would refer to the “vibrating reeds (or perhaps threads) of matter.”

The sixth of the mythical Maori canoes was called Toko-maru. The Maori word toko means “to stretch out,”(13) and the word maru refers to a sheltered space.(14) The cosmological implication of the term is that of the formation and expansion of space.

The last of the seven canoes was given the name Matawhaorua. According to Edward Tregear, the Maori term Mata, cited above as meaning “face” in the sense of “the face of the ocean,” can also refer to “the surface of the earth.” Within the context of the ancient cosmology, the term “earth” is symbolic of mass. On one level, the Maori word wha means “four,” which is number assigned to our material universe in the numerology of the Dogon tradition, perhaps reflective of three dimensions and time. However, the word also means “revealed,” “disclosed,” or “known.”(15) The word whao means “to grasp” or “to lay hold of,” or “to put into a receptacle.” Rua is a familiar cosmological term that refers again to vibration or sound. For the Maori, the root ru means “earthquake.”(16) Based on these definitions, the combined name Matawhaorua implies the concept of the emergences of mass as a kind of receptacle that encloses vibration. From a cosmological perspective, this is a description of the Dogon egg-of-the-world, or of a Calabi-Yau space in string theory.

“Decoding Maori Cosmology is sure to be controversial. Its major premise claims that an archaic, matriarchal tradition, or great Mother Goddess culture, gave birth to parallel mythological systems all across the globe after 10,000 BCE. Continuing his series that researches the evidence for cultural diffusion, Laird Scranton uses comparative linguistics as well as corresponding cosmologies, concepts, architectures, and artifacts in order to link the Maori of New Zealand with Gobekli Tepe in Turkey, the Sakti Cult of Tamil India, dynastic and predynastic Egypt, Skara Brae in Northern Scotland, the Dogon tribe of Mali, and the Buddhism of Tibet and elsewhere. In addition, he clearly and skillfully demonstrates how these diverse peoples of long ago fully understood the fundamental principles of quantum physics and string theory. This book is an essential piece of the puzzle showing the true picture of our ancient past.”

– Gary A. David, author of Journey of the Serpent People

“With every book Laird Scranton writes, he take us deeper into understanding our origin and ourselves. Using his solid foundation of Dogon, Egyptian, Chinese, and Scottish cultures he again displays to the reader the complexities inherent in ancient civilizations and provides additional insights into our obscured past. Laird continues to broaden our understanding of the advanced technical concepts that are fundamental to world myths, concepts so advanced that we are only rediscovering many of them today. He suggests that there is an archaic connection between these diverse cultures, with the ancient cosmology of the Maori of New Zealand further validating this interconnected web of language, culture, science, and tradition. Decoding Maori Cosmology presents intriguing correlations and compelling arguments that cause you to stop and think.”