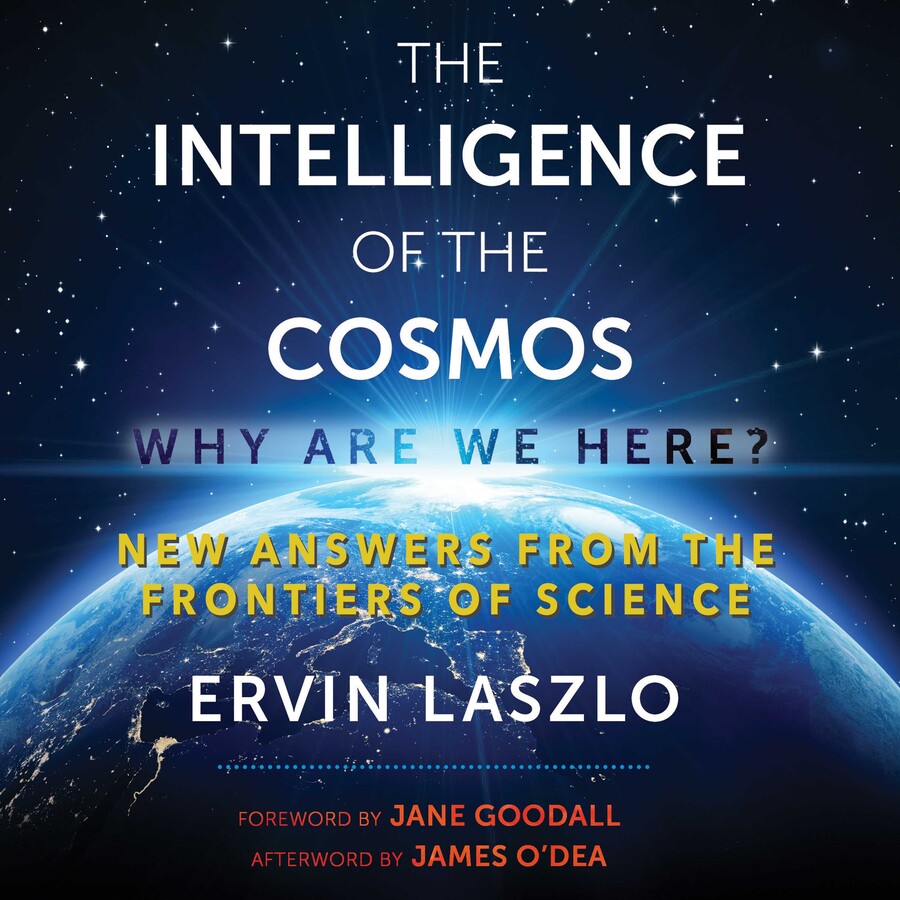 From the cutting edge of science and living spirituality: a guide to understanding our identity and purpose in the world

• Explains how we can evolve consciously, become connected with each other, and flourish on this planet

For the outdated mainstream paradigm the world is a giant mechanism functioning in accordance with known and knowable laws and regularities. The new paradigm emerging in science offers a different concept: The world is an interconnected, coherent whole, and it is informed by a cosmic intelligence. This is not a finite, mechanistic-material world. It is a consciousness-infused whole-system world. We are conscious beings who emerge and co-evolve as complex, cosmic-intelligence in-formed vibrations in the Akashic Field of the universe.

Ervin Laszlo and his collaborators from the forefront of science, cosmology, and spirituality show how the re-discovery of who we are and why we are here integrates seamlessly with the wisdom traditions as well as with the new emerging worldview in the sciences, revealing a way forward for humanity on this planet. They explain how we have reached a point of critical incoherence and tell us that to save ourselves, our environment, and society, we need a critical mass of people to consciously evolve a new thinking. Offering a guidepost to orient this evolution, Laszlo examines the nature of consciousness in the universe, showing how our bodies and minds act as transmitters of consciousness from the intelligence of the cosmos and how understanding science’s new concept of the world enables us to re-discover our identity and our purpose in our world.

With bold vision and forward thinking, Laszlo and his contributors Maria Sagi, Kingsley L. Dennis, Emanuel Kuntzelman, Dawna Jones, Shamik Desai, Garry Jacobs, and John R. Audette outline the new idea of the world and of ourselves in the world. They help us discover how we can overcome these divisive times and blossom into a new era of peace, coherence, connection, and global wellbeing.

Einstein remarked that there are two ways to live one’s life: as if everything is a miracle, or as if nothing is. For the outdated and yet in many quarters still upheld materialist paradigm, the world is a giant mechanism functioning in accordance with in part already known and in part not yet known but in principle knowable laws. When we discover these laws the world is no longer a miracle, and nothing is a miracle in the world.

The new concept emerging at the frontiers of science offers a different view. The world is interconnected and whole, and it is in-formed by a cosmic intelligence. This is not a finite, mechanistic-material world; it is a consciousness-infused whole-system world. And this world is evolving in a discernable direction, both in regard to the systems it calls forth, and in regard to the consciousness that appears in association with the systems--and also beyond them.

Who are we, then, denizens of this consciousness-infused quasi-miraculous world, and why are we here?

Why We Are Here

Let us turn now to the paramount question: the purpose of our existence. The answer that emerges, although on first sight speculative, has an empirical foundation: it is grounded on the observed direction of evolution in the universe. Let us summarize the key findings.

These are simultaneously unfolding processes, and they are not separate: they occur in the same space-time domain of the cosmos: our universe. The purpose of evolution in this domain, it appears, is to achieve coherence in natural systems, and, embracing empathy, oneness and love in consciousness.

We are here to transmit the intelligence of the cosmos into space and time.

But what is the purpose of this purpose--why are we here to transmit the intelligence of the cosmos into the universe? This is a seemingly esoteric, metaphysical question, but it has a seasoned, empirically-based answer. We can discover it by this train of thought.

However, these goal-states do not have equal status in the deeper reality of the cosmos. The evolution of coherence in natural systems is not and cannot be an ultimate goal-state for the simple reason that natural systems cannot exist infinitely in the cosmos. Such systems arise and evolve in the universe, but the universe is a temporary presence in the cosmos. It arose in the cosmic singularity we call Big Bang as particulate entities were created, with specific spatial and temporal relations. They introduced space and time in the seamless wholeness of the field that is the primordial reality and basic ground-state of the cosmos. The particles--and the atoms, molecules, and multi-molecular systems formed by the particles--are as many ripples produced by the excitation of the ground-state, which then becomes the Akashic sub-quantum field in the universe. The ripples evolve, take on structure and complexity, and create the world we inhabit. But they are not permanent--physical cosmology tells us that sooner or later they fall back into the cosmic ground-state.

The universe is known to be finite in time, but just how it comes to an end is not definitively known. The possibilities are described in various cosmological scenarios. The end may be the “Big Crunch” Stephen Hawking described as the final evaporation of galactic-size black holes, constituting the vanishing of stripped hydrogen nuclei, the super-compacted remnants of matter in the universe. The end could also the Big Freeze, an infinite expansion of space, creating infinite distances and temperatures below the threshold of irreversible processes. And even if the universe remains balanced at the razor’s edge between expansion and contraction, the systems that arose in it will still break down and vanish, since the hydrogen nuclei required for the formation of stars is in finite supply, and when that supply is exhausted, no further stars can form.
Ervin Laszlo

“From the time when the conscious universe was a preposterous notion to today, when it’s a cutting-edge idea full of promise for your future, Ervin Laszlo has been its staunch champion. Now he and his colleagues press the argument with even more urgency and depth. I concur that consciousness must be regarded as the ground state of existence. Only when we begin to see ourselves embedded in a reality where mind, body, ecology, planet Earth, and the cosmos are all expressions of the same consciousness will we truly know who we are.”

– Deepak Chopra, coauthor of You Are the Universe

“Ervin Laszlo is without any doubt one of the greatest scientists and philosophers of our time. His seminal concepts of the Akashic holofield and the connectivity hypothesis represent an extraordinary intellectual achievement that will be seen in the future as a critical landmark in the history of science. Laszlo succeeded in something previously deemed impossible--creating a ‘map of everything’ that dissolves the boundaries between natural sciences, psychology, philosophy, and spirituality. In his latest book, The Intelligence of the Cosmos, Laszlo summarizes in a clear and captivating style his profound understanding of the nature of reality and human nature that has emerged from six decades of his unrelenting search for truth. His work might become the cornerstone of the new comprehensive scientific worldview of the twenty-first century.”

– Stanislav Grof, M.D., author of Beyond the Brain and Psychology of the Future

“Professor Ervin Laszlo, author of the 1987 world-changing classic Evolution: The Grand Synthesis, again gives us a great work for the future, The Intelligence of the Cosmos: Why Are We Here? New Answers from the Frontiers of Science. For the entire past century science has inched steadily toward a synthesis of physics, cosmology, and biology. Increasingly cosmology looks more and more like evolutionary biology, and intelligence is discovered in the tiniest nooks and crannies of the universe. Now comes the bold step in which Laszlo points out the obvious, showing us that the universe is a living intelligent being. This book is science at its most engaging and absolute best!”

– Allan Combs, Ph.D., professor at the California Institute for Integral Studies and author

“In 1897 the French painter Paul Gauguin titled one of his masterpieces Where Do We Come From? What Are We? Where Are We Going? The painting ended up in the Museum of Fine Arts in Boston. But those questions, and many others brilliantly embraced in this remarkable work, The Intelligence of the Cosmos, continue to haunt every aspect of our lives. Ervin Laszlo and colleagues have gently and demonstrably entered a domain of that luminous haunting, that “supercoherence” which they reveal to be rooted to the quintessential mysteries of all life forms: life’s origins, destiny, and seemingly incomprehensible, flickering instant of Being. It is a book like no other and offers a remarkable and hopeful context for better navigating these colossally challenging times—for biodiversity, for humanity, and for something indescribable shaping our entire universe and ourselves. Indeed, this may be the most important book ever written on the subject of consciousness, against the backdrop of a starry night and the alluring earth beneath our feet.”

“I highly recommend this timely cutting-edge material from Ervin Laszlo, as it brings together science-based evidence in a way to understand the transformational revolution and new insights into consciousness and the evolution of humankind taking place now!”