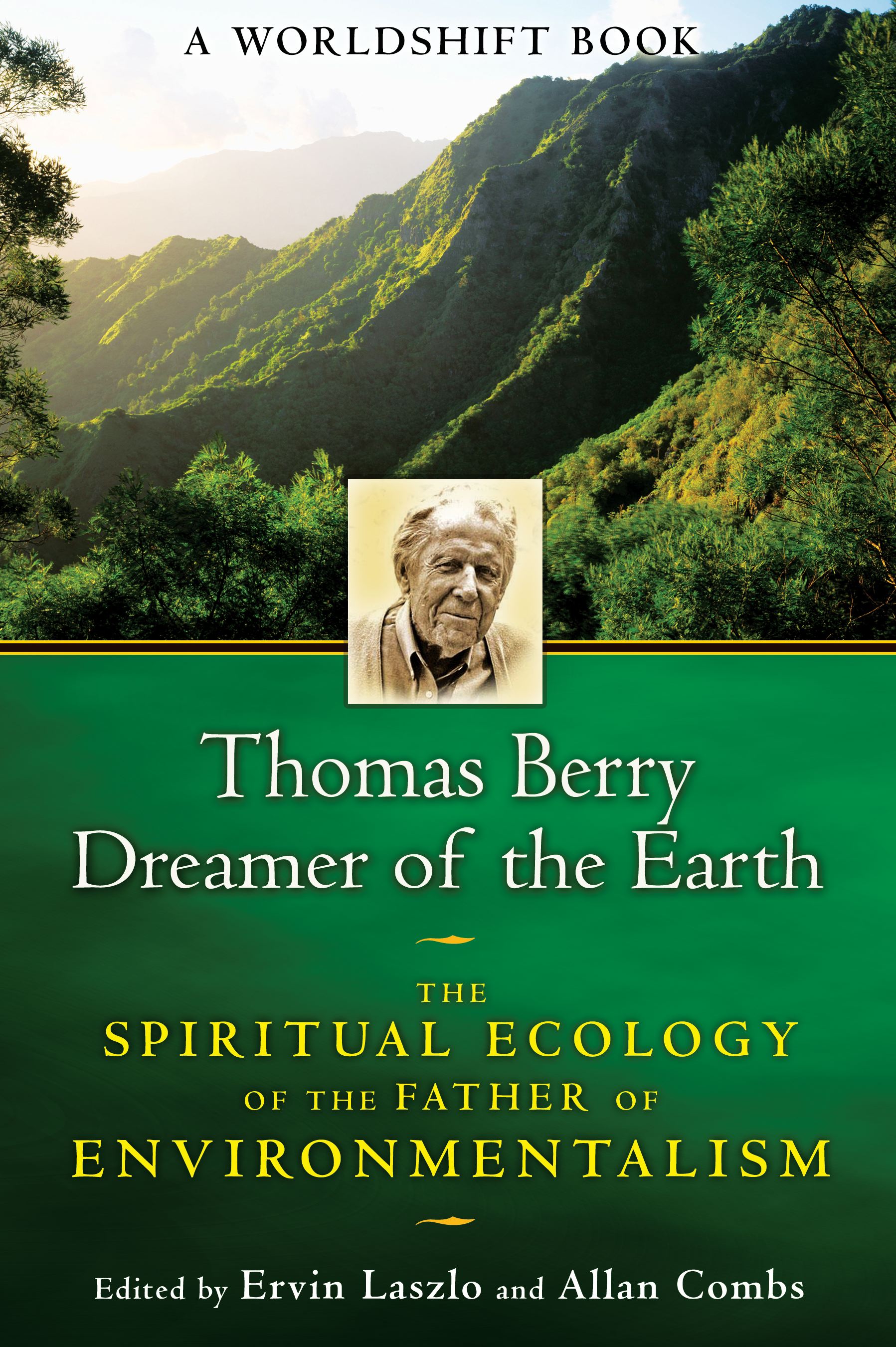 A tribute to the visionary contributions and prophetic writings of Thomas Berry, spiritual ecologist and father of environmentalism

• Includes a little-known but essential essay by Thomas Berry

When cultural historian and spiritual ecologist Thomas Berry, described by Newsweek magazine as “the most provocative figure among the new breed of eco-theologians,” passed away in 2009 at age 94, he left behind a dream of healing the “Earth community.” In his numerous lectures, books, and essays, Berry proclaimed himself a scholar of the earth, a “geologian,” and diligently advocated for a return to Earth-based spirituality.

This anthology presents 10 essays from leading philosophers, scientists, and spiritual visionaries--including Matthew Fox, Joanna Macy, Duane Elgin, Sean Esbjörn-Hargens, Ervin Laszlo, and Allan Combs--on the genius of Berry’s work and his quest to resolve our global ecological and spiritual challenges, as well as a little-known but essential essay by Berry himself. Revealing Berry’s insights as far ahead of their time, these essays reiterate the radical nature of his ideas and the urgency of his most important conclusion: that money and technology cannot solve our problems, rather, we must reestablish the indigenous connection with universal consciousness and return to our fundamental spontaneous nature--still evident in our dreams--in order to navigate our ecological challenges successfully.

The Dreamer of the Earth
Ervin Laszlo

Few thinkers have been as far ahead of their time as Thomas Berry. Truly, he was a man of not just the twentieth century, but also the twenty-first. His thought exceeded his own estimation of himself and the relevance and meaning of his ideas, his warnings, and his vision became more manifest in the new century than they had been in the old.

Many of Berry’s writings seem as if they were committed to paper today, by a prophetic mind of the twenty-first century; he diagnosed problems that are only now emerging into public awareness. He had amazing foresight.

Through human presence the forests of the earth are destroyed. Fertile soils become toxic and then wash away in the rain or blow away in the wind. Mountains of human-derived waste grow ever higher. Wetlands are filled in. Each year approximately ten thousand species disappear forever. Even the ozone layer above the earth is depleted.

Such disturbances in the natural world coexist with all those ethnic, political, and religious tensions that pervade the human realm. Endemic poverty is pervasive in the Third World, while in the industrial world people drown in their own consumption patterns. Population increase threatens all efforts at improvement.

To cope with these problems what is needed is not simply a reduced supply of fuels or some modification in our system of social or economic controls. “Our challenge is to create a new language, even a new sense of what it is to be human.”

Contrary to the widespread belief that the modern world is immeasurably superior to the world of bygone ages, Berry noted,

Even the most primitive tribes have a larger vision of the universe, of our place and functioning within it, a vision that extends to celestial regions of space and to interior depths of the human in a manner far exceeding the parameters of our own world of technological confinement.

While former civilizations established our exalted place within the seasonal sequence of the earth’s natural rhythms and established those spiritual centers where the meeting of the divine, the natural, and the human could take place, the new effort, beginning in the sixteenth and seventeenth century work of Francis Bacon, Galileo Galilei, and Isaac Newton, was less concerned with such psychic energies than with physical forces at work in the universe and the manner in which we could avail ourselves of these energies to serve our own well-being.

The responsibility for this “new effort,” to be sure, we should not ascribe to the great pioneers of modern science--for they were themselves deeply spiritual people with vast horizons--but to their followers: the Galileans and the Newtonians who had mistaken a frame of explanation for the mechanistic regularities observed in the natural world for the fundamental nature of that world. It was they who had given birth to what Berry called the “objective world”: “a world clearly distinct from ourselves and available not as a means of divine communion, but as a vast realm of natural resources for exploitation and consumption.”

Clearly, today, we are facing critical problems, but what is it that needs to be done? Berry’s advice remains clear and timely. Basically, he told us, “what we need, what we are ultimately groping toward, is the sensitivity required to understand and respond to the psychic energies deep in the very structure of reality itself.” He added, “I suggest that this is the ultimate lesson in physics, biology, and all the sciences, as it is the ultimate wisdom of tribal peoples and the fundamental teaching of the great civilizations.”

But how are we to evolve this “sensitivity”? Here we should heed Berry again: “We need only to listen to what we are being told through the very structure and functioning of our being.” Because, he told us

the universe is so immediate to us, is such an intimate presence, that it escapes our notice, yet whatever authenticity exists in our cultural creations is derived from these spontaneities within us, spontaneities that come from an abyss of energy and a capacity for intelligible order of which we have only the faintest glimmer in our conscious awareness.

Accessing the spontaneities of the universe calls for a vision that is dreamlike. Imagination functions most freely in dream vision; thus, we tend to associate creativity with dream experience. “The dream comes about precisely through the uninhibited spontaneities of which we are speaking,” said Berry. “In the beginning was the dream. Through the dream all things were made, and without the dream nothing was made that has been made.” He went on to say, “We are immersed in the depths of our own being and of the cosmic order itself in the dream-world that unfolds within us in sleep, or in the visionary moments that seize upon us in our waking hours.”

Berry’s basic insight remains entirely valid. “[T]he present situation is so extreme that we need to get beyond our existing cultural formation, back to the primary tendencies of our nature itself, expressed in the spontaneities of our being.”

We can derive solace and draw courage from Berry’s assurances. “[W]e are not left simply to our own rational contrivances. We are supported by the ultimate powers of the universe as they make themselves present to us through the spontaneities within our own beings.”

The brightest glimmer of hope shimmering at the darkening horizons of the current global crisis is, in Berry’s words, that “the universe is revealing itself to us in a special manner just now. Also the planet Earth and the life communities of the earth are speaking to us through the deepest elements of our nature.”

“Thomas Berry, Dreamer of the Earth offers an introduction to one of the most extraordinary thinkers of the twentieth century. His stature cannot be fully appreciated unless one brings to mind such axial personalities as Pythagoras or Confucius, thinkers who gave rise to civilizations. The deep structure of human beings is undergoing a seismic shift, which Thomas foresaw and in part evoked. To understand this new planetary mode of consciousness, there is no substitute for a close study of his ideas.”

“While the religious community is starkly divided on the issue of environmentalism. Thomas Berry was not. A Passionist priest and self-described cosmologist and “geologian” he came down firmly on the side of environmentalism and was a pioneer in the field. . . This book is an admirable introduction to that quest.”

“. . . an impressive job of conveying the sometimes complex spiritual perspectives of a contemporary visionary.”

“Here is another book calling us to reconnect with the natural world and to find all the meaning we need in an Earth-based spirituality.”

“Thomas Berry was one of the “Greats”, and this collection by Laszlo and Combs is a wonderful tribute.”

“Spontaneously I am inclined to shouting out an energetic, resounding (green) hallelujah of affirmation to the foregoing expression. Indeed, Bill Plotkin’s essay is superlative in a volume that is reader worthy and excellent from start to finish. Space does not allow me to do equal justice to the contributions from Joanna Macy, Duane Elgin, Stanley Krippner, Geneen Marie Haugen, Matthew Fox and the others.”

“The ten authors of this book review and extract the essence of Thomas Berry’s thinking regarding our society’s movement towards a sustainable environment and for saving our earth from destruction, destruction imposed upon it by the profit seeking industrial-business segment of our society. Thomas Berry goes beyond what many millions of us are ‘doing’ to save the earth by pointing out that it is the nature of our consciousness with regard to how we see life and our role as part of the universe and the earth’s environment that needs to change and evolve...I found this reading especially exciting and most important for our survival.”