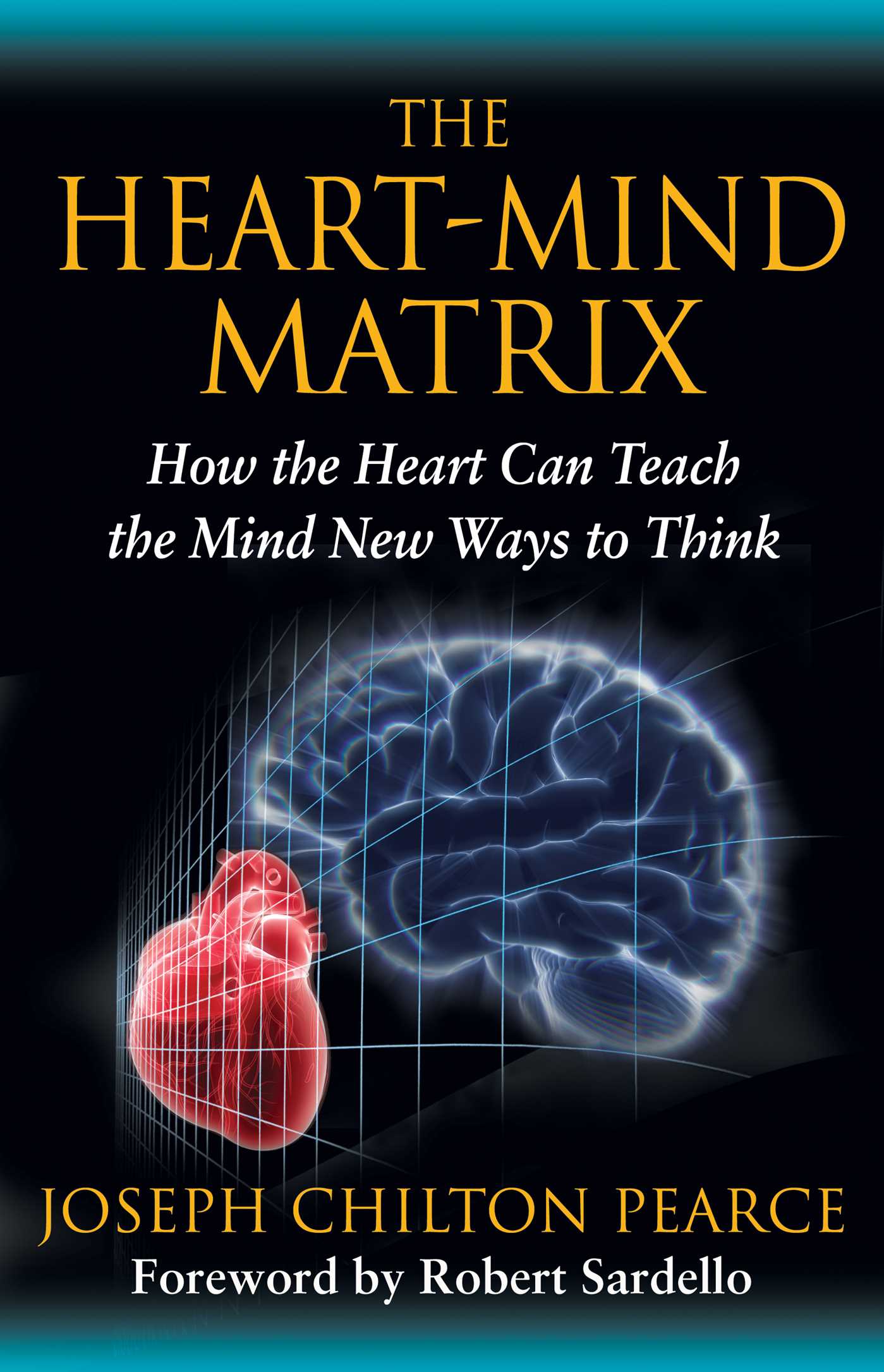 How the Heart Can Teach the Mind New Ways to Think

Expanding the revolutionary theories of mind explored in the bestselling The Crack in the Cosmic Egg and The Biology of Transcendence, Joseph Chilton Pearce explains how the heart provides the balancing intelligence to the brain’s calculating intellect, an innate system of emotional-mental coherence lost generations ago through a breakdown of the nurturing culture of our ancestors. By severing ourselves from our heart intelligence, we are left with our selfish, survival-oriented reptilian brains, which create and reinforce “strange loops” between potential and actual reality, leading to our modern world’s endless cycle of self-inflicted disasters and societal crises. Pearce explains that in order to break these cycles and transcend a life focused solely on surviving the results of our own reactive patterns, we must reconnect with the compassionate intelligence of the heart.

Offering a rich variety of evidence, Pearce explores neurological research, lost and enduring nurturing cultures, personal experiences, and accounts from the lives and writings of modern sages such as Jane Goodall, Maria Montessori, and Rudolf Steiner. He shows that by activating the original matrix of the Heart-Mind--the engine of our spiritual evolution and our innate connection to the universe--we can teach our brains new ways to think, amend our destructive behavior loops, and enter into a future of peace, spiritual connection, and conscious evolution.

INTRODUCTION
A MIRROR OF THE UNIVERSE

In the early half of the twentieth century, scientist Arthur Eddington pondered how it was that this three- or four-pound clump of jelly in our skull could have discovered, come to understand, manipulate, and even control so many secrets of the universe in so short a time as we have.

Eddington mused that “Man’s mind must be a mirror of the universe.” Engrossed in writing my first book, The Crack in the Cosmic Egg, I was delighted with Eddington’s imagery, which verified a principal pillar of Crack (begun in the late 1950s). “Why of course!” I mused in turn, as I worked out Eddington’s issue. “Man’s mind is a mirror of a universe that mirrors Man’s mind.” Each, I claimed, brings about and sustains the other.

Place two mirrors opposite each other, I suggested, and observe the “infinite regress” resulting, as the endless series of reflections unfolds, stretching toward an infinite nowhere point. To ask which mirror reflects first, giving rise to such replication regress is as fruitless as the issue of mind and its reality. For there is no beginning or ending of such processes or the minds musing on them. Their reflecting beginning is in their reflecting ending and vice versa.

In spelling this out, I claimed that a scientist, in his passionate research leading to a great discovery out there, has, unbeknown to himself or his scientific community, entered into that discovery, as an indeterminable but integral part of the creation itself. While we do not “create” our reality or world, there is likewise no ready-made world-out-there awaiting our discoveries or creations within it. Mind and its world-creation give rise to each other, just as do creator and that-created.

My second argument has been that creation is not just an intelligent process; it is intelligence itself, as is its vital counterpart, evolution. Just as this creative-evolution doesn’t “have” intelligence but is intelligence, whatever is created therein is equally an expression of that intelligence (as will be picked up again in chapter 7).

Creation is an endless process stochastically exploring every possibility of being. Stochasm is from a Greek word meaning “randomness with purpose,” and to deny a random factor in creation-and-that-created is an error, as is denying purposefulness behind that randomness or its creation. Evolution is an ever present pressure or urge within any and all created phenomena or living events to move beyond any limitation or constraint within such event-phenomena.

So evolution is the transcendent aspect of creation, rising to go beyond itself, being the response of life to its own ever unfolding evolution. And every living phenomenon or event reaches, at some point, its eventual limitation and constraint. There could, in fact, be no creation that is final, because even the concept of finality would indicate limitation against which evolution, as is its nature, would, perforce, move to creatively rise and go beyond.

“Where” transcendence might go in “moving beyond” is determined by the going itself, as we will further explore in chapter 11. Our “going” enters into the nature of that which we enter into and brings about by our going--which is the very definition of the strange loops rising within this “mirroring” process. And herein lies the central thesis of this little argument of mine, as it did in my first book, Crack in the Cosmic Egg, well over half a century ago.

By its nature, evolution reveals all “points of constraint-limitation” in creation, and creation takes place stochastically in response. Stochasm’s purposefulness acts to select, out of that profusion, what is needed or what works. Like water, evolution seeks out, through means that come about through this seeking-out, a level that lies beyond its present state. Because evolution’s “present state” is always the moment of its stochastic movement to selectively go beyond itself, that “moment” is ever present and all there is. As Robert Sardello points out, in that Moment, the future will flow into our present, “making all things new,” if allowed.

Enter Death: The Ever Present Third Factor in the Mirroring of Evolution-Creation

Not death itself, but the fear it engenders, is the greatest of constraints. Moving to overcome this limitation is complex, because abolishing death (were such possible) would change the very ontological constructs of reality as it has evolved. So even the notion of abolishing death, as proposed in some Eastern philosophies, is counterproductive and would stop creation in its tracks. Fear involves the complexities of our ever changing emotions. Emotion involves our capacity to relate and interact, which is a cultural issue, not ontological, and tackled later in this book.

In the meantime, consider that cosmos and person (you and me) are of the same order, the same essential creative function, regardless of the size or measurements involved (light-years or micrometers). We were that creative function on its “micrometer scale” until we invented the electron microscope, which calls for even finer gradations, or “scalar measurements,” cumbersome refinements we can do without here.

For clarity at this point, however, a certain “biological” complexity is involved. Remember that bio simply means “life,” while the logical way it works is our knowledge of this life process. And this process has a very logical “way it works,” though not some machinelike or precise way. Wandering or meandering stochastically through its endless branching ways is more true-to-life as it happens.
Joseph Chilton Pearce

“Of the hundreds of books about evolution I have read, some of which I’ve written myself, this book best captures the sense of what evolution is. It takes you into a realm of celestial playfulness to provide a sense of its living presence, of what it feels like. It is like the difference between looking at evolution through a microscope, or laid out in charts on a wall, and feeling yourself within it, part of it--and able to do something about it.”

“Pearce explores neurological research, lost and enduring nurturing cultures, personal experiences, and accounts from the lives and writings of modern sages such as Jane Goodall, Maria Montessori, and Rudolf Steiner. He shows that by activating the original matrix of the Heart-Mind--the engine of our spiritual evolution and our innate connection to the universe--we can teach our brains new ways to think, amend our destructive behavior loops, and enter into a future of peace, spiritual connection, and conscious evolution.”

“This is a spiritual treatise of great insight, which incorporates the world of materialistic science. Pearce speaks with equal authority when he is talking about the teachings of Jesus as when he is describing Roger Sperry’s theory of the mind emerging from its matrix/brain and turning back on itself to change that matrix. Pearce is first and foremost a child advocate. It has led him to a profound understanding of the ways in which nurturing our children is also advancing the human species.”

“We can live by our minds, and our hearts. The Heart-Mind Matrix: How the Heart Can Teach the Mind New Ways to Think is a spirituality guide from Joseph Chilton Pearce as he presents a new age spiritual guide to living our lives and finding greater understanding of ourselves. Key concepts include exploring where we came from, and discerning a better place for ourselves and our descendants in the future. The Heart-Mind Matrix shows plenty to ponder on spiritual evolution, highly recommended.”

“Joseph Chilton Pearce has long been one of my great heroes, and this most recent book, produced in his mid eighties, displays an intelligence at the height of its capacities, with wide-ranging knowledge and depth of wisdom approached by few others. For those who hear the call to greater understanding of self and world, this book can be both an inspiration and a guide.”

“Joseph Chilton Pearce recalls and distills teachings of his many mentors and cohorts over his long career...The resultant synthesis bears the imprint of spirituality, field physics, evolutionism and eureka-genius creativity; as well as nurturant natural sexuality, child bearing and rearing, and more – but stands righteously proud in its own right: the evolutionary blue-print of possibility.”

“In 20 years of personal experience I have found Joe Pearce to be original, provocative, challenging, insightful, courageous, painfully honest, humble, and generous beyond reason--which places him in my book right alongside David Bohm, Ashley Montagu, Krishnamurti, Socrates, and other world teachers.”

“The startling arc of Joe Pearce’s vision has proved true time and again. We ignore him at our own peril.”

How the Heart Can Teach the Mind New Ways to Think