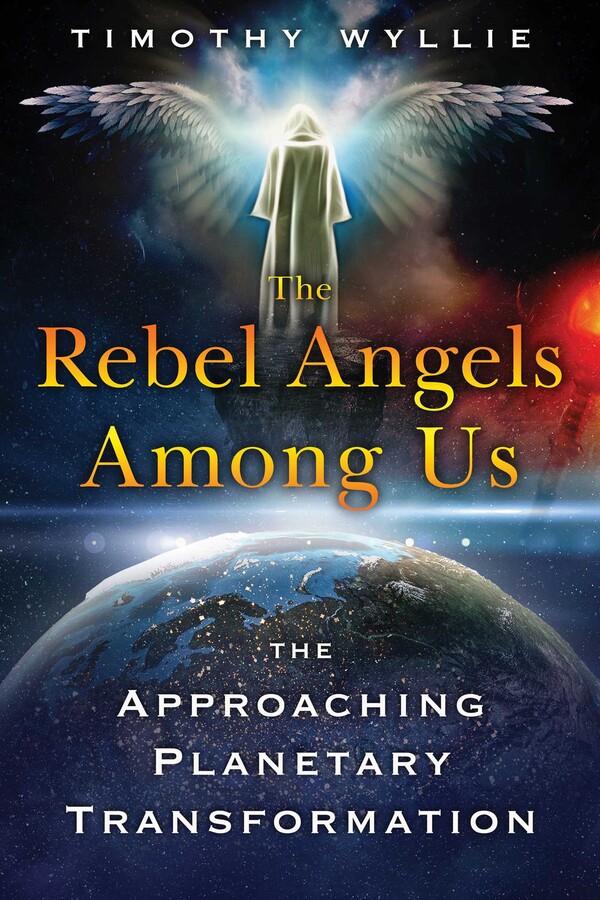 By Timothy Wyllie
LIST PRICE $14.99
PRICE MAY VARY BY RETAILER

Writing together with Timothy Wyllie, the angel Georgia details the events of Earth’s ancient history during the fall of Atlantis

• Reveals, in detail, the devolution of Atlantean life during its society’s decline, the calamities that enveloped the civilization, and the migration of this sophisticated culture to other areas of the planet

• Shares Georgia’s travels to the planet Zandana, a world facing the same problems as Earth yet taking a very different approach to their resolution

An angel of Seraphic status, Georgia arrived on this world with the first of the celestial missions, over half a million years ago. During the angelic rebellion 203,000 years ago, which led to the quarantine of Earth and 36 other planets from the Multiverse, she aligned herself with Lucifer and the rebel angels. After the rebellion, Georgia was permitted to remain on this planet as a Watcher, making occasional side-trips to Zandana, a sister planet also under the thrall of the angelic rebellion. Writing together with Timothy Wyllie, Georgia provides her personal account of Earth during the fall of Atlantis as well as accounts of her trips to Zandana.

Georgia reveals, in detail, the devolution of Atlantean life during its society’s decline, the calamities that enveloped the civilization, and the migration of this sophisticated culture to other areas of the planet. She shows how the fate of Atlantis ties in with the Lucifer Rebellion and also offers us understanding of where human civilization is now in contemporary times. Her travels to the planet Zandana reveal a world at the same stage of development and facing the same problems as Earth, yet taking a very different approach to their resolution. Through her revelations, Georgia exposes the supreme significance of Earth in the larger Multiverse context and also how our planet is one of the worlds on which the rebel angels have been accorded the privilege of a mortal incarnation. She describes how this unprecedented interspecies mutation--rebel angel incarnations--started in Atlantis in the eighth millennium.

Interwoven with Georgia’s narrative are her observations of Timothy Wyllie’s current and previous lives, including his involvement with the Process Church and his struggle to leave it. Georgia shares her words, in part, to awaken the 100 million rebel angels currently living their human lives, most unaware of their angelic heritage. She reveals how a mortal incarnation for a rebel angel is an opportunity to redeem their past and help prepare for the imminent transformation of global consciousness as the rebel-held planets, including Earth, are welcomed back into the Multiverse.

Chapter 1. The Path to Breaking Free

Mein Host Timothy’s second-life began when he returned from the dead that rainy November afternoon in 1973 -- although he wouldn’t really understand this until he was more fully disentangled from the imbroglio which he had created for himself.

His disappointment at hearing nothing back from Mary Ann about his Near-Death Experience had created the first tiny crack in his conviction that she was the incarnate Goddess. But he quickly repressed the thought. He clearly didn’t want to believe she might have been playing him for a fool all along. I could see it in his emotional body how firmly he pushed down his moments of doubt.

Besides, he had his work to distract him.

The New York Chapter of The Process Church on Manhattan’s First Avenue -- now The Foundation Faith of the Millennium -- was becoming progressively busier as public interest in the New Consciousness movement brought in a wider set of people.

It had been under my ward’s leadership that the Chapter had moved toward solvency and I could see my ward thought he needed to play the game out. I don’t believe it ever came to him to leave the community at that point. Whenever I have heard him subsequently speak about it, he has always said that life in the Chapter was “terrifically stimulating and challenging,” and he was “enjoying it far too much to leave.”

I’ve come to think in retrospect that Mein Host was in a position of leadership in which he simply couldn’t live with himself were he to let everyone down. If he gave any thought to the idea of leaving the community -- and escaping the clutches of his dark Goddess -- he must have known that such a situation would have to be very carefully crafted.

Yet I saw no sign this thought had ever crossed his mind as he settled back into his regular everyday life.

Besides, his mind was filled with other matters; Tibetan Buddhism being only one of them.

Mein Host was no expert on Tibetan Buddhism but -- unlike many Westerners -- he had at least read The Tibetan Book of the Dead as a result of his entheogenic explorations in the early 1960s. Having joined the community in 1965 and choosing to set aside entheogens, I doubt if he’d given any further thought to Buddhism until the afternoon two small, elderly Tibetan monks and their translator sat in front of him in his office.

What occurred then has continued to puzzle him, so I hope my view of that encounter will illuminate what has long concerned him.

There had been no warning, no phone call, no appointment; just Sister Marion knocking at his office door and asking him if he had the time to meet with “a couple of very odd-looking little brown men in skirts.”

After being introduced by the translator as monks Nechung Rinpoche and the slightly older Drepung Rinpoche, the pair in their saffron and brown robes sat down, both on the edge of their chairs with their backs rigidly straight, and their nutbrown, oval faces sweetly impassive.

It was Nechung Rinpoche who did the talking. He spoke through their translator, who was standing slightly behind and between them. The Rinpoche explained that he was the senior monk of the Nechung monastery, and among his responsibilities was the care of the Dalai Lama’s State Oracle.

My ward leaned forward with interest when he heard about the State Oracle. I don’t believe he knew about this mediumistic practice descending from the pre-Buddhist Bön shamanism. And he certainly wouldn’t have known -- if indeed the monks even knew -- that Bön shamanism itself was descended from a tradition brought to Tibet in one of the Lemurian diasporas between forty and fifty thousand years ago.

The Nechung Rinpoche went on to explain the State Oracle was always consulted by the Dalai Lama before any important decisions were taken, and it was the result of one of these psychic consultations that had brought them to his office.

I saw a mixture of interest and confusion on my ward’s face. I could feel he liked these men. He was at ease with them and when I looked at his emotional body I could see how it was harmonizing with those of the two monks.

The Rinpoche went on to explain that the Oracular consultation in question had concerned ways of introducing Tibetan Buddhism to the West.

I noticed the Drepung Rinpoche tilt forward slightly at this point, his left hand gripping the edge of the desk, his skin like tanned leather stretched thin over skeletal knuckles. The Nechung Rimpoche had paused and I could feel something unspoken pass between the two monks before he continued.

Here it comes, I thought.

It was in the course of this consultation with the State Oracle, the Rinpoche continued, that Mein Host’s name had been pronounced by the Oracle as a person who would be helpful to their cause. Would he therefore help them?

This wasn’t the kind of request that came in everyday and my ward has since said he would have probably helped them without any prompting from the State Oracle.

Although they didn’t share a common language they seemed to have a natural and unspoken resonance with my ward. More than once I caught the three of them giggling away at some shared unspoken joke. He said afterwards one of the characteristics he loved was the old monks’ humor.

It was a perfect match. The Foundation had the facilities, the Tibetan Buddhists had the message and the intention, and New York was ready for what they had to say. This combination led to two extremely successful conferences -- as well as a series of seminars -- delivered by these two eminent Buddhist monks. My ward wasn’t to discover just how eminent they both were until many years later.
Timothy Wyllie

Timothy Wyllie (1940-2017) was born in Great Britain and raised in London. Having wended his way through an English public school education and then seven years further study at college, he qualified as an architect. In the late 70s, Timothy began a systematic exploration of out-of-body states. This led to experiments in telepathic communication with dolphins and an open invitation to contact with nonphysical beings that continues to this day. During this time, he was also running his own business in New York City, marketing a system he had co-devised for storing and filing color photographs. He retired from the business community in 1981 and turned full time to his creative endeavors. As a musician, Timothy made several tapes of what he called "Bozon Music"--a True Age improvisational jazz, shamanic music of the heart--as well as a series of guided visualization and meditation tapes. Also an artist, he worked on a virtually endless progression of drawings of sacred landscape. It was what brought him most joy. Timothy traveled frequently to give lectures and seminars or to investigate sites and locations for his drawings. He is the author of Ask Your Angels: A Practical Guide to Working with the Messengers of Heaven to Empower and Enrich Your Life, Dolphins, ETs & Angels, the Rebel Angels series of books featured below, and a co-author of Adventures Among Spiritual Intelligences: Angels, Aliens, Dolphins & Shamans.

“Although Timothy is no longer with us in the conventional sense, he is very much alive in the latest of his Rebel Angels series. As millennium-spanning actors in this ongoing cosmic play, we are amused, stimulated, and entranced.”

– Gordon Phinn, author of You Are History: The Soul, The Higher Self, and Our Share of Divinity

“On a visit to Timothy’s home in a remote part of New Mexico, I had occasion to witness him in the deep communion with Georgia that was required to generate this series of unforgettable volumes. There he sat in the utterly unique home he himself had designed. Around him was perhaps the most impressive private library I have ever seen, and his own visionary art lined the walls. I knew then what I know now: Timothy Wyllie stands in a class all by himself as a contributor to the emerging literature influenced by the Urantia Revelation. His literary and artistic legacy will remain invaluable for decades to come.”

– Byron Belitsos, author of Your Evolving Soul:The Cosmic Spirituality of the Urantia Revelation

"An extraordinary and inherently fascinating contribution to the growing library of channeled metaphysical studies that is also readily available in a digital book format (Kindle, $14.99), The Rebel Angels Among Us: The Approaching Planetary Transformation will prove to be of special and particular interest to dedicated students of the metaphysical sciences and New Age spirituality."

By Timothy Wyllie
LIST PRICE $14.99
PRICE MAY VARY BY RETAILER