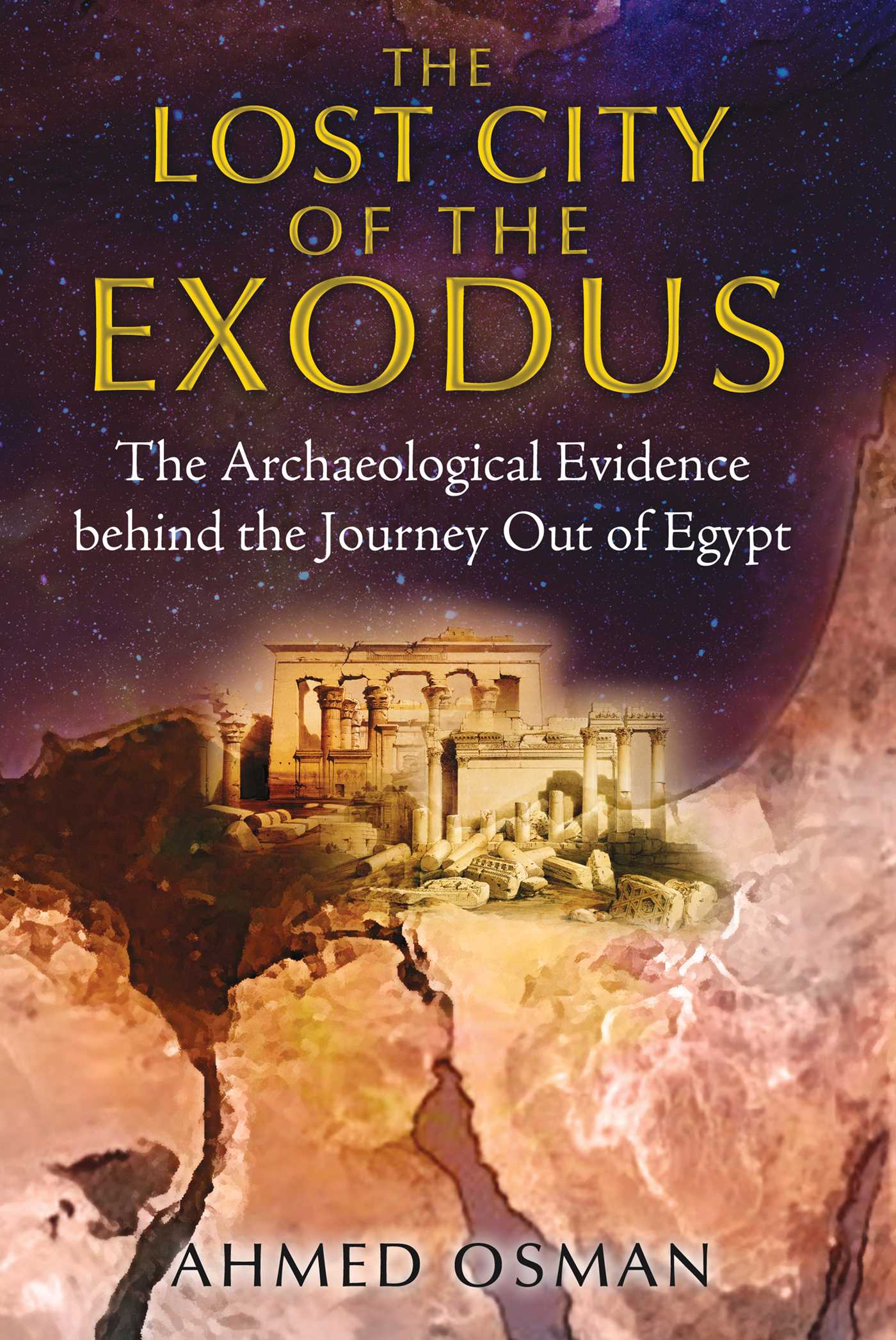 • Explains why modern scholars have been unable to find the city of the Exodus: they are looking in the wrong historical period and thus the wrong region of Egypt

• Details the author’s extensive research on Hebrew scriptures and ancient Egyptian texts and records, which allowed him to pinpoint the Exodus site

• Reveals his effort to have his finding confirmed by the Egyptian government, including his debates with Zahi Hawass, Egyptian Minister for Antiquities Affairs

When the first archaeologists visited Egypt in the late 1800s, they arrived in the eastern Nile Delta to verify the events described in the biblical Book of Exodus. Several locations believed to be the city of the Exodus were found but all were later rejected for lack of evidence. This led many scholars to dismiss the Exodus narrative merely as a myth that borrowed from accounts of the Hyksos expulsion from Egypt. But as Ahmed Osman shows, the events of Exodus have a historical basis and the ruins of the ancient city of Zarw, where the Road to Canaan began, have been found.

Drawing on decades of research as well as recent archaeological findings in Egypt, Ahmed Osman reveals the exact location of the lost city of the Exodus as well as his 25-year effort to have this finding confirmed by the Egyptian government, including his heated debates with Zahi Hawass, former Egyptian Minister for Antiquities Affairs. He explains why modern scholars have been unable to find the city of the Exodus: they are looking in the wrong historical period and thus the wrong region of Egypt. He details his extensive research on the Pentateuch of the Hebrew scriptures, the historical scenes recorded in the great hall of Karnak, and other ancient source texts, which allowed him to pinpoint the Exodus site after he discovered that the Exodus happened not during the pharaonic reign of Ramses II but during that of his grandfather Ramses I.

Osman concluded that the biblical city of the Exodus was to be found at Tell Heboua at the ruins of the fortified city of Zarw, the royal city of Ramses I--far from the Exodus locations theorized by previous archaeologists and scholars. In 2012, after 20 years of archaeological work, the location of Zarw was confirmed by Egyptian officials exactly where Osman said it would be 25 years ago. Thus, Osman shows that, time and again, if we take the creators of the source texts at their word, they will prove to be right.

CHAPTER 2
WHO WROTE THE EXODUS STORY?

The Israelites’ Exodus from Egypt, as it is described in the Bible, was taken to represent a true historical account for more than two thousand years. Traditionally thought to be written by Moses, the Exodus story was believed to be the inspired word of God given to his prophet. Nevertheless, the question of how the Bible story has come down to us from the time of Moses has been the subject of continuing debate. People felt that the narration included a number of accounts coming from different sources. They also recognized that some parts of the story must have come from other authors and belonged to different times. For all these points, which were raised concerning the origins of the Pentateuch, people have looked to the Church of Rome for their interpretation and guidance to help them understand.

This situation changed after the Protestant Reformation in the sixteenth century, which challenged the authority of Rome as the only interpreter of the scriptures. Scholars of the Enlightenment, who promoted science and intellectual interchange, soon entered the scene of biblical scholarship. They started to point to long lists of inconsistencies, contradictions, and anachronisms in the Pentateuch. As a result, Western philosophers began to challenge the accuracy of the Bible, rejecting miracles and advocating reason in place of revelation. In England, Thomas Hobbes (1588-1670), the philosopher who developed some of the fundamentals of European liberal thought, noticed some textual discrepancies and suggested that Moses could not have written the Pentateuch alone. Twenty years later, Baruch de Spinoza (1632-1677), the Dutch pantheist-rationalist, completely rejected the Mosaic authorship of the Pentateuch and denied the possibility of divine revelation. This new liberal movement rejected the idea of God’s revelation and regarded the Bible as an ordinary piece of literature, rather than a divinely inspired text. When they examined it as an ordinary literary text, biblical scholars began to realize that the first five books of the Bible are actually composite works, redacted from different sources.

It was in the eighteenth century, however, that biblical source criticism originated with Jean Astruc, who adapted the methods used for investigating Classical texts to his investigation into the sources of the Book of Genesis. Although the House of Astruc had belonged to a medieval Jewish origin, Jean’s father was a Protestant minister who converted to Catholicism. Jean was educated at Montpellier, one of the great schools of medicine in Europe where he also became a teacher before moving to the University of Paris. In 1753 Jean Astruc anonymously published a work titled Conjectures, where he proposed that the Book of Genesis can be divided, based on the name for God used in different sections. He noticed that some portions utilize Elohim as the name for God, while others use Jehovah (Yahweh). He identified the presence of Elohistic sections from the hand of one source, and Jehovistic sections from the hand of another source. Accordingly, Astruc suggested that Moses must have compiled the first five books of the Old Testament from two sources, which had been transmitted over several centuries, either orally or in written form, and reassembled the ancient memories so as to furnish a continuous narrative, an approach that is called “documentary hypothesis.” Astruc found four documents in Genesis, which he arranged in four columns, declaring that this was how Moses had originally written his books and that an even later writer had combined them into a single work, creating the repetitions and inconsistencies that Hobbes, Spinoza, and others had noted.

About four generations later came Thomas Paine, a British-American revolutionary author who participated in both the American War of Independence and the French Revolution. Paine became one of the founding fathers of the United States of America who signed the Declaration of Independence, along with George Washington and Benjamin Franklin. Paine published the pamphlet The Age of Reason in 1794, 1795, and 1807 in which he saw the Bible as an ordinary piece of literature rather than a divinely inspired word of God, rejecting miracles and advocating reason. Although the British government prosecuted printers and booksellers who tried to publish it in Britain, this book became very popular in the United States and Paine’s ideas inspired many British freethinkers of the nineteenth and twentieth centuries. Those thinkers of the Enlightenment who embraced Isaac Newton’s views of the universe demanded that all things, including God, should be examined according to the laws of nature. As miracles had to be tested before being validated, they rejected the accounts laid out in the Bible of God’s miracles, arguing that miracles are not necessary to prove the existence of God.

In this new intellectual climate of freethinking and scientific approach, Astruc’s ideas about the multiple origin of the Pentateuch were developed, chiefly in Germany, in the first half of the nineteenth century. Here biblical scholars became able to identify, not two, but four different sources behind the contents of the Pentateuch. These scholars were followed by K. H. Graf, who suggested in 1865 that the sections using the name Elohim, then assumed to be the earliest of the sources, was, in fact, the later document, compiled at the time of Ezra the priest in the fifth century BCE, when Jewish scholars returned from Babylon to Jerusalem. This attempt by Graf to assign dates to the different documents started a new branch of study known as “historical criticism.” As a result, Bible scholars started to use the way a text is written--changes in style, vocabulary, repetitions, and the like--to determine the different sources that were used by a biblical author and the date when it was written. Before the historical reliability of the biblical narratives of the Exodus can be judged, one needs to know as much as possible about how the various accounts were written, who wrote them, why they were written, and the sources of information available to their authors.
Ahmed Osman

“Ahmed Osman has done it again! Combining meticulous research with a sharp mind, Osman’s The Lost City of the Exodus reads like an Agatha Christie whodunit and a Dan Brown thriller rolled into one! This literary gem of a book provides the long-awaited smoking-gun evidence and hard-to-refute arguments that show where, how, and when the biblical Exodus took place. A brilliant tour-de-force!”

– Robert Bauval, author of The Vatican Heresy, Black Genesis, and The Orion Mystery