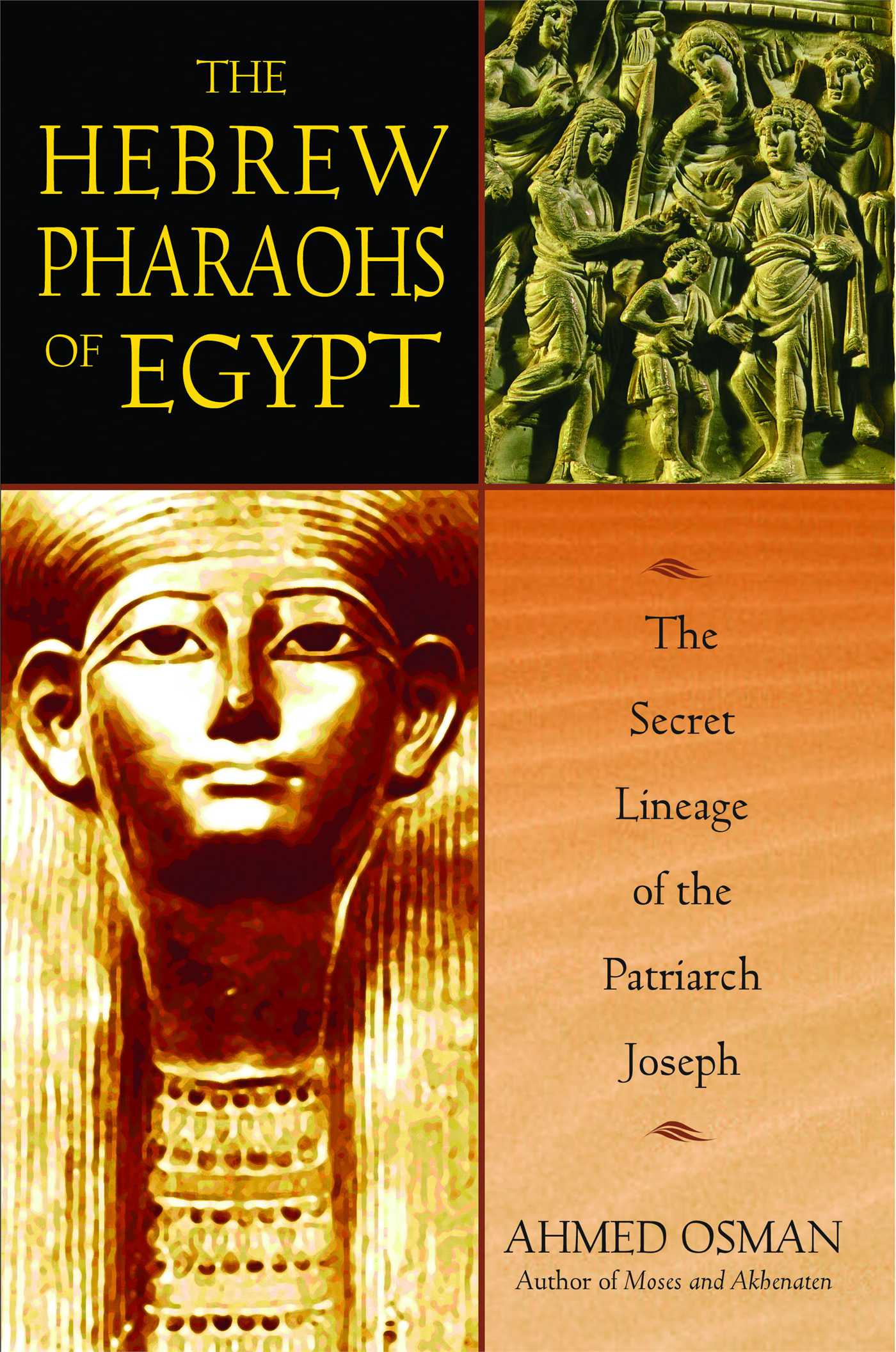 By Ahmed Osman
LIST PRICE $16.00
PRICE MAY VARY BY RETAILER

A reinterpretation of Egyptian and biblical history that shows the Patriarch Joseph and Yuya, a vizier of the eighteenth dynasty king Tuthmosis IV, to be the same person

• Uses detailed evidence from Egyptian, biblical, and Koranic sources to place Exodus in the time of Ramses I

• Sheds new light on the mysterious and sudden rise of monotheism under Yuya’s daughter, Queen Tiye, and her son Akhnaten

When Joseph revealed his identity to his kinsmen who had sold him into slavery, he told them that God had made him “a father to Pharaoh.” Throughout the long history of ancient Egypt, only one man is known to have been given the title “a father to Pharaoh”--Yuya, a vizier of the eighteenth dynasty king Tuthmosis IV. Yuya has long intrigued Egyptologists because he was buried in the Valley of Kings even though he was not a member of the Royal House. His extraordinarily well-preserved mummy has a strong Semitic appearance, which suggests he was not of Egyptian blood, and many aspects of his burial have been shown to be contrary to Egyptian custom.

As The Hebrew Pharohs of Egypt shows, the idea that Joseph and Yuya may be one and the same person sheds a whole new light on the sudden rise of monotheism in Egypt, spearheaded by Queen Tiye and her son Akhnaten. It would clearly explain the deliberate obliteration of references to the “heretic” king and his successors by the last eighteenth dynasty pharaoh, Horemheb, whom the author believes was the oppressor king in the Book of Exodus. The author also draws on a wealth of detailed evidence from Egyptian, biblical, and Koranic sources to place the time of the departure of the Hebrews from Egypt during the short reign of Ramses I, the first king of the nineteenth dynasty.

from Chapter 9: The Egypt of Joseph

The other indications that Joseph lived in Egypt during the Eighteenth Dynasty, rather than more than two centuries earlier during the Hyksos period, are inevitably fragmentary, but so compelling that it seems remarkable that nobody has gathered them all together before and drawn from them the obvious conclusion. To place them in the same chronology as the story of Joseph in the Pentateuch and the Koran.

Slavery in Ancient Egypt
And Joseph was brought down to Egypt; and Potiphar, an officer of Pharaoh, captain of the guard, an Egyptian, bought him of the hands of the Ishmaelites, which had brought him down thither. (Genesis 39:1)

When might such a slave transaction have taken place in ancient Egypt? As Donald B. Redford pointed out in his book A Study of the Biblical Story of Joseph, Asiatics had probably been present in Egypt from the beginning of her history. Punitive raids by the Egyptian army had been responsible for some, while others must have arrived by other means, perhaps as free aliens who, as guests, had been permitted to enter Egypt along with goods from Syria procured through trade. Under Amenemhet III, and during the Thirteenth Dynasty, a fairly sizeable foreign element can be detected in the population of Egypt. The Asiatics who appear in the roster of workers at the Sinai mines seem to be there because of their specialised skills. There are donkey drivers, soldiers and even chieftains from Palestine. This bespeaks co-operation between Egyptians and Asiatics, not enslavement of the latter by the former.

Around the middle of the sixteenth century B.C., with the beginning of the Eighteenth Dynasty after the Hyksos expulsion, slaves of Palestinian or Syrian origin began to appear in Egypt in large numbers. This influx was the result of military conquest in Asia where Tuthmosis III's campaigns alone are said to have brought seven thousand captives. These prisoners were regarded as Royal property, and it was the king, as we saw in the case of Ahmose, who could give them to his officers or assign them to the temple. There is also evidence that slaves were bought and sold for silver or property during the Eighteenth Dynasty. Abd el-Mohsen Bakir, the Egyptian scholar, in his research concerning slavery in the different periods of ancient Egypt, was able to find some legal documents, referring to transactions involving slaves and starting from the Eighteenth Dynasty. He concluded his account in Slavery in Pharaonic Egypt by saying: "From the evidence before us, slavery, strictly speaking, existed between the Eighteenth and Twenty-second Dynasties, while before and after that period only various degrees of 'bondage' can be demonstrated."

It therefore follows that, if the story of Joseph in the Pentateuch is giving a factual report of his being sold into Egypt as a slave, by merchants for silver, this account could not possibly be accurate unless the transaction took place at some time between the Eighteenth and Twenty-second Dynasties.

Their Names
The only known reference to Yuya before the discovery of his tomb was in the scarab issued by Amenhotep III in celebration of his marriage to Yuya's daughter, Tiye. It seems the king wanted everyone to know the name of the woman he had made his queen against the customs of his country. Copies were sent to foreign princes, reading in part ". . . the Great King's-Wife Tiye, who liveth. The name of her father is Yuya, the name of her mother is Tuya . . ." It was only then that the identity of Tiye's parents became known: earlier she had been thought to be a Mesopotamian princess from Mitanni, sent to Egypt to marry the king.

Only four letters were used by the scribes and craftsmen who wrote Yuya's name on the objects in his tomb:

alef or yodh phonetic value A or Y

There was a fifth sign, called a determinative, that has no phonetic value and is merely inserted to help us to understand the meaning. In this particular case it indicates that the preceding letters are to be read as a man's name. Although only four signs were used, the result was a pronounced variation in the way Yuya's name was spelled. In all there are eleven spellings:

The name is written in all but two cases as two syllables--Yu on the lid of an ushabti box (although inside the same syllable is repeated as Yu-Yu) and Ya on a coffin. Every syllable begins with the letter 'Y', which in this case has to be read as a consonant because an Egyptian syllable cannot start with a vowel.
Ahmed Osman

“A startling new theory that brings to life the biblical world of Joseph and places it firmly in the lead-up to Ancient Egypt’s most controversial period of history.”

– Andrew Collins, author of From the Ashes of Angels and Gods of Eden

“In The Hebrew Pharaohs of Egypt, Ahmed Osman single-handedly moves the goal posts of biblical scholarship. He successfully narrows the search for the historical Hebrew patriarchs by giving us a novel and persuasive case for a secret lineage of the patriarch Joseph. This is a ‘must read’ for all alternative history buffs and scholars alike.”

– Rand Flem-Ath, coauthor of When the Sky Fell and The Atlantis Blueprint

“. . . a fascinating and thought-provoking read. It is thoroughly well researched and convincingly argued.”

– Graham Phillips, author of Atlantis and the Ten Plagues of Egypt

By Ahmed Osman
LIST PRICE $16.00
PRICE MAY VARY BY RETAILER