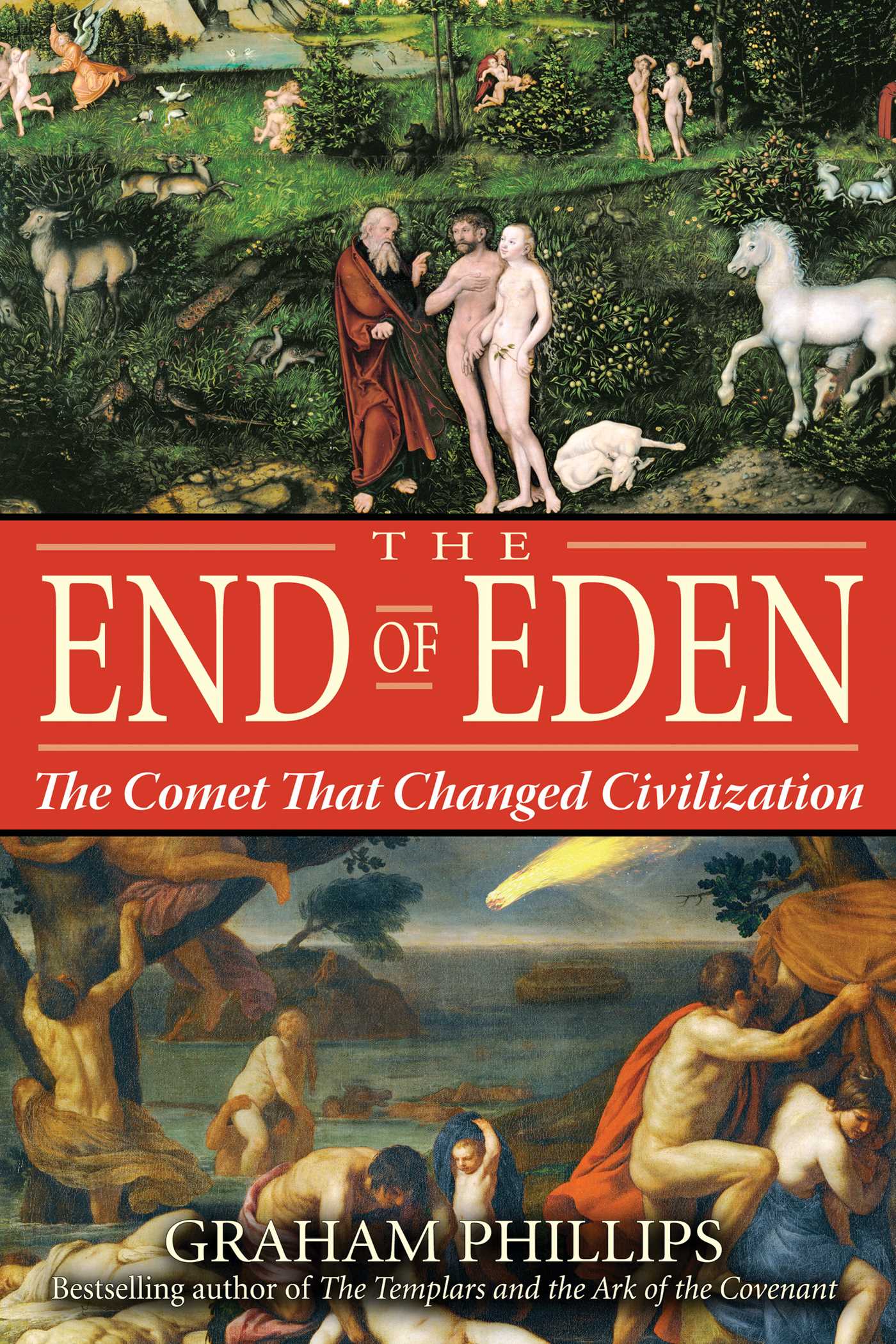 Presents compelling evidence that civilizations worldwide became warlike and monotheistic after Earth passed through the tail of a comet in 1500 B.C.

In the year 2024, the comet 12P/Pons-Brooks is due to pass near Earth again for the first time in 3,500 years. In 1500 B.C., Earth passed through this comet’s tail, and in the decade following, cultures the world over began to exhibit significant aggressive tendencies. Civilizations in India, the Middle East, China, Japan, Europe, and Central America suddenly abandoned their peaceful ways and devoted themselves with uncharacteristic fervor to making war on their neighbors and fighting among themselves.

But this was not the only effect that is linked to this celestial event. Sudden outbreaks of monotheism--the worship of a single god, and a new idea at the time--occurred simultaneously in locales spread widely throughout the world. Most of these monotheistic religions represented their god symbolically as a circle with a series of lines extending below--resembling a simple drawing of a comet.

In The End of Eden, Graham Phillips chronicles the sudden shifts in social demeanor and religious philosophy that swept the world in the wake of 12P/Pons-Brooks. He argues that there is no other explanation for these changes other than the presence of this massive comet in the skies above Earth. He contends that debris in the comet’s tail contaminated the atmosphere with a chemical known to cause aggressive behavior, and that after little more than a decade, worldwide hostility abruptly abated. He also explores how the appearance of a celestial body that outshone the moon would have been interpreted as a significant religious event--the premier appearance of a powerful new god to supplant the deities previously worshipped around the world.

ONE OF THE GREAT UNSOLVED MYSTERIES of the ancient world is the enigma of Stonehenge: not only why it was built, but what happened to the people who built it. Those who constructed this great monument were of the Megalithic culture, named after the megaliths--circles of standing stones, some even bigger than Stonehenge--which they erected in vast numbers all over the British Isles. As the Megalithic people had no form of writing, it is unknown why they created these mysterious structures, but archaeology has revealed that they began building them as early as 3500 BC. It has also been discovered that the Megalithic culture was remarkably peaceful. For two millennia they left no evidence of organized warfare or tribal feuding, and the only weapons they manufactured were suitable merely for hunting. Then, almost overnight, everything changed. Carbon dating has shown that sometime around 1500 BC the Megalithic people abandoned their monuments, built defensive hill forts, and began to manufacture swords and battle axes. DNA tests on the bones unearthed from graves of this period show no evidence of foreign invasion; neither do excavated animal or plant remains hold evidence of climate change to account for the sudden onset of civil strife. For some completely unknown reason, this peaceful 2000-year-old civilization seems to have ended by tearing itself apart.

The mysterious demise of the Megalithic culture is strange enough, but what is even more baffling is that at precisely the same time, on the other side of the Atlantic, something very similar was happening. The oldest known civilization in Central America was the Olmec civilization, which flourished in Mexico from around 1200 BC. However, five hundred years earlier, the Olmec ancestors were well on the way to establishing a civilization by erecting stone monuments and building elaborate tombs and earthen pyramids. Like the Megalithic civilization in Britain, this first Olmec culture was surprisingly peaceful. Of all the graves excavated from this period, not one includes the remains of a single human being who appears to have died in combat. But then it all came to an abrupt end. Excavations of these early Olmec settlements reveal that their populations suddenly began to massacre one another. Many villages were burned to the ground, while mass graves from the period contain skeletons with crushed skulls, broken limbs, and other evidence of battle wounds. Carbon dating, accurate to within around fifty years, places the violent end of this early American culture to between 1520 and 1470 BC--exactly the same period as the Megalithic culture came to a violent end in Britain.

The fact that two civilizations, separated by a vast ocean, should simultaneously have suffered an identical fate is perplexing enough, but more strange is that at exactly the same time other previously peaceful societies elsewhere in the world also succumbed to what can only be described as an epidemic of mass aggression. From the surviving written records of the advanced civilizations in the Middle East in 1500 BC, we find greater detail of what transpired.

For 2000 years, even though they were technologically far superior to their neighbors, the Egyptians never attempted to build an empire. Then, in 1486 BC, the pharaoh Tuthmosis III began an unprecedented campaign of military conquest. He led his armies east into what is now Israel, south into Nubia, and west into Libya. At exactly the same time, Mitanni, a hitherto pacifist kingdom in Syria, also embarked on a sudden and senseless rampage. It began when its king Shaushatar led a surprise attack against the friendly kingdom of Assyria in northern Iraq. Shaushatar’s actions have long mystified historians, as his country had previously been so nonaggressive that it had never bothered to form an army. Even stranger was that Shaushatar led his new army south on what amounted to a suicidal assault on the mighty Egyptians. Vastly outnumbered, the inexperienced Mitanni soldiers were annihilated. Egyptian tomb inscriptions of this period note with amazement how the Mitanni hordes charged mindlessly toward the Egyptians in waves, only to be repeatedly cut down by showers of arrows.

At the same time in Cappadocia, in southern Turkey, ordinary people took to butchering one another in their own homes. For 1000 years, the ancient Cappadocians had enjoyed a tranquil existence in communal settlements cut into the wind-sculpted rocks of the Korma Mountains. From contemporary Assyrian records we learn that the inhabitants of these rock-dwellings abhorred violence and believed that all life was sacred. Then suddenly, sometime in the mid 1480s BC, these gentle people were seized by some kind of mass psychosis. Assyrian texts describe the Cappadocians fighting among themselves with unbridled savagery: brother slew brother and men threw their women and children from cliffs. One account speaks of a visitor to Korma finding not a single person left alive. Archaeology supports such accounts, revealing that the hundreds of rock-dwellings were suddenly abandoned in the early fifteenth century BC and remained uninhabited for generations.

It is overwhelmingly clear that around 1500 BC something quite extraordinary was happening throughout the world. Something was driving even the most peace-loving peoples to shocking acts of brutality and frenzied bloodlust--and it wasn’t overpopulation, famine, lack of resources, or climate change. Few historians have addressed this mystery, given that there was no cultural link between many of the civilizations involved. It has all been put down to coincidence. Surely, though, there has to have been more to it. Was there perhaps something else entirely that might have commonly afflicted people separated by thousands of miles?

There was indeed another amazing “coincidence” around 1500 BC: in civilizations across the world an almost identical image suddenly made an appearance in decorative carvings and tomb paintings. It depicts a shining disc hanging in the sky above scenes of battle. Could there be a connection? Preserved in the so-called Secret Archives of the Vatican in Rome, there survives an ancient Egyptian account that suggests that this heavenly body might actually have been a comet.
Graham Phillips

“Graham Phillips argues persuasively that Earth encountered a massive comet 3,500 years ago around the time of the Exodus from Egypt. The object appeared twenty times larger than the full moon and was by far the largest comet sighting ever recorded by ancient historians. The worldwide consequences for mankind were devastating. Our own scientific research confirms that the author’s theory is completely credible.”

– Allen West, coauthor of The Cycle of Cosmic Catastrophes

“In an extraordinary tour de force, Graham Phillips pinpoints a major mystery with important implications for our understanding of the remote past and the origins of ancient religion. Painstakingly researched and soberly presented--but never less than eminently readable--this book provides an answer so explosive that it should instantly ensure itself a place among the great revelations of history.”

– Lynn Picknett and Clive Prince, authors of The Templar Revelation and The Sion Revelation

“This is a very exciting and important book, which suggests a highly plausible reason why organized cruelty seems to have come into the world at a surprisingly late date. I believe Graham Phillips’s ideas are going to cause widespread controversy.”

– Colin Wilson, author of The Outsider and Atlantis and the Kingdom of the Neanderthals: 100,000 Years

"An intriguing 'must' new age collections will relish."

"The theory {Phillips] puts forth in The End of Eden is nothing short of paradigm-shattering, if true."

"The material in this work is well-organized. The author's style is very readable and accessible to non-experts. For those wishing to delve deeper into source materials, there are excellent endnotes and a full bibliographpy."

– Lynn Picknett and Clive Prince, authors of The Templar Revelation and The Sion Revelation