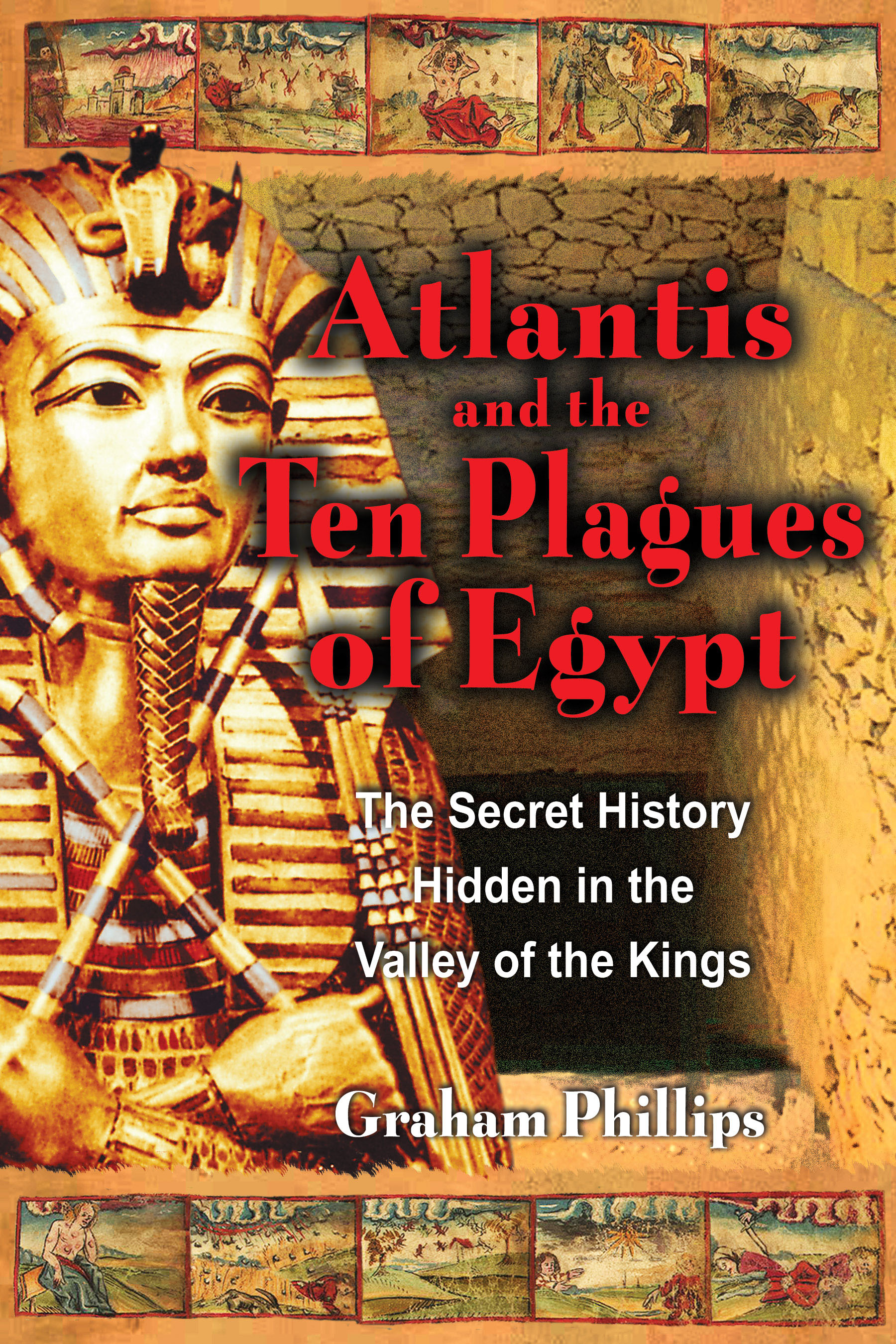 Atlantis and the Ten Plagues of Egypt

The Secret History Hidden in the Valley of the Kings

• Reveals that Tomb 55 in the Valley of the Kings was designed not to keep intruders out, but to trap something inside

In Atlantis and the Ten Plagues of Egypt, Graham Phillips explores the excavation of a mysterious and ritually desecrated tomb in the Valley of the Kings, Tomb 55, which he contends holds the key to the true history of the destruction of Atlantis. Unlike other Egyptian tombs designed to keep intruders out, Tomb 55 was constructed to keep something imprisoned within, specifically Smenkhkare, the older brother of Tutankhamun who was deemed responsible for the ten plagues in Egyptian history, to prevent such tragedies from ever happening again. The forensic findings from this tomb coupled with compelling new evidence from the polar ice caps provide sensational evidence that the parting of the Red Sea, the deaths of the first born, and the other plagues that afflicted Egypt were all actual historical events.

Core samples from the polar ice caps indicate that a gigantic volcanic eruption took place in the eastern Mediterranean around the time of Amonhotep’s reign. Other research suggests this to have been the time of the eruption that destroyed the Greek island of Thera, one of the likely locations of Atlantis, and that the subsequent cataclysm may explain the unusual lack of resistance to the new religion installed by Amonhotep’s son, Akhenaten, when he took power several years later.

The Angel of Death

Let us try to imagine the ancient city of Thebes immediately after the fallout cloud has dispersed. The lush strip of land to either side of the Nile now appears as barren as the surrounding desert, with ruddy-streaked, grey ash blanketing everything like the surface of the moon. Charred trees, having been set ablaze by falling cinders, now stand smouldering in stark silhouette, like black skeletal fingers clawing at the sky. On the river banks, boats lie abandoned, some broken apart, others beached high on the embankment by the great waves that have surged upstream. The carcasses of animals - goats, donkeys, cattle - lie stiff and cold, their open mouths a frozen testament to their last lungfuls of choking ash. The Nile is now a parody of its lifegiving self, with dead fish floating along on a stinking foam of red mud. A bizarre cacophony fills the air: muffled moans drifting from buildings, the howling of dogs out in the desert, the hiss of volcanic dust as it streams from the rooftops of temples, palaces and shrines.

Through the smoke which hugs the ground like a morning mist, the survivors emerge one by one. Some are unscathed, but their eyes are wide with horror; some are covered with sores, their eyes bloodshot and swollen. Filing into the streets, they huddle together, in shocked silence. Someone points to the sky. The others look up - the sun shines sickly green overhead!

In the great temple of Karnak, the priesthood gathers in secret conclave, away from the staring image of Amun-Re. Surely they have carried out all the prescribed rites, observed all the necessary festivals, attended to all the god's needs. What more should they do to serve? In the palace, the pharaoh consults frantically with his ministers. He is the son of the god. How can he restrain the wrath of his divine father?

An answer is found in the ancient texts. Once before, at the dawn of time, the goddess Sekhmet had tried to destroy mankind. She is the goddess of devastation, of carnage and destruction. It is she who must be appeased. She must be made supreme goddess and worshipped by all Egypt.

Far to the north, in the north-east Delta, followers of the cult of Re have been spared. They hear of the devastation inflicted on the south and all agree - it is their god who has been enraged. The cult of Amun has gone too far. The statues, the temples, the shrines, that cover the land are erected in the name of Amun-Re. Re must be revered in his own right - no longer as an aspect of a lesser god. The once supreme deity of all Egypt must be supreme again. If not, then he will no longer curb his rage.

The governor of Lower Egypt and heir to the throne, the young Amonhotep, does not agree. This, he says, has been the work of the Hebrews' God. They too have been spared. It is their God who must be worshipped if the world is to live. Overhead, the sun still shines forth its vile green rays, casting an eerie glow over the land of the Nile. There can be no doubt that this is a sun-god's deed. Perhaps the God of the Hebrews and the sun-god Re are one and the same! Yet the Hebrew God is the only god and he has no name! It must be Re in his aspect as the Aten - the sunlight that shines over all - that is the true god of mankind.

The weeks pass. Back in Thebes, the priests have made Sekhmet the divine consort of Amun-Re, hundreds of her statues line the temple precincts, and the pharaoh issues up daily prayers to the new goddess. Yet still the sun shines green. Worse! Plagues of locusts have ravished the crops, descending in their thousands to devour the city's food. Swarms of flies and stinging insects fill the air. Why has the goddess not been appeased?

When Prince Amonhotep returns to Thebes and proclaims his new god, many flock to his side. He tells them how the north has been spared, and how, if they adore the Aten, and make him king, they too shall live in a pure land. As more and more follow the new prophet, the skies are cleansed and the pestilence retreats. Egypt has been saved! The young Amonhotep is accepted by all alike - the priesthood, the soldiery, the people - as the sole voice and true son of the one and only god. Even the king concedes to his son's demands. He is made co-regent and appointed with full pharaonic power. He is the pharaoh Amonhotep IV. He is Akhenaten - 'The living spirit of the Aten'.

This may not be exactly how it happened, but Atenism would appear to have come about under circumstances somewhere along these lines. The important point is that when Akhenaten came to the throne he appears to have enjoyed wide support. Within five years he was building a completely new capital, two years later the entire administration had moved there, and two years after that Atenism had fully developed into what we would now consider a modern religion.
Graham Phillips

“Graham Phillips’s real contribution to what might be called the world of alternative ancient history is his connection of the natural disasters and ­phenomena described in Exodus with the eruption of Thera. . . . Plausibly argued.”

Atlantis and the Ten Plagues of Egypt

The Secret History Hidden in the Valley of the Kings