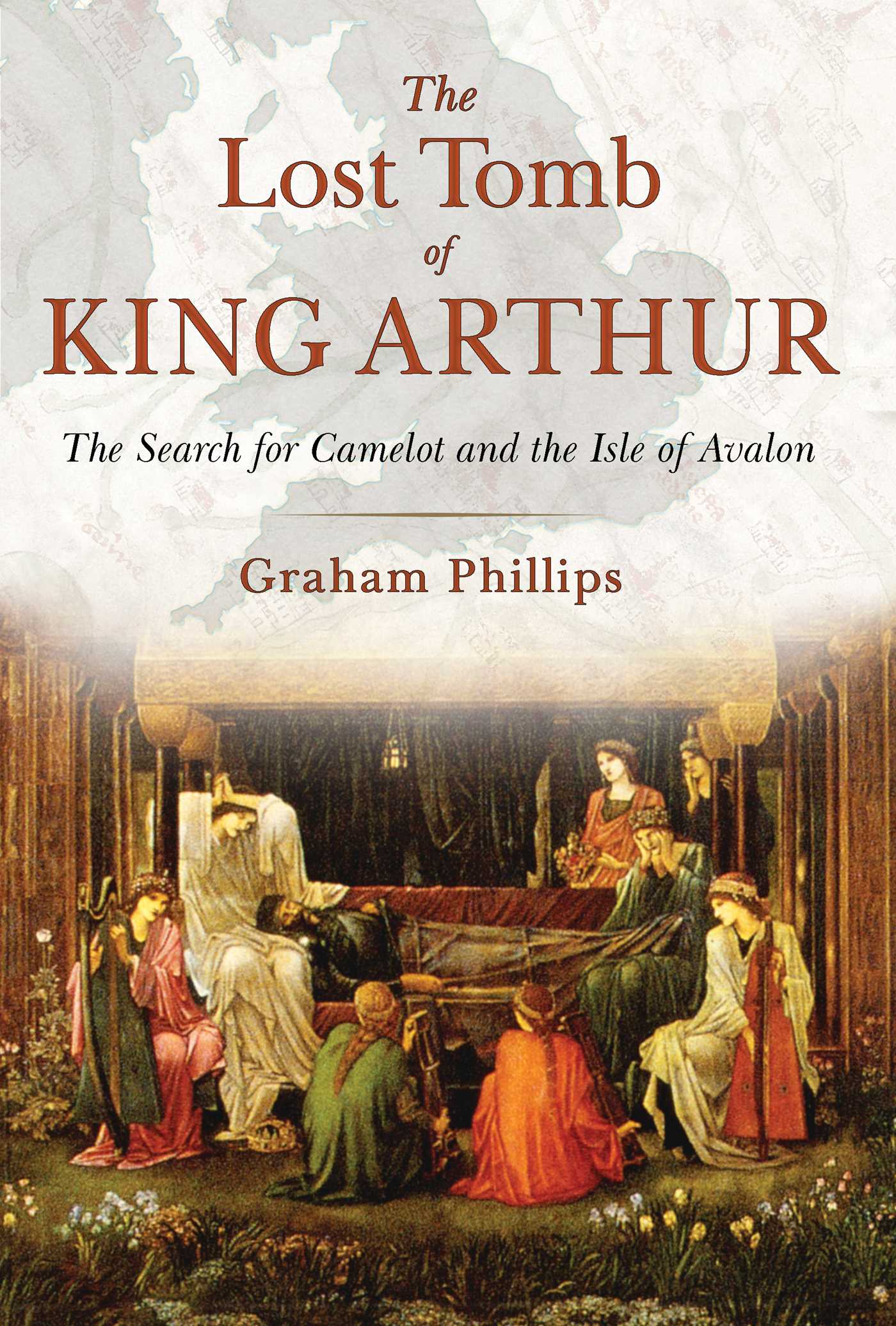 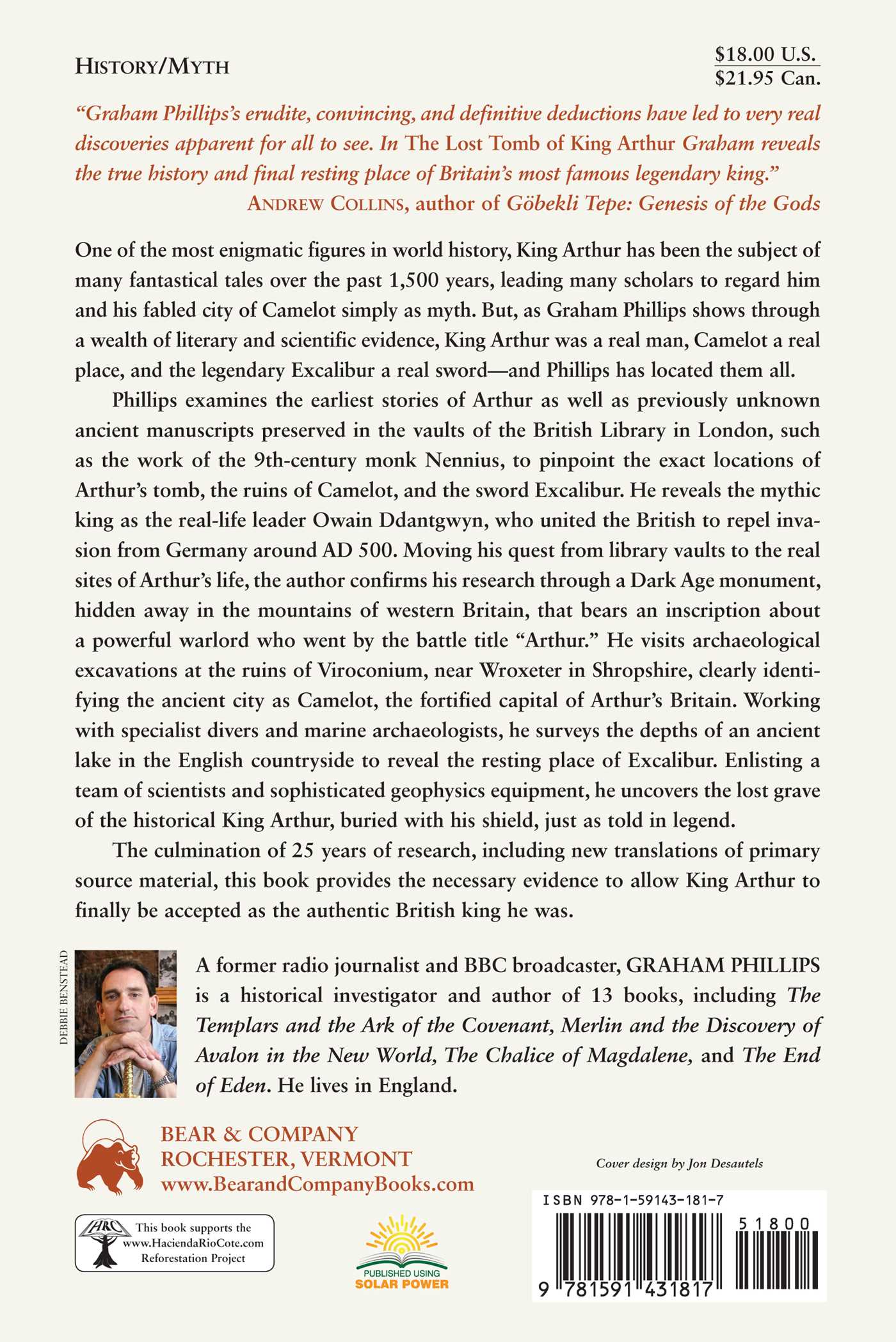 By Graham Phillips
LIST PRICE $18.00
PRICE MAY VARY BY RETAILER

• Pinpoints the exact locations of Arthur’s tomb, the ruins of Camelot, and the sword Excalibur using literary research and the latest geophysics equipment

• Reveals the mythic king as the real-life leader Owain Ddantgwyn, who united the British to repel invasion from Germany around 500 AD

One of the most enigmatic figures in world history, King Arthur has been the subject of many fantastical tales over the past 1500 years, leading many scholars to regard him and his fabled city of Camelot simply as myth. But, as Graham Phillips shows through a wealth of literary and scientific evidence, King Arthur was a real man, Camelot a real place, and the legendary Excalibur a real sword--and Phillips has located them all.

Phillips examines the earliest stories of Arthur as well as previously unknown ancient manuscripts preserved in the vaults of the British Library in London, such as the work of the 9th-century monk Nennius, to pinpoint the exact locations of Arthur’s tomb, the ruins of Camelot, and the sword Excalibur. He reveals the mythic king as the real-life leader Owain Ddantgwyn, who united the British to repel invasion from Germany around 500 AD. Moving his quest from library vaults to the real sites of Arthur’s life, the author confirms his research through a Dark Age monument, hidden away in the mountains of western Britain, that bears an inscription about a powerful warlord who went by the battle title “Arthur.” He visits archaeological excavations at the ruins of Viroconium, near Wroxeter in Shropshire, clearly identifying the ancient city as Camelot, the fortified capital of Arthur’s Britain. Working with specialist divers and marine archaeologists, he surveys the depths of an ancient lake in the English countryside to reveal the resting place of Excalibur. Enlisting a team of scientists and sophisticated geophysics equipment, he uncovers the lost grave of the historical King Arthur, buried with his shield, just as told in legend.

The culmination of 25 years of research, including new translations of primary source material, this book provides the necessary evidence to allow King Arthur to finally be accepted as the authentic British king he was.

Could the ruins of Viroconium be those of the historical Camelot? On visiting the site of this old Roman city I was astonished to find that it stood in quiet countryside just outside the tranquil village of Wroxeter, in central England. The remains of most Roman ruins are situated at the heart of modern cities, many of their ancient secrets buried beneath office blocks, apartment buildings, and busy streets. By contrast, the foundations of Viroconium--including a section of wall around thirty feet high, the largest free-standing Roman ruin in all England--can still be seen today. What now survives above ground is what had been the heart of Viroconium, including a basilica, a bath house, and recreational hall, together with administrative structures, and a public forum. The city had been a thriving metropolis in Roman times, but what about the period Arthur seems to have led the Britons, around AD 500, some ninety years after the Roman legions departed? Did it still survive, or had it been abandoned? A small museum stood on the site, so I interviewed the curator. He explained that as the remains of Viroconium were in open countryside they provided an excellent opportunity for excavation, and much archaeological work had been conducted there. It not only revealed much about the city during Roman times, but during the post-Roman era--the period King Arthur is said to have lived.

In the mid-1960s an extensive archaeological excavation was initiated at the Viroconium site. It was to last for over a decade, bringing to light a series of remarkable discoveries. The dig, led by archaeologist Philip Barker from the University of Birmingham, produced a mass of evidence for the period following the end of Roman rule. The results showed that rather than being abandoned for a more defensive site, like so many other Roman towns of the time, Viroconium not only continued to be occupied but was rebuilt and refortified. From the excavation of post holes, and other tell-tale signs in the foundations and substructure of the city, the new buildings were found to have been made primarily of timber, not bricks and mortar like the earlier Roman town. When the evidence emerging from the dig was collated, these new buildings were discovered to have been highly sophisticated. From the timber remains, it was possible to ascertain that the buildings were large and elaborate constructions of Roman design, with colonnades and orderly facades, many being several stories high. It appears, therefore, that shortly after the Romans left, Viroconium assumed a new importance. A second stage of rebuilding took place in the late fifth century, altogether more grandiose than the first. The excavation in the center of the city showed that the area had been entirely rebuilt. Not only were new buildings erected and streets re-planned, but the infrastructure was also repaired. A new drainage system and fresh water supply was installed through an elaborate arrangement of aqueducts. Long stretches of the Roman cobbled roads were also dug up and relaid. A new kind of town came into existence. Gone was the leisure complex of the imperial occupation, and in its place arose a dynamic trading center and hive of industry. Far from struggling to survive the civil strife inflicting the rest of early Dark Age Britain, Viroconium was a thriving industrial complex, the only example of such prosperity from that time discovered anywhere in the country. Without doubt, it had been the capital of post-Roman Britain right through the fifth century.

When I researched how such a thing was possible, at a time other contemporary cities had been deserted, the inhabitants making their homes in far less elaborated hill forts, I discovered that it was due primarily to two factors. The area around Viroconium had remained prosperous because it contained some of the most fertile land in Britain, and it was situated well away from the invasions of the Anglo-Saxons, Picts, and Irish that occurred in the fifth century. Where many other districts were struggling, suffering famine and fighting for survival, Viroconium was free to prosper. There was additional reason for the city’s fortune. It stood at a vital strategic location. Not only was it centrally placed, but it stood at the heart of the arterial trade routes of the period. At Viroconium, Watling Street, arguably the most important Roman road in Britain, made contact with the River Severn, one of the country’s most significant waterways. Upstream, the Severn penetrates deep into the heartland of Wales; while downstream it arcs across the West Midlands, flowing to the sea through the Bristol Channel. Additionally, the Roman road network linked Viroconium with other important fortifications in the area, such as Forden to the west, Leintwardine to the south, and Chester to the north. Much of this network is still preserved in the pattern of modern roads. The heart of Viroconium was refortified, not with stone walls that needed Roman soldiers to patrol, but with timber stockades built on high earthen banks, surrounded by deep ditches, more than suitable to repel less-equipped warriors and hostile Dark Age warlords.

The nerve center of this new Viroconium appears to have been a massive winged building constructed on the site of the old basilica. It seems to have been a Roman-style mansion, accompanied by a complex of adjoining buildings and out-houses, similar to those that had once been the homes of Rome’s provincial governors. The archaeologists determined that this must have been the seat of the person who had organized the reconstruction of the city--someone who enjoyed considerable power. Archaeologists seldom speculate, but it was quite clear to me who this person had been. The period of rebuilding, around the year 500, corresponded precisely with the purported reign of King Arthur. Moreover, it was the very time that he was said to have ruled from Britain’s most prosperous and powerful city--a city that became known in legend as Camelot.
Graham Phillips

“Graham Phillips’s erudite, convincing, and definitive deductions have led to very real discoveries apparent for all to see. In The Lost Tomb of King Arthur Graham reveals the true history and final resting place of Britain’s most famous legendary king.”

“Another must-read for anyone interested in the often inconvenient truth of history from the audacious and persuasive Graham Phillips. This book will challenge much of what you think you know about Arthur--but in a good way!”

– Lynn Picknett, coauthor of The Templar Revelation and Turin Shroud: In Whose Image? the Truth Behind

“The history of King Arthur, and whether he truly existed, has been studied by many scholarly disciplines--it is an immense jigsaw puzzle. In this book, Graham Phillips brings these pieces together to form a coherent picture of who the historical Arthur actually was. Always engaging and informative, this book penetrates the mystery of one of England’s iconic heritage figures.”

“Just when you thought the legend of King Arthur was a fairytale, Graham Phillips shatters the illusion with historical facts, discoveries, and theories that challenge everything you thought you knew about the once and future king. Compelling read for all questers of the truth.”

– Andrew Gough, writer, presenter, and editor of The Heretic Magazine

By Graham Phillips
LIST PRICE $18.00
PRICE MAY VARY BY RETAILER