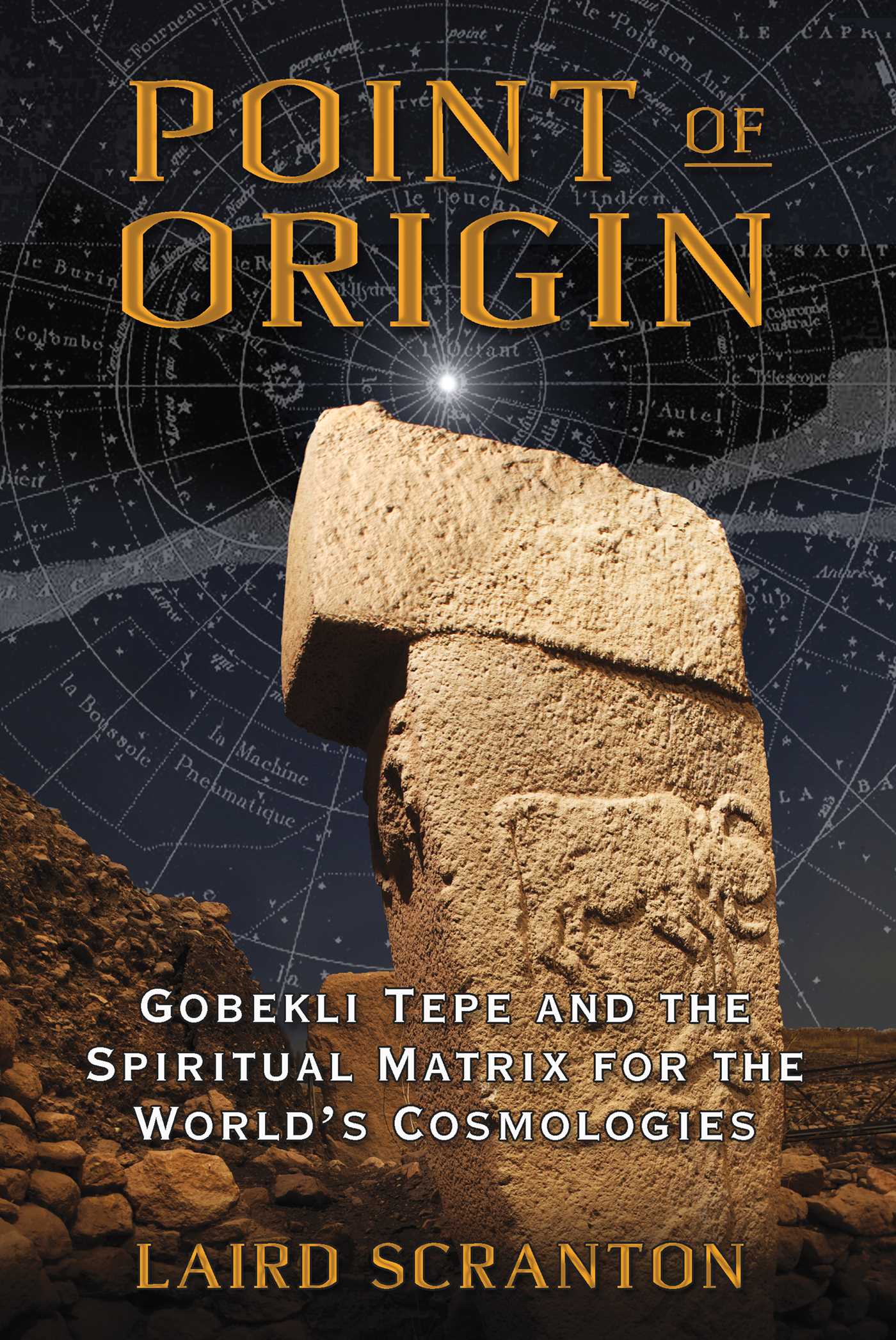 Gobekli Tepe and the Spiritual Matrix for the World’s Cosmologies

• Details how symbolic elements at Gobekli Tepe link a pre-Vedic cult in India to cosmological myths and traditions in Africa, Egypt, Tibet, and China

How could multiple ancient cultures, spanning both years and geography, have strikingly similar creation myths and cosmologies? Why do the Dogon of Africa and the civilizations of ancient Egypt, India, Tibet, and China share sacred words and symbols? Revealing the existence of a long-forgotten primal culture and the world’s first center of higher learning, Laird Scranton shows how the sophisticated complex at Gobekli Tepe in Turkey is the definitive point of origin from which all the great civilizations of the past inherited their cosmology, esoteric teachings, and civilizing skills, such as agriculture, metallurgy, and stone masonry, fully developed.

Scranton explains how the carved images on Gobekli Tepe’s stone pillars were the precursors to the sacred symbols of the Dogon, Egyptians, Tibetans, and Chinese as well as the matriarchal Sakti cult of ancient Iran and India. He identifies Gobekli Tepe as a remote mountain sanctuary of higher knowledge alluded to in Sakti myth, named like an important temple in Egypt, and defined in ancient Buddhist tradition as Vulture Peak. Scranton reveals how Gobekli Tepe’s enigmatic “H” carvings and animal symbolism, symbolic of stages of creation, was presented as a kind of prototype of written language accessible to the hunter-gathers who inhabited the region. He shows how the myths and deities of many ancient cultures are connected linguistically, extending even to the name of Gobekli Tepe and the Egyptian concept of Zep Tepi, the mythical age of the “First Time.”

Identifying Gobekli Tepe not only as the first university but also as the first temple, perhaps built as a civilizing exercise, Scranton definitively places this enigmatic archaeological site at the point of origin of civilization, religion, and ancient science.

Chapter 12
Ancestors, Dual Arms, and the Concept of the Embrace

One of the enigmas we find at Gobekli Tepe are various anthropomorphized features, such as the long arms with hands and stylized belts that are carved in relief on the megalithic pillars. Pillars with these features are surmised to have represented ancestors, a term that is associated in our cosmology with ancient teachers, and a word that has cosmological significance in each of the ancient cultures we’ve studied.

Our first impulse when looking at the carved arms at Gobekli Tepe was that they might have been meant to convey the concept of dualism, similar to Budge’s interpreted meaning for the dual-arm glyph that he pronounces ka. From a cosmological standpoint this interpretation seems sensible, because dualism is defined as a principle of creation. However, several other themes we have explored in relation to Gobekli Tepe suggest the likelihood of another interpretation.

Perhaps the first overt clue to this interpretation is provided by an Egyptian word skhen-t that means “pillar, support.” The pillar is cited by Francesco Brighenti as having symbolized the Earth mother Tana Penu and so calls to mind both the Sakta goddesses and the Gobekli Tepe structures. We relate this term phonetically to the Egyptian word skhen, meaning “to fold in the arms, to embrace, to contain, to hold.”

Symbolically this word reads “to bind with the source of waves,” followed by the image of a clay pot that is situated between two dual arms. The clay pot image, in combination with an image of waves, suggests a possible association with a potbelly, a clay pot filled with water that also represented the Sakta Earth goddess. Additionally, a pillar calls to mind a mythical theme of creation expressed by many ancient traditions in which the Earth was said to have been separated from the sky by the placement of four pillars at the cardinal points of east, west, north, and south. This theme seems to be reflected in an Egyptian word skhenut, which Budge says refers to “the four pillars of the sky.”

In light of these widely varying references, we suggest that the dual arms pictured on the Gobekli Tepe pillars were meant to convey the concept of an embrace between the nonmaterial and material universes. An embrace would constitute the tangible act of “grasping and holding firm” that we associate symbolically with creator deities in our tradition. The same concept could also relate to the admittedly less huggable grasping action of the claws of a bird of prey such as a vulture, birds that also associate symbolically with the earliest creator deities.

Looked at from this viewpoint, Budge defines a word aa-t that means “she who embraces.” Based on our interpretive outlook, this word reads “that which comes to Earth” and defines the dual arms/hands glyph.

We know that the Egyptian concept of an embrace is one that relates symbolically to the processes of matter and, more specifically, to Dogon concepts of the universe and the egg-of-the-world, which is said to “wrap around” or “enclose” seeds of matter. Budge lists a word anh that means “to surround, to enclose, to embrace, to wrap around.” Symbolically the glyphs of this word read “that by which the fish weaves the universe and the egg-of-the-world,” followed by the particle glyph. A second word, anq, means “to embrace, to gather together, to gird around.” Symbolically it reads “that by which the fish weaves mass.”

Another Egyptian word hapt, meaning “to embrace,” seems to symbolically link the concept to a sense of kindredness between the twin universes. One particular spelling that Budge relates to this word is written with the twisted rope glyph that in our view resembles the figure of Amma’s universes. Symbolically, this word reads “two universes (non-material and material) embrace.”

There is another set of interesting Egyptian words meaning “embrace, hug” that are based on the term qena and whose symbolic meanings seem to relate directly to our Sakta Earth goddess and the feminine energy that relates to the Sakti tradition. This word for “embrace” is a homonym for the word qena, which refers to a “bearing pole, litter, portable shrine.” The meaning of “portable shrine” is also of particular interest to us in relation to this discussion because, due to their esoteric nature and the need for secrecy, figures of the Embracing Kangi were traditionally housed in portable shrines. The notion of a portable shrine calls to mind the Mongolian yurt, a kind of mobile stupa.

The “bearing pole” definition is also of interest because we know that the pole was an archaic symbol of the the Sakta goddesses. These words are based on the phonetic root qen, which means “to be strong, to make strong, to fortify, to have power over, to overcome, to conquer, to be master of,” which from the perspective of feminine energy seems comparable to our modern notion of a Queen.

Together, these words and symbols would seem to associate the concept of an embrace--which some would consider to be the warmest, most welcoming, sincere, and personal of gestures--with quite a number of the central themes of our creation plan. An embrace is an action conducted in the human domain that effectively conveys the notion of grasping and holding firm, a phrase that is a hallmark of creator deities in our cosmologies such as Amma and Amen. In the Egyptian hieroglyphic dictionary we find the definition of an embrace given in relation to phonetic roots that refer to ancestors, the ancient teachers credited with having brought instructed civilizing skills to humanity. We also see the concept of an embrace depicted prominently at Gobekli Tepe on megalithic pillars that are believed to symbolize those same ancestors.
Laird Scranton

"It takes great skill to decipher complex information and distill the true meaning that impacts all humankind. Laird Scranton uses a rare blend of logical thinking and physical research that is pushing us forward toward deeper understanding of sacred knowledge.”

“Point of Origin is not a book about Gobekli Tepe, but it sets that mysterious Anatolian hilltop sanctuary into a matrix of interconnected mysteries from all around the world in a way that is both fascinating and thought-provoking.”

“Point of Origin is undoubtedly the pinnacle of research into the world’s ancient cultures, their mysteries and mythologies . . . a truthful and accurate insight into our origins, encompassing religion, astronomy, mythology, and cosmology. This book is indispensable to anyone seeking answers about our origins.”

– E. A. James Swagger, radio host and author of The Newgrange Sirius Mystery

“Learn the language of the Cosmos and explore the mysteries of Gobekli Tepe--the world’s oldest civilization. Another fabulous book on ancient myths and symbols by one of the masters in the field.”

“Once again Laird Scranton greatly expands our understanding of the ancient world through his relentless and meticulous research of language and symbol. This knowledge was to be preserved and passed down through the ages for a time in the future when the information would be vitally important for the survival of humanity. That time is now!”

"Laird Scranton's latest book is great! It is a work of genius with wide-ranging implications, yet it is clear and simple, so engaging! Great!"

– Barbara Hand Clow, author of Revelations of the Ruby Crystal

“If you are as avid a searcher for the truth about the evolution of our cosmos and the origin of our civilizations as I am, you owe it to yourself to run, not walk, to your nearest bookstores and order Laid Scranton’s latest book. This is the fifth in his series on ancient cosmologies and languages, and it’s a whopper! Scranton has done his homework … ”

Gobekli Tepe and the Spiritual Matrix for the World’s Cosmologies