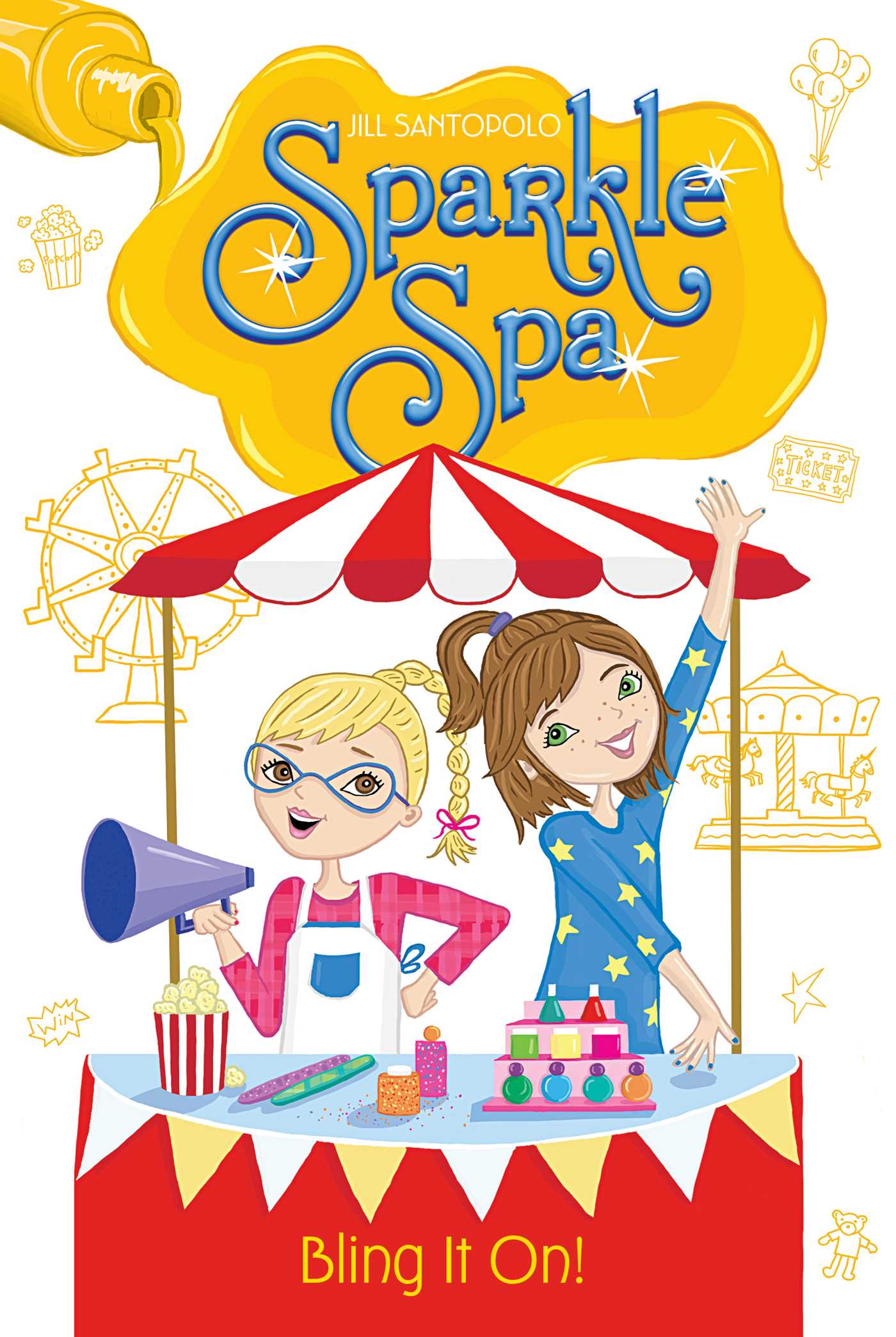 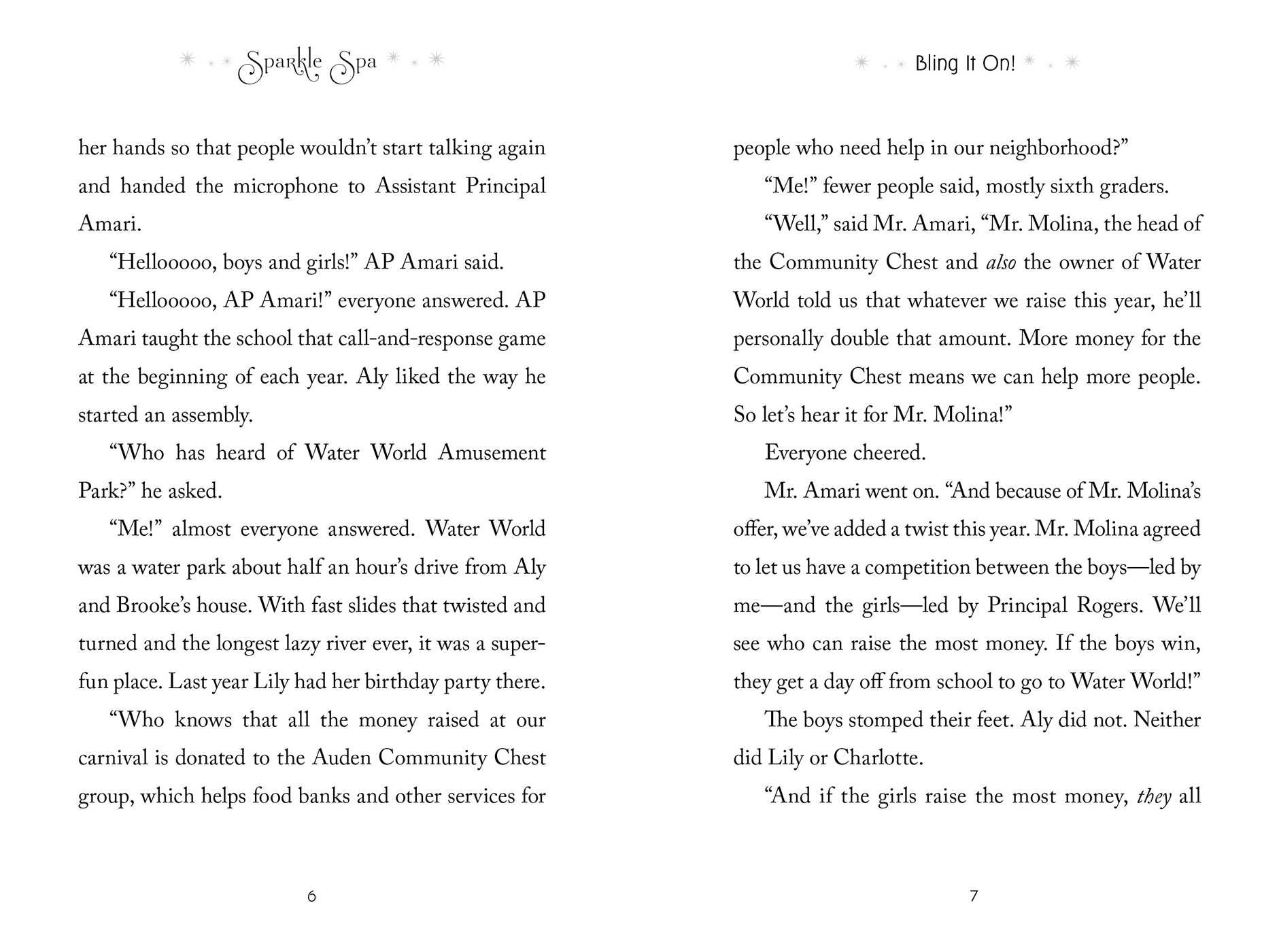 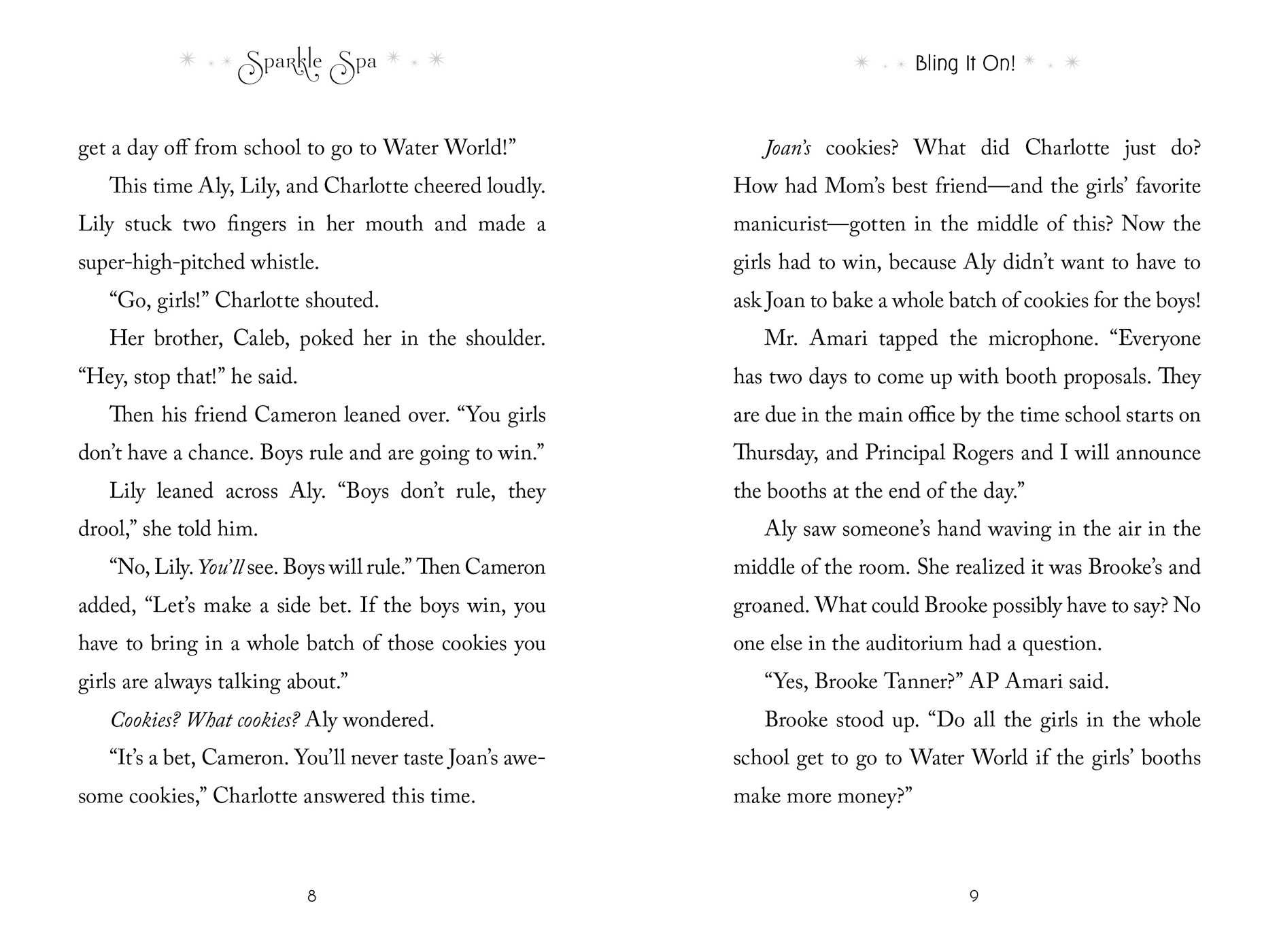 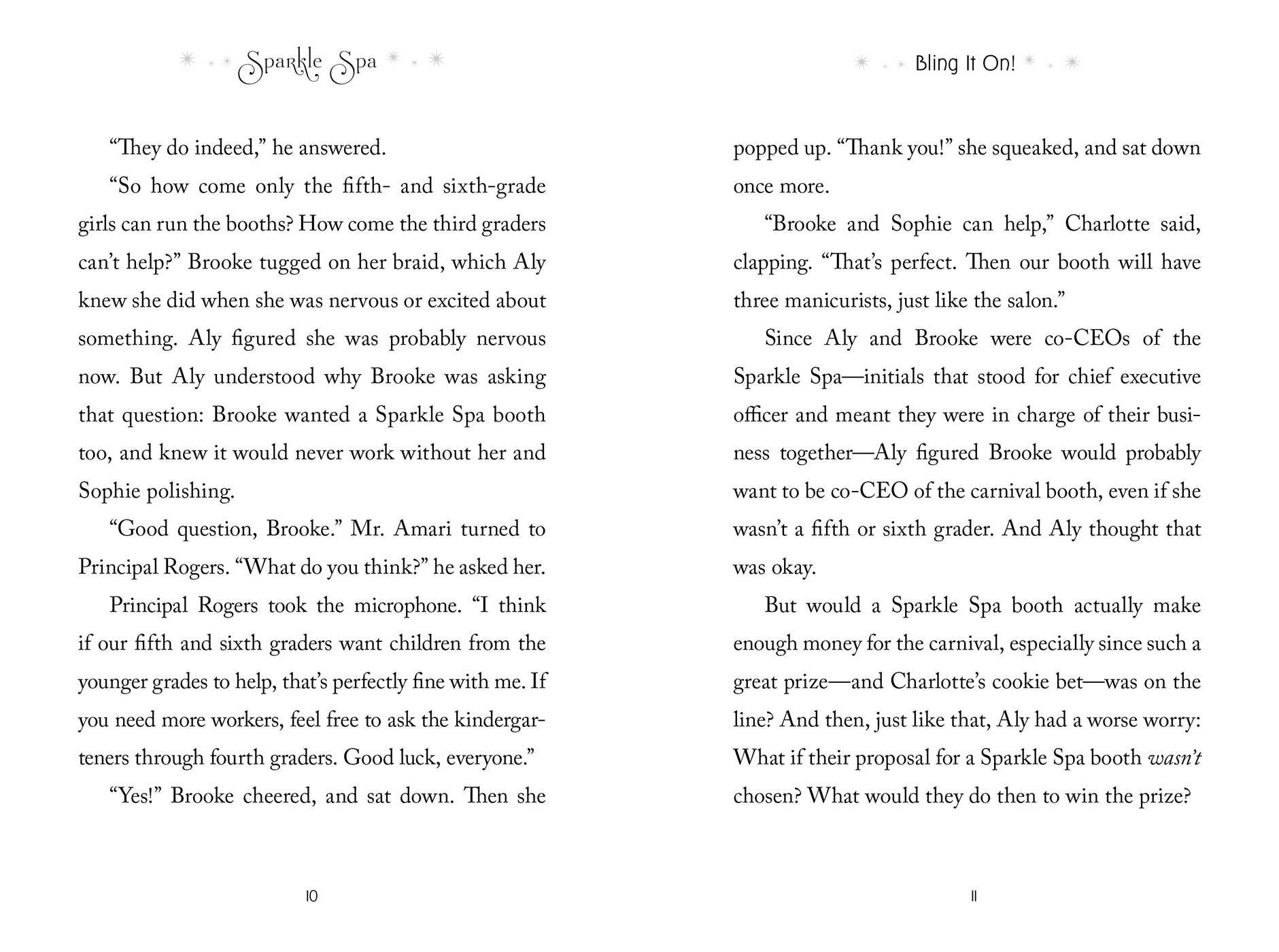 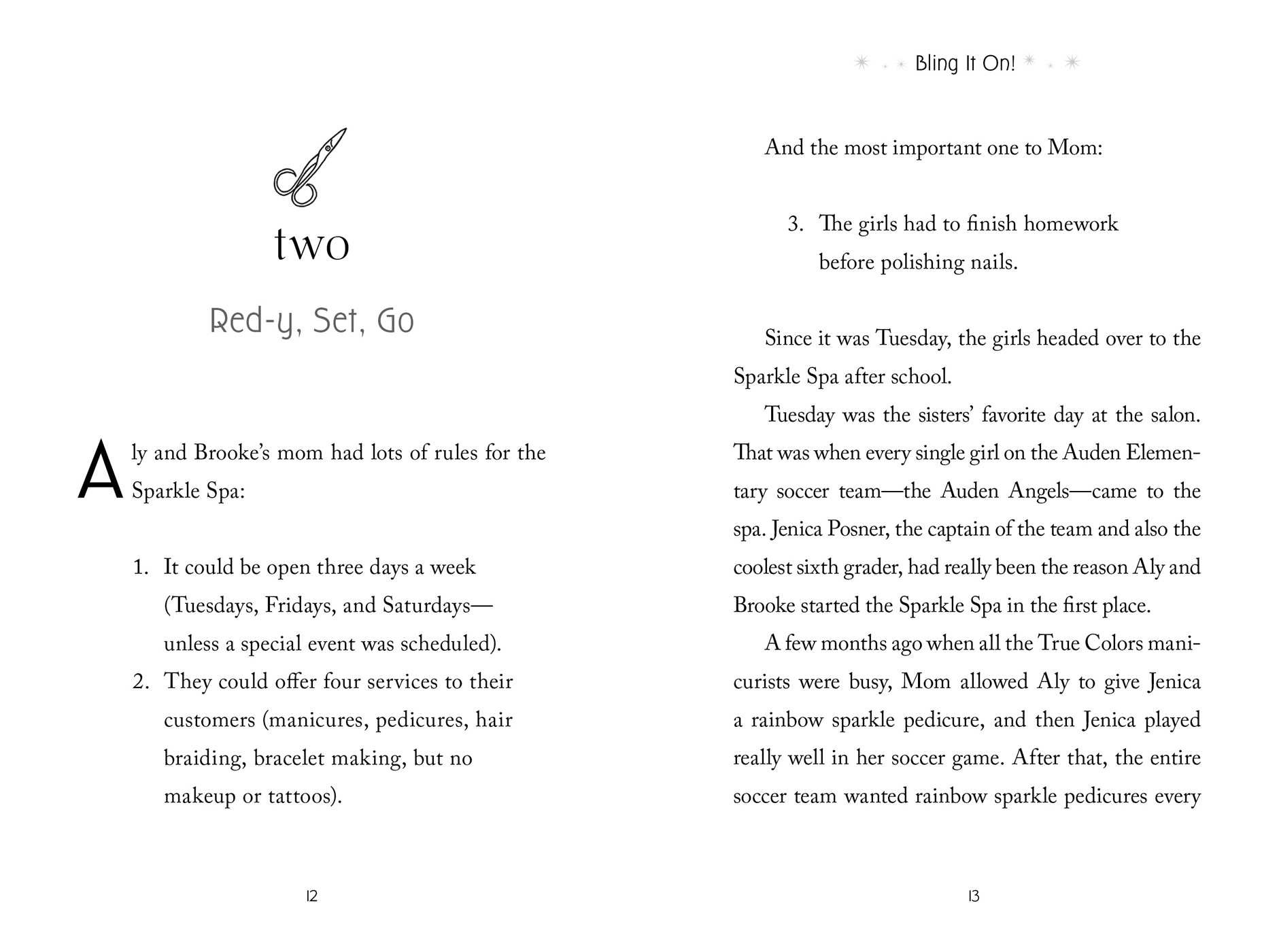 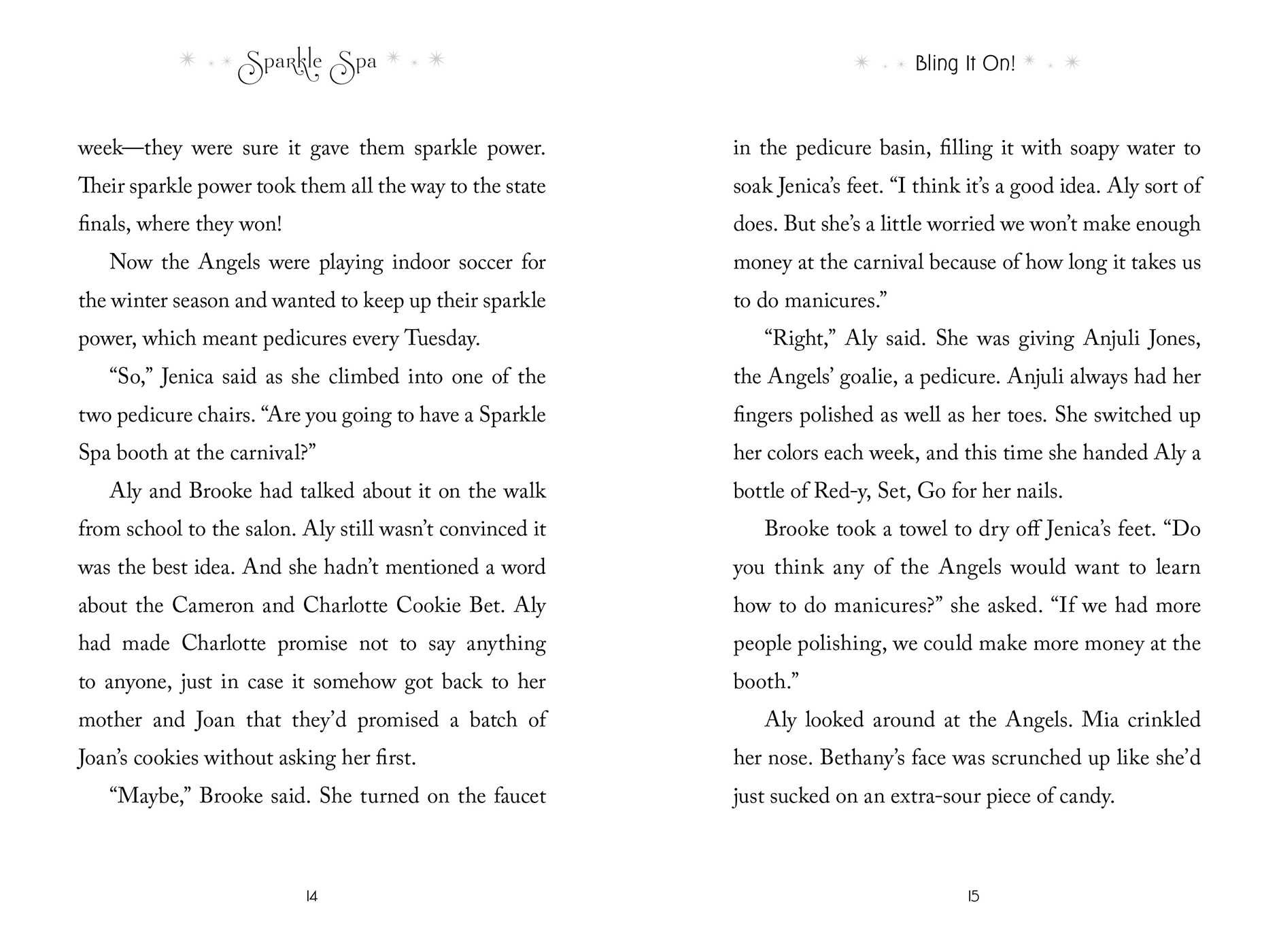 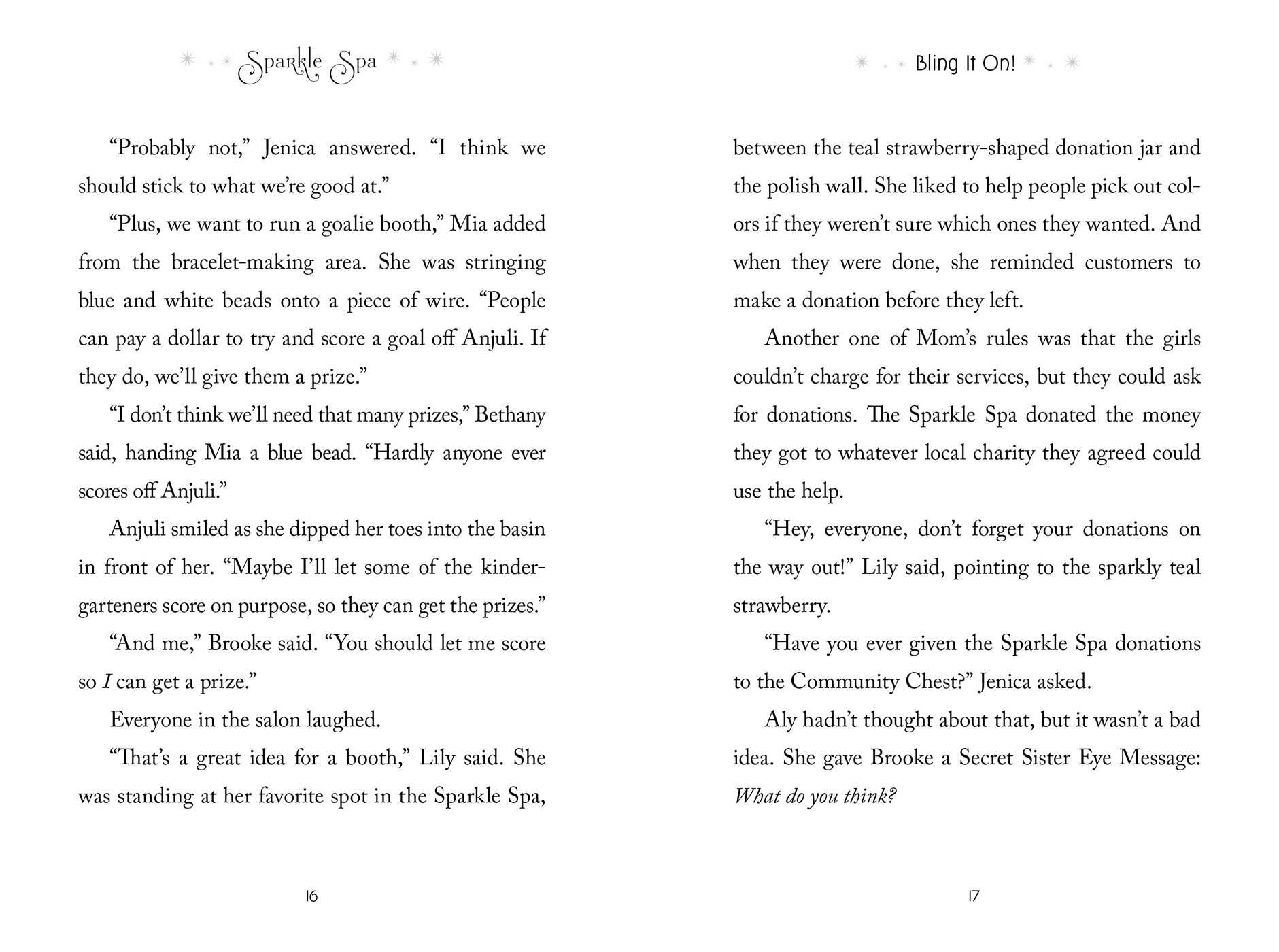 The Sparkle Spa nail salon relocates for Carnival Day—but can the Tanner sisters salvage the situation when a not-so-fun problem appears?

It’s Carnival Day at Auden Elementary School and Aly and Brooke are thrilled to set up a glittering Sparkle Spa booth for festive manicures. But what starts off all fun and games soon ends up in unpolished disaster! Can the girls find a way to repair the damage in time to enjoy the day?

one Blue Your Best
Aly Tanner sat in the back of the auditorium at Auden Elementary School in a chair the color of Blue Your Best nail polish. Looking at row after row of kids sitting in front of her reminded Aly of the ocean.

She was sitting between her best friends, Charlotte and Lily. Toward the middle of the room, Aly thought she could see the tip-top of her younger sister Brooke’s head, tilted toward Brooke’s best friend, Sophie Chu. Brooke was probably telling Sophie a story, because she was always telling stories, or asking questions, or wondering about things. Aly wondered if Brooke was the biggest chatterbox in the whole third grade. It was quite possible. She might even be the biggest chatterbox in all of Auden Elementary.

“May I have your attention! Boys and girls, your attention, please!” Principal Rogers was standing on the auditorium stage, with Assistant Principal Amari next to her. The whole room quieted down—Aly checked, and even Brooke was looking straight ahead.

All the kids cheered, including Aly. She loved the school carnival. There were a lot of booths. Last year Aly and Brooke had gotten their faces painted at the Face the Music booth and their hair spray-painted with purple stripes at Mane Event. And Aly had won two goldfish. She had carried them in their plastic bags around the carnival and named them Goldie and Lox. This year, Aly had no idea what she and her friends would do, but whatever it was, she knew it would be fun.

“Just like last year,” Principal Rogers added, “the fifth and sixth graders are invited to submit proposals for booths. Assistant Principal Amari and I will choose twenty to be at the carnival.”

Another cheer erupted from the room, but this time Aly didn’t join them. She’d forgotten that fifth and sixth graders were the ones who ran the booths. She tucked her hair behind her ears, but as usual it didn’t stay and flopped back in front of her eye. She’d have to decide between thinking up ideas with her friends and just going to the carnival like she did last year. Running a booth sounded like a lot of work, but it might be fun, too.

“Oh my gosh!” Charlotte whispered to Aly. “We could have a Sparkle Spa booth!”

Aly turned to look at her friend. “You think so?” she asked.

“It would be awesome,” Lily whispered from Aly’s other side. “We should totally do a Sparkle Spa booth.”

Even though they were still in elementary school, Aly and her sister, Brooke, were in charge of the Sparkle Spa, a sparkly nail salon for kids that was in the back room of their mom’s grown-up nail salon, True Colors. Charlotte and Lily, and Brooke’s friend Sophie, sometimes worked there too. And once in a while Charlotte’s twin brother, Caleb, helped out. Even though it was hard work running a salon, most of the time Aly thought it was pretty awesome, especially when kids at school told her how much they loved the way their nails looked at their dance recital or their aunt’s wedding or their grandparents’ anniversary dinner.

Aly figured that was how their mom felt, too, when she saw grown-ups with True Colors manicures and pedicures.

“Do you think anyone would come?” Aly asked. “I mean, it takes a long time to get your nails polished, compared to getting a flower painted on your face or throwing Ping-Pong balls into a cup of water to win a fish.”

Charlotte tapped the little Sparkle Spa schedule book that was sticking out of Aly’s jeans pocket. “You know how many customers come to the salon. Why wouldn’t they come to a booth at the carnival?”

Charlotte seemed certain about this, but Aly wasn’t so sure.

“Students,” Principal Rogers continued, “this year we have a special addition to the carnival.” She held up her hands so that people wouldn’t start talking again and handed the microphone to Assistant Principal Amari.

“Hellooooo, AP Amari!” everyone answered. AP Amari taught the school that call-and-response game at the beginning of each year. Aly liked the way he started an assembly.

“Who has heard of Water World Amusement Park?” he asked.

“Me!” almost everyone answered. Water World was a water park about half an hour’s drive from Aly and Brooke’s house. With fast slides that twisted and turned and the longest lazy river ever, it was a super-fun place. Last year Lily had her birthday party there.

“Who knows that all the money raised at our carnival is donated to the Auden Community Chest group, which helps food banks and other services for people who need help in our neighborhood?”

“Well,” said Mr. Amari, “Mr. Molina, the head of the Community Chest and also the owner of Water World told us that whatever we raise this year, he’ll personally double that amount. More money for the Community Chest means we can help more people. So let’s hear it for Mr. Molina!”

Mr. Amari went on. “And because of Mr. Molina’s offer, we’ve added a twist this year. Mr. Molina agreed to let us have a competition between the boys—led by me—and the girls—led by Principal Rogers. We’ll see who can raise the most money. If the boys win, they get a day off from school to go to Water World!”

The boys stomped their feet. Aly did not. Neither did Lily or Charlotte.

“And if the girls raise the most money, they all get a day off from school to go to Water World!”

This time Aly, Lily, and Charlotte cheered loudly. Lily stuck two fingers in her mouth and made a super-high-pitched whistle.

Her brother, Caleb, poked her in the shoulder. “Hey, stop that!” he said.

Then his friend Cameron leaned over. “You girls don’t have a chance. Boys rule and are going to win.”

Lily leaned across Aly. “Boys don’t rule, they drool,” she told him.

“No, Lily. You’ll see. Boys will rule.” Then Cameron added, “Let’s make a side bet. If the boys win, you have to bring in a whole batch of those cookies you girls are always talking about.”

Joan’s cookies? What did Charlotte just do? How had Mom’s best friend—and the girls’ favorite manicurist—gotten in the middle of this? Now the girls had to win, because Aly didn’t want to have to ask Joan to bake a whole batch of cookies for the boys!

Mr. Amari tapped the microphone. “Everyone has two days to come up with booth proposals. They are due in the main office by the time school starts on Thursday, and Principal Rogers and I will announce the booths at the end of the day.”

Aly saw someone’s hand waving in the air in the middle of the room. She realized it was Brooke’s and groaned. What could Brooke possibly have to say? No one else in the auditorium had a question.

Brooke stood up. “Do all the girls in the whole school get to go to Water World if the girls’ booths make more money?”

“They do indeed,” he answered.

“So how come only the fifth- and sixth-grade girls can run the booths? How come the third graders can’t help?” Brooke tugged on her braid, which Aly knew she did when she was nervous or excited about something. Aly figured she was probably nervous now. But Aly understood why Brooke was asking that question: Brooke wanted a Sparkle Spa booth too, and knew it would never work without her and Sophie polishing.

“Good question, Brooke.” Mr. Amari turned to Principal Rogers. “What do you think?” he asked her.

Principal Rogers took the microphone. “I think if our fifth and sixth graders want children from the younger grades to help, that’s perfectly fine with me. If you need more workers, feel free to ask the kindergarteners through fourth graders. Good luck, everyone.”

“Brooke and Sophie can help,” Charlotte said, clapping. “That’s perfect. Then our booth will have three manicurists, just like the salon.”

Since Aly and Brooke were co-CEOs of the Sparkle Spa—initials that stood for chief executive officer and meant they were in charge of their business together—Aly figured Brooke would probably want to be co-CEO of the carnival booth, even if she wasn’t a fifth or sixth grader. And Aly thought that was okay.

But would a Sparkle Spa booth actually make enough money for the carnival, especially since such a great prize—and Charlotte’s cookie bet—was on the line? And then, just like that, Aly had a worse worry: What if their proposal for a Sparkle Spa booth wasn’t chosen? What would they do then to win the prize?