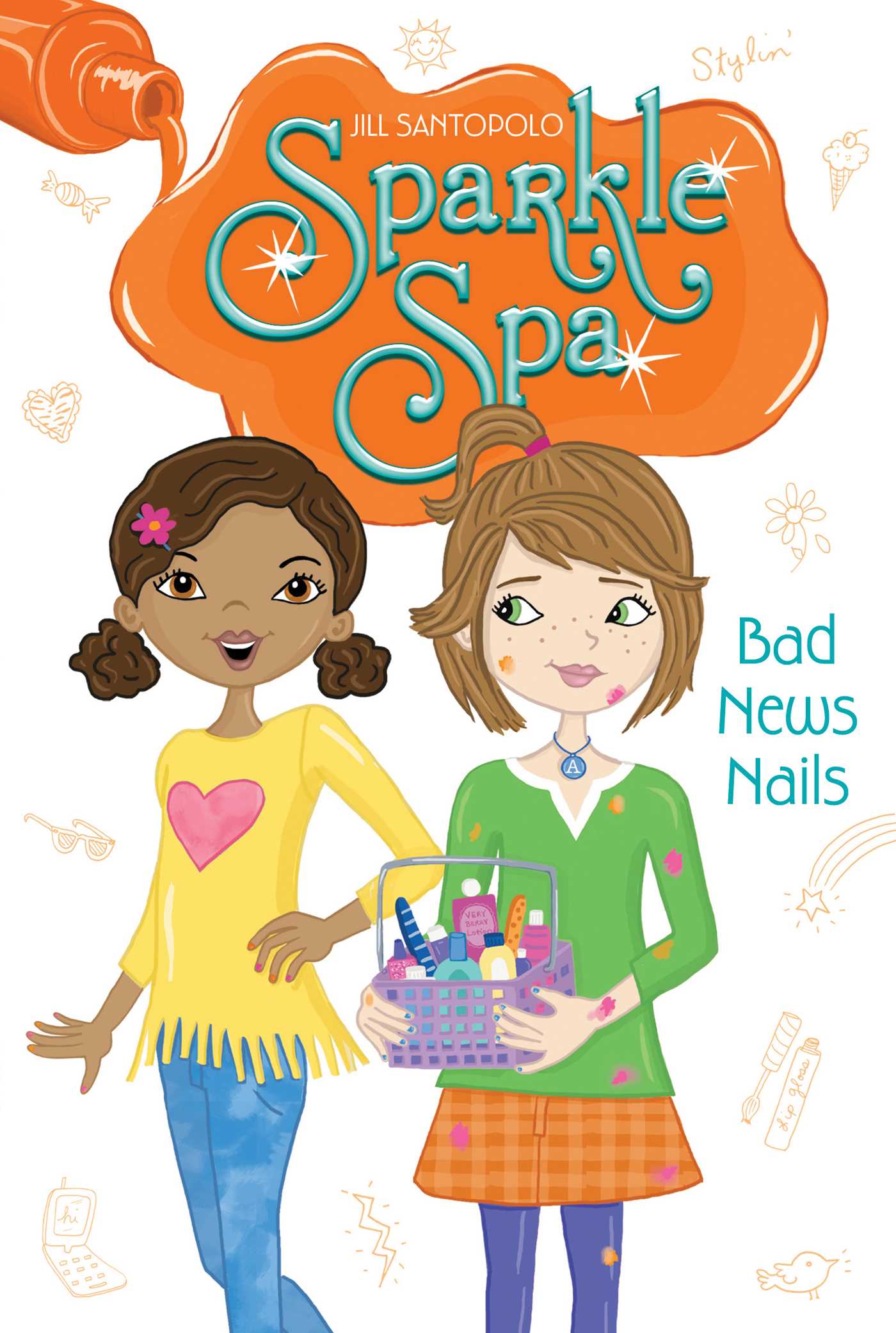 When a know-it-all nemesis joins the Sparkle Spa salon, the Tanner sisters have to get creative to regain control!

Trouble is coming to the Sparkle Spa, in the form of Aly Tanner’s worst nightmare: her arch rival and nemesis since kindergarten is joining the salon! Know-it-all Suzy Davis has plenty of ideas about how the nail salon should be run and isn’t shy about telling the sisters what to do and how to do it. How can Brooke and Aly get Suzy out of their hair—and their business?

one Sprinkle Sprinkle Little Star
Can you believe we get to go to a fiesta?” Aly Tanner’s younger sister, Brooke, asked as they stood in the Sparkle Spa staring at the nail polish display.

Aly kind of thought it did. But it didn’t sound as fancy as a gala—the Businesswomen Unite Fund-Raising Gala, to be exact. “It does,” Aly said. “But I don’t think people get to wear fancy dresses to a fiesta.”

Because Brooke and Aly had started their own business, the Sparkle Spa, in the back room of their mother’s nail salon, True Colors, Mom said the girls could come with her to the gala. She’d even let them buy new, sparkly dresses to wear. Joan, the girls’ favorite manicurist, who also helped Mom run True Colors, was coming too.

“Do you think we should start polishing?” Brooke asked.

Even though the Sparkle Spa was usually open on Friday afternoons, the girls had closed it today so that they could get ready for the gala. They were going to get dressed at the Sparkle Spa and do each other’s hair and nails.

Brooke nodded. “I just need to pick out my colors.”

Aly pulled their dresses out of the closet. Brooke’s was yellow and ruffly, with gold glitter all over the skirt. She had shiny gold sandals to wear too. Aly’s dress was orange, which wasn’t usually her favorite color, but she especially loved this dress. It was silky and came down to her ankles and had a gold glittery belt. Her sandals were the same as Brooke’s, but in a larger size, since she was a fifth grader and her sister was a third grader.

“How about Lemon Aid?” Aly asked, pulling the bottle of polish from the shelf and holding it up to Brooke’s dress.

Brooke shook her head. “Too much yellow.”

Brooke was a very good “color picker.” She helped a lot of the customers at the Sparkle Spa choose their nail polish and sometimes even helped the customers in True Colors. And she was usually the one to decide on the Sparkle Spa’s Color of the Week. This week it was a multicolored glittery shade called Sprinkle Sprinkle Little Star.

“I think pink looks nice with yellow,” Brooke said, picking up Under Watermelon. “Maybe this color on my toes. And the Color of the Week for my fingernails! I think I’m set now. How about you?”

Aly looked at her dress. “What color do you think goes best with orange?” she asked.

Brooke picked up Please Don’t Teal. “This one,” she said. “And you should use Sprinkle Sprinkle Little Star for your nails too. We can match!”

Aly smiled. “Okay,” she said. “Take off your flip-flops. You can go first.”

Brooke climbed into the blue-green pedicure chair that was almost the same color as Please Don’t Teal. Aly turned the water on to fill up the basin.

“Let’s make a list,” she said, “of everything we’re excited for tonight.”

Aly loved making lists. They helped her organize her thoughts. Brooke’s brain seemed like it was hardly ever organized, but she was actually pretty good at helping Aly make lists.

“One,” Brooke said, swinging her legs back and forth, “we get to wear the fanciest dresses we’ve ever had.”

“Two,” Aly added as she squirted soap into the water, “we get to be counted as official businesswomen who started their own company.”

Brooke looked at Aly. “Do you think we should bring our business cards?”

A little more than a month ago, Brooke had broken her arm. Because of that, Aly had needed help from some of their friends to run the Sparkle Spa, which led to the girls deciding to create official job titles and business cards for themselves and their friends who had helped.

She and Brooke were now co–chief executive officers. As CEOs, they were in charge of pretty much everything in the spa: the Color of the Week, special occasion manicures, the jewelry-making station, and customer service. Most important was the fund-raising jar, which held the money their customers donated for manicures and pedicures. When the jar filled up, Aly and Brooke would pick a worthy charity or cause and donate the money there.

“It’s a good thing Mom bought us little purses to match our shoes,” Brooke said. “We can keep the cards in there.”

Mom really did think of everything. Aly wanted to be just like her when she grew up—smart and organized and successful.

“Three,” Aly said, “I’m excited for the auction!” As part of the gala, the attendees could “sell” things to help raise money for Businesswomen Unite, and Mom had offered to auction an internship at True Colors to anyone interested in learning how to run a small business. Aly thought that was really nice of her mom, teaching someone else how to be a business owner. She felt pretty lucky that Mom had taught her and Brooke for free.

“I hope the True Colors intern is as cool as Joan,” Brooke said.

Aly had filed Brooke’s toenails and now was painting them with a layer of clear polish so Under Watermelon would stick better.

Just as Aly painted Brooke’s big toe pink, Jenica Posner poked her head into the spa. Jenica was a sixth grader at their school, captain of the Auden Elementary girls’ soccer team, and the Sparkle Spa’s first—and best—customer.

“Oh, good!” she said. “You’re here! Charlotte said the Sparkle Spa was closed today, so I didn’t know if you’d be around.”

“Is your nana getting her nails done at True Colors?” Brooke asked from the pedicure chair.

Jenica nodded. “Anyway, I came to ask what you guys thought about having a spa party for the soccer team. We only have one more game this season—the state finals—and since it’s such a big deal that we got that far, I thought we should celebrate.”

“We could totally do that,” Aly said. “What did you have in mind to make it different from your weekly pedicures?”

Jenica shrugged. “I don’t know. But I’m sure you guys will think of something cool. You did invent the rainbow sparkle pedicure after all.”

Brooke smiled—she was actually the one who had invented the pedicure, and for some reason, all the players on the team believed it had given them extra luck for their games this season. They’d been coming in every Tuesday afternoon to get their rainbow sparkle power refreshed ever since the salon opened. “We’ll come up with something fantabulous,” she told Jenica.

“When do you want to have the party?” Aly asked. Part of being in charge of their business meant organizing all of the practical things, like dates and times of special events.

“Well, the state finals are a week from tomorrow,” Jenica said, leaning against the door frame, “so how about the day after? Next Sunday?”

Aly got up and looked at the wall calendar Charlotte had made. She had been named COO—chief operating officer—of the Sparkle Spa to make everything run smoothly on the days they were open, but she had to check her plans with Aly and Brooke first. There was nothing scheduled on the calendar yet for next Sunday.

Jenica tightened her ponytail. “How about eleven to one? And we’ll order some pizza too.”

“Sounds great to me,” Aly said. Then she took a sparkle pen and wrote in Soccer Spa Party from the ten o’clock to two o’clock slots so they would have time for setup and cleanup too.

“Hey.” Jenica looked around. “How come you’re closed today if you guys are here?”

“We’re going to a fiesta tonight!” Brooke answered. “And we have to make ourselves fancy!”

“A gala,” Aly told Jenica. “She means a gala. It’s for women who run businesses.”

“And we get to wear sparkly dresses and stay out past our regular bedtimes because that’s what happens when you run a business,” Brooke said, pushing her glasses up on her nose.

Aly smiled. If anyone had told her at the beginning of the school year that the coolest sixth grader at Auden Elementary would think she was doing something awesome right now, she never would have believed it. But because of the Sparkle Spa, tons of people at school she’d never talked to before came up to her all the time, telling her how great her business was and asking if they could come by. Everyone, that is, except for Suzy Davis. Aly shook her head to get Suzy Davis out of her brain.

“Thanks,” Aly said to Jenica.

“Yeah, thanks,” Brooke said. “Aly, are you going to finish my pedicure? My big toe is the only one polished, and he feels lonely.”

Jenica and Aly laughed. “On my way,” Aly said.

“See you on Tuesday for our rainbow sparkles,” Jenica told the girls. “And have fun tonight.”

She left the Sparkle Spa, and Aly got back to work on Brooke’s toes.

“Do you think we will have fun tonight?” Brooke asked.

Aly thought about it. “With fancy dresses and sparkly nails and staying out late, I think it might be our best night ever.”

Brooke smiled. “Me too!”