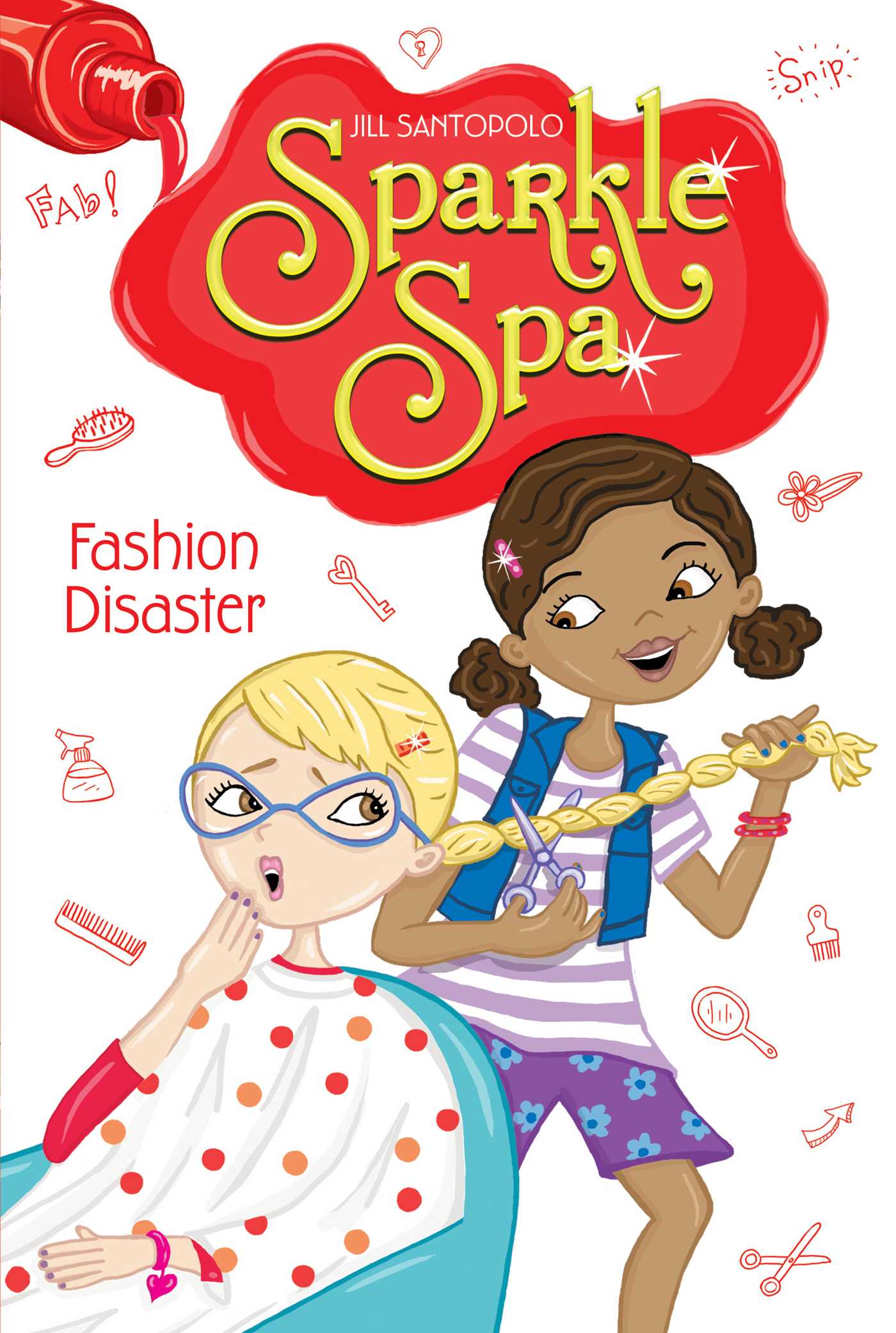 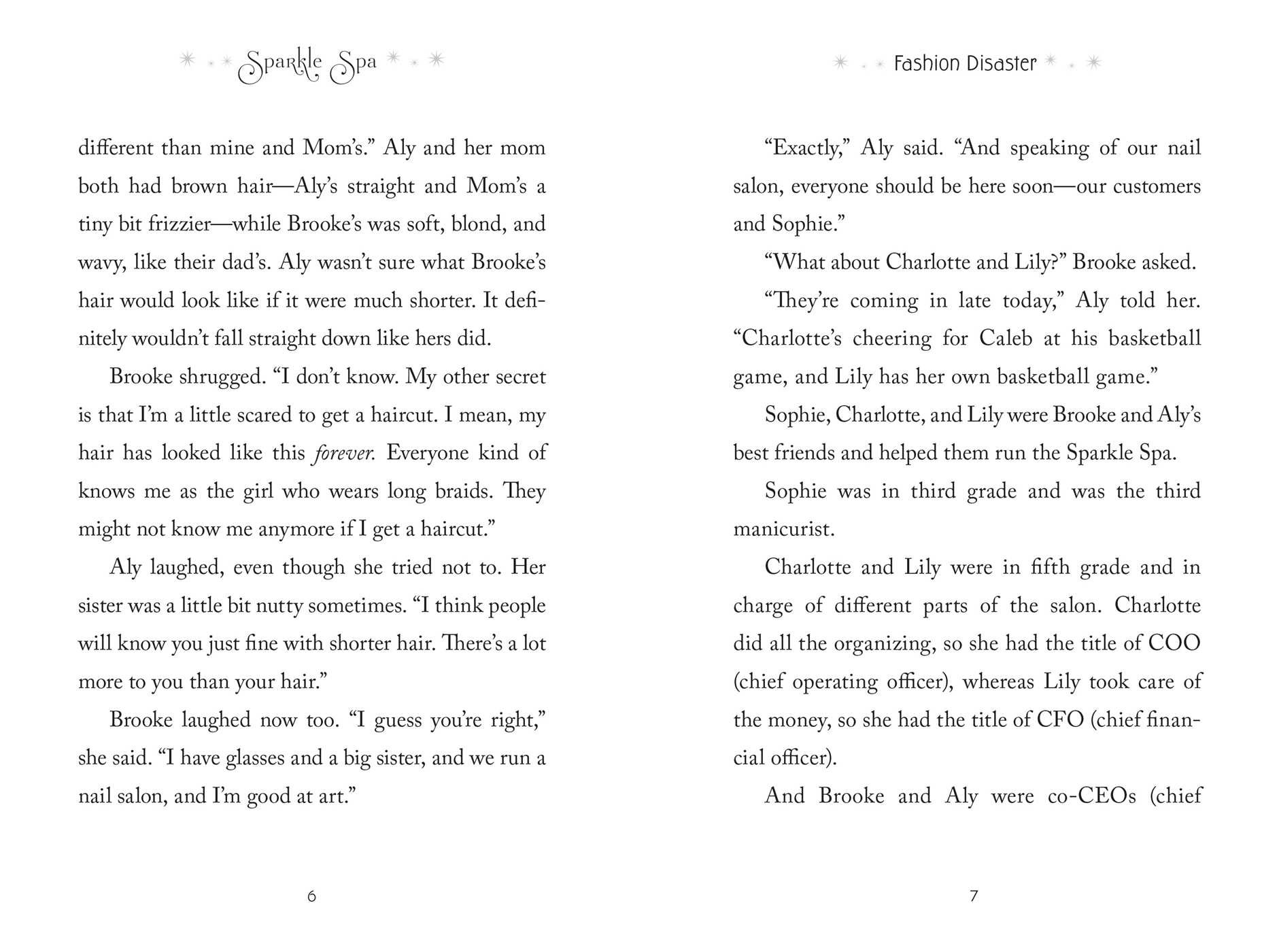 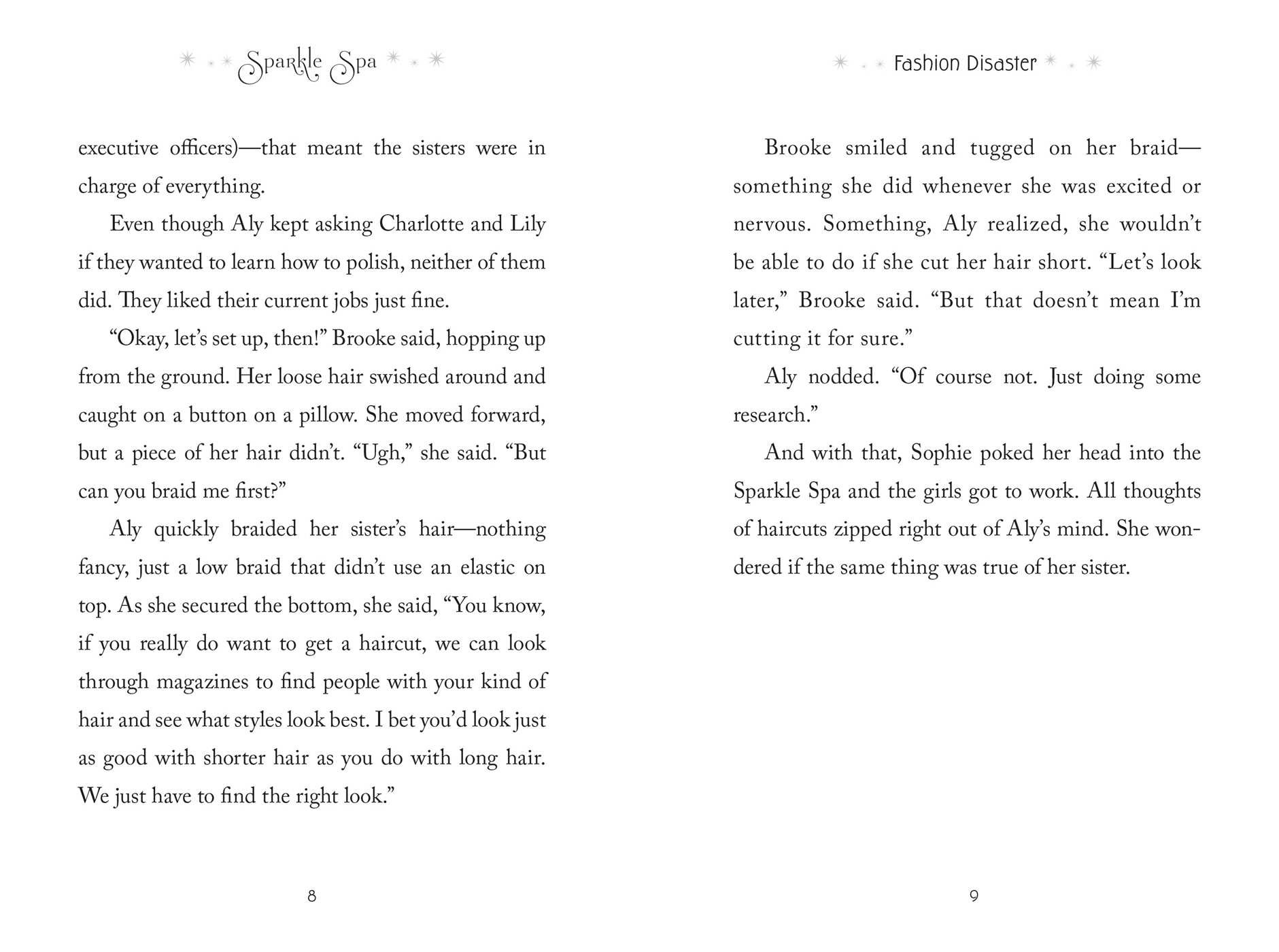 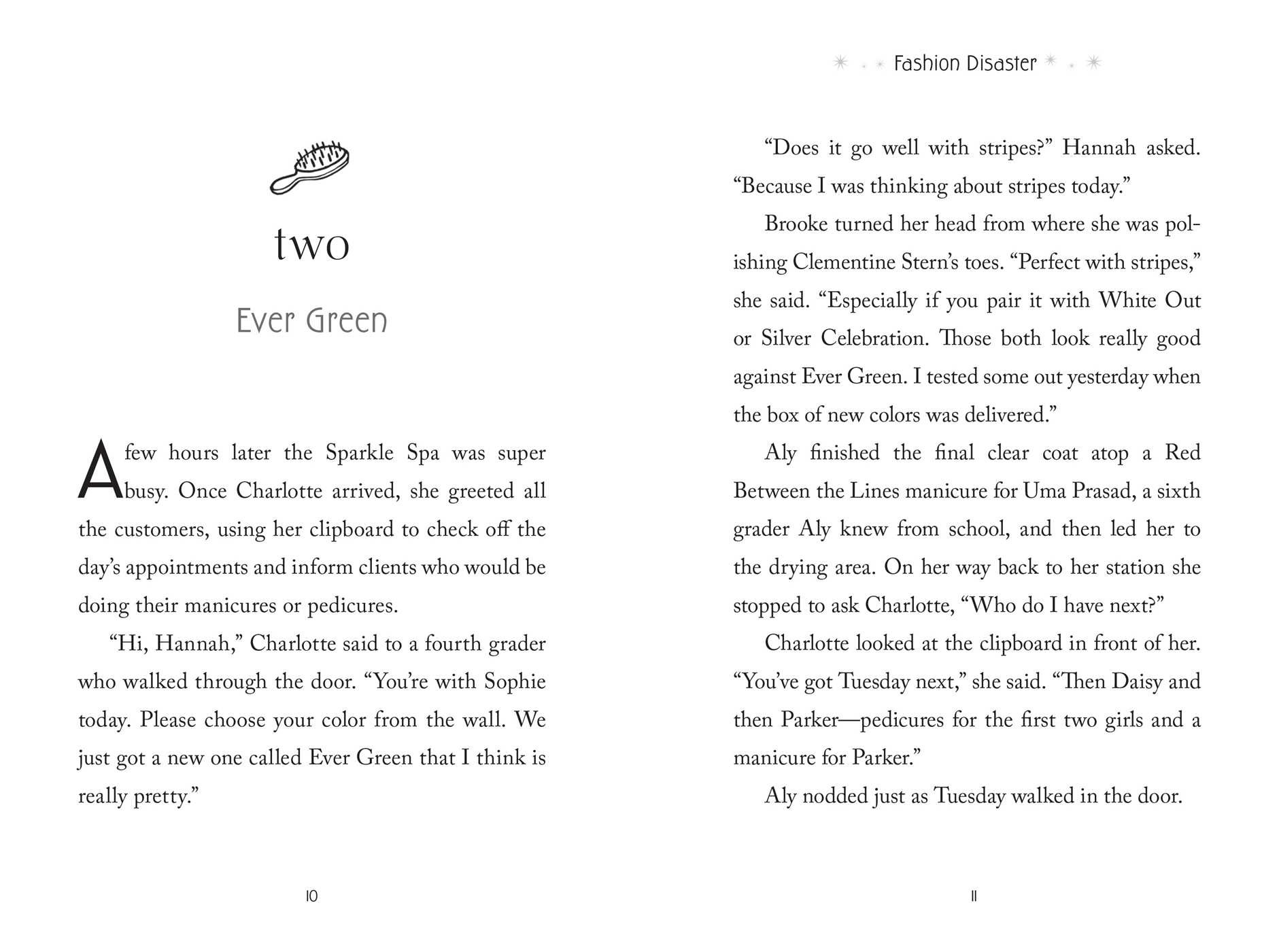 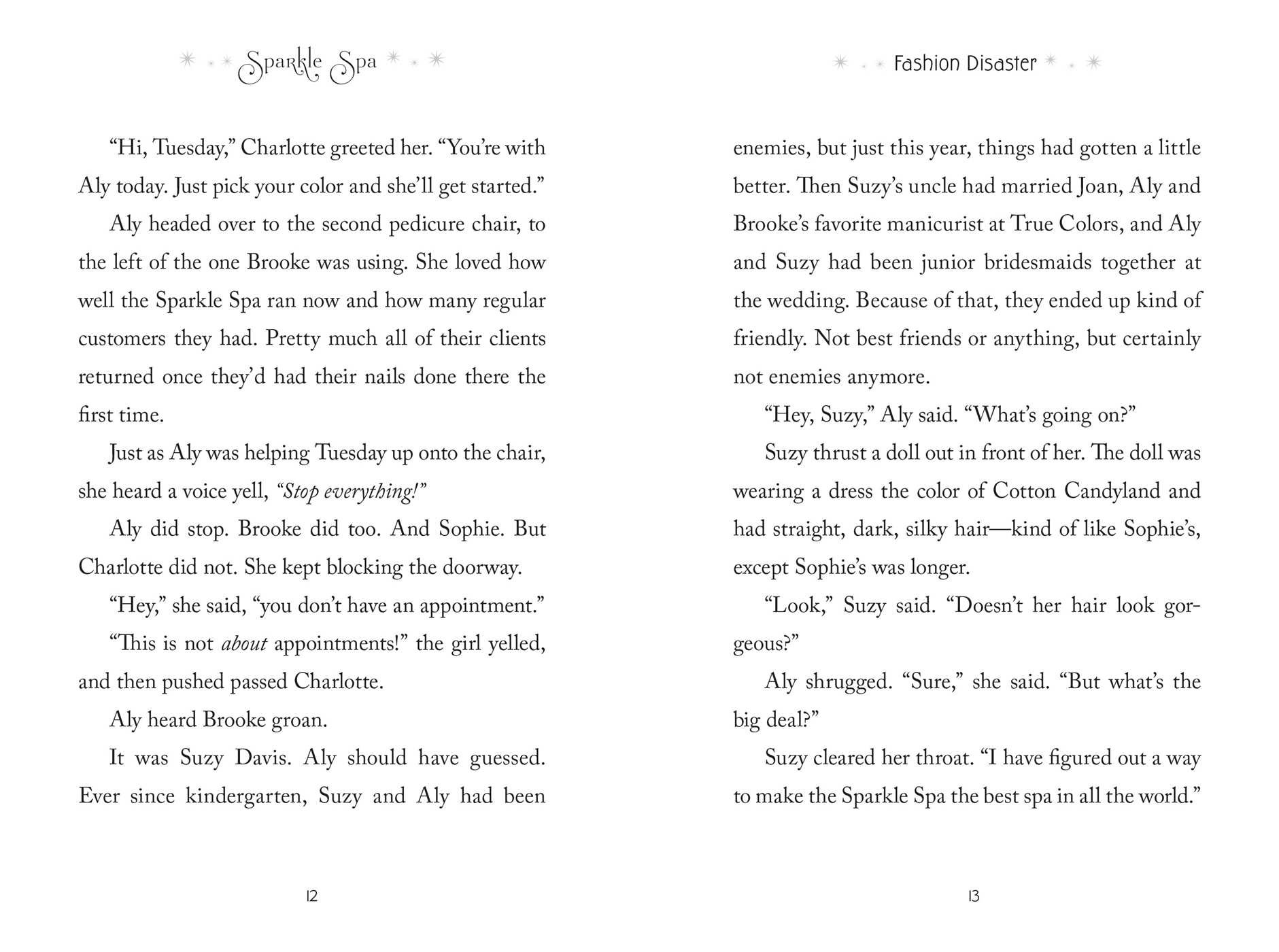 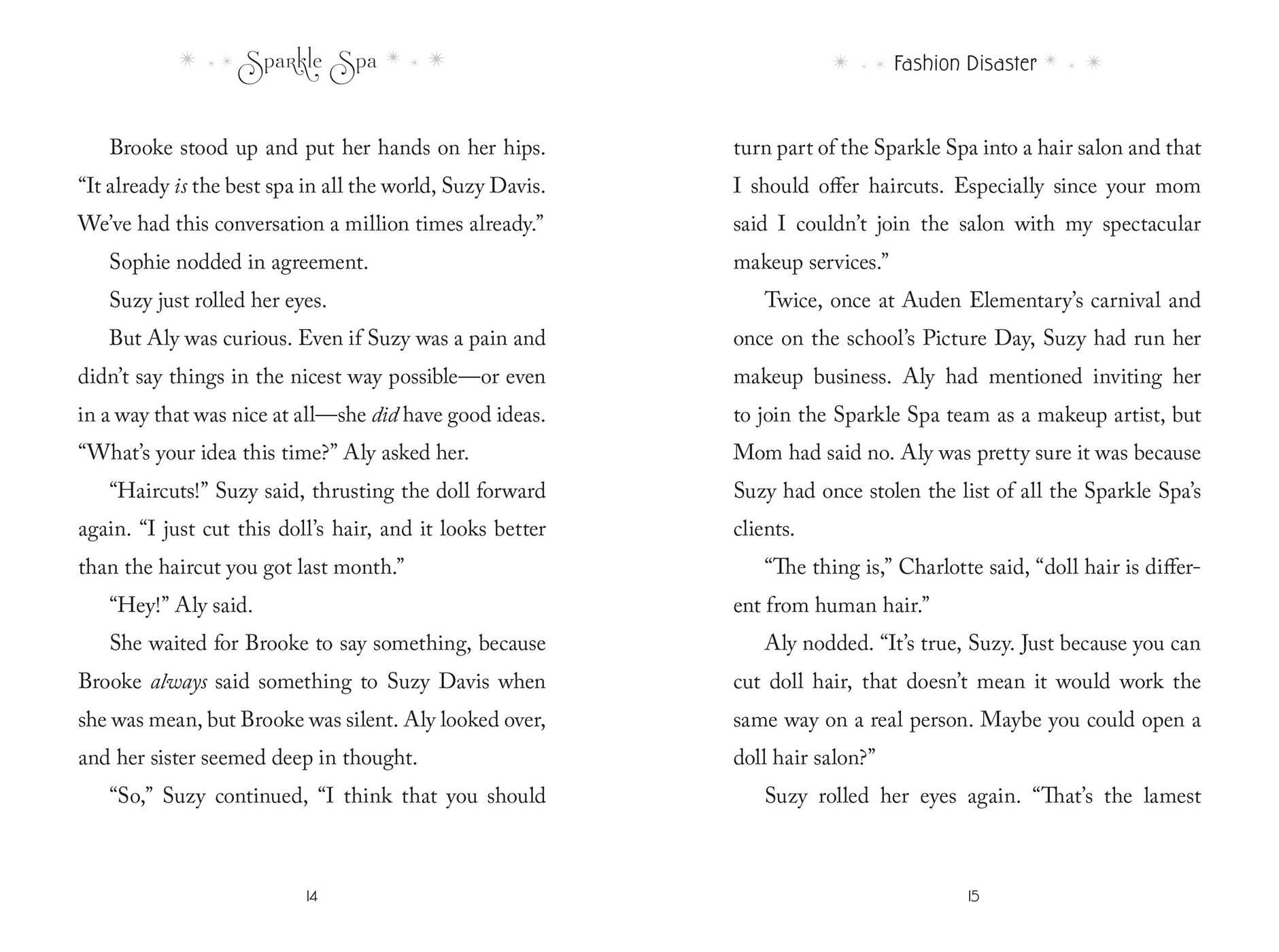 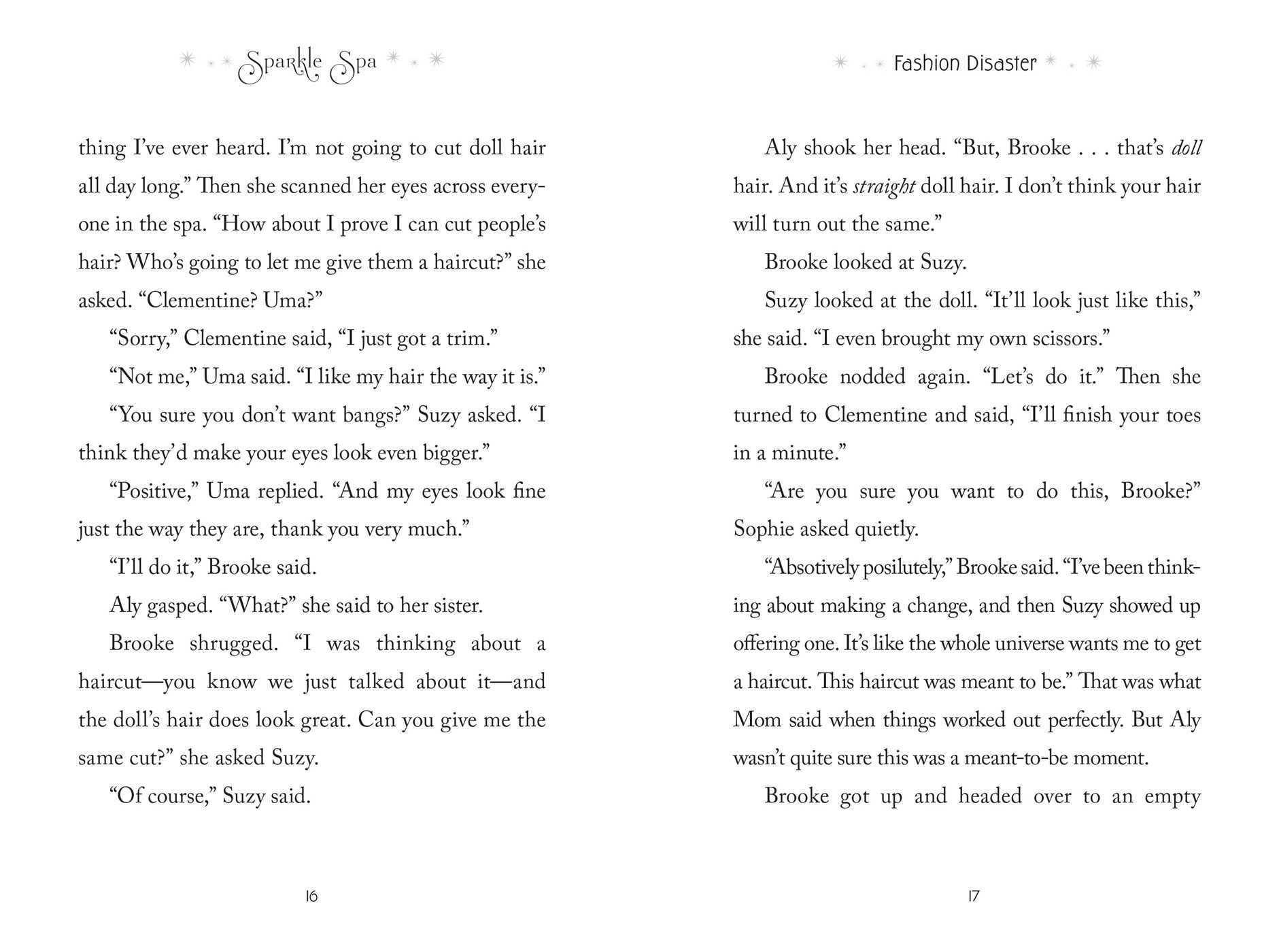 The Sparkle Spa crew kick it into high gear to help Brooke out of a hairy situation in the ninth sparkly story in this shimmering series about two sisters who open their own mini-nail salon.

Talk about a bad hair day! When Brooke gets a disastrous haircut—compliments of thorn-in-everyone’s-side Suzy Davis—she vows never to show her face in public again! Will the Sparkle Spa crew convince her otherwise?

one Purrfectly Purple
Aly and Brooke Tanner had gotten to the Sparkle Spa extra early on Sunday morning.

Their dog, Sparkly, was in his favorite corner of the spa, busy chewing on a piece of rawhide that was spiraled like a staircase.

And Brooke was busy experimenting. She took out the elastic from the bottom of her braid, unbraided her hair, then took out the top elastic, letting her hair fall loose down her back.

“What do you think?” she asked Aly. Since Aly was in fifth grade and Brooke was only in third, Brooke often asked her older sister for advice. But sometimes, even though Brooke was younger, Aly asked her for advice. So it was pretty much even between them.

“Wow,” Aly said. “I think your hair might have grown more overnight!”

Brooke’s hair wasn’t just long. It was really long. It was the kind of long where the bottom ends of it brushed the top of her shorts. She pulled some strands over her shoulders to the front side of her body.

“I think it goes past my belly button,” Brooke said, lifting up her T-shirt to see where her hair stopped on her stomach. “Yep, definitely,” she confirmed, pulling her shirt back down.

Aly inspected her sister. She braided Brooke’s hair all the time, so Aly knew it was long, but because Brooke never, ever wore it down, Aly hadn’t thought about just how long it had gotten. Brooke always had it in either one braid or two: sometimes a French braid, sometimes Dutch, sometimes a fishtail, or sometimes a regular braid. But it was always tied back somehow.

“I think you have mermaid hair,” Aly told her sister.

Brooke’s eyes lit up behind her blue-framed glasses. “You think so?” she said.

Aly nodded. “I do. But it’s still kind of clumped into three pieces. Do you want me to brush it?”

“Do we have a brush here?” Brooke asked.

“I think there’s one in the desk,” Aly answered.

Brooke walked over to the other side of the Sparkle Spa—which was really just the back room of their mom’s nail salon, True Colors—and found a brush the color of Purrfectly Purple nail polish in the desk drawer.

The girls had done their best to decorate the Sparkle Spa with colorful pillows and beautiful paintings and a huge display of nail polish on multiple shelves—in addition to the two teal pedicure chairs and two blue manicure stations that were already there—but some things had to stay, like their mom’s desk and the mini-fridge right next to it.

Brooke sat down on one of the pillows in the nail-drying area, and Aly sat behind her, brushing and brushing her sister’s hair until it looked more mermaidy than ever.

“When was the last time your hair was cut, Brookester? At a real salon?” Aly asked. Aly had gotten a haircut about six weeks ago. She liked keeping her hair chin-length like her mom’s.

Brooke thought for a few moments. “Kindergarten?” she said. “Or maybe preschool?”

Aly quickly counted in her head. “Brooke!” she said. “That’s, like, three or four years ago!”

“Actually, I think I got a haircut right before kindergarten started. I remember the pieces of hair made my new shirt itchy—the one with glitter hearts—and I was worried I wouldn’t be able to wear it for the first day of school. But then Mom washed it, and it was fine. Remember that shirt? I wish it still fit.”

“I remember,” Aly said. “I had one just like it with glitter polka dots, and I wore it for the first day of second grade. So it’s really been three and a half years since your hair was cut.”

Brooke turned around to face Aly. “Want to know a secret?”

Aly nodded, but she was pretty sure her sister would have told her even if she hadn’t.

“I’ve been thinking about getting a major haircut,” Brooke said. “A super-short one, like yours and Mom’s.” Brooke took a bunch of her hair in her fist and looked at the ends.

“Really?” Aly asked. “But your hair’s a little different than mine and Mom’s.” Aly and her mom both had brown hair—Aly’s straight and Mom’s a tiny bit frizzier—while Brooke’s was soft, blond, and wavy, like their dad’s. Aly wasn’t sure what Brooke’s hair would look like if it were much shorter. It definitely wouldn’t fall straight down like hers did.

Brooke shrugged. “I don’t know. My other secret is that I’m a little scared to get a haircut. I mean, my hair has looked like this forever. Everyone kind of knows me as the girl who wears long braids. They might not know me anymore if I get a haircut.”

Aly laughed, even though she tried not to. Her sister was a little bit nutty sometimes. “I think people will know you just fine with shorter hair. There’s a lot more to you than your hair.”

Brooke laughed now too. “I guess you’re right,” she said. “I have glasses and a big sister, and we run a nail salon, and I’m good at art.”

“Exactly,” Aly said. “And speaking of our nail salon, everyone should be here soon—our customers and Sophie.”

“What about Charlotte and Lily?” Brooke asked.

Sophie, Charlotte, and Lily were Brooke and Aly’s best friends and helped them run the Sparkle Spa.

Sophie was in third grade and was the third manicurist.

And Brooke and Aly were co-CEOs (chief executive officers)—that meant the sisters were in charge of everything.

Even though Aly kept asking Charlotte and Lily if they wanted to learn how to polish, neither of them did. They liked their current jobs just fine.

“Okay, let’s set up, then!” Brooke said, hopping up from the ground. Her loose hair swished around and caught on a button on a pillow. She moved forward, but a piece of her hair didn’t. “Ugh,” she said. “But can you braid me first?”

Aly quickly braided her sister’s hair—nothing fancy, just a low braid that didn’t use an elastic on top. As she secured the bottom, she said, “You know, if you really do want to get a haircut, we can look through magazines to find people with your kind of hair and see what styles look best. I bet you’d look just as good with shorter hair as you do with long hair. We just have to find the right look.”

Brooke smiled and tugged on her braid—something she did whenever she was excited or nervous. Something, Aly realized, she wouldn’t be able to do if she cut her hair short. “Let’s look later,” Brooke said. “But that doesn’t mean I’m cutting it for sure.”

Aly nodded. “Of course not. Just doing some research.”

And with that, Sophie poked her head into the Sparkle Spa and the girls got to work. All thoughts of haircuts zipped right out of Aly’s mind. She wondered if the same thing was true of her sister.