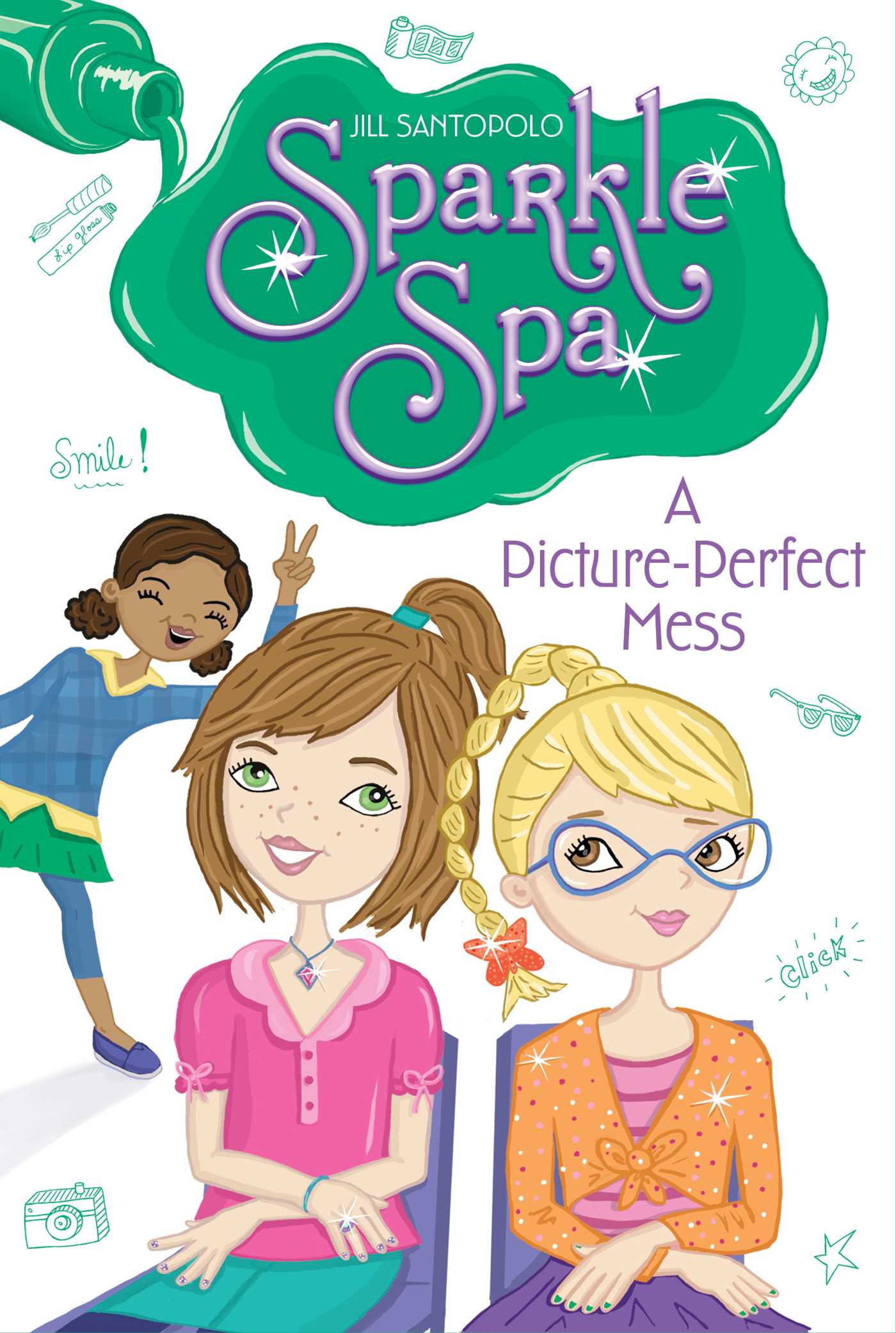 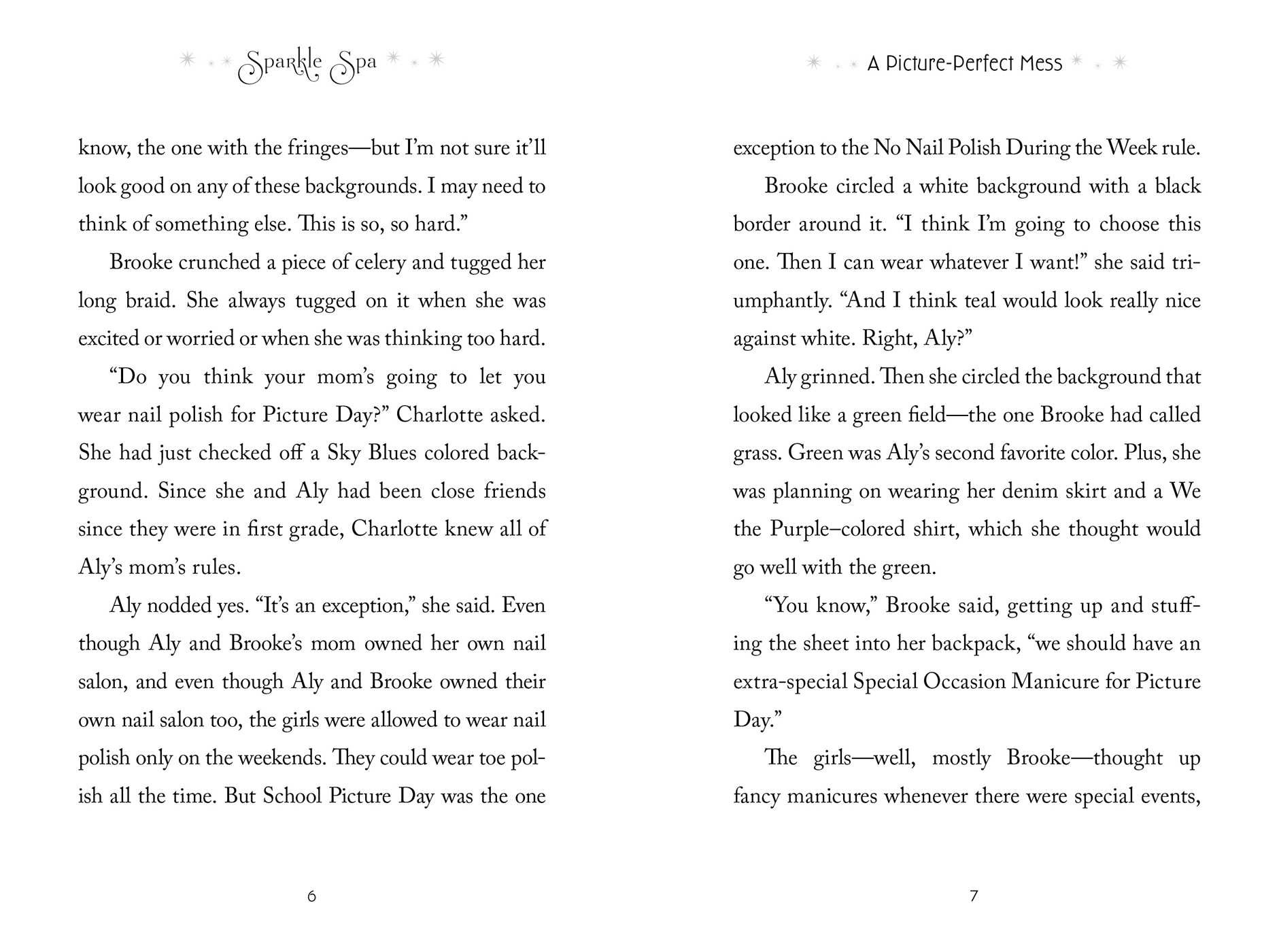 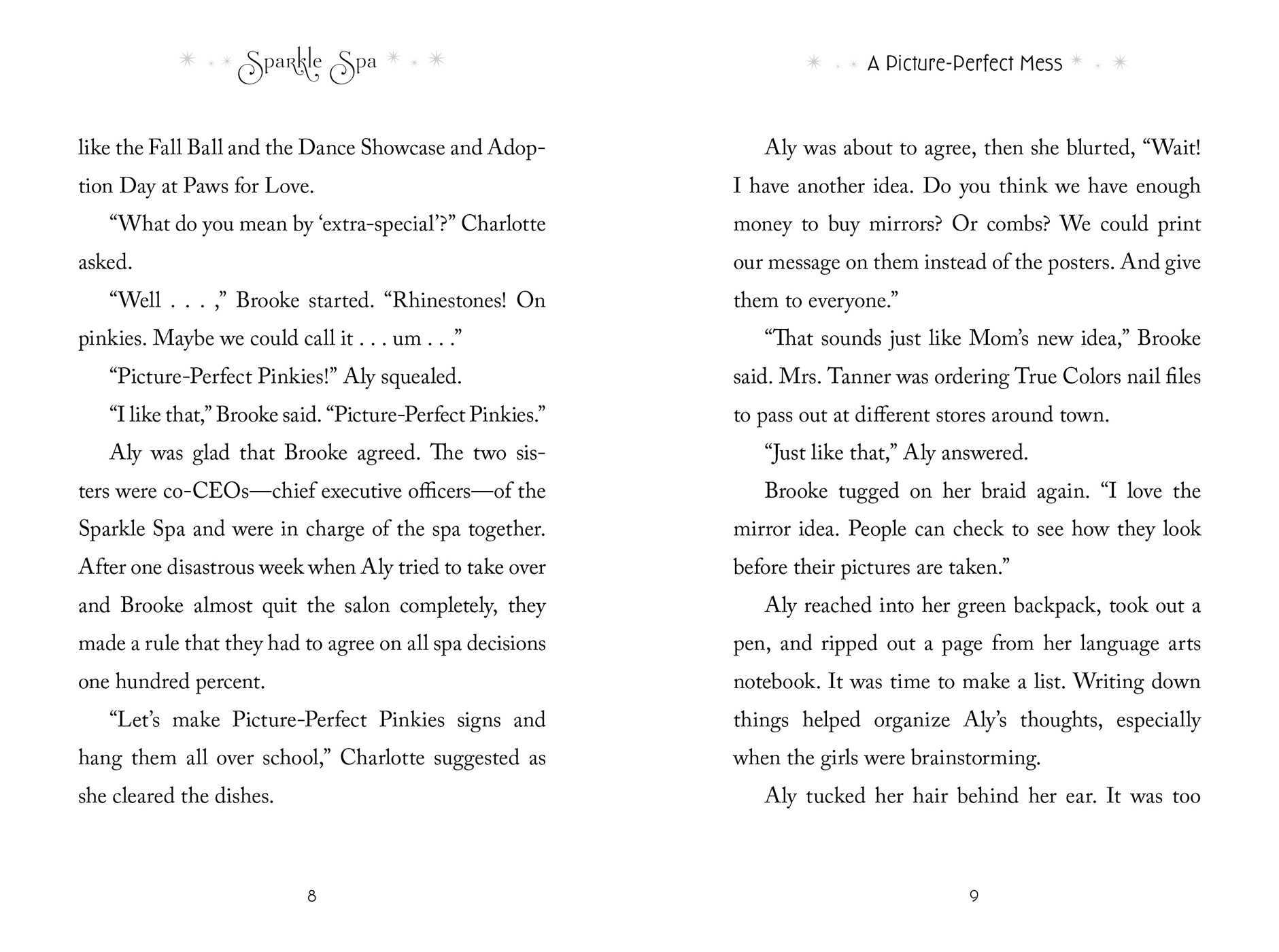 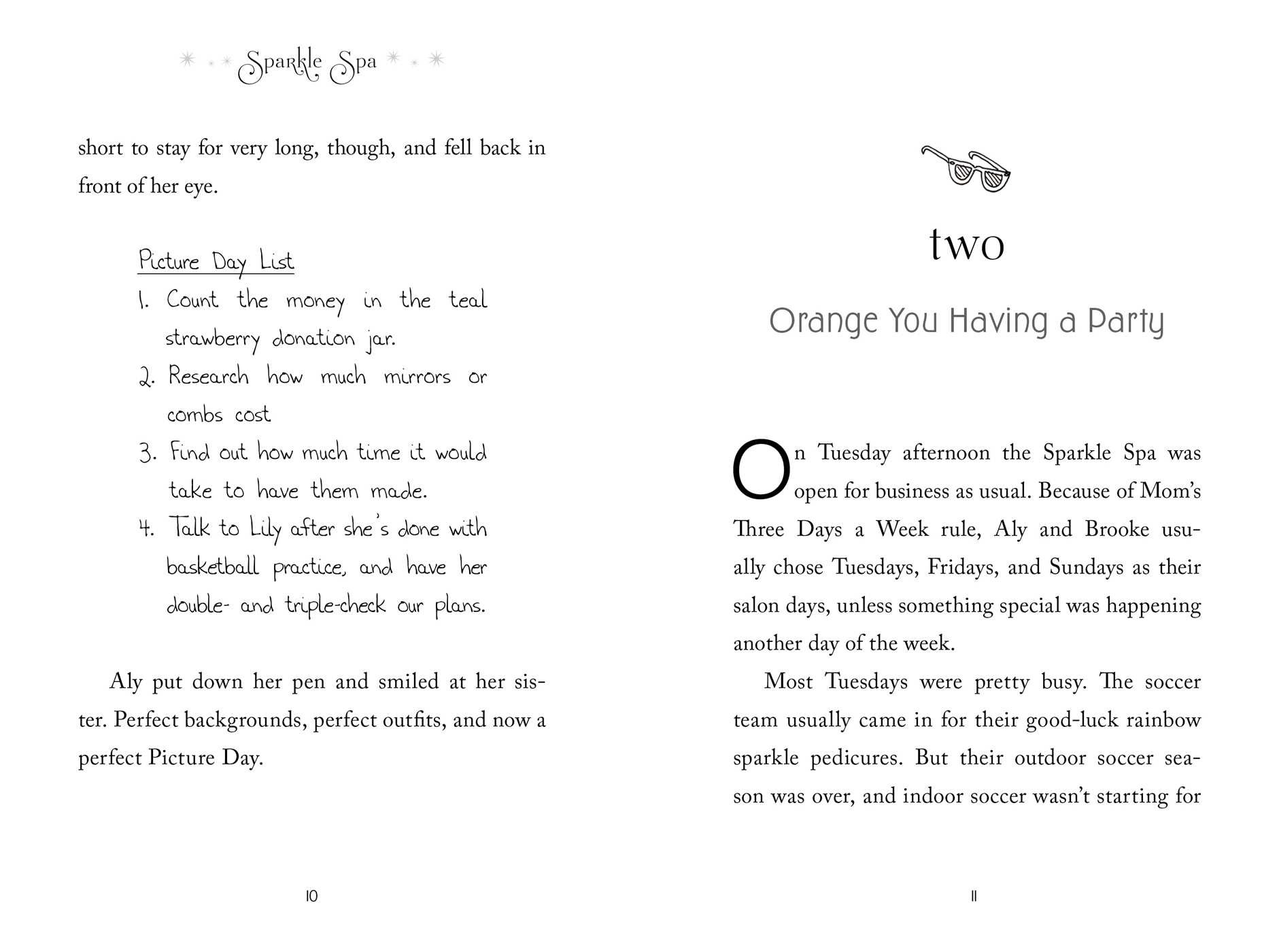 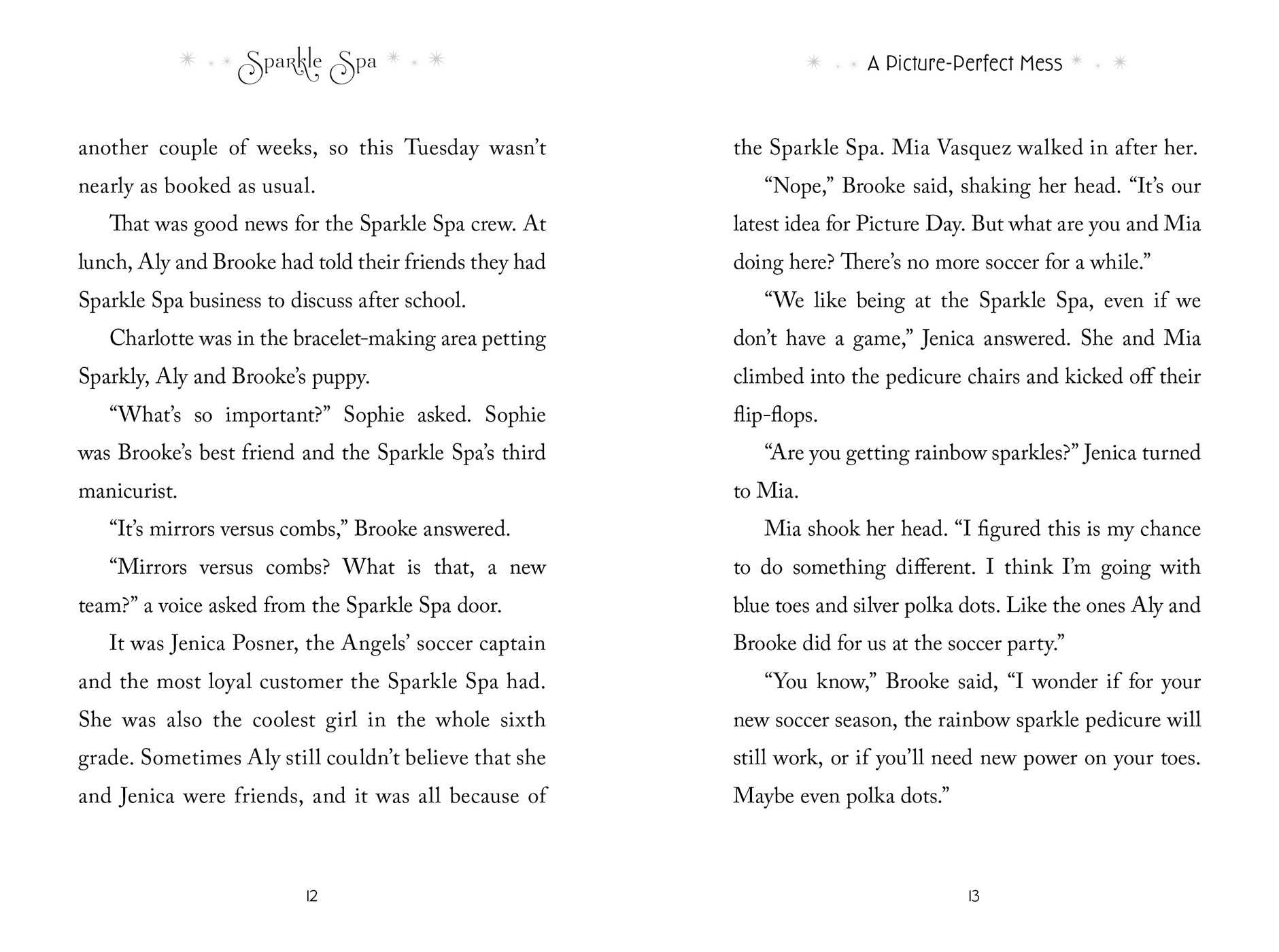 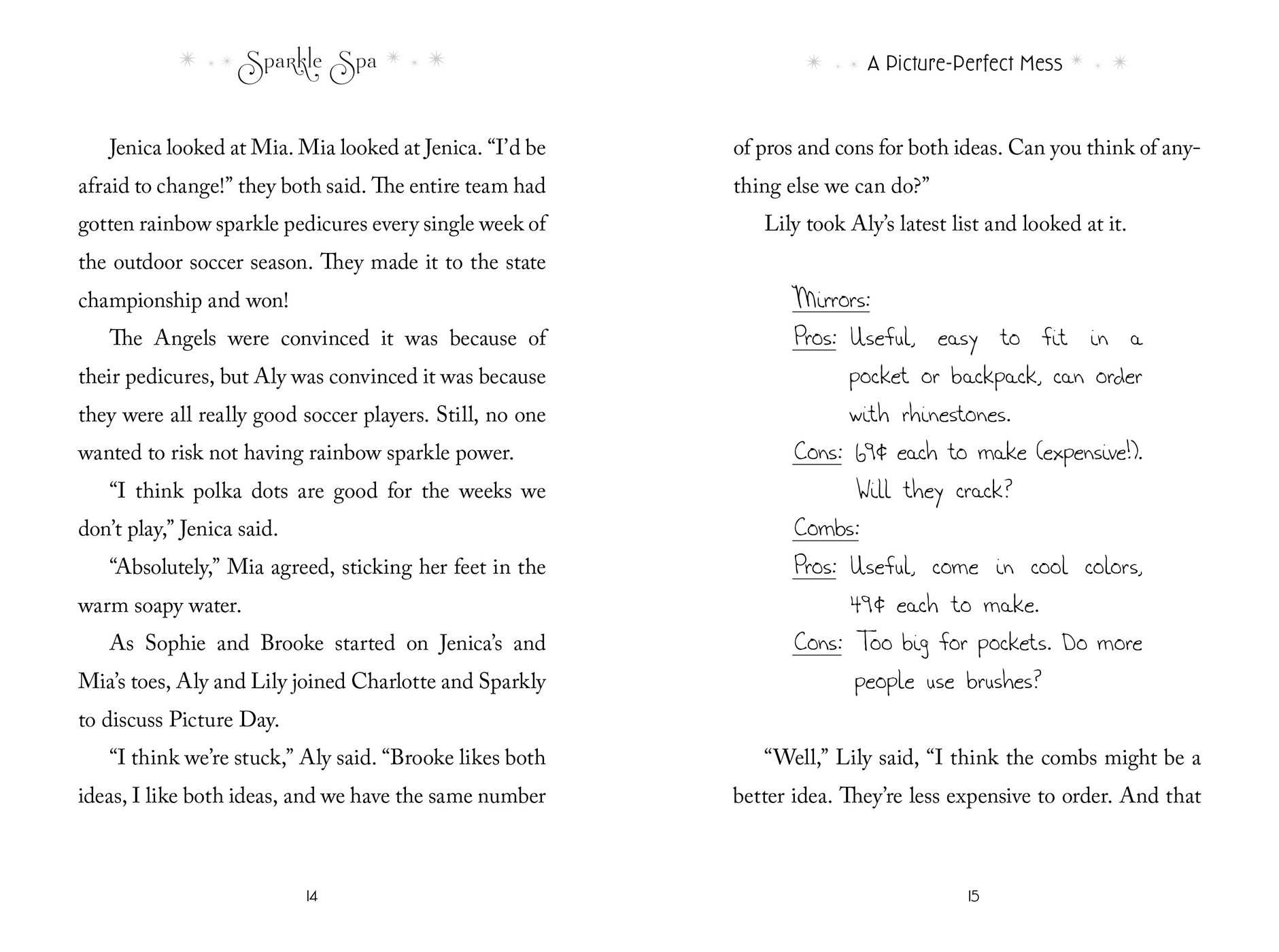 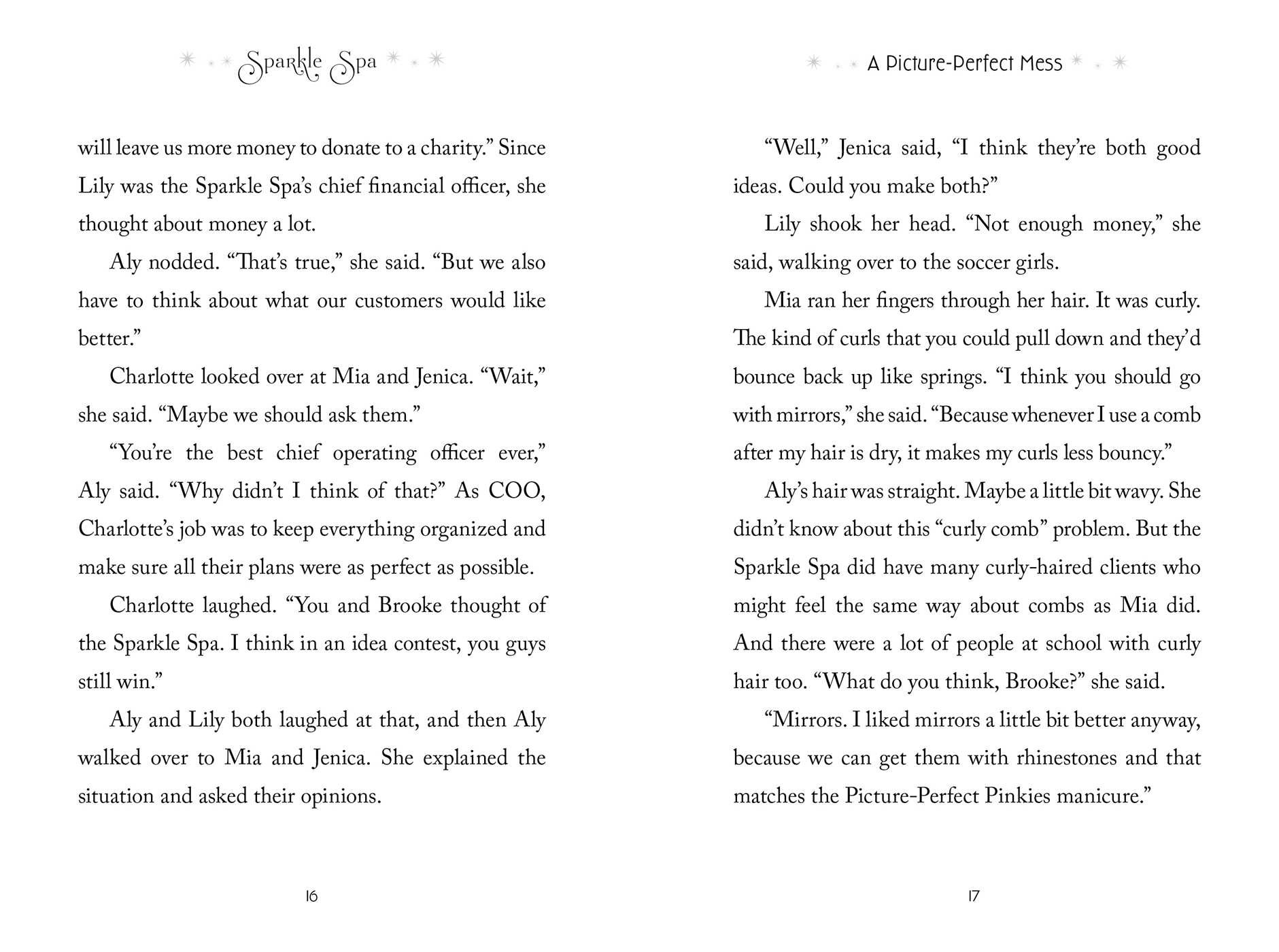 The Tanner sisters must find a way to outshine some not-so-friendly competition—and keep the Sparkle Spa in the spotlight!—as school picture day approaches.

It’s almost time for picture day at Auden Elementary School, and the Sparkle Spa will make sure everyone looks picture perfect. But Aly Tanner’s arch rival, Suzy Davis, decides she knows how to make everyone look even better than Aly and Brooke do. Suzy will set up “shop” in the girls’ bathroom at school and let everyone use lip gloss and blush and mascara. Will Suzy’s plan really outsmart—and out sparkle—the Sparkle Spa?

one Some Like It Hot Pink
Aly and Brooke Tanner were eating ants on a log. Not real ants or a real log, of course. It was an after-school snack of cream cheese and celery with raisins on top that Aly’s friend Charlotte’s mom had given a silly name.

But today Aly and Brooke were not at True Colors. Or at the Sparkle Spa, the salon they had started for kids their own age. Instead, the sisters were at Charlotte Cane’s house eating ants on a log and studying an Auden Elementary School flyer spread out in front of them on Charlotte’s kitchen table. Lily, Aly and Charlotte’s other best friend, was going to come too, but then she remembered that she had basketball practice. So just the three of them were looking at flyers.

“I can’t believe Mom’s finally letting me pick a background color for myself,” Brooke said, looking at Aly. “I think this might be the best Picture Day ever for me.”

Aly smiled at her sister. “Mom let me pick for the first time in third grade too.” That year, Aly had chosen the background that looked like a blackboard. It wasn’t the most exciting choice, but the photos had come out nice.

Picture Day wasn’t for a few weeks, but the flyers were due back to the teachers the next day, and the girls had to pick the backgrounds, which, as far as Aly was concerned, was the hardest—and most important—School Picture Day decision.

Charlotte inspected the paper in front of her. “It’s too bad you can’t draw some backgrounds, Brooke. The ones you made for the photo booth at the Angels’ soccer party were awesome.”

Brooke held up her flyer and pointed to a row of lockers that were the color of Purple People Eater nail polish. “I wish I could. If I added sparkles to this one, it would be so much cooler.”

“Last year the lockers that look like Yellow Submarine polish were my background,” Aly said, “and then I wore jeans and a red shirt with tiny blue polka dots. The colors looked really good together. You have to figure out what you want to wear so you don’t mess up and wear a yellow shirt on a yellow background. Otherwise, you blend right in.”

Brooke laughed. “You would look just like a head with arms and legs! I hope someone does that so we can see. Maybe Caleb would.” Caleb was Charlotte’s twin brother.

“My mom would totally ground him,” Charlotte said. “She picks out his background and Picture Day clothes anyway. He doesn’t care. None of his friends do.”

“I bet the boys don’t even know it’s Picture Day,” Brooke said. “Hey, Aly, do you think the shirt you wore in fourth grade would fit me yet? Because if it does, maybe I could wear it against this green grass background. What do you think?”

Aly studied her sister, who was wearing a unicorn T-shirt that used to be Aly’s when she was in third grade, and a Some Like It Hot Pink ruffled skirt that she’d picked out at the mall. “Not yet, Brookie. Probably next year,” Aly said. “When you’re in fourth.”

Every summer before school started, Brooke went through the clothes Aly had grown out of. A lot of times tops and shirts and sweaters Aly hardly wore became Brooke’s new favorites, like the unicorn T-shirt. Aly had worn it a few times, but Brooke lived in it.

“Maybe I could wear my teal dress,” she said. “You know, the one with the fringes—but I’m not sure it’ll look good on any of these backgrounds. I may need to think of something else. This is so, so hard.”

Brooke crunched a piece of celery and tugged her long braid. She always tugged on it when she was excited or worried or when she was thinking too hard.

“Do you think your mom’s going to let you wear nail polish for Picture Day?” Charlotte asked. She had just checked off a Sky Blues colored background. Since she and Aly had been close friends since they were in first grade, Charlotte knew all of Aly’s mom’s rules.

Brooke circled a white background with a black border around it. “I think I’m going to choose this one. Then I can wear whatever I want!” she said triumphantly. “And I think teal would look really nice against white. Right, Aly?”

Aly grinned. Then she circled the background that looked like a green field—the one Brooke had called grass. Green was Aly’s second favorite color. Plus, she was planning on wearing her denim skirt and a We the Purple–colored shirt, which she thought would go well with the green.

“You know,” Brooke said, getting up and stuffing the sheet into her backpack, “we should have an extra-special Special Occasion Manicure for Picture Day.”

The girls—well, mostly Brooke—thought up fancy manicures whenever there were special events, like the Fall Ball and the Dance Showcase and Adoption Day at Paws for Love.

“What do you mean by ‘extra-special’?” Charlotte asked.

Aly was glad that Brooke agreed. The two sisters were co-CEOs—chief executive officers—of the Sparkle Spa and were in charge of the spa together. After one disastrous week when Aly tried to take over and Brooke almost quit the salon completely, they made a rule that they had to agree on all spa decisions one hundred percent.

“Let’s make Picture-Perfect Pinkies signs and hang them all over school,” Charlotte suggested as she cleared the dishes.

Aly was about to agree, then she blurted, “Wait! I have another idea. Do you think we have enough money to buy mirrors? Or combs? We could print our message on them instead of the posters. And give them to everyone.”

Brooke tugged on her braid again. “I love the mirror idea. People can check to see how they look before their pictures are taken.”

Aly reached into her green backpack, took out a pen, and ripped out a page from her language arts notebook. It was time to make a list. Writing down things helped organize Aly’s thoughts, especially when the girls were brainstorming.

Aly tucked her hair behind her ear. It was too short to stay for very long, though, and fell back in front of her eye.

1. Count the money in the teal strawberry donation jar.

2. Research how much mirrors or combs cost

3. Find out how much time it would take to have them made.

4. Talk to Lily after she’s done with basketball practice, and have her double- and triple-check our plans.

Aly put down her pen and smiled at her sister. Perfect backgrounds, perfect outfits, and now a perfect Picture Day.