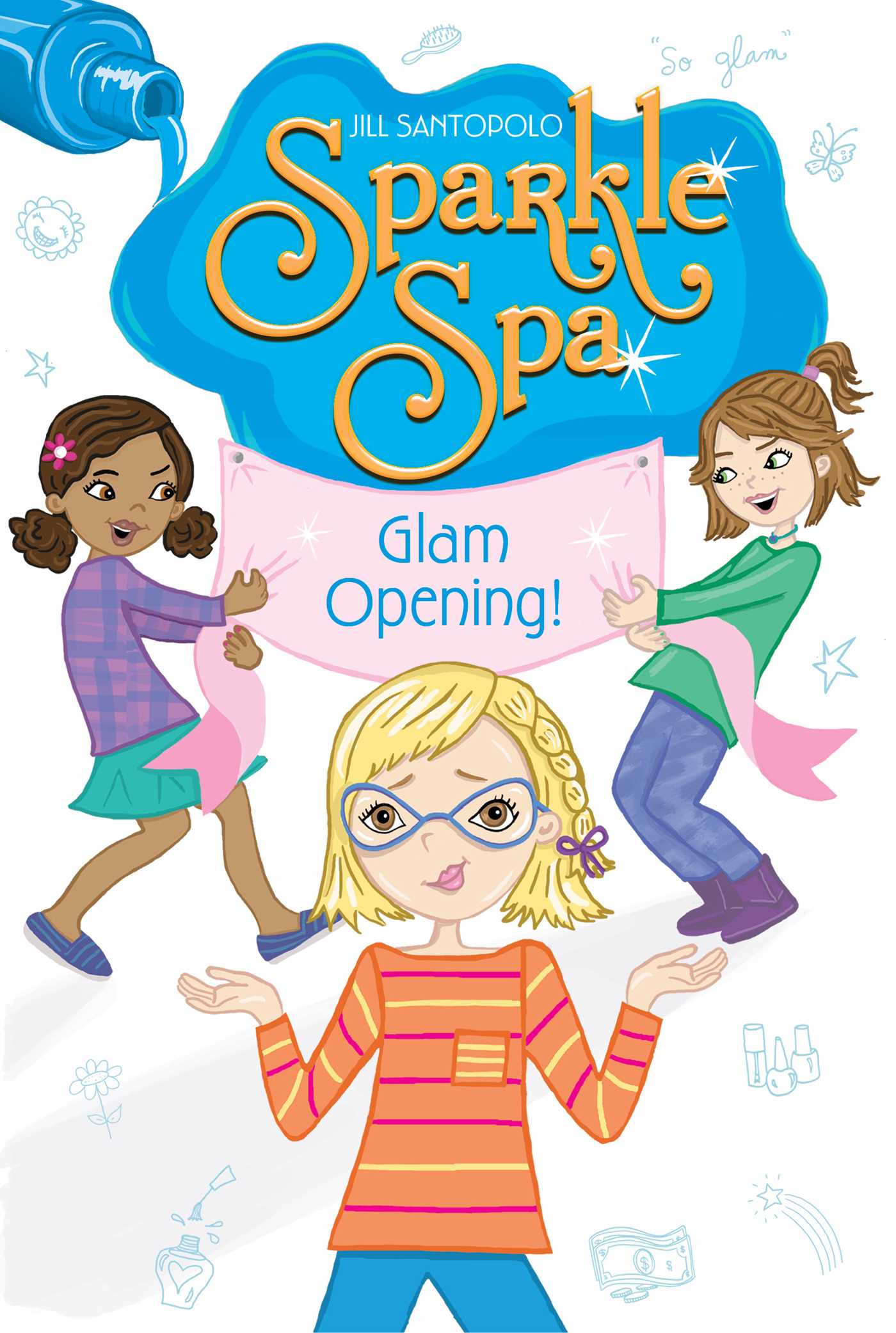 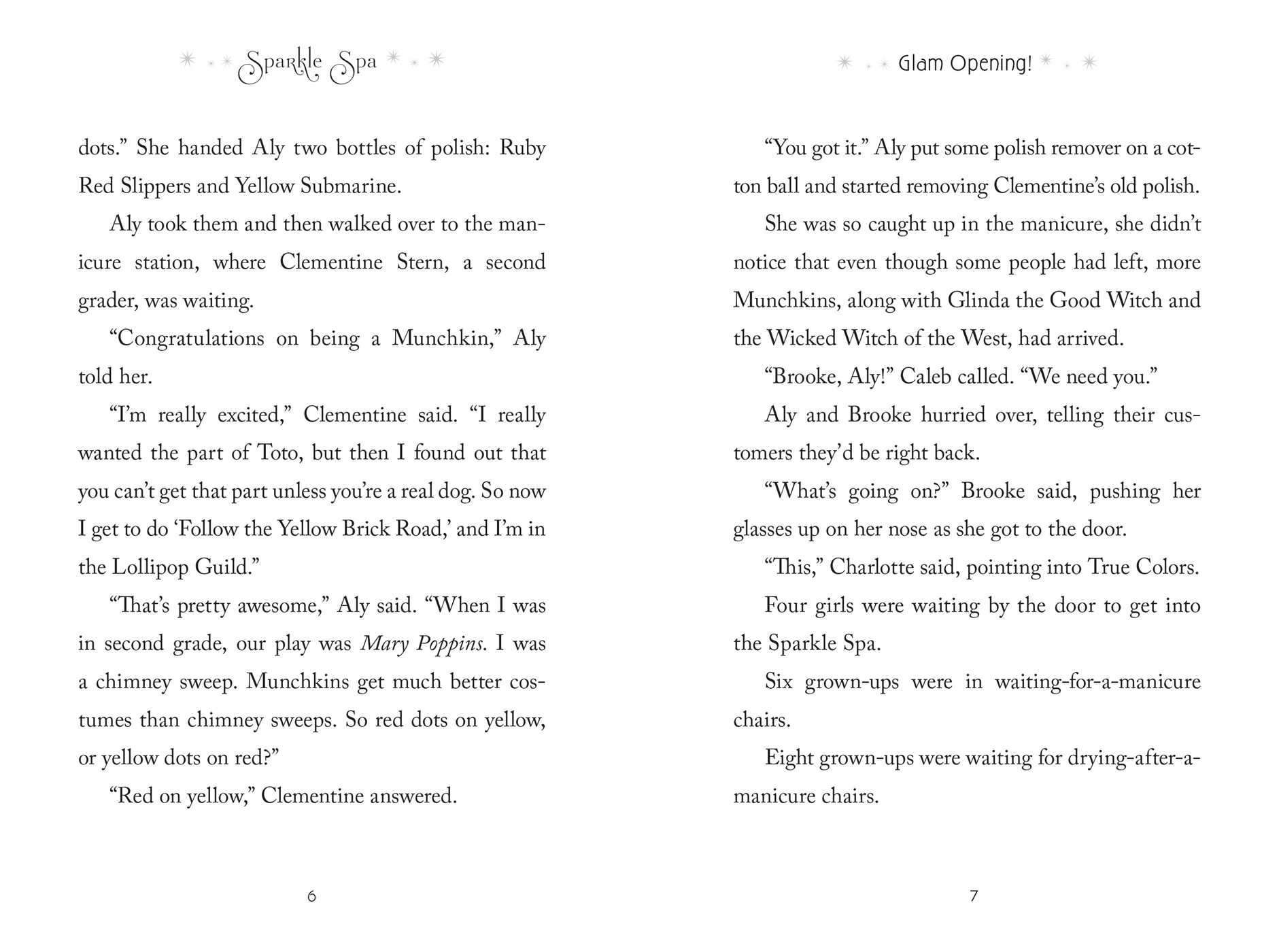 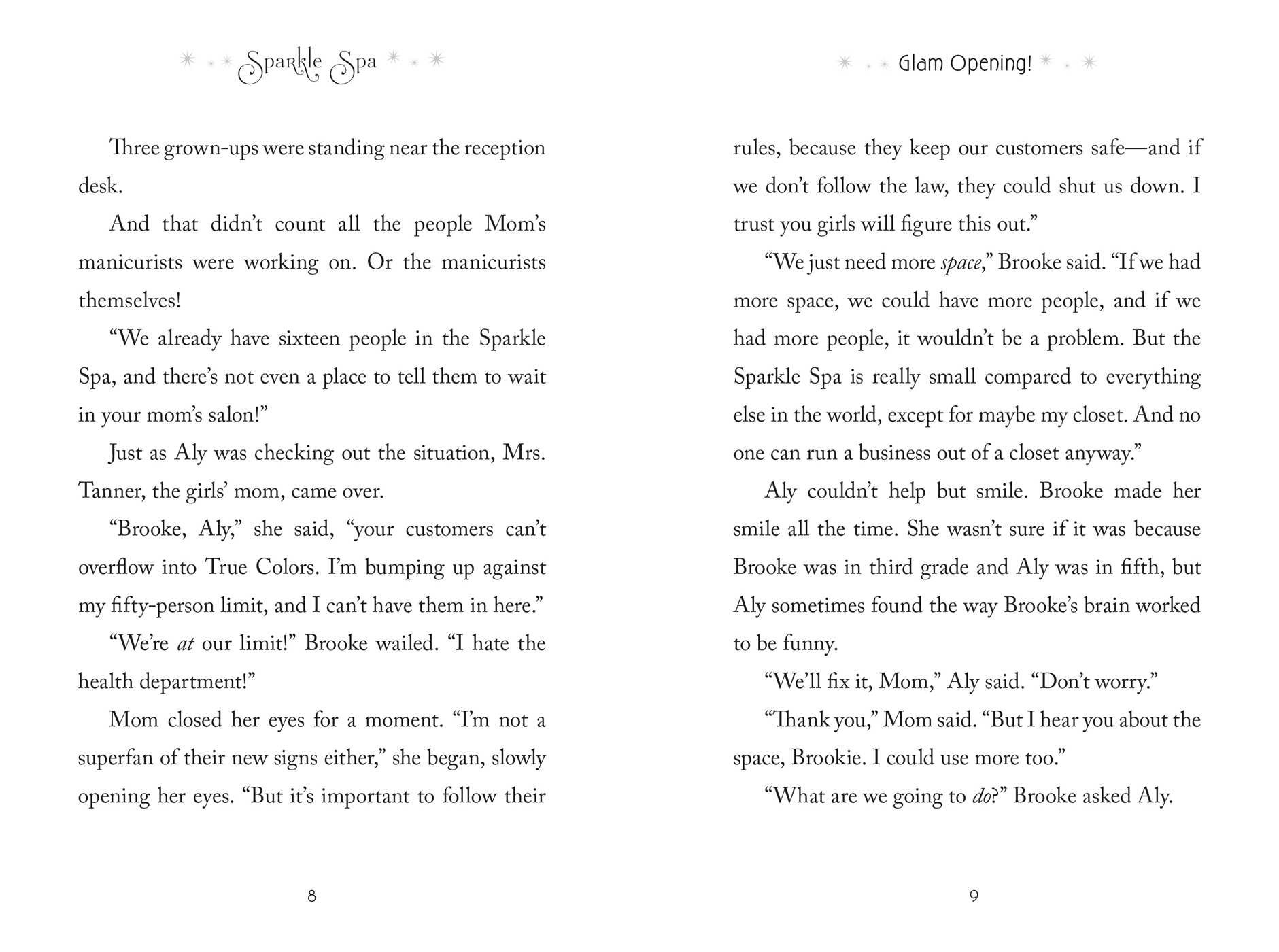 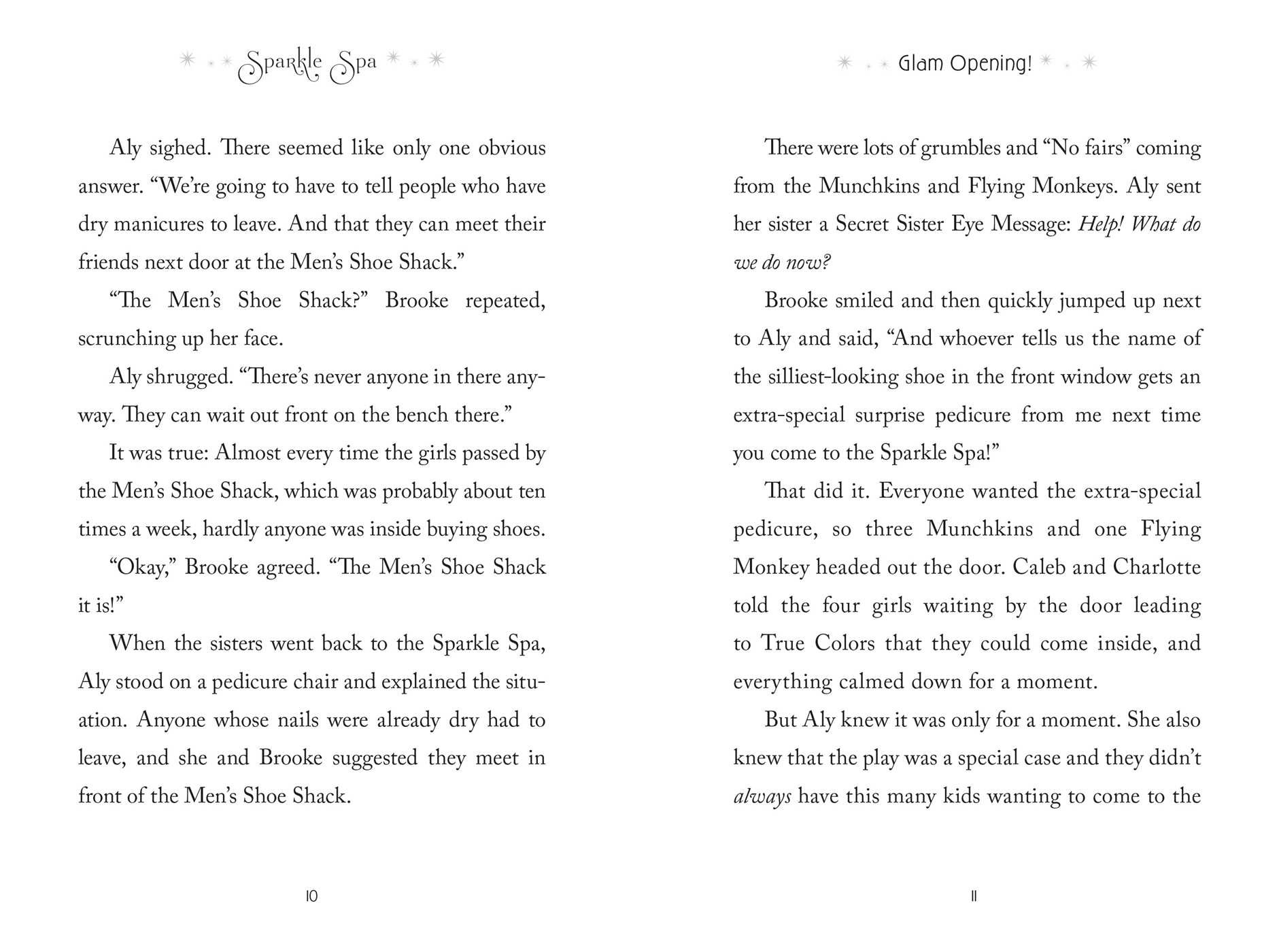 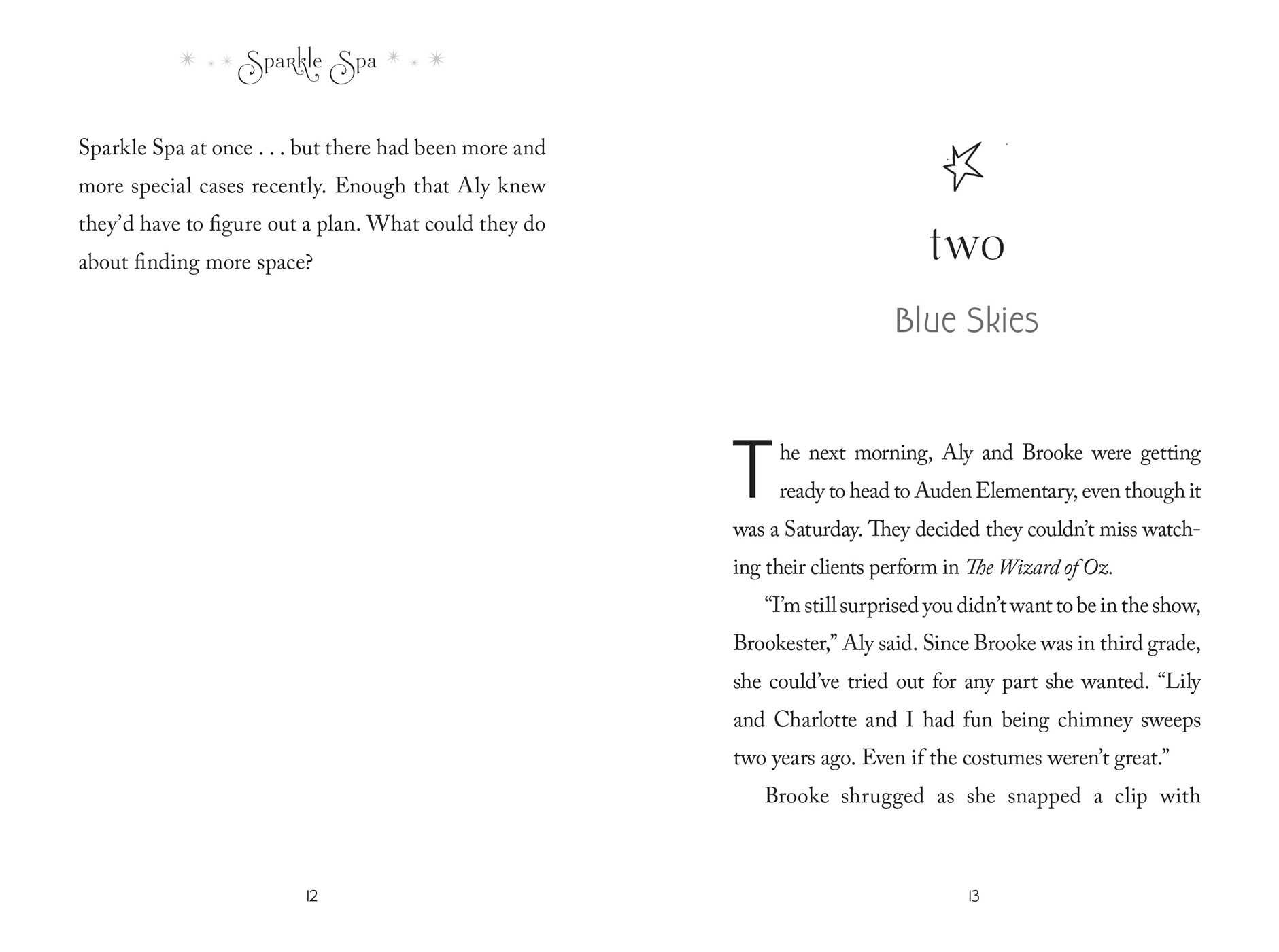 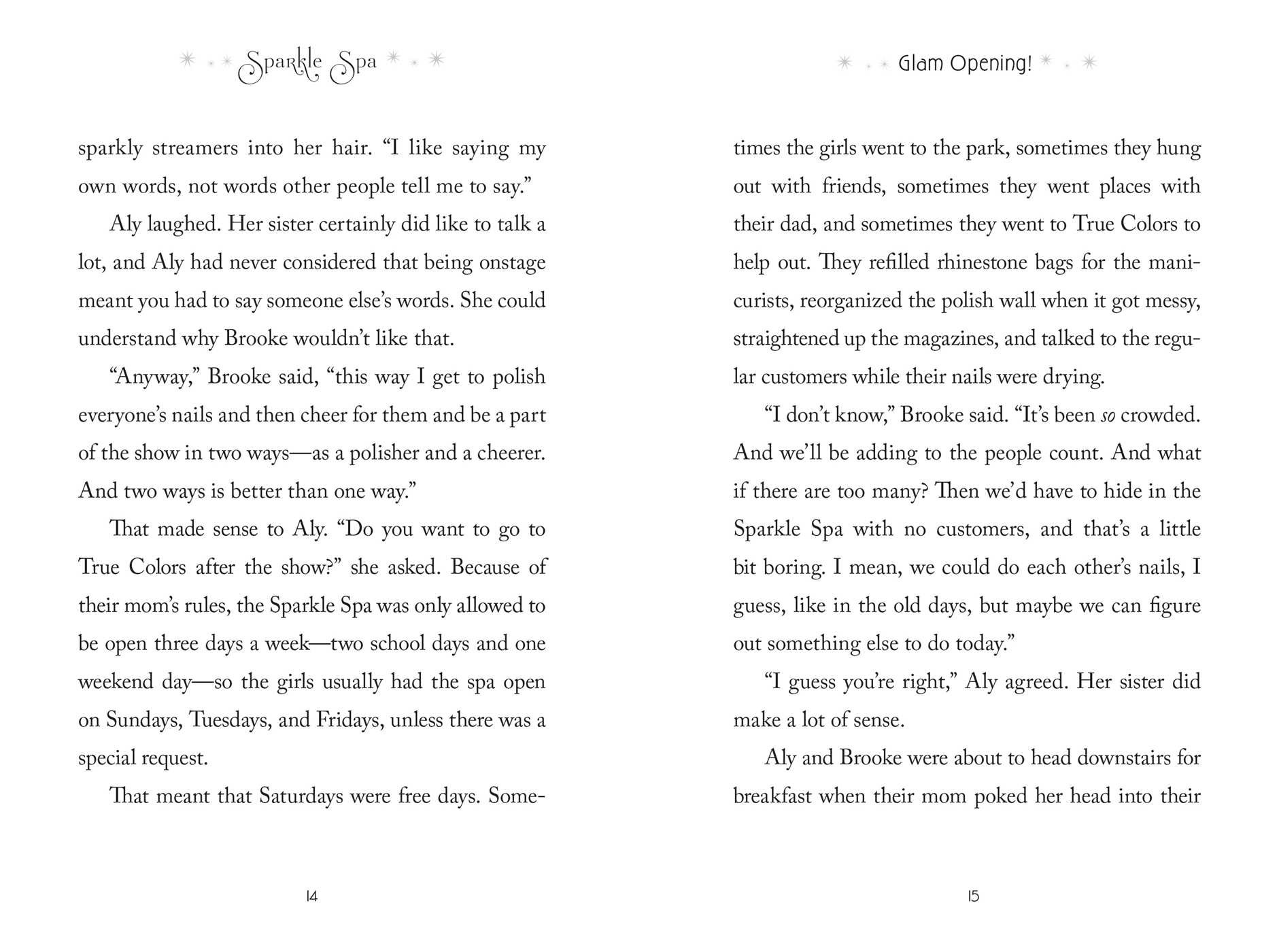 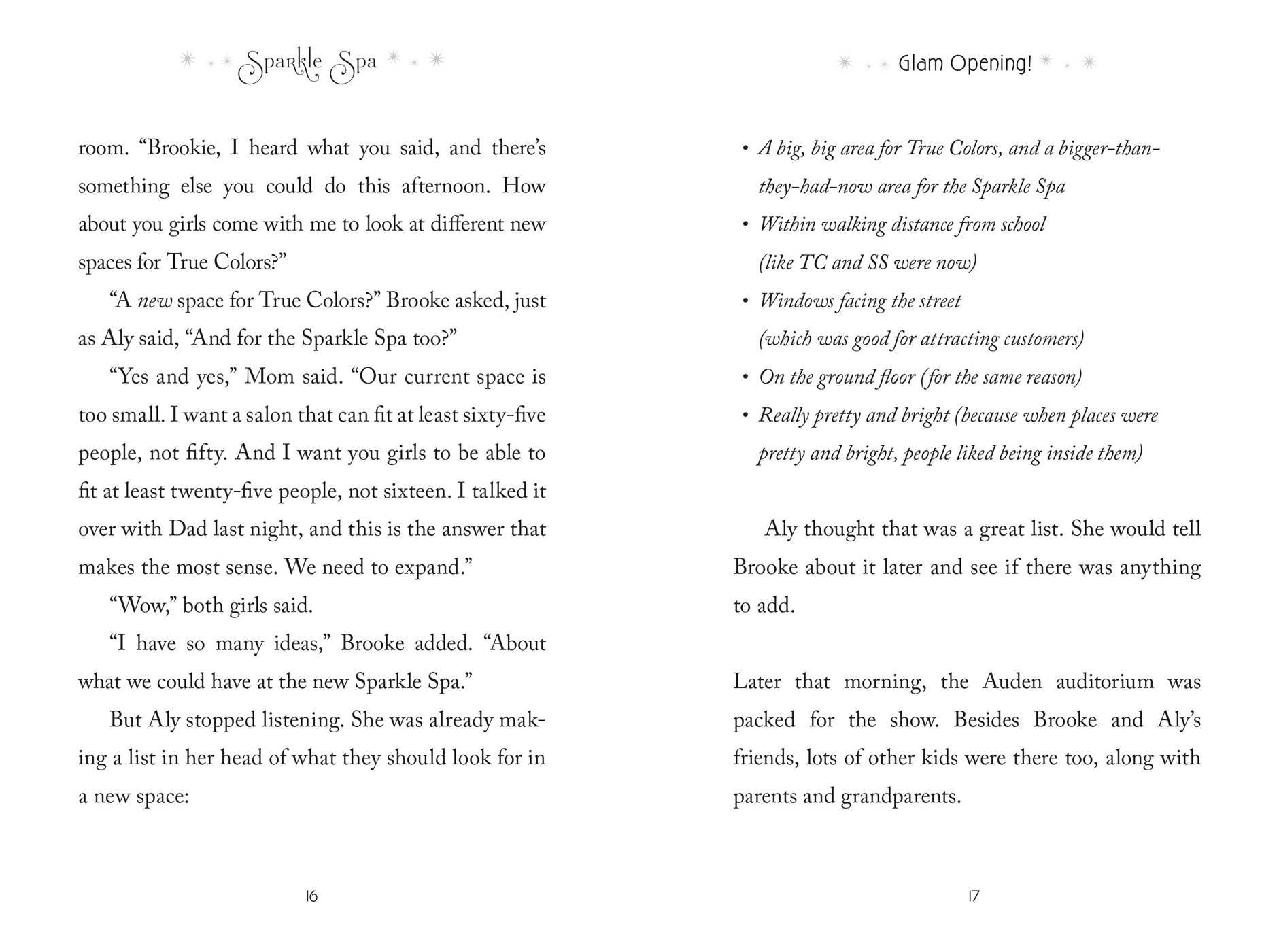 Brooke and Aly are forced to work with their nemesis in the tenth and final sparkly story in this shimmering series about two sisters who open their own mini-nail salon.

Have Aly and her nemesis Suzy Davis finally reached détente? Brooke and Aly’s mother and Suzy’s mother join forces and decide to open up a new salon. Does that mean the girls will actually have to work together in a brand-new Sparkle Spa? Like it or not, these frenemies are now in business together!

one Ruby Red Slippers
Munchkins, you can come over here with me!” Aly Tanner’s younger sister, Brooke, was standing on top of a teal pedicure chair. “Sophie and I have all the brightest colors!”

Aly was glad that Brooke was dealing with the Munchkins. The Flying Monkeys were on the opposite side of the Sparkle Spa, right near where Sparkly, the girls’ dog, was sleeping. They were looking at darker nail polish colors with Lily. And Charlotte was standing at the door with her twin brother, Caleb. She was checking names off the appointment list, and he was handling “security.” Caleb didn’t always help out at the Sparkle Spa, but once in a while, when the girls thought the salon would be extra crowded, they asked him to stand by the door to make sure there weren’t too many people coming into the salon at once. Today was the most crowded day Aly could remember.

She kept looking at the sign on the wall, the new one a man from the health department had put up last week. It said: OCCUPANCY BY MORE THAN 16 PEOPLE IS UNLAWFUL. There was a similar sign hanging right outside the Sparkle Spa, in Aly and Brooke’s mom’s salon, True Colors, but there you were allowed to have fifty people. If the girls and their mom didn’t obey the signs, the health department could close their salons—maybe even forever.

Aly counted: six Sparkle Spa workers, five Munchkins, and four Flying Monkeys. Luckily, Sparkly didn’t count, according to the health department, since he was a dog.

“Caleb,” Aly said, walking over to the door, “we’re only allowed one more person in the spa.”

He nodded. “I’ve been keeping track,” he answered.

While Aly was standing there, Jenica Posner came in from True Colors. “Hey,” she said. “Looks super-busy in there.”

Aly tucked her sweaty bangs behind her ear. “Yes,” she said. “Because the second- and third-grade play is The Wizard of Oz, a bunch of the Munchkins and Flying Monkeys wanted to get their nails done before tomorrow’s performance.”

“And they all want to stay to see how everyone else’s manicure looks?” Jenica guessed.

Jenica Posner was the coolest girl in all of Auden Elementary. She was the captain of the sixth grade girls’ soccer team, the Auden Angels, and was one of the main reasons that Aly and Brooke were allowed to start the Sparkle Spa in the first place. One day when True Colors was extra busy, Mom let Aly give Jenica a rainbow sparkle pedicure. Jenica scored a ton of goals in her next soccer game, and before long all the Angels wanted rainbow sparkle pedicures.

True Colors couldn’t fit them into its daily appointments, so Aly and Brooke were able to start their own salon, the Sparkle Spa, in the spare back room of their mom’s salon. There were lots of rules the girls had to follow, but they’d been doing a great job, and their salon had been open for almost the whole school year. The Angels still came by for rainbow sparkle pedicures every Tuesday, but sometimes Jenica stopped by to say hello when her nana was getting a manicure in True Colors.

“Your mom’s salon is pretty crowded today too,” Jenica said, stepping into the Sparkle Spa.

“Bridal party,” Aly said. “In addition to regulars. And the health department came by yesterday to give us these signs about how many people could be in each space. You’re the very last person who can be in the Sparkle Spa right now, until someone leaves. You’re number sixteen.”

“Wow,” Jenica said. “You’d better get some of these Munchkins out of here.”

Aly nodded. “I should probably start doing some manicures.”

“Sounds good,” Jenica said. “At least when the Angels come, we don’t stay too much past our drying time!” Then she turned and headed back into True Colors.

Aly took them and then walked over to the manicure station, where Clementine Stern, a second grader, was waiting.

“Congratulations on being a Munchkin,” Aly told her.

“I’m really excited,” Clementine said. “I really wanted the part of Toto, but then I found out that you can’t get that part unless you’re a real dog. So now I get to do ‘Follow the Yellow Brick Road,’ and I’m in the Lollipop Guild.”

“That’s pretty awesome,” Aly said. “When I was in second grade, our play was Mary Poppins. I was a chimney sweep. Munchkins get much better costumes than chimney sweeps. So red dots on yellow, or yellow dots on red?”

“You got it.” Aly put some polish remover on a cotton ball and started removing Clementine’s old polish.

She was so caught up in the manicure, she didn’t notice that even though some people had left, more Munchkins, along with Glinda the Good Witch and the Wicked Witch of the West, had arrived.

Aly and Brooke hurried over, telling their customers they’d be right back.

“What’s going on?” Brooke said, pushing her glasses up on her nose as she got to the door.

Four girls were waiting by the door to get into the Sparkle Spa.

Six grown-ups were in waiting-for-a-manicure chairs.

Three grown-ups were standing near the reception desk.

And that didn’t count all the people Mom’s manicurists were working on. Or the manicurists themselves!

“We already have sixteen people in the Sparkle Spa, and there’s not even a place to tell them to wait in your mom’s salon!”

Just as Aly was checking out the situation, Mrs. Tanner, the girls’ mom, came over.

“Brooke, Aly,” she said, “your customers can’t overflow into True Colors. I’m bumping up against my fifty-person limit, and I can’t have them in here.”

“We’re at our limit!” Brooke wailed. “I hate the health department!”

Mom closed her eyes for a moment. “I’m not a superfan of their new signs either,” she began, slowly opening her eyes. “But it’s important to follow their rules, because they keep our customers safe—and if we don’t follow the law, they could shut us down. I trust you girls will figure this out.”

“We just need more space,” Brooke said. “If we had more space, we could have more people, and if we had more people, it wouldn’t be a problem. But the Sparkle Spa is really small compared to everything else in the world, except for maybe my closet. And no one can run a business out of a closet anyway.”

Aly couldn’t help but smile. Brooke made her smile all the time. She wasn’t sure if it was because Brooke was in third grade and Aly was in fifth, but Aly sometimes found the way Brooke’s brain worked to be funny.

“Thank you,” Mom said. “But I hear you about the space, Brookie. I could use more too.”

“What are we going to do?” Brooke asked Aly.

Aly sighed. There seemed like only one obvious answer. “We’re going to have to tell people who have dry manicures to leave. And that they can meet their friends next door at the Men’s Shoe Shack.”

“The Men’s Shoe Shack?” Brooke repeated, scrunching up her face.

Aly shrugged. “There’s never anyone in there anyway. They can wait out front on the bench there.”

It was true: Almost every time the girls passed by the Men’s Shoe Shack, which was probably about ten times a week, hardly anyone was inside buying shoes.

When the sisters went back to the Sparkle Spa, Aly stood on a pedicure chair and explained the situation. Anyone whose nails were already dry had to leave, and she and Brooke suggested they meet in front of the Men’s Shoe Shack.

There were lots of grumbles and “No fairs” coming from the Munchkins and Flying Monkeys. Aly sent her sister a Secret Sister Eye Message: Help! What do we do now?

Brooke smiled and then quickly jumped up next to Aly and said, “And whoever tells us the name of the silliest-looking shoe in the front window gets an extra-special surprise pedicure from me next time you come to the Sparkle Spa!”

That did it. Everyone wanted the extra-special pedicure, so three Munchkins and one Flying Monkey headed out the door. Caleb and Charlotte told the four girls waiting by the door leading to True Colors that they could come inside, and everything calmed down for a moment.

But Aly knew it was only for a moment. She also knew that the play was a special case and they didn’t always have this many kids wanting to come to the Sparkle Spa at once . . . but there had been more and more special cases recently. Enough that Aly knew they’d have to figure out a plan. What could they do about finding more space?