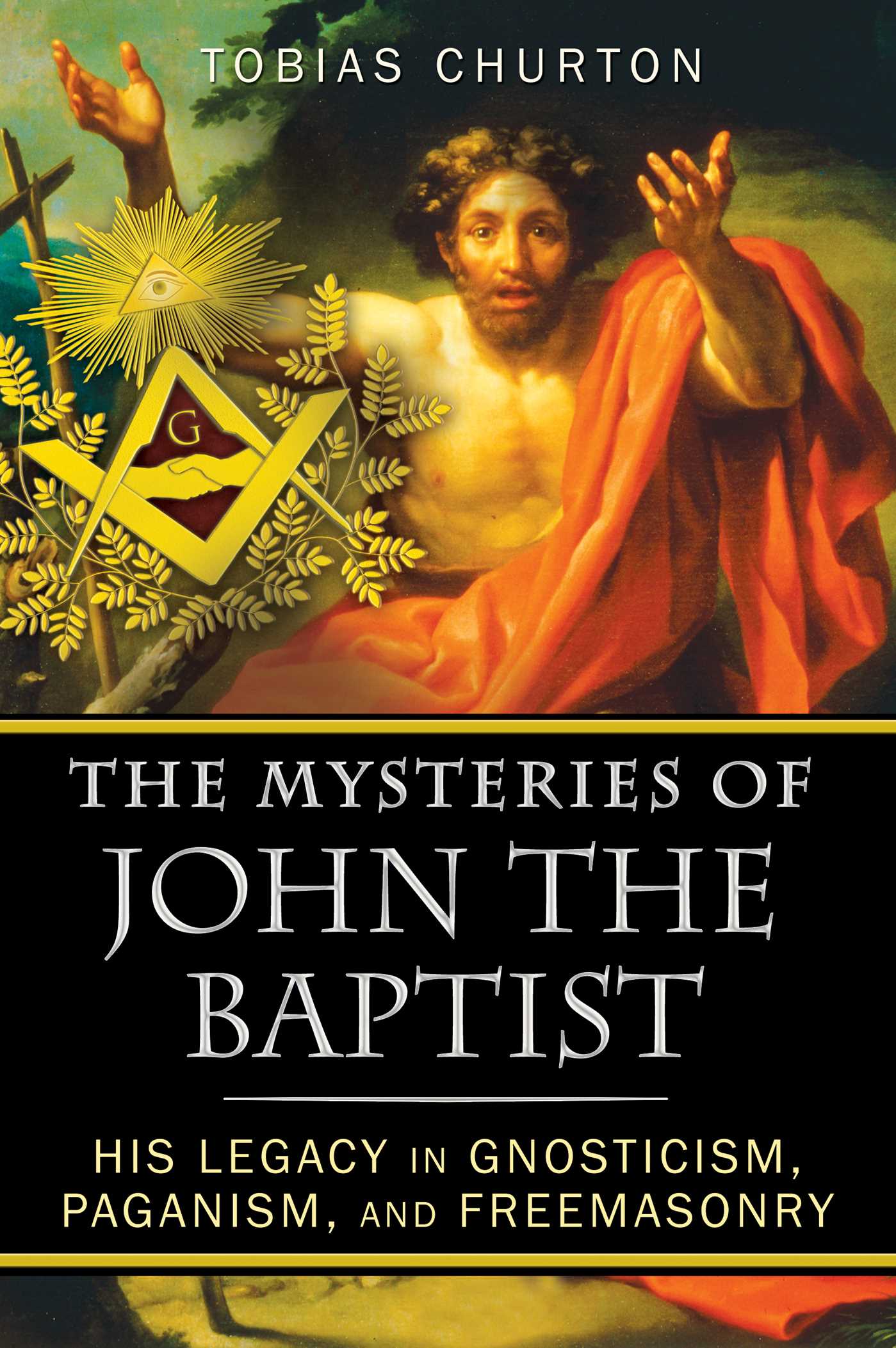 • Explores why John the Baptist is so crucially important to the Freemasons, who were originally known as “St. John’s Men”

• Explains the connections between John as lord of the summer solstice, his mysterious severed head, fertility rites, and ancient Jewish harvest festivals

Few Freemasons today understand why the most significant date in the Masonic calendar is June 24th--the Feast of the Birth of St. John the Baptist and the traditional date for appointing Grand Masters. Nor do many of them know that Masons used to be known as “St. John’s Men” or that John the Baptist was fundamental to the original Masonic philosophy of personal transformation.

Starting with the mystery of John in Freemasonry, Tobias Churton searches out the historical Baptist through the gospels and ancient histories, unearthing the real story behind the figure lauded by Jesus’s words “no greater man was ever born of woman.” He investigates John’s links with the Essenes and the Gnostics, links that flourish to this day. Exposing how the apostle Paul challenged John’s following, twisting his message and creating the image of John as “merely” a herald of Jesus, the author shows how Paul may have been behind the executions of both John and Jesus and reveals a precise date for the crucifixion and the astonishing meaning of the phrase “the third day.” He examines the significance of John’s severed head to holy knights, such as the Knights Templar, and of Leonardo’s famous painting of John. Churton also explains connections between John, the summer solstice, fertility rites, and ancient Jewish harvest festivals.

Revealing John as a courageous, revolutionary figure as vital to the origins of Christianity as his cousin Jesus himself, Churton shows how John and Jesus, as equal partners, launched a covert spiritual operation to overcome corruption in the Temple of Jerusalem, re-initiate Israel, and resurrect Creation.

Chapter Two
St. John’s Men and the Passion of the Corn

Unusually for a saint’s day, June 24 was the date Christian tradition allotted to John’s birth, not his death. In fact, John’s birthday was the accepted date of Midsummer, close to the summer solstice, when the Earth receives her most intimate embrace from the visible source of light and life at our system’s center. Seventeenth-century Freemasons called the sun the “jewel” of the Lodge. The Jewel was said to rest first on the Lodge’s Master, who, like the Sun and the Square, was called a “Light” of the Lodge, enthroned in the East whence the sun rose. The Freemason works in the day, in the light, in conformity with the pattern of the universe. The symbolic Masonic Lodge is effectively a microcosm, a “little universe”: as above, so below.

Since time immemorial, St. John the Baptist, who slept beneath the stars, had been an established patron saint of Freemasons. His great significance may be discerned from the records of the Old Dundee Lodge.

Old Dundee’s records show that between 1748 and 1775 the Lodge received some six visits a year from persons who signed themselves as “St. John’s Men.” St. John’s Men generally paid an extra fee for their visit, a kind of penalty for having come from lodges outside of the Grand Lodge Rolls. Their lodges had not, would not, or had not yet conformed to the new system. Instead, they were distinguished by looking to St. John as their seal of authority. Even though independent of the Grand Lodge, St. John’s Men were permitted to visit “regular” brethren accepted by the Grand Lodge. Because London’s Grand Lodge did not absorb all Masons at once, and because it certainly encountered resistance to its advances on existing lodges around the country--especially in Scotland and Ireland--we may reasonably suppose there were during the period a goodly number of “St. John’s Men” or “St. John’s Masons” around the kingdom. In fact, no less than 162 St. John’s Men signed the Minute Book of the Old Dundee Lodge of London between 1748 and 1775.

St. John appears to have been an identity-focus for pre-Grand Lodge fraternities who valued their autonomy. An anonymous “irregular” Masonic catechism called The Grand Mystery of Free-Masons Discover’d, published without Grand Lodge authority in 1725, insists on the St. John identity in greeting fellow Masons: “I came from a right worshipful Lodge of Masters and Fellows belonging to Holy St. John who doth greet all perfect Brothers of our Holy Secret; so do I you, if you be one.”

Evidence from the late seventeenth century confirms the Baptist’s significance to Freemasons, before the appearance of the Grand Lodge. A rare Masonic catechism from the Sloane Manuscript, named after its preserver, antiquarian and botanist Sir Hans Sloane, contains questions and answers that once passed between fellows and candidates for admission to lodges. Here is an example:

Q: Where was the first word given?
A: At the Tower of Babylon [Babel].
Q: Where did they first call their Lodge?
A: At the holy Chapel of St. John.

We may justly suspect the “holy Chapel of St. John” to have been a euphemism for the wilderness, for that is where St. John the Baptist stood in communion with God and where he centered his upright spiritual building. The wilderness is the place where the divine voice, or Word, declares that a path will be made straight, as John the Baptist famously declared, echoing Isaiah’s ancient prophecy. The voice crying in the wilderness announces the Way--the straight way--the way of return to the true Temple of God. On this principle John stood, and endured to the end. And it is worth adding that while we automatically think of John’s path in the wilderness to be a horizontal road of returning exiles to Zion, that is, a path across the earth and stones, we should consider the possibility that enlightened Masons and others may have understood the path to be vertical, to the stars and heavens beyond: a Jacob’s Ladder or upstanding Square. We may recall Leonardo’s John, pointing upward. The straight road is a spiritual path and operates in both directions. A path is made so that a higher principle may descend by it as the restored spirit of fallen Man simultaneously “ascends.”

Distance from the stain of a corrupt civilization is likewise recommended elsewhere in the Sloane Manuscript. A catechism asks the candidate to consider that the “just and perfect lodge” is to be found “on the highest hill or Lowest Valley of the world, without the crow of a Cock or the Bark of a Dog.” This is of course the perfect Lodge. It is constituted in the imagination, as becomes clear when the Candidate, on being asked “How high is your Lodge?” is to answer: “Without foots, yards, or inches it reaches to heaven.” This ideal, microcosmic Lodge appears to have been enacted in the upper rooms of taverns in the teeming city that emerged in the forty years after London’s Great Fire of 1666, when the work of members of the London Masons’ Company (formerly the London Freemasons’ Company) was in great demand.

“In The Mysteries of John the Baptist, Tobias Churton has produced a remarkably fresh analysis of the “herald of the Messiah.” The great value of this book is that Churton provides not only a careful overview of the role of John, as handed down in Christian tradition, but gives us a unique and erudite reanalysis of the role of the Baptist using the lenses of Gnosticism, Freemasonry, and other esoteric traditions that have elevated John to a position equal to or superior to Jesus. This book is a truly invaluable addition to scholarly literature on John the Baptist.”

“The Mysteries of John the Baptist is a recommended coverage for any collection interested in the mystery of John in Freemasonry and the historical Baptist as presented in the gospels and early histories...a powerful spiritual and religious survey recommended for Christian and new age holdings alike.”

“Mr. Churton has a deep understanding of the Gospels thanks in part to his desire to ask questions that go well beyond the accepted creed. Add to that his desire to place the Gospels in real historic and esoteric contexts, and the result is a work that deserves a spot among the most sophisticated interpretations of Jesus’s era.”