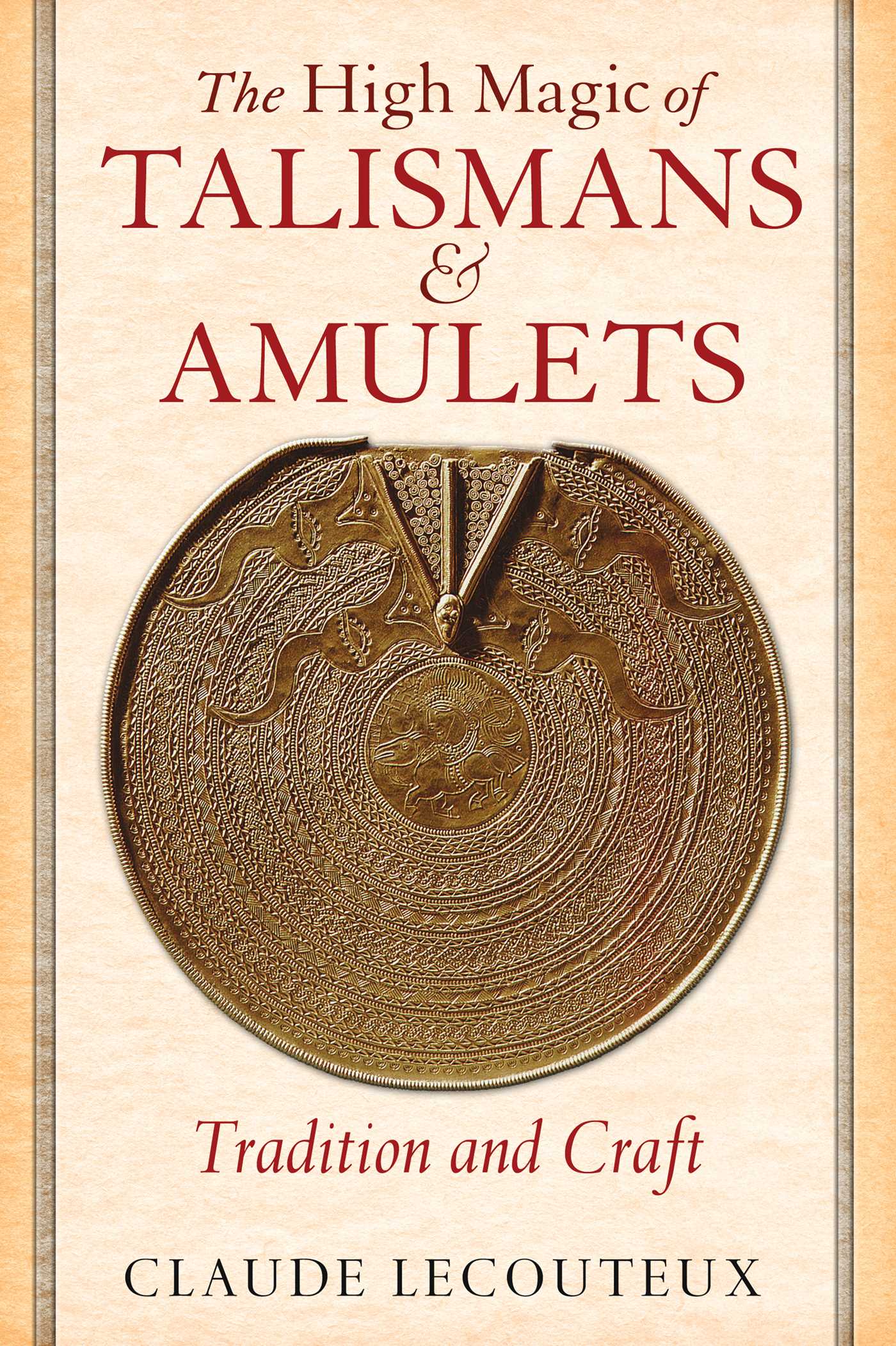 The High Magic of Talismans and Amulets

By Claude Lecouteux
LIST PRICE $13.99
PRICE MAY VARY BY RETAILER

• Provides an in-depth look at the medieval and Renaissance use of amulets and talismans, including the work of Agrippa, Albertus Magnus, and Athanasius Kircher

• Provides a full summary of the magical knowledge required to make an amulet or talisman, including the invocations required to activate their powers

• Reviews different kinds of amulets and talismans, from ancient jewelry and magical objects to the modern rabbit’s foot or lucky horseshoe

The use of talismans and amulets stretches back nearly to the dawn of man, from everyday items magically prepared, such as horns or coins, to intricate and beautiful jewelry imbued with protective powers.

Drawing on his private collection of medieval manuscripts as well as his privileged access to the rare book archives of major European universities, Claude Lecouteux provides a comprehensive history of the use of talismans and amulets for protection, healing, and divine influence. He explores their use in the Western Mystery Tradition as well as Eastern and Middle Eastern beliefs about these magical objects and their incorporation--despite Church anathema--into the Christian tradition of Medieval Europe. Reviewing many different kinds of amulets and talismans used throughout the ages, such as a rabbit’s foot, horseshoe, gris-gris bag, or an inscribed parchment charged through ritual, he details the principles and symbology behind each object and shows that their use is still as widespread today as any time in the past.

Lecouteux explains the high magic behind the hermetic art of crafting amulets and talismans: the chains of sympathy, astrological geography, and the invocations required to activate their powers. He explores the work of adepts such as Agrippa, Albertus Magnus, and Athanasius Kircher, including an in-depth look at Kircher’s work on planetary seals in his Oedipus Aegyptiacus.

Illustrated throughout with period art depicting magical symbols, seals, and a wide array of talismans and amulets, this comprehensive study provides a practical guide to the historical development and step-by-step creation of magical objects.

CHAPTER 4
THE MEDICINE OF AMULETS AND TALISMANS

IN THE MIDDLE AGES

Before they become the subject of specialized treatises like that by Costa ben Luca, phylacteries could often be found in the medical literature. Hildegard von Bingen, for example, provides us a recipe for healing a possessed individual who is an epileptic.

If a person is in the power of an evil spirit, another person should place a sapphire on some earth, then sew that earth into a leather sack, and hang it from his neck. He should say, “O you, most wicked spirit, quickly go from this person, just as, in your first fall, the glory of your splendor very quickly fell from you.”

What smacks of magic according to theologians is often the remnants of iatromathematics and astrology. Jean Bodin noted in 1580: Because the Arabs knew the strength of celestial forces on the body, they did not want any doctor accepted if he did not also possess knowledge of Astrology and those who possessed both arts were called Iatromathematicians in Greece.

In the Sacred Book of Hermes to Asklepius it is said that each sign of the zodiac rules over the part of the body belonging to it and causes an illness in those surrounding it. If one wishes to be spared, one must carve the forms and characters of the decans in the stone that belongs to each one and add to it its plant. Once this has been done, one wears it like an amulet and thus has at his “disposal a powerful and auspicious remedy for the body.” This treatise gives us the names of the decans and their corresponding stones and plants.

We will revisit this topic.
Anthony of Florence (d. 1459) drew up a list of the most widespread superstitions of his time in Italy and imparts information that reveals we are dealing with universally held beliefs that touch on magical healing.

“Have you recited incantations or had them recited to obtain health?” he asks. “Have you written on an almond, a host, or any other things, speech [words] intended to protect against fever and worms? Have you recited incantations or had them recited against pains of the teeth, head, belly, or eyes, with a fava bean and the Our Father, or something similar? Have you crafted or had crafted amulets or talismans smacking of superstition, either by their words, or by their signs, or by the materials from which they are made, or by the way they are placed on patients, or by the way they are worn, or by the time and place in which they were written? If they smack of superstition, they must be burned and whoever refuses to so shall not be absolved because they are committing a mortal sin. Have you, as an amulet, worn a piece of parchment called Saint Cyprian’s Charter, or a charter of unborn or virgin parchment, in other words vellum, or some similar thing to recover your health, or for some other superstitious reason which does not naturally fall under the jurisdiction of the medical art or any other?”

Unborn parchment is that taken from a stillborn animal; some ancient authors go so far as to claim it was the skin of a stillborn child!

Michael Herr, municipal doctor of Strasbourg in the first half of the sixteenth century, left an interesting account in his New Bestiary in which he describes common animals and the remedies that can be taken from them. He tells us that the paw cut from a still-living rabbit reduces gout if carried on the person, and that a bone or paw from the same animal affords protection against stomachache. Rings were made from elk hooves because they granted protection against epilepsy, called “Saint Valentine’s Disease”; those made from the black callus of a buffalo’s hooves or horns prevented cramps if worn on a finger or toe, and, to increase its effectiveness, some people wrapped it in wires made from four different metals: gold, silver, copper, and iron. The dried tongue of a fox bound to the right arm and worn continuously protected one from afflictions affecting the eyes and face, and wolf excrement sealed inside a small clay pot worn at the neck removed pain. Michael Herr specifies that the turd must be white and must never have touched the ground, which is possible when it remained hanging in a bush. The string used to hang it from the neck had to be made from sheep that had been killed by wolves.

We find survivals or amazing correspondences with Michael Herr’s observations in the information provided by Paul Sebillot in his Folklore of France. For example, it was believed in the Vosges region that a ring made from the white callus taken from a donkey’s hoof is excellent against epilepsy.
Claude Lecouteux

“This is the only talisman book you will ever need. In this expansive tome, Lecouteux has unified information never before assembled in one place. This book is a useful guide and a wellspring on the subject, drawing from cultures throughout time and around the globe. Here, given to the readers, are historical examples of famous talismans and amulets, their meanings and origins, and explanations on how to generate them.”

“Recommended to anyone interested in this topic. It doesn’t explain all the secrets of talisman-making, but it does sort out the specifics of materials, methods, and the evolution of talisman-making practices through the Middle Ages in Europe.”

The High Magic of Talismans and Amulets

By Claude Lecouteux
LIST PRICE $13.99
PRICE MAY VARY BY RETAILER