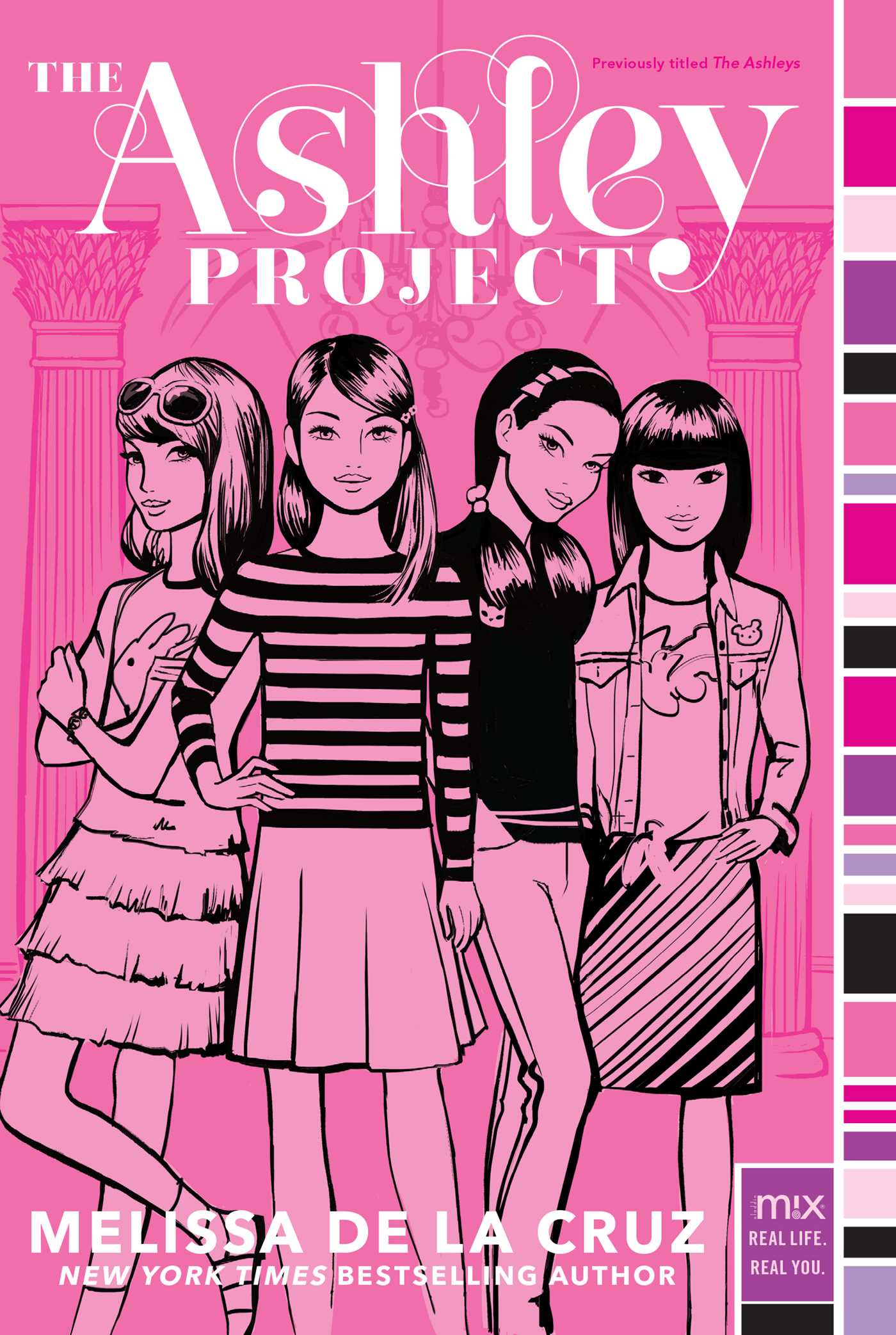 Think you know mean girls? Meet the Ashleys in this start to a fashion-savvy series from bestselling author Melissa de la Cruz.

Meet The Ashleys. Ashley Spencer, Ashley “Lili” Li and Ashley “A. A.” Alioto are the queen bees of Miss Gambles Preparatory School for Girls. They have it all: they’re rich, gorgeous, impeccably fashion forward, and everyone wants to be them.

And then there's Lauren Page. Former loser, she’s changed her ways now that her father’s company went public last month. Lauren’s upgraded to a mansion in Pacific Heights with a view of the marina and a Bentley with a driver named Thomas. Last year she was a nobody, but this year is going to be totally different. Lauren’s gone from geek to goddess, bargain-basement cast-offs to off-the runway couture… and she’s had enough of the current regime. Her parents tried, but they got it wrong: her name is Lauren, but she’s so obviously an Ashley.

[The Ashley Project was originally published as The Ashleys and now features a new cover and title.]

The Ashley Project 1 THE NOT-SO-NEW GIRL
LAUREN PAGE SMOOTHED DOWN THE folds of her short plaid skirt and crossed her legs so that she could admire the shiny new black-and-white Chanel spectator oxfords on her feet a little better. They looked so cute with her thick cashmere socks scrunched down just above the ankle, she thought. She’d been wearing the same green plaid uniform to Miss Gamble’s all her life, but she was in the upper form now—seventh grade—which meant saying good-bye to her boring old Buster Browns and hello to the first boy-girl dance with the hotties from Gregory Hall, which was only three weeks away. And as far as she was concerned, upper form meant a whole new Lauren.

She leaned back on the plush, baby-soft leather seat in her dad’s sparkling new Tesla and pressed a button that flipped a mirror on the console in front of her.

Sometimes she couldn’t believe it herself. The girl who smiled back from the mirror looked nothing like the old Lauren. This one had pin-straight chestnut brown hair that fell softly on her shoulders and shone with reddish and caramel gold highlights, a killer spray tan, and cheekbones so sharp they could cut ice. Lauren felt a little like those young starlets who lost so much weight and started looking so hot that people whispered they’d had major plastic surgery. Lauren turned her head sideways to try and get a good look at her profile. Her nose certainly looked different now that her baby fat had melted away.

“Nervous?” a voice asked from the driver’s seat.

Lauren stopped preening and raised a carefully plucked-by-Anastasia eyebrow at the speaker via the rearview mirror. “Should I be?” she asked Dex, her father’s seventeen-year-old intern and personal pet project who, when he wasn’t dreaming up social media schemes for her father as part of his “regular” job, was part brother, part bodyguard, and full-time chauffeur.

“Takes one to know one,” Lauren said, sticking her tongue out at him and feeling suddenly anxious. What if Dex was right? She checked the mirror again. A smoldering, gray-eyed brunette beauty glared back at her. No, there was no way. He was just being a smart-ass as usual.

“You shouldn’t care so much what people think. Seriously, it’s not attractive,” he said, as he took a sharp turn down a curve and Lauren had to clutch at the hand rest to keep from sliding down the length of the backseat.

“Um, did Dr. Phil die or something? Because ‘Dr. Dex’ has a slightly stupid ring to it,” Lauren retorted. Easy for him to say, she thought. Dex had always been popular and was criminally good-looking, even after he shaved off his pretty-boy curls to sport a Justin Timberlake buzz cut. He was smart, too—graduating early from prep school, where he had been captain of the lacrosse, crew, and soccer teams, and taking the year off before enrolling in Stanford’s accelerated computer program. Whereas Lauren had been going to Miss Gamble’s all her life, and no one ever talked to her unless it was to ask for answers to the social studies quiz.

But all that was going to change this year.

She looked out the dark-tinted car window at the familiar roller-coaster streets of San Francisco’s Pacific Heights. The exclusive neighborhood’s palatial Victorian mansions didn’t look intimidating anymore; some of them looked small, even downright dinky.

Life had taken a turn for the ultra-luxe ever since YourTV.com went public last year. The video-sharing website was her father’s brainchild, a deceptively simple idea that allowed anyone on the planet to be a star in the cyberuniverse. The site exploded suddenly and without warning, catapulting the family from their shoebox-size Mission District one-bedroom walk-up to a grand estate of their own in the Marina, with an unparalleled view of the bay and their own helipad on the roof.

Dad was the newly crowned king of Silicon Valley and had made the covers of Fortune and Forbes, and Mom had gone from protesting animal testing on the sidewalk to chairing benefit dinners for African orphans. And Lauren, who had made do with thrift-store castoffs and clearance-bin remnants all her life, suddenly found herself at designer boutiques on Maiden Lane with a personal shopper hanging on her every word.

Last year she was a financial-aid pity case, fretting over whether anyone at school would notice that her blue cashmere sweater had been bought secondhand at the school’s charity shop. This year her sweater was a nine-hundred-dollar one with a fancy Italian label. Lauren had been worried about getting a stain on it, until her dad—who used to pay the grocery bill with change from the kitchen jar whenever his graduate teaching assistant stipend ran out—had told her that she wouldn’t have to worry about anything ever again. At least not where pricey designer clothes were concerned. Well, then. Bring on the twelve-ply Mongolian cashmere.

Because Dex was right. She was a little nervous. A head-to-toe Emma Roberts–like makeover was one thing, but there were still the Ashleys to contend with. Lauren could see them now, giving her the daily head-to-toe fashion evaluation and shaking their heads in mock disgust. Even if there was a school uniform and all students were supposed to look the same to eliminate “status consciousness,” the Ashleys always looked like they stepped out of a J. Crew catalog, while Lauren looked like she’d stumbled out of a Disney Channel show. They never let her forget it, either.

Lauren clenched her jaw. What if they saw through her six-hundred-dollar haircut and carefully accessorized uniform and decided she was just the same old dork she had always been?

The old Lauren was a meek, frizzy-haired girl who sat in the back, whom no one ever paid attention to until her name was called at the end of every year during Prize Day, when the whole school gathered in the main hall, all the girls wearing ivy-covered garlands in their hair while the headmistress gave out the awards for the top student in every subject. She would stand for what seemed like an excruciatingly long time while Miss Burton read out the list of awards she’d received, in every subject except gym—mercifully, she escaped that one mortification.

What if they looked at her and saw the same Lauren from last year?

She would not allow that to happen. She dug her Black Satin manicure into the Tesla’s thick upholstery, leaving ugly grooves in the Italian leather. Uh-oh. That was going to cost a fortune to fix. Then she remembered with relief that a fortune was exactly what she had right now. And like Angelina Jolie, she was going to use her money to do something good for a change.

The car pulled up to the main gates, where a slew of the latest eco-cars were lined up, depositing their precocious charges on the sidewalk—the rosy-cheeked daughters of the most elite families in the Bay Area. Several girls who lived down the street in the multimillion-dollar townhouses Lauren had just passed were casually walking up the hill, Alexander Wang messenger bags slung across their chests.

Lauren spied the Ashleys in their usual before-school hangout by the stone bench in front of the playground, the three of them holding matching venti decaf soy lattes and looking beyond bored. They looked so sweet and innocent—not at all like the soul-destroying creatures they really were. She inhaled and said a little prayer to whatever gods watched over made-over twelve-year-olds with secret intentions.

Today was the first day of the rest of her new life.
Melissa de la Cruz

Melissa de la Cruz is the #1 bestselling author of books for readers of all ages, including the Witches of East End, Blue Bloods, and Descendants series.