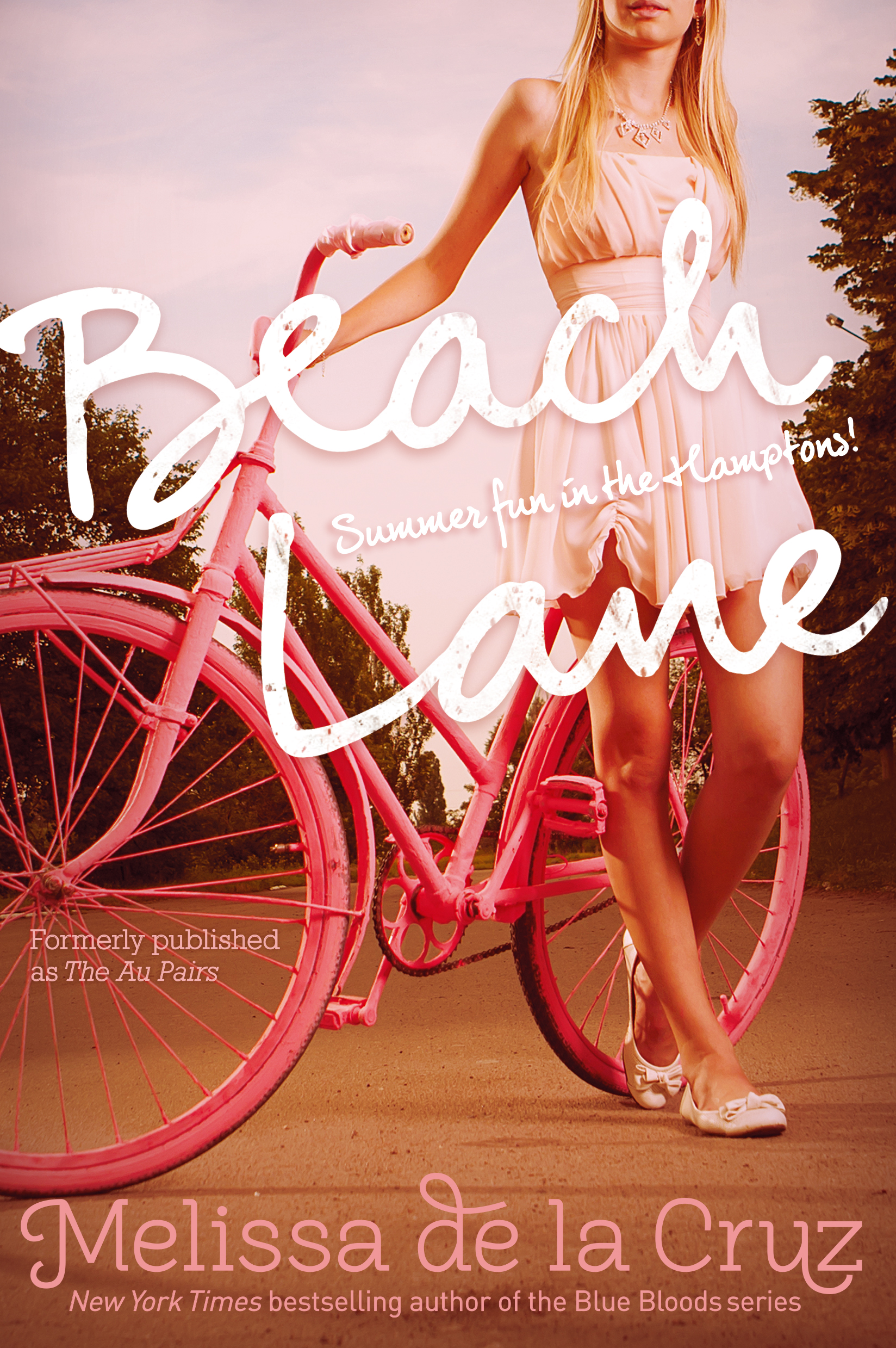 Join Mara, Eliza, and Jacqui for a sizzling summer on the beaches of the Hamptons—with no shortage of scandal—in this start to the Beach Lane series.

For Mara this job means a fast way out of small-town life. Eliza just wants to return to the posh world she wishes she never left. And for Jacqui, it’s a way back into the arms of the American boyfriend who told her he’d email as soon as he got home. And didn’t.

Besides, how bad can it be, watching a couple of kids on the beach all day? But things get complicated when romance enters the picture, along with superspoiled former friends and lost loves. Mara, Eliza, and Jacqui girls have got to stick together, or their summer will be over before it begins.

The Beach Lane series is created by Alloy Entertainment, producer of bestselling teen and middle grade series including The Sisterhood of the Traveling Pants, Gossip Girl, The Vampire Diaries, and Pretty Little Liars.

Beach Lane port authority, take one: eliza experiences public transportation
ELIZA THOMPSON HAD NEVER BEEN SO UNCOMFORTABLE in her entire life. She was sitting in the back of a Greyhound bus, sandwiched between the particularly fragrant bathroom and an overfriendly seatmate who was using Eliza’s shoulder as a headrest. The old bag in the Stars and Stripes T-shirt had little bubbles of spit forming on her lips. Eliza took a moment to pity herself. Seriously, how hard could it have been for her parents to spring for a ticket on Jet Blue?

The nightmare had begun a year ago, when some people started looking into her dad’s “accounting practices” at the bank and dug up some “misdirected funds.” Several details had been leaked—the papers had a field day with the thousand-dollar umbrella stand on his expense reports. The lawyer bills added up quickly, and soon even the maintenance on their five-bedroom, five-bath co-op was just too much.

The Thompsons sold their “cottage” in Amagansett—which was actually the size of an airplane hangar—to pay their mounting legal expenses. Next they sold their beachfront condo in Palm Beach. And then one afternoon Eliza came home from Spence, her elite all-girls private school (which counted none other than Gwynnie Paltrow as an alum), to find her maid packing her bedroom into boxes. The next thing she knew, she was living in a crappy two-bedroom in Buffalo and enrolled at Herbert Hoover High, while her parents shared a ten-year-old Honda Civic. Forget AP classes. Forget early admission to Princeton. Forget that year abroad in Paris.

Her parents had told everyone they were simply going to go recover from it all “upstate in the country,” though no one had any idea how far upstate they had really gone. To Manhattanites, there’s as big a difference between the Catskills and Buffalo as there is between Chanel Couture and Old Navy.

But thank God for rich brats. The call from Kevin Perry had come just yesterday—he was looking for a summer au pair and could Eliza make it to the Hamptons by sunset? Kevin Perry’s law firm had been instrumental in keeping her dad out of the Big House, so he was one of the only people that really knew about their situation. The au pair job was her one-way ticket out of godforsaken Buffalo; so what if she had to work for old friends of her family? At least she wouldn’t have to show up for work at the Buffalo Galleria on Monday. The girl who used to have personal shoppers at Bergdorfs had come this close to waiting on pimply classmates determined to squeeze themselves into two-sizes-too-small, cheap-ass polyester spandex. She shuddered at the thought.

The woman next to her grunted and exhaled. Eliza discreetly spritzed the air with her signature tuberose perfume to camouflage the offensive stank. She fiddled with her right earring, a diamond that was part of the pair Charlie Borshok had given her for her sixteenth birthday. Eliza wasn’t sentimental, but she still wore them despite breaking up with him more than six months ago. She’d done it in self-defense, really: how do you explain Buffalo and bankruptcy to the sole heir of a multi-million-dollar pharmaceutical fortune? She’d loved Charlie as much as she knew how, but she couldn’t bring herself to tell him or anyone else about exactly how much they’d lost. It was almost like if she said it out loud, it would make it true. So Eliza was determined to make sure no one ever found out. She didn’t know how she was going to cover it up exactly, but she was sure she’d come up with something. She always did, after all.

Take today, for example. So, fine, she was on the Manhattan-bound Greyhound, but she’d already found a way to get out of taking the Jitney to the Hamptons. She was relying on Kit to take her, just like he’d always done before. Sure, she could spend four hours in a glorified bus (and hello, the Jitney was a bus even with its exclusive name)—but why should she when Kit drove his sweet little Mercedes CLK convertible out of the city every Summer Friday just like clockwork? All she needed to do was hitch a ride. She and Kit had grown up across the hall from each other—they were practically siblings. Good old Kit. She was looking forward to seeing him again—she was looking forward to seeing everyone who was anyone again.

The bus pulled into the yawning chasm of the Port Authority and discharged its passengers under a grimy concrete slab. Eliza shouldered her Vuitton carryall (the only one her mom let her keep from her formerly extensive collection) and walked as fast as she could to get away from the awful place.

She looked around at the sprawling bus station, wrinkling her nose at the blinding fluorescent lights, the holiday rush of the crowd on their way to the 34th Street piers for the fireworks, the pockets of pasty-faced tourists holding American flags and scanning LIRR timetables. Was this how the other half lived? Pushing and pulling and running and catching trains? Ugh. She’d never had to take public transportation in her life. She’d almost missed the bus that morning before she realized it might actually have the temerity to leave without her.

Life had always waited for and waited on Eliza. She never even wore a wristwatch. Why bother? The party never started till she arrived. Eliza was dimpled, gorgeous and blond, blessed with the kind of cover girl looks that paradise resort brochures were made of. All she needed to complete the picture was a dark tan and a gold lavaliere necklace. The tan would happen—she’d hit Flying Point and slather on the Ombrelle, and, well, the lavaliere was tacky anyway.

She wandered for a while in a bit of a daze, looking for exit signs, annoyed at all the plebian commotion. A harried soccer mom with a fully loaded stroller elbowed her aside, throwing her onto a brunette girl who was standing in the middle of the station, holding a map.

“Oh, gee, I’m so sorry,” the girl said, helping Eliza back to her feet.

Eliza scowled but mumbled a reluctant, “It’s okay,” even though it hadn’t been the girl’s fault that she had fallen.

“Excuse me—do you know where the . . .?” the girl asked, but Eliza had already dashed off to the nearest exit.

On 42nd Street, horns honked in futile protest at the usual gridlock. A long, serpentine line for the few yellow cabs snaked down the block, but Eliza felt exultant. She was back in New York! Her city! She savored the smog-filled air. She hoped idly that she would make it in time. She didn’t really have a backup plan in mind. But the one thing she loved about Kit was how predictable he was.

She walked a block away from the taxi line and put two fingers in her mouth to blow an earsplitting whistle.

A cab materialized in front of her turquoise Jack Rogers flip-flops. Eliza smiled and stowed her bags in the trunk.

“Park Avenue and Sixty-third, please,” she told the driver. God, it was good to be home.
Melissa de la Cruz

Melissa de la Cruz is the #1 bestselling author of books for readers of all ages, including the Witches of East End, Blue Bloods, and Descendants series.