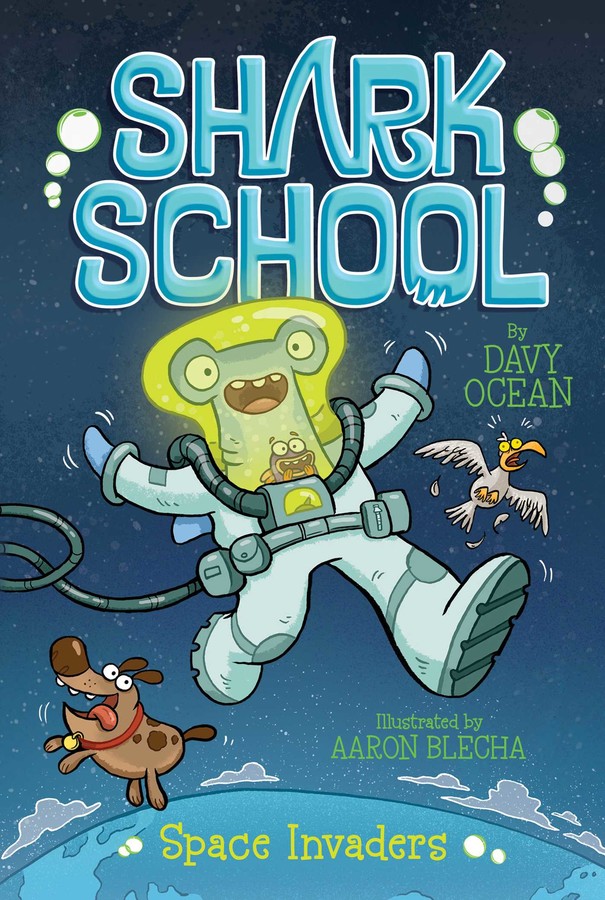 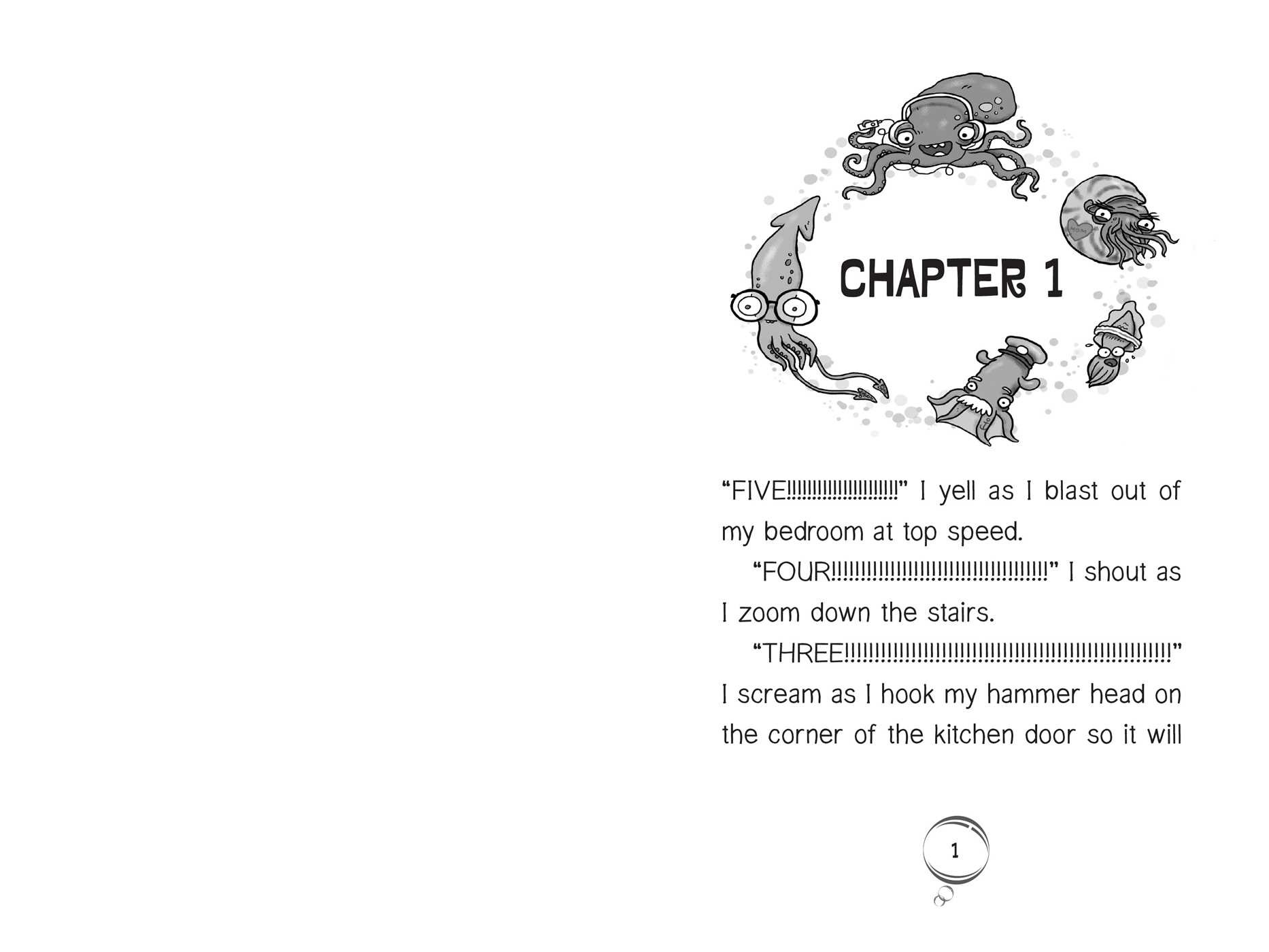 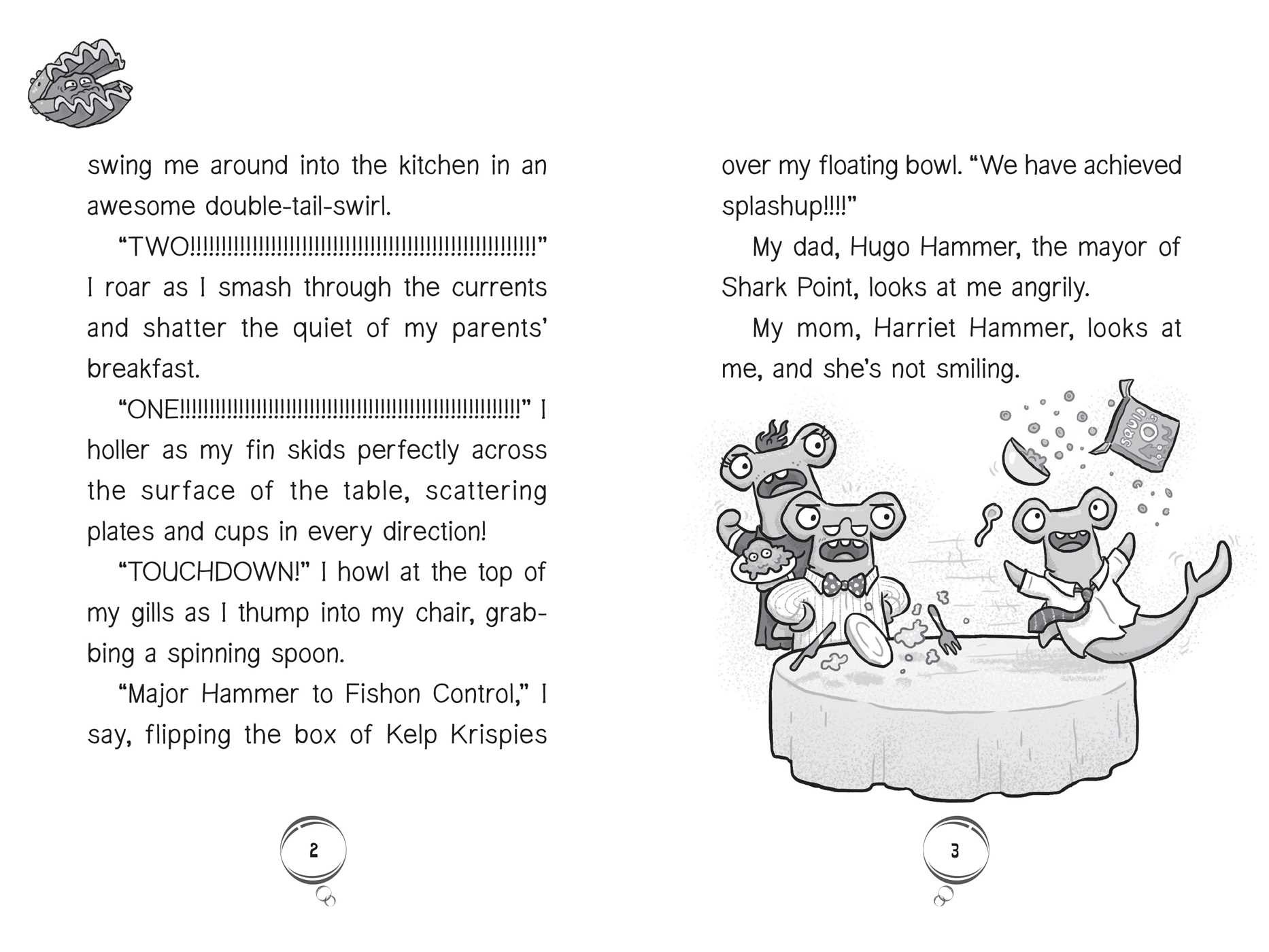 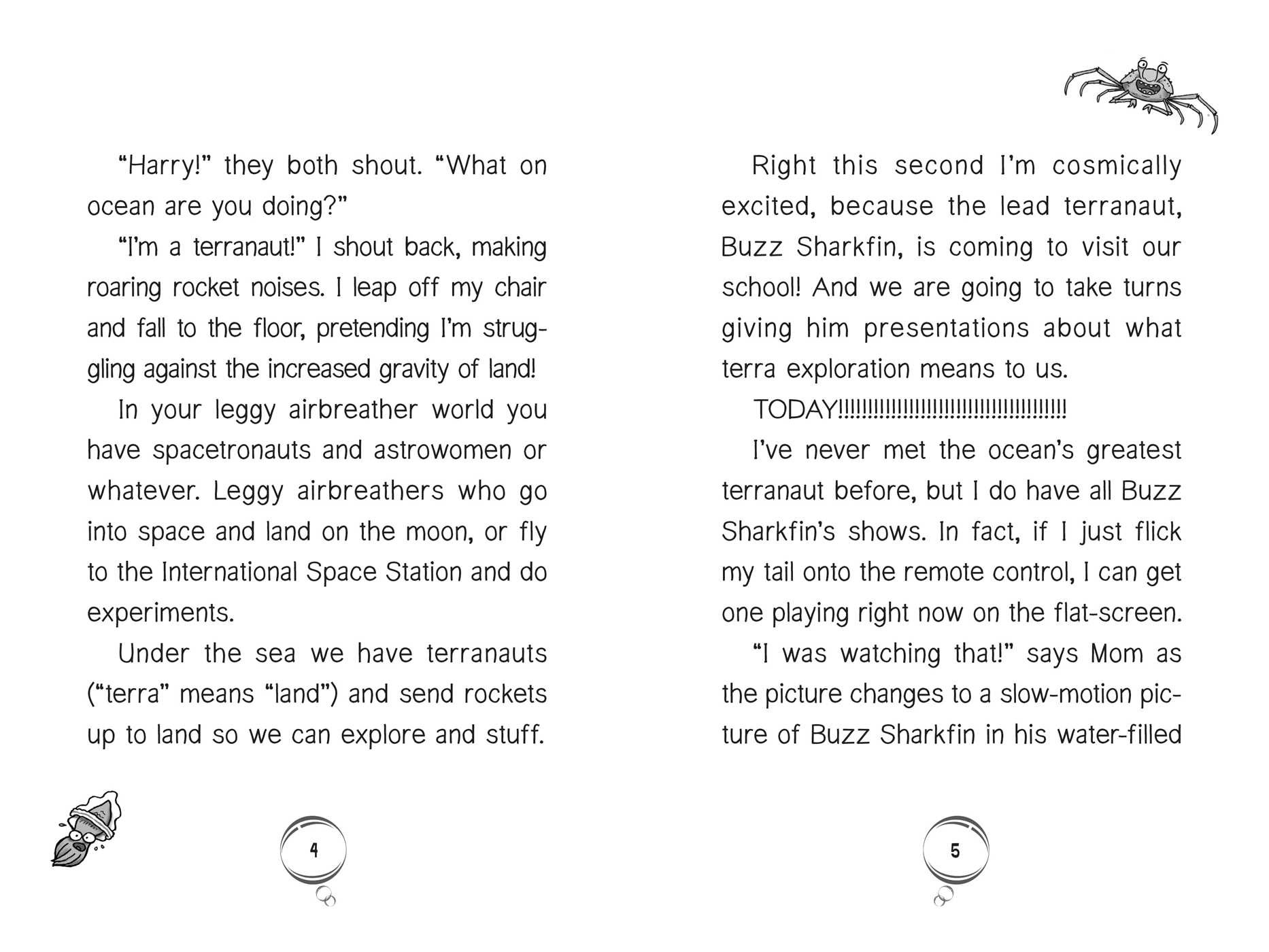 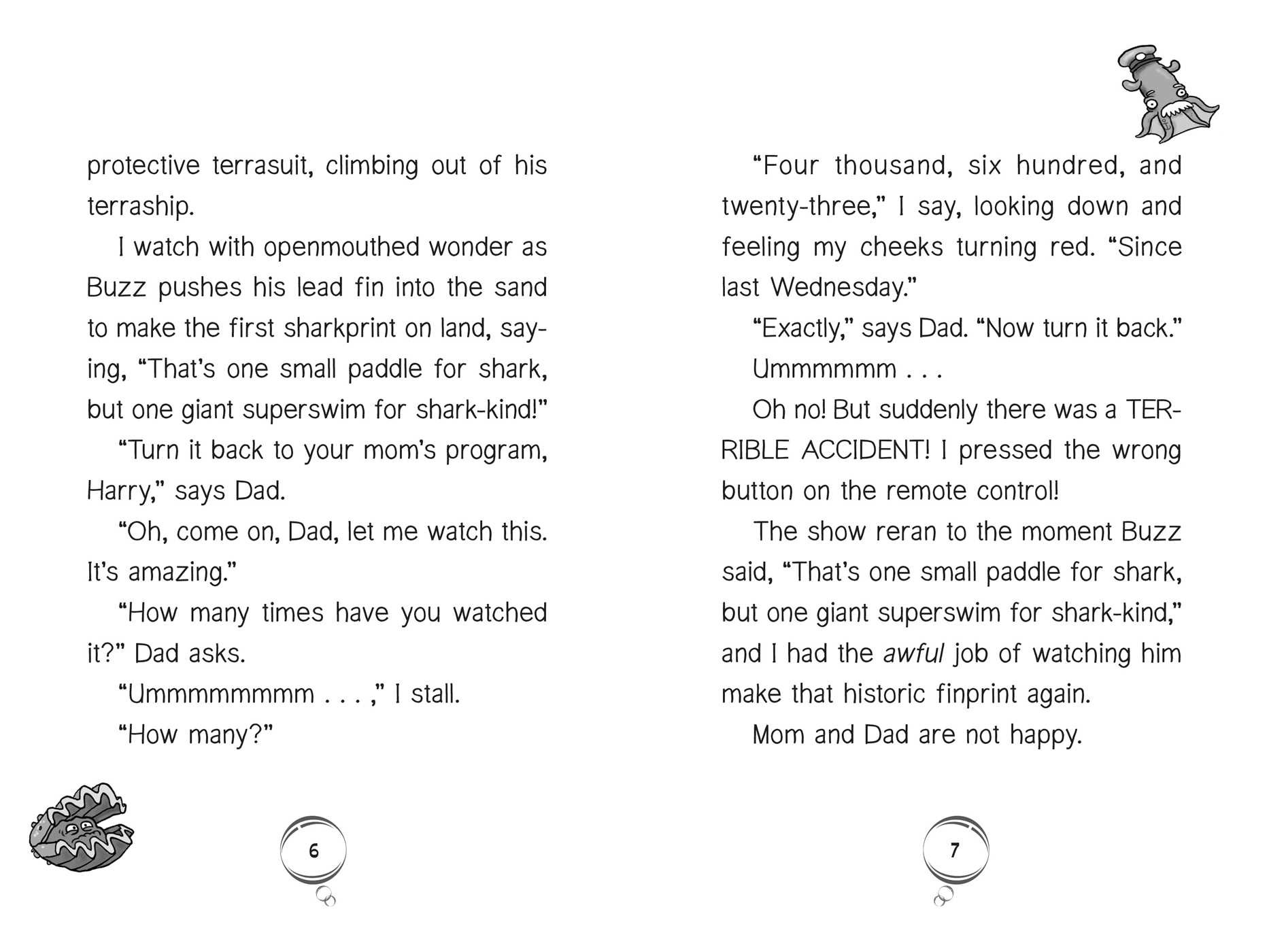 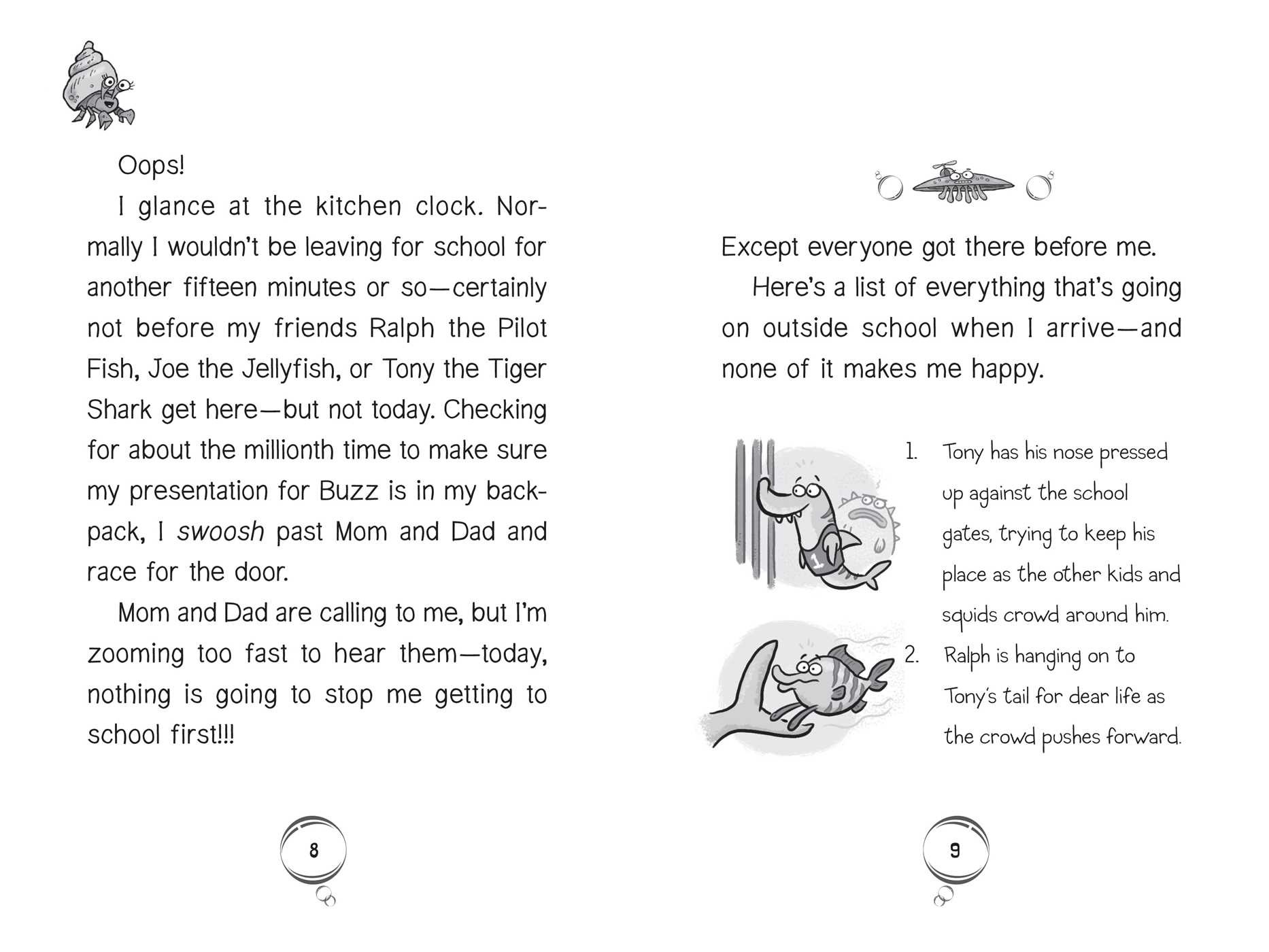 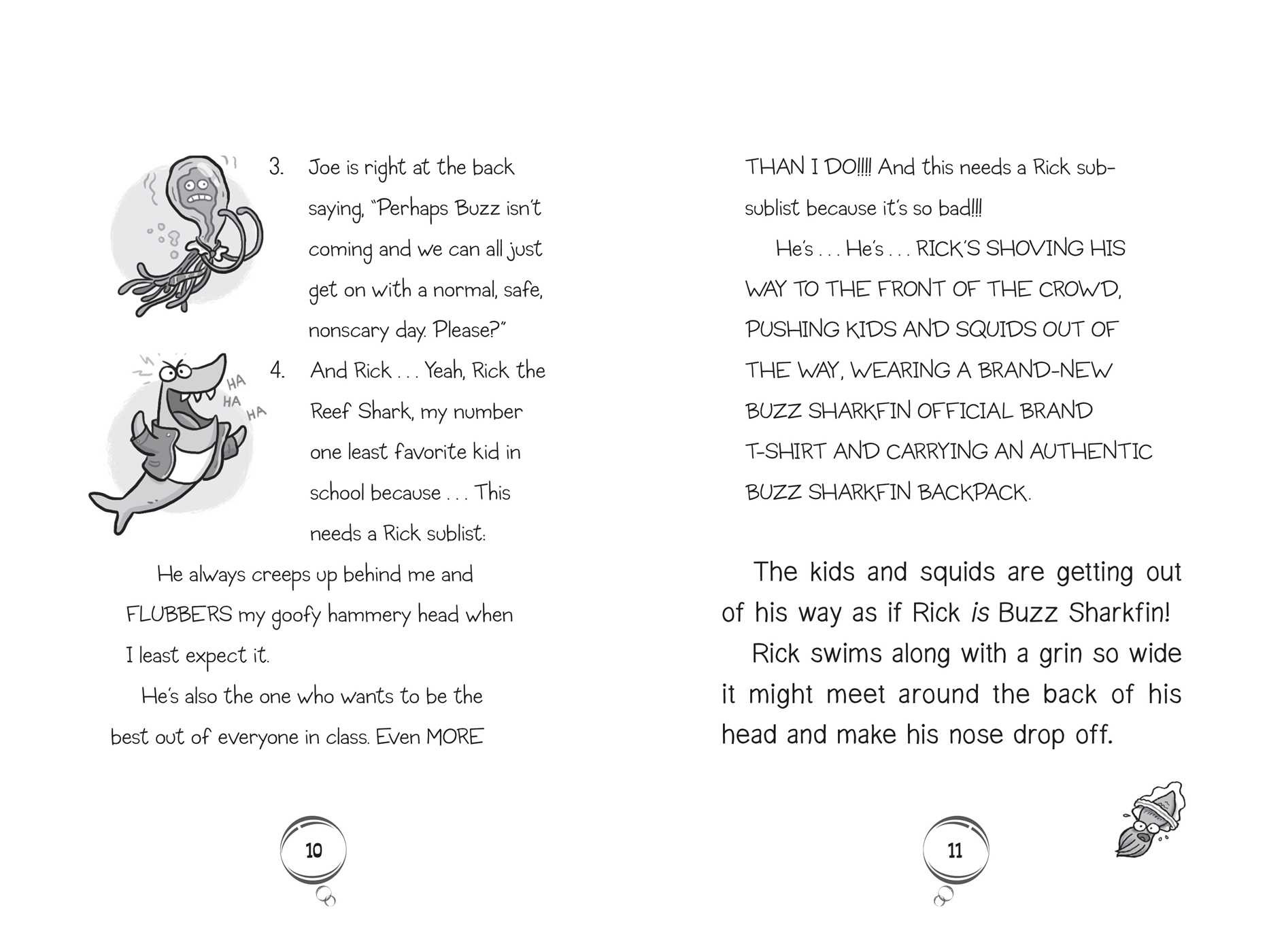 Harry Hammer and Rick Reef travel to the mysterious surface world of Earth in this final Shark School (mis)adventure.

Harry Hammer’s latest hero ‘Terranaut’ Buzz Sharkfin is planning a mission to ‘outer space,’ which to a shark is planet Earth! Harry can’t wait to be part of Buzz Sharkfin’s awesome adventure. But when his arch-rival and life-long nemesis Rick Reef, is chosen for the mission, too, it’s anything but smooth sailing. Once out of the deep blue sea, Harry and Rick discover a strange and dangerous new world with dogs and cars and humans, and they realize there’s no place like home!

“TOUCHDOWN!” I howl at the top of my gills as I thump into my chair, grabbing a spinning spoon.

“Major Hammer to Fishon Control,” I say, flipping the box of Kelp Krispies over my floating bowl. “We have achieved splashup!!!!”

My dad, Hugo Hammer, the mayor of Shark Point, looks at me angrily.

My mom, Harriet Hammer, looks at me, and she’s not smiling.

“Harry!” they both shout. “What on ocean are you doing?”

“I’m a terranaut!” I shout back, making roaring rocket noises. I leap off my chair and fall to the floor, pretending I’m struggling against the increased gravity of land!

In your leggy airbreather world you have spacetronauts and astrowomen or whatever. Leggy airbreathers who go into space and land on the moon, or fly to the International Space Station and do experiments.

Under the sea we have terranauts (“terra” means “land”) and send rockets up to land so we can explore and stuff.

Right this second I’m cosmically excited, because the lead terranaut, Buzz Sharkfin, is coming to visit our school! And we are going to take turns giving him presentations about what terra exploration means to us.

I’ve never met the ocean’s greatest terranaut before, but I do have all Buzz Sharkfin’s shows. In fact, if I just flick my tail onto the remote control, I can get one playing right now on the flat-screen.

“I was watching that!” says Mom as the picture changes to a slow-motion picture of Buzz Sharkfin in his water-filled protective terrasuit, climbing out of his terraship.

I watch with openmouthed wonder as Buzz pushes his lead fin into the sand to make the first sharkprint on land, saying, “That’s one small paddle for shark, but one giant superswim for shark-kind!”

“Turn it back to your mom’s program, Harry,” says Dad.

“How many times have you watched it?” Dad asks.

“Four thousand, six hundred, and twenty-three,” I say, looking down and feeling my cheeks turning red. “Since last Wednesday.”

Oh no! But suddenly there was a TERRIBLE ACCIDENT! I pressed the wrong button on the remote control!

The show reran to the moment Buzz said, “That’s one small paddle for shark, but one giant superswim for shark-kind,” and I had the awful job of watching him make that historic finprint again.

Mom and Dad are not happy.

I glance at the kitchen clock. Normally I wouldn’t be leaving for school for another fifteen minutes or so-certainly not before my friends Ralph the Pilot Fish, Joe the Jellyfish, or Tony the Tiger Shark get here-but not today. Checking for about the millionth time to make sure my presentation for Buzz is in my backpack, I swoosh past Mom and Dad and race for the door.

Mom and Dad are calling to me, but I’m zooming too fast to hear them-today, nothing is going to stop me getting to school first!!!

Except everyone got there before me.

Here’s a list of everything that’s going on outside school when I arrive-and none of it makes me happy.

1. Tony has his nose pressed up against the school gates, trying to keep his place as the other kids and squids crowd around him.

2. Ralph is hanging on to Tony’s tail for dear life as the crowd pushes forward.

3. Joe is right at the back saying, “Perhaps Buzz isn’t coming and we can all just get on with a normal, safe, nonscary day. Please?”

4. And Rick . . . Yeah, Rick the Reef Shark, my number one least favorite kid in school because . . . This needs a Rick sublist:

He always creeps up behind me and FLUBBERS my goofy hammery head when I least expect it.

He’s also the one who wants to be the best out of everyone in class. Even MORE THAN I DO!!!! And this needs a Rick sub-sublist because it’s so bad!!!

He’s . . . He’s . . . RICK’S SHOVING HIS WAY TO THE FRONT OF THE CROWD, PUSHING KIDS AND SQUIDS OUT OF THE WAY, WEARING A BRAND-NEW BUZZ SHARKFIN OFFICIAL BRAND T-SHIRT AND CARRYING AN AUTHENTIC BUZZ SHARKFIN BACKPACK.

The kids and squids are getting out of his way as if Rick is Buzz Sharkfin!

Rick swims along with a grin so wide it might meet around the back of his head and make his nose drop off.

“Everyone move back please! I need to open the gates!” announces Mrs. Shelby, our teacher. She’s waving her flipper around and pushing the hard edge of her turtle shell against the gates so they can swing open.

The crowd swims backward in the water, leaving Rick alone there like the gates had opened just for him!

Rick does a tail-endy and a half-barrel into a bow, then shouts, “Hey, Rubberhead!” at me.

A massive green shellicopter descends from the waves above-its blades spinning wildly and its engines roaring like a hundred storms.

Rick is caught in the swirling wake, picked up and sent flying off into the water, up and up, and away over the school!

By the time the shellicopter lands, the door opens and the ocean’s greatest terranaut climbs out, and Rick, I’m glad to report, is nowhere in sight!
Davy Ocean

Davy Ocean is the pseudonym of a collective of writers from the creative agency Hothouse Fiction, based in London.