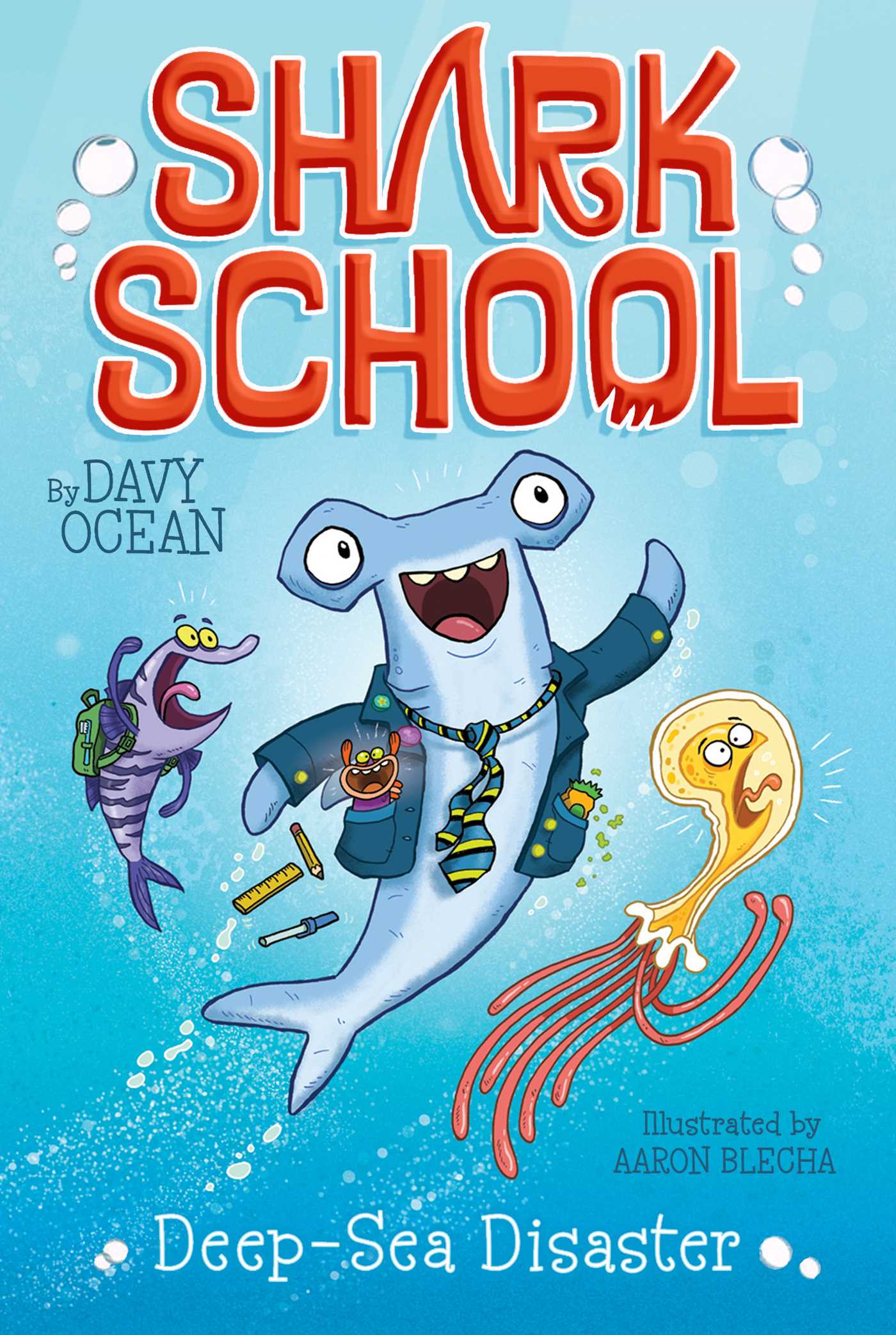 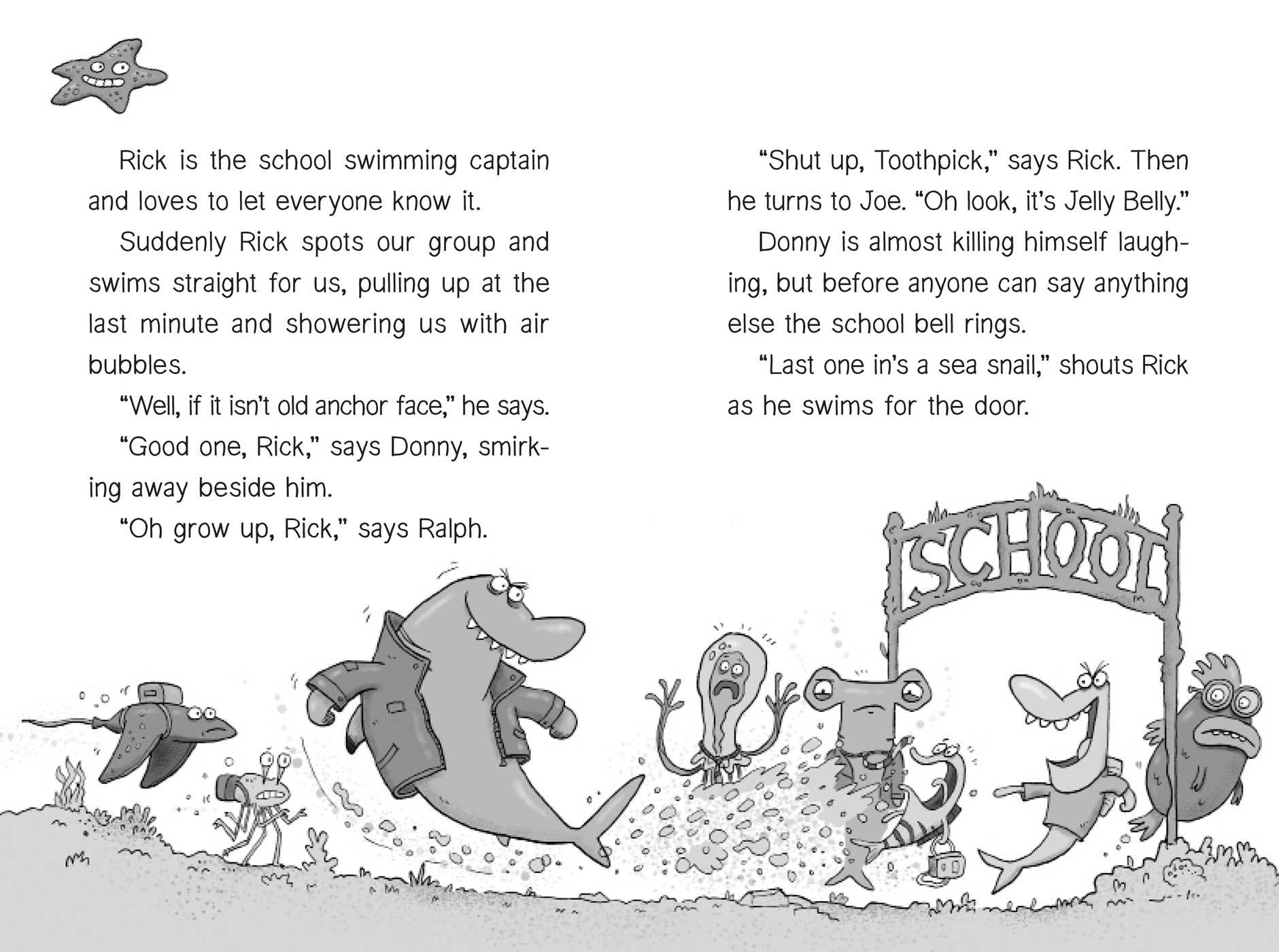 Dive into the world of Harry Hammer, a hammerhead shark with a penchant for (mis)adventure in this fin-tastic start to a chapter book series.

Harry Hammer is a hammerhead shark, although he’d rather be a great white shark, or a tiger shark—anything but himself. But when a class trip to a famous shipwreck almost ends in disaster for Harry and his pals, he realizes the importance of being exactly who he is!


I’m having my favorite dream again—the one where I’m about to be crowned Greatest Underwater Wrestling Champion of the World, Ever. I swim up to the top rope of the ring and prepare to launch.

“I think he’s going for a dropflick!” a jellyfish commentator shouts into his microphone.

One diving dropflick and the blue shark I’m fighting will be fish food and the underwater wrestling belt will be mine. I dive down from the rope and pin my opponent to the canvas.

“Har-ry! Har-ry!” The crowd’s voices get louder and louder. And louder. And then too loud. Like they are shouting right in my ear.

I open my left eye and swivel it around. The wrestling ring disappears and I am in my bedroom. Next to my bed. And Humphrey, my humming-fish alarm clock, is pinned to the floor under me.

“All right, all right,” I mutter, swimming back into bed. “Why did you have to wake me up? I was having a really cool dream.”

“Don’t tell me, the one about the wrestling match?” Humphrey says grumpily.

“I hate that dream.”

“I always end up getting hurt.”

I open my right eye and glare at him. “Only because you try to wake me up.”

Humphrey starts swimming around in circles above my head. “It’s my job to wake you up-I’m your alarm clock, and you’ve got school.”

I groan. From almost being crowned Underwater Wrestling Champion of the World to having to get ready for school, in less than ten seconds.

Humphrey swims off out the window to go and get his breakfast.

I swivel my right eye around until I can see the huge poster of Gregor the Gnasher hanging on the rocky wall at the end of my bed. Gregor the Gnasher is the actual Underwater Wrestling Champion of the World. In the poster, he’s holding his winner’s belt high above his head and smiling so widely you can see all of his 3,017 teeth.

Gregor is a great white shark and as well as his rows and rows of razor-sharp teeth, he has a long pointed snout and a humongous body. He’s exactly what a shark should look like. And he’s scary. Super scary. Even my poster of him makes my pet catfish poop itself.

If they made a poster of me, my catfish would probably just laugh. You see, I’m a hammerhead shark, which, for those of you who haven’t already figured it out, means I have a head that’s the shape of a hammer. With goggly eyes so far apart they look like they don’t even talk to each other. It’s not a great look. Especially if you want to be taken seriously in the shark world.

2. The blue shark– the fastest fish in the sea.

3. The tiger shark–scary and stripy.

4. The whale shark–its mouth is so huge it can swallow a dolphin in one gulp!

5. The bull shark–it can swim in rivers as well as the sea, which is very handy if you’re going on vacation and stuff.

Gregor doesn’t just look cool, he can do lots of cool stuff too. Then I have an idea. I might not look like Gregor, but that doesn’t mean I can’t be like him. I swim out of bed and over to the old treasure chest where I keep my collection of shells shaped like famous sports stars and all my lists. I once made a list of all the cool stuff Gregor can do. I take it out and study it.

Number one is out, obviously.

2. Eating boats–which scares the life out of the leggy air-breathers.

4. Swimming fast–as fast as any speedboat.

You can’t just be Underwater Wrestling Champion of the World in, like, two weeks or something. It takes years of deep-sea training: weight-lifting anchors, eating high-energy seaweed bars, and swimming laps around ocean liners.

Number two is a no-no as well. First of all, my mouth is way too small. Sometimes I find it hard swallowing a crab. Also, I’m not allowed up to the surface without one of my parents being with me. I know that sounds really lame-I mean, I’m ten years old. What do they think I’m going to do? Go sunbathing on the beach?

And I’m not going to eat any strange food dangling from fishing lines either. Everyone knows what fishermen do to sharks when they catch them. They make their fins into soup, that’s what. And there’s no way I’d risk losing my fins. Imagine what a laughingstock I’d be then, with a head like a hammer and a body like an eel!

I put on my school tie and blazer and then read number three on my list: Looking really mean. Hmm, now that sounds a bit easier. And if I looked really mean, certain sharks might not make fun of me anymore. I swim over to my mirror and scrunch my eyes shut. Then I make my meanest face. I imagine I’m giving the sort of scary scowl that Gregor makes when he’s entering the wrestling ring. It feels pretty good. I can already imagine Rick Reef and his goofy sidekick, Donny Dogfish, taking one look at the new me and speeding off to hide behind the school cafeteria.

But when I open my eyes and look in the mirror, I don’t see the mean monster of my dreams-and Rick Reef’s nightmares-I see a schoolkid who looks like he’s having trouble making a poop!

I swim back to the list, feeling a bit worried. I’m starting to run out of options. Okay, number four: Swimming fast. I’m not bad at this, actually, but I’m not clueless-I’m never going to be as fast as Gregor. I look at number five: Ambushing prey. Aha-now, surely I can do that. I mean, how hard can it be? I scan my bedroom, looking for a victim. My eyes come to rest upon Lenny, my lantern fish, snoozing away above my desk, his antennae glowing softly in the dark. Being careful not to make a sound, I start to glide through the water, Gregor’s scary theme song playing in my head.

But just as I get to the desk, disaster strikes. My tail gets caught in a strand from my seaweed blanket. I try to tug it free but end up getting even more tangled. I pull as hard as I can. The balled-up blanket sails through the water, hits the shelf above my bed, and sends my finball trophy flying.

“Eh? Uh! Wass going on?” Lenny says sleepily as I try to untangle myself from the seaweed.

Hmm, not exactly the kind of surprise attack I’d been planning. But the problem is, my room’s way too small. You can’t really sneak up on something when it’s really close to begin with. You need a little distance from the target to be able to plan your attack. I decide to investigate the rest of the house to see what I can find.

But as I swim through my bedroom door, I hear a really horrible noise. It’s like a crab grinding glass with its pincers. Or a ship’s foghorn that has a seagull stuck inside it. It can only be one thing-my mom, singing while she makes breakfast. I start to grin. When Mom is singing, she goes off into her own little world and doesn’t notice a thing. She will make the perfect target. Let the ambushing begin!

While Mom keeps screeching like a harpooned mermaid, I get to the kitchen door without being seen. Then I poke one side of my hammerhead through the door and swivel my eye around, trying to spot my prey. There she is, at the far end of the kitchen, putting breakfast things on a tray, still singing away. Now that I’m closer I can actually make out some of the words in between the screeches:

I get myself ready to pounce. This must be how Gregor feels before a fight, I think as my heart starts to pound.

I hear my unsuspecting prey swimming for the door, her apron strings swishing in the water behind her. Closer and closer she comes.

“Made of iron, shiny and fine,” she wails.

I tense my muscles. Closer she comes. I arch my back. And closer. I get ready to pounce. Closer. NOW!

Davy Ocean is the pseudonym of a collective of writers from the creative agency Hothouse Fiction, based in London.