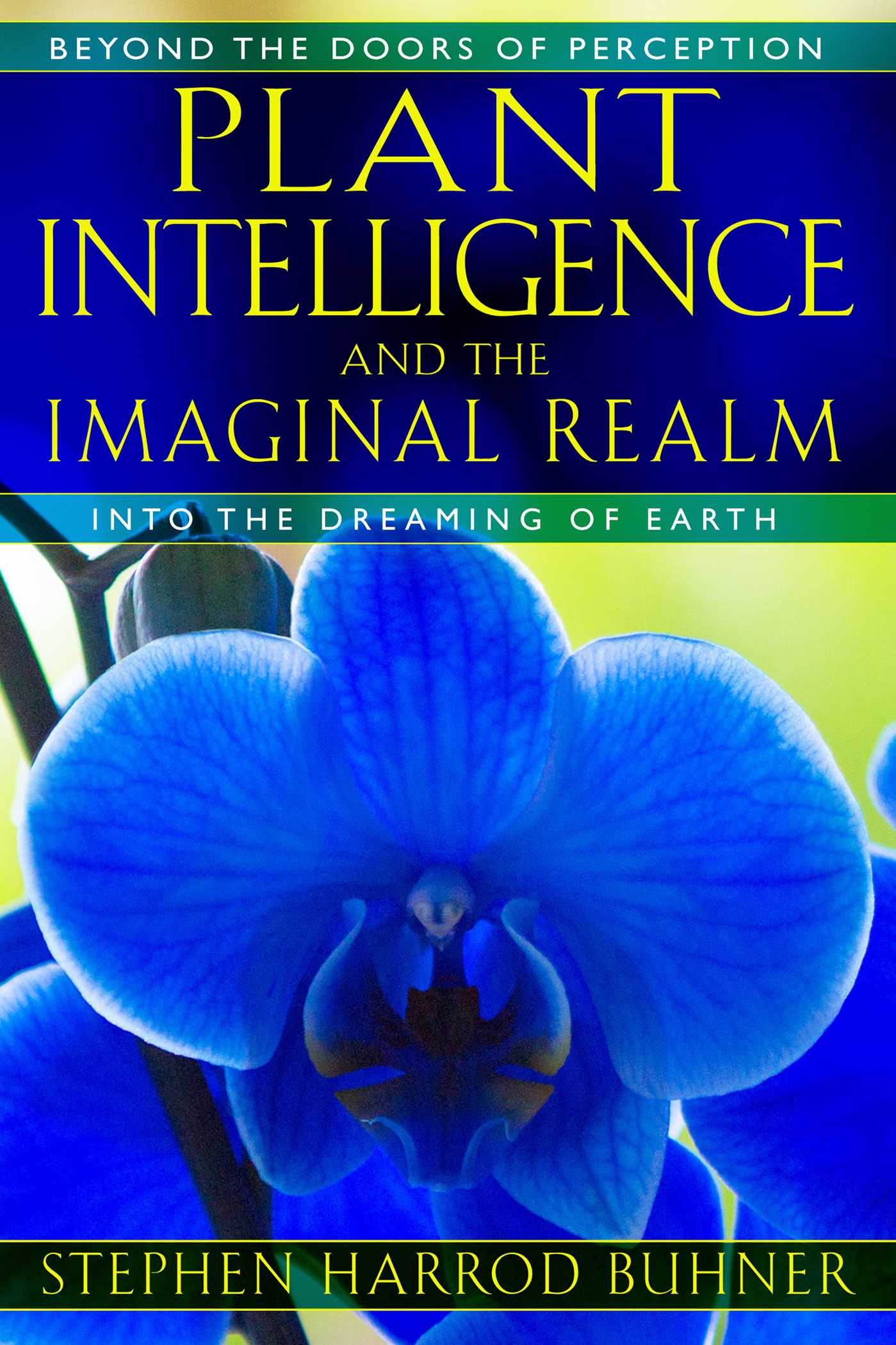 • Provides exercises to directly perceive and interact with the complex, living, self-organizing being that is Gaia

• Examines the ecological function of invasive plants, bacterial resistance to antibiotics, psychotropic plants and fungi, and the human species

In Plant Intelligence and the Imaginal Realm, Stephen Harrod Buhner reveals that all life forms on Earth possess intelligence, language, a sense of I and not I, and the capacity to dream. He shows that by consciously opening the doors of perception, we can reconnect with the living intelligences in Nature as kindred beings, become again wild scientists, nondomesticated explorers of a Gaian world just as Goethe, Barbara McClintock, James Lovelock, and others have done. For as Einstein commented, “We cannot solve the problems facing us by using the same kind of thinking that created them.”

Buhner explains how to use analogical thinking and imaginal perception to directly experience the inherent meanings that flow through the world, that are expressed from each living form that surrounds us, and to directly initiate communication in return. He delves deeply into the ecological function of invasive plants, bacterial resistance to antibiotics, psychotropic plants and fungi, and, most importantly, the human species itself. He shows that human beings are not a plague on the planet, they have a specific ecological function as important to Gaia as that of plants and bacteria.

Buhner shows that the capacity for depth connection and meaning-filled communication with the living world is inherent in every human being. It is as natural as breathing, as the beating of our own hearts, as our own desire for intimacy and love. We can change how we think and in so doing begin to address the difficulties of our times.

Prelude
The Soft Flutter of Butterflies

I never was a good student in school--though first grade was fun. We made handprints in wet plaster and walked in the woods looking for butterflies and learned the Spanish words for chocolate and hello.

That first summer after school was wonderful. I got bright new shoes and ran and played with my friends and we flew kites whose tails fluttered in the wind and the days were as long as forever. But next year, school was different.

Our teacher stood ramrod stiff at the head of the class and she was tall and thin and the mole on her chin quivered with indignation. Her face disapproved of itself and she wrinkled her nose when she talked as if she were smelling something polite people didn’t mention. . . .

I didn’t like her very much and I began to think that school was something I would rather not do.

But when I told my mother I was informed that I didn’t have a choice in the matter and that school was good for little children and that go I would. So, the years went by, as years do, and some teachers were better and some were not and I became as unconscious as unconscious could be.

I went to university and the teacher in my first class looked like Santa Claus. . . . He told us his name was Ben Sweet (Sweet by birth, sweet by disposition) and the name of his class was “On the challenge of being human.” My other teachers did not seem to care about the challenge of being human and instead they taught us to think about mathematics and analyze different chemicals, and as the months went by I felt farther from myself. And the only thing that seemed to make sense was Ben Sweet and the way he talked to us and urged something in the deeps of us to come out. . . .

And one day, I found myself thinking that I wanted all my teachers to be like that. . . . So, I made a list of every person I had heard of that had moved me in the way Ben Sweet did and I decided I wanted to meet and learn from every one of them. . . .

I was so young then and the world was so new and my whole life was before me.

Elisabeth Kübler-Ross was plain and tall and thin. . . . Her eyes penetrated everything they touched and they were the deepest blue and looking into them was like peering into some deep mountain pool that’s so clear you can’t tell how deep it is. Down in those deeps were things I couldn’t quite make out, things I didn’t understand . . . I could feel whatever it was deep inside, touching parts of me that I did not know I possessed. And those parts of me . . . I could feel them begin to stir under its touch.

“How did you come to your work?” someone asked.

“I was a young doctor and it was just after the war. I had heard stories of the terrible things that had happened in the concentration camps and I wanted to see for myself. So, I went to Majdanek in Poland. . . .

“By the gates there was a table and a young woman with dark, raven hair. She had to ask me several times for my name. She carefully wrote it down in the book where they kept a list of all the visitors. Then she looked up and smiled a sad, quiet smile, and waved me in. . . .

“Soon, I found myself in front of a wooden barracks. . . . I walked down the long passageways that ran between the tiers of bunks, looking around me. Then I saw--on the walls, roughly scratched, sometimes carved, into the wooden planks--hundreds of initials, and names--the last desperate messages to the living. And among those messages--I couldn’t believe it--were hundreds and hundreds of butterflies. Butterflies, everywhere. In the midst of that horror, the children had scratched butterflies into the walls!”

. . . Elisabeth looked at all of us in the room. None of us were moving. We were still, hardly breathing, caught spellbound. “I had never experienced such cruelty,” Elisabeth said, “and my heart was being crushed. But the young woman seemed oddly unaffected by it, so I said to her, ‘But you look so peaceful. How can you be peaceful when your whole family was killed here?’

“Golda looked back at me--those peaceful eyes!--and said in the most penetrating voice I had ever heard, ‘Because the Nazis taught me this: There is a Hitler inside each of us and if we do not heal the Hitler inside of ourselves, then the violence, it will never stop.’”

. . . There was something in Elisabeth’s voice that day, some invisible thing that my younger self did not consciously understand but could only feel. And it went into the depths of me and there it remains still. . . .

There is a difference I learned, long ago, between schooling and education. Do you feel it now, in the room with you?

I was never able to find it in any of my schools. But sometimes I find it in the soft flutter of butterflies, in the wildness of plants growing undomesticated in a forest clearing, in the laughter and running of young children, their hair flowing in the wind, and sometimes, sometimes I find it in the words of teachers who come among us from time to time--out there, far outside these walls, in the wildness of the world.
Stephen Harrod Buhner

“This is a rare and splendid book that takes you right into the heart and soul of the world. Read it and be transformed.”

“The twentieth century was the great age of physics, and the twenty-first is the age of biology. According to Stephen Harrod Buhner, we must interact empathically with the biosphere by opening our perceptual gates to perceive through all body sensations. He deliciously explores music, writing, art, and plants as tools for reclaiming our feeling sense of nature. Plant Intelligence and the Imaginal Realm is a work of heartfelt wisdom written so exquisitely that it took my breath away, a must read for anyone who wants to achieve keystone intelligence--empathic immersion within Earth’s dreaming.”

“Stephen Harrod Buhner’s The Lost Language of Plants and The Secret Teaching of Plants taught a generation of herbalists to trust our sense that the world was alive and speaking to us. Plant Intelligence and the Imaginal Realm takes us further down that path of remembering and re-enchantment, awakening our capacity to tap directly in to the Gaian mind. Be warned: if you read this book, you will never be the same again.”

“There is much magic, and a wealth of wisdom in this book. It is a wisdom that anyone can come, not only to understand, but to live within. To take this journey is to embrace a great healing, and to release a great burden. The healing answers your deepest longing, I won't say what the burden is, but you will know it when you let it go.”