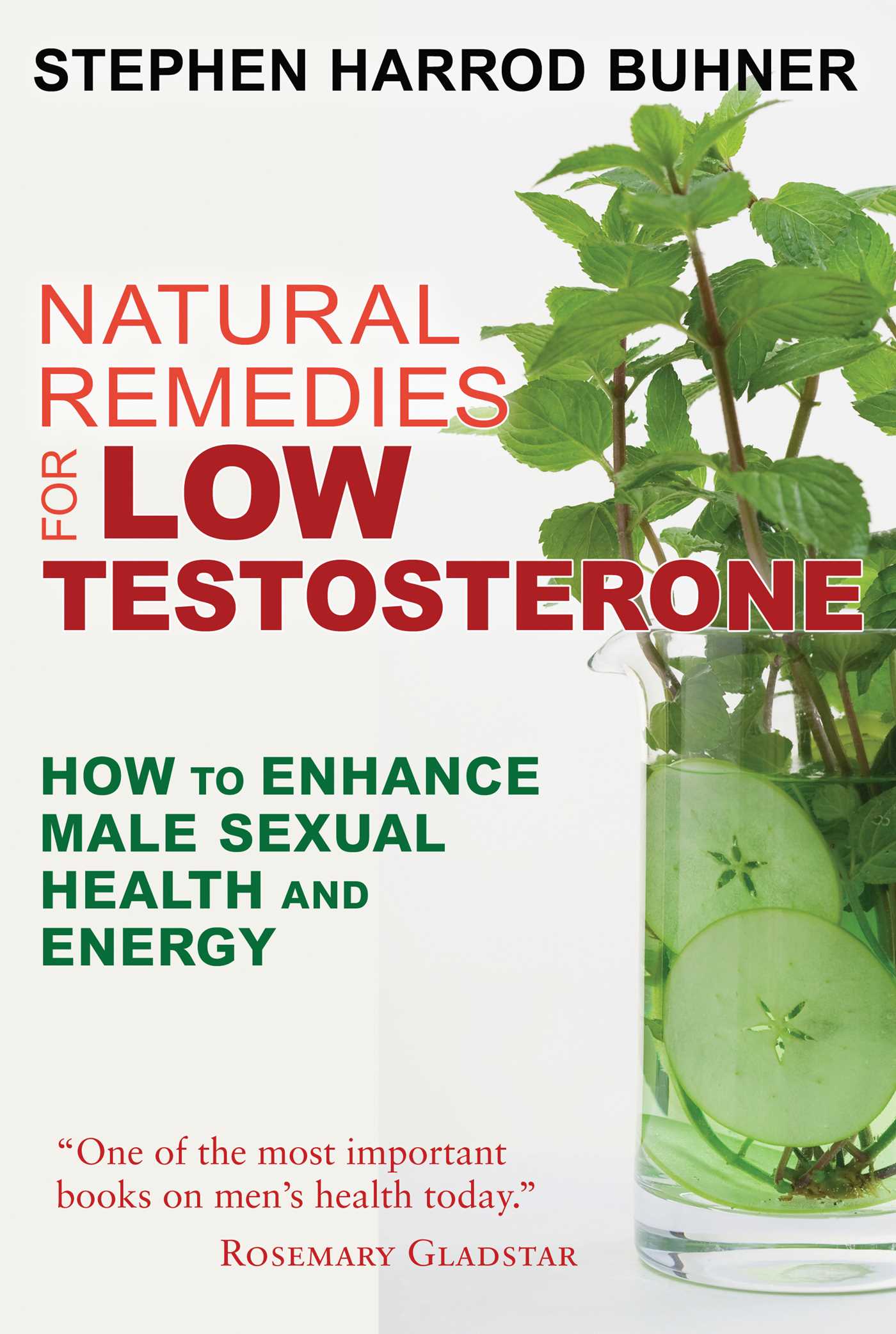 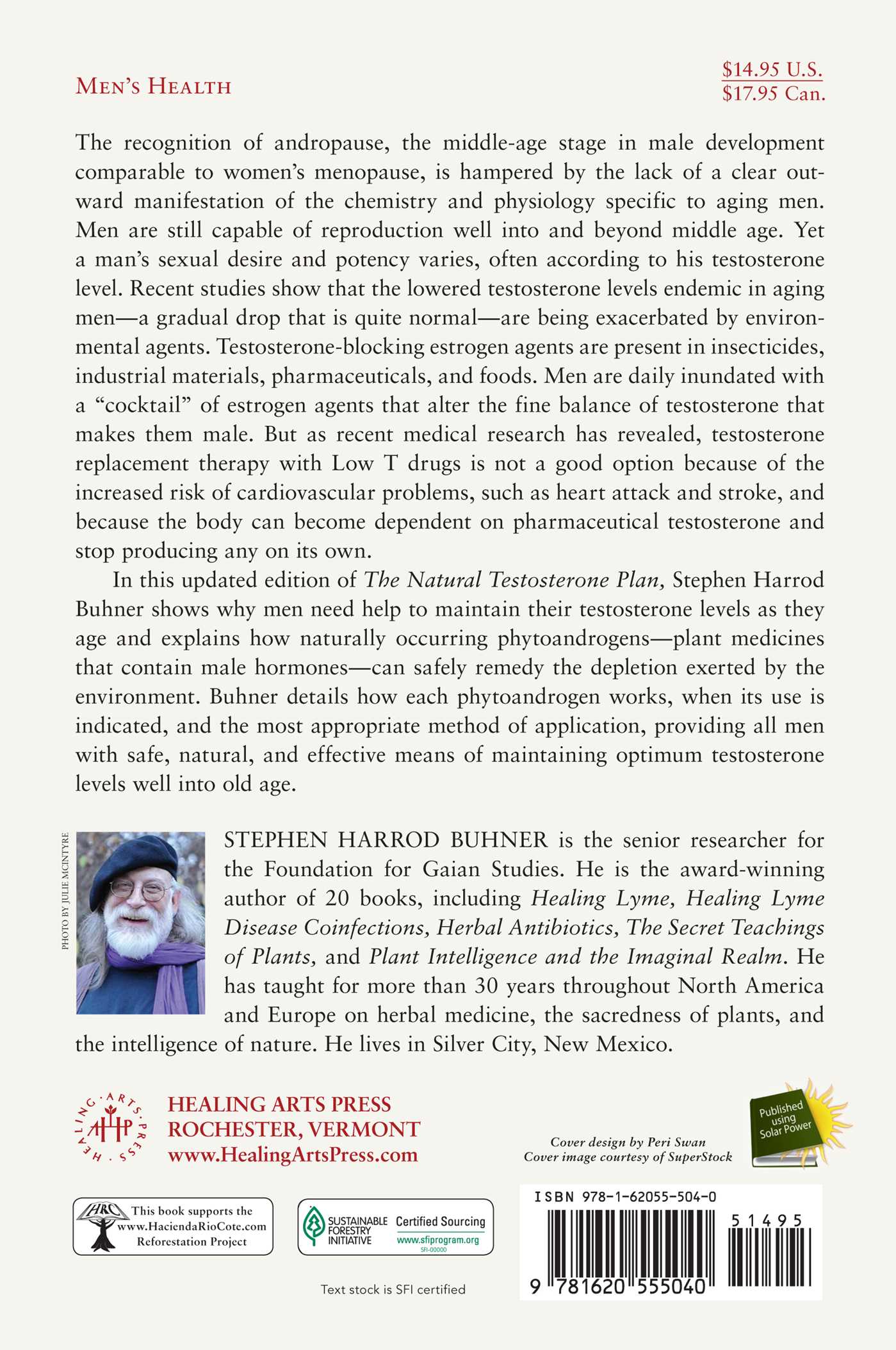 How to maintain optimum testosterone levels for the male body through the use of herbs, nutritional supplements, and diet

• Contains the most up-to-date natural treatments for impotence, infertility, and prostate disease

The recognition of andropause, the middle-age stage in male development comparable to women’s menopause, is hampered by the lack of a clear outward manifestation of the chemistry and physiology specific to aging men. Men are still capable of reproduction well into and beyond middle age. Yet a man’s sexual desire and potency varies, often according to his testosterone level. Recent studies show that the lowered testosterone levels endemic in aging men--a gradual drop that is quite normal--are being exacerbated by environmental agents. Testosterone-blocking estrogen agents are present in insecticides, industrial materials, pharmaceuticals, and foods. Men are daily inundated with a “cocktail” of estrogen agents that alter the fine balance of testosterone that makes them male. But as recent medical research has revealed, testosterone replacement therapy with Low T drugs is not a good option because of the increased risk of cardiovascular problems, such as heart attack and stroke, and because the body can become dependent on pharmaceutical testosterone and stop producing any on its own.

In this updated edition of The Natural Testosterone Plan, Stephen Harrod Buhner shows why men need help to maintain their testosterone levels as they age and explains how naturally occurring phytoandrogens--plant medicines that contain male hormones--can safely remedy the depletion exerted by the environment. Buhner details how each phytoandrogen works, when its use is indicated, and the most appropriate method of application, providing all men with safe, natural, and effective means of maintaining optimum testosterone levels well into old age.

The Importance of Natural Hormone Support for Men

Most of us can remember our shift into adolescence: our bodies were changing radically, preparing us for reproduction and independence. At the same time, just as significantly, our minds and spirits were shifting--preparing us for life as adults, for love and families of our own, for careers, and for our individual and unique destinies.

These shifts had tremendous physical and emotional impacts as we moved into adolescence. Our bodies changed shape, our skin altered, we began growing hair in places it had not grown before, our voices deepened. In short, our entire appearance changed. And just as impactful, how the world saw us changed. We had to get used to a new “image,” a new “face.” The person we saw when we looked in mirrors, those at home and those in people’s eyes, had changed. The young boy we were was gone, a new someone had come to take his place.

This new way of being--the adolescent physical, emotional, and spiritual processes that came into being as we moved out of childhood--has a certain life span, a certain arc, a period of growth, development, maturity, and then senescence or ending. A transition process, in many ways similar to adolescence, occurs again when we enter the middle of life. We look in the mirror and notice that someone new is taking the place of that young man we once were. And then, one day, we mildly flirt with a young woman, much as we have always done since our movement into adolescence, and instead of the usual response, one we had become used to over long years of social interaction, the response we get is different. Her eyes respond with, “You’re old enough to be my father.” And in that moment the changes that have begun catch up with us. We, whether we want to or not, enter middle age.

Historically, many cultures have understood this transition much better than we now do. Middle age was recognized for its importance as were the tasks that lay before the newly awakening middle-aged man. James Hillman, a Jungian analyst exploring the territory of middle and old age and its importance, makes a deeply insightful point in his book The Force of Character and the Lasting Life:

The transition [to middle age] is first of all psychological, and to me it means this: It is not we who are leaving, but a set of attitudes and interpretations regarding the body and the mind that have outlasted their usefulness--and their youthfulness. We are being forced to leave them behind. They can no longer sustain us, not because we are old, but because they are old.

Middle age and old age are not simply the wearing out of the body but the movement into new territories of self, into new tasks as human beings. Emotionally, we are in fact coming to terms with our youth, thinking it over. The dreams of who we would be, made during adolescence, are pulled out of the cupboard, dusted off, and examined. We compare them to what we have actually done. Then we look over who we are and what we want to do now. We enter new territories of self that must be encountered, explored, experimented with in order for them to be fully realized, for this new way of being to be integrated and whole. And, of necessity, we must grieve the loss of that young man with whom we have lived so long.

This would be challenging enough were it the only thing to be dealt with but there is another factor that makes it harder still, a factor that interferes with the successful transition into a healthy, vital middle age: the pervasiveness of chemicals throughout the ecosystem that mimic the actions of estrogens (female hormones). The powerful and historically unique presence of these chemistries in our ecosystems and in our bodies cannot be overstated.

During our shift into middle age our body chemistry begins to change. Testosterone and other androgen (male hormone) levels start to shift in important ways. Our bodies broaden, our ears grow bigger and longer, hair, once again, begins to appear in unusual places (and disappear in others). These are normal changes. They and many others are elements of our shift into another kind of maleness. But something is interfering with this natural shift of our bodies. Endocrine researchers now realize that environmental estrogenic pollutants and substances are entering our bodies in tremendous quantities, shifting our hormonal balance toward the estrogen side of the equation. Like women, we do have estrogens in our bodies (just as they have testosterone), we just don’t have the same quantities, and we have a great deal more testosterone than they do. What is most important is the ratio of androgens to estrogens. Anything that upsets that balance changes who and what we become. We are not our chemistry, but we certainly are affected by our chemistry.

Unfortunately, industrial substances, in the millions of tons, are exacerbating the movement into middle age that men naturally experience. Researchers have found that some of these substances cause more testosterone to be converted to estradiol, others actually interfere with the production of testosterone, and still others are potent estrogens that, as they are taken into our bodies, seriously disrupt the androgen/estrogen balance. For many of us androgen levels are so profoundly affected that sexual vitality and quality of life are significantly reduced.

It is possible to reverse this process by regularly supplementing the diet with plants high in androgens, natural steroidal supplements and vitamins, and androgen-stimulating foods. Incorporating these as a regular part of your diet for two weeks to one year can enhance free testosterone levels and positively alter the androgen/estrogen ratio. This book will look at the most important plants, supplements, and foods that can be used to increase testosterone levels and alter the androgen/estrogen balance toward the androgen side of the equation.

“Stephen Buhner combines scientific research, traditional knowledge, and personal experience into what may be one of the most important books available on men’s health today. He primarily explores the little-known territory of men’s hormonal changes during midlife--a transition in men’s life that has unfortunately been largely ignored, often denied by modern medicine--and offers simple sensible solutions to help men navigate this important cycle of their lives.”