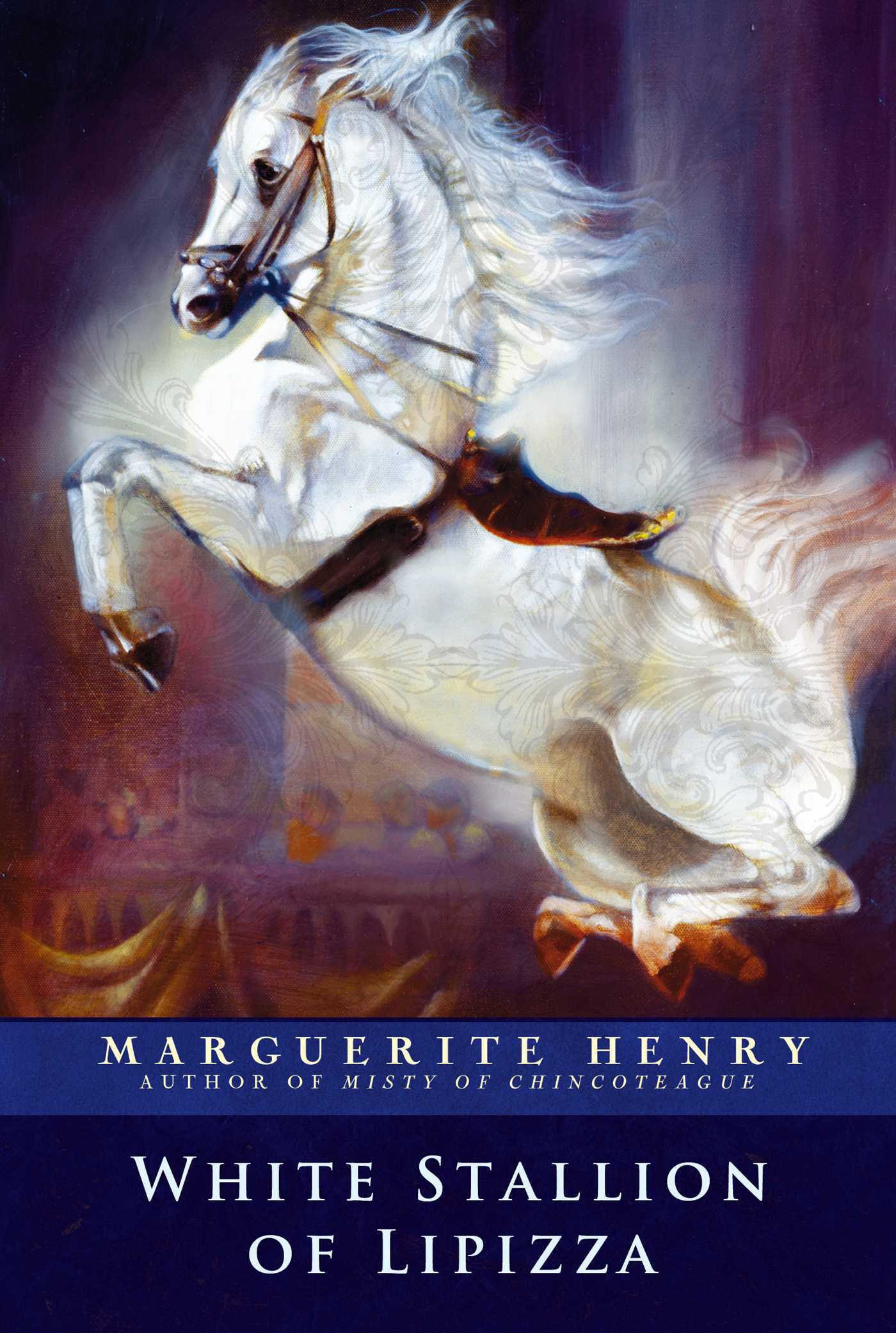 The magnificent Lipizzan stallions of Vienna come to life as never before in this exciting story from Newbery Award–winning author Marguerite Henry, back in print by popular demand.

A young boy named Hans dreams of one day working with the famed stallions of Lipizza. But coming from a family of bakers, Hans is discouraged from ever becoming a rider. That is, until the day he is invited to watch the extraordinary Ballet of Lipizzaners—from the Imperial Box!—and his life is changed forever.

Marguerite Henry artfully includes authentic details about the skillful training of both horse and rider as she weaves the story of Hans and his beloved Lipizzan stallion, Borina. The brilliance of Hans’s dazzling public performances and his devotion to the art of classical riding make this story uniquely rich in history and horsemanship—a tale to be treasured by horse lovers of all ages.

Chapter 1 THE MORNING PARADE
THE CLOCK on the steeple of St. Michael’s church showed two minutes before seven. Hans, driving his father’s bakery cart, clucked to Rosy to hurry. In two minutes they must be at the Hofburg. Rosy broke into a shambling trot, clattering over the cobbles at her best pace. And just as the church bells were chiming the hour of seven the policeman on the Josefsplatz threw wide his arms in a commanding “Halt!”

From both directions all cars screeched to a stop. Hans pulled up smartly. His body alerted, and a smile of eagerness spread across his face. His luck and timing had been perfect this morning. He and Rosy were not only first in line, but they were nearest the curb, too. The very best spot to see.

It was the Lipizzaners Hans was watching for, the famous white stallions of Vienna. Every morning they were led out from their stables on one side of the Hofburg, then through the archway to the great old Palace which housed the Spanish Court Riding School. Here they were carefully trained in the intricate and beautiful movements of classical ballet. And here each Sunday great crowds thronged the vast hall to see their unique performance.

Hans, the baker boy, had never been inside the Palace. He had no money for a ticket. But the horses fascinated him, and morning after morning he maneuvered for a glimpse of them in passing. From before daylight, while he splashed just enough water on his face to pass inspection by his mother, he began scheming how to hurry her as she filled the big bakery trays with poppyseed bread and rye, long rolls and tiny kipferln. On the rare occasions when she was ahead of schedule, he dawdled over his tasks of carrying empty flour bags and butter tubs to the attic storeroom. But when she was behind, he pitched in and helped feverishly, one eye on the clock. In his haste he sometimes dropped a kipferl, and once he clumsily let go a whole tray of hot bread. That day he ended up last in line, behind all the spitting, chuffing automobiles, and in the fog and fumes he couldn’t see at all. But today, here he was in first place.

It was bitter cold this early February morning, but Hans was unaware of his cold fingers. The bright moment of his day had come. His eyes fixed on the great stable doors. They swung open. Even before he caught his first glimpse, his whole body vibrated to the kettledrum rhythm of hoofbeats on the cobblestones. First one vague shape emerged from the depth of the stables; then suddenly the semidarkness was slashed by a parade of white stallions, blanketed in red and gold.

“Notice me! Notice me!” Rosy neighed sharply. For a whisper of time the lead stallion glanced at the aged mare hooked to the bakery cart. Then he faced front, and in majestic dignity stepped across the street with long, supple strides. The other stallions never turned their heads.

Spellbound, Hans watched the rippling movement of the powerful hindquarters, the thrust of foreleg, the proud curve of the neck. A groom in dark uniform was leading each stallion, but he seemed part of the thick winter fog so that for Hans he did not exist at all. There were only the stallions, possessed of such power and nobility that Hans watched in a state of bliss as they crossed the street while all traffic stood still.

With their disappearance into the Palace, Rosy let out a whinny of yearning.

“Never mind, Rosy,” Hans spoke to the old mare. “At least the biggest one noticed you.”

The strident tooting of automobile horns set Hans in motion. He jiggled the reins and the old mare shook herself into action, ambling along at her own pace. She knew the next stop, and the next, and now that she had seen the white horses for this day there was no need to hurry.

Hans, born and reared in Vienna, accepted as his birthright the austere grandeur of the Imperial Palace; and he accepted the fame and beauty of the white stallions though he did not know the story of how they came to be in Vienna. When he first began watching them, he was satisfied with looking. It was an interesting event in his workaday world. He didn’t mind being a delivery boy. In fact, some of the waitresses at the coffee houses were very nice and gave him treats of thick slices of sausage, which he much preferred to the baked goods his father made. And he even liked school, now that he was in the seventh year where history and science were full of daring and adventure. His world was small and ordered, and seemed likely to flow on quietly, like an arm of the Danube.

But lately as he jolted along, the old wagon creaking, Hans began to feel restless. He felt shut out when the great doors of the Palace closed on the mysteries of what went on within. Moved by an urge almost like Rosy’s herd instinct, he felt he must join the white stallions.

“From the stable to the Riding School they go,” he thought, “from one paradise to another. While Rosy and I just deliver today’s bakery goods and pick up yesterday’s trays, some washed clean, some spattered with whipped cream gone sour.”

With his glimpse of the horses each morning, curiosity was building up in Hans. Now he watched the newspapers for accounts of the Sunday performances. Every picture of the Lipizzaners doing their ballet routines he clipped and saved. The names of the movements fascinated him. It was like another language. The capriole, the courbette, the levade, the piaffe. What did they mean? When was he going to find out what went on inside the great Riding Hall? How did the Riding Masters work the miracles he saw in the pictures? How did they make a great big powerful stallion stand up on his hind legs and hop along as if he weighed nothing at all? How did they get him to fly through the air like the winged Pegasus in his mythology book? How did they do it?

One night he cornered his father in the kitchen where he was braiding fat ropes of dough into bread. “Papa,” Hans blurted, “could I go to the Riding School and learn to ride the white stallions?”

Before the man could straighten up and answer, Hans’s mother handed him a shaker marked Poppyseeds. “Ach, Hans,” she said, “never has there been a rider in our family. Or your papa’s. The bakery business will be yours some day. Listen how nice it sounds: Hans Haupt: Braided Bread a Specialty. And when Rosy is gone,” she added as if offering a premium, “you buy yourself a shiny new truck, yes?”

Hans seemed not to have heard. He watched the pastry brush in his father’s hands as it slapped the melted butter up and down and across the fat cheeks of the braided loaves. Dutifully Hans shook the poppyseeds over them and watched them slither into place.

“Hans!” his mother scolded. “Not so thick! The seeds come high. The price is up.”

Still there was no answer from the boy’s father. Not until a dozen loaves were glazed and shoveled into the huge oven did he give his full attention to his son. Studying Hans’s face, he wiped his floury arms and hands on his apron and settled himself into an old leather armchair in the living part of the kitchen. He nodded to his wife to leave the room. She picked up her bag of mending and obediently left. When the door had clicked shut, Herr Haupt smiled at Hans in understanding and affection. “The truth is what you want, eh, Hans?”

“Well, then, you must remember who you are.”

Hans shifted from one foot to the other; he hated long lectures.

“You come from a family of bakers, Hans. My grosspapa, my papa, your papa, and soon you. We are working stock. We do not venture behind the gates of palaces where great folks ride.”

“No one is ever satisfied with looking, Hans. It only builds the hunger. Like a starving man watching through coffeehouse windows, seeing people lift the forkful of strudel to their mouth.”

He got up and roughed his hand through Hans’s flaxen hair, as if now the query were answered and settled for all time. “Wash your mind of the white stallions, Hans. They are not for us; they belong to emperors and kings.”

He chuckled softly to himself. “The life of a baker is not so bad. In a way he is an artist, too. Now, do your papa a favor and run to the tobacco shop and buy me a schilling’s worth of my regular mixture.”

On his way to the tobacconist, Hans joined a crowd of window-shoppers studying a lighted display of art collections. Among them were porcelain statues of the Lipizzans. They were so real-looking that just by squinching his eyes he could will them to life and make them jump clear across the window on their hind legs. In another window were red velvet saddlecloths bordered in gold, and saddles of leather so fine that Hans could almost feel their smoothness. Reluctantly he left the scene and bought the tobacco, his mind still busy with the horses.

Next morning at five minutes to seven he was slow-trotting Rosy past St. Michael’s gate. If they let all traffic whiz by and if they hugged close to the curb, they could again be first in line.