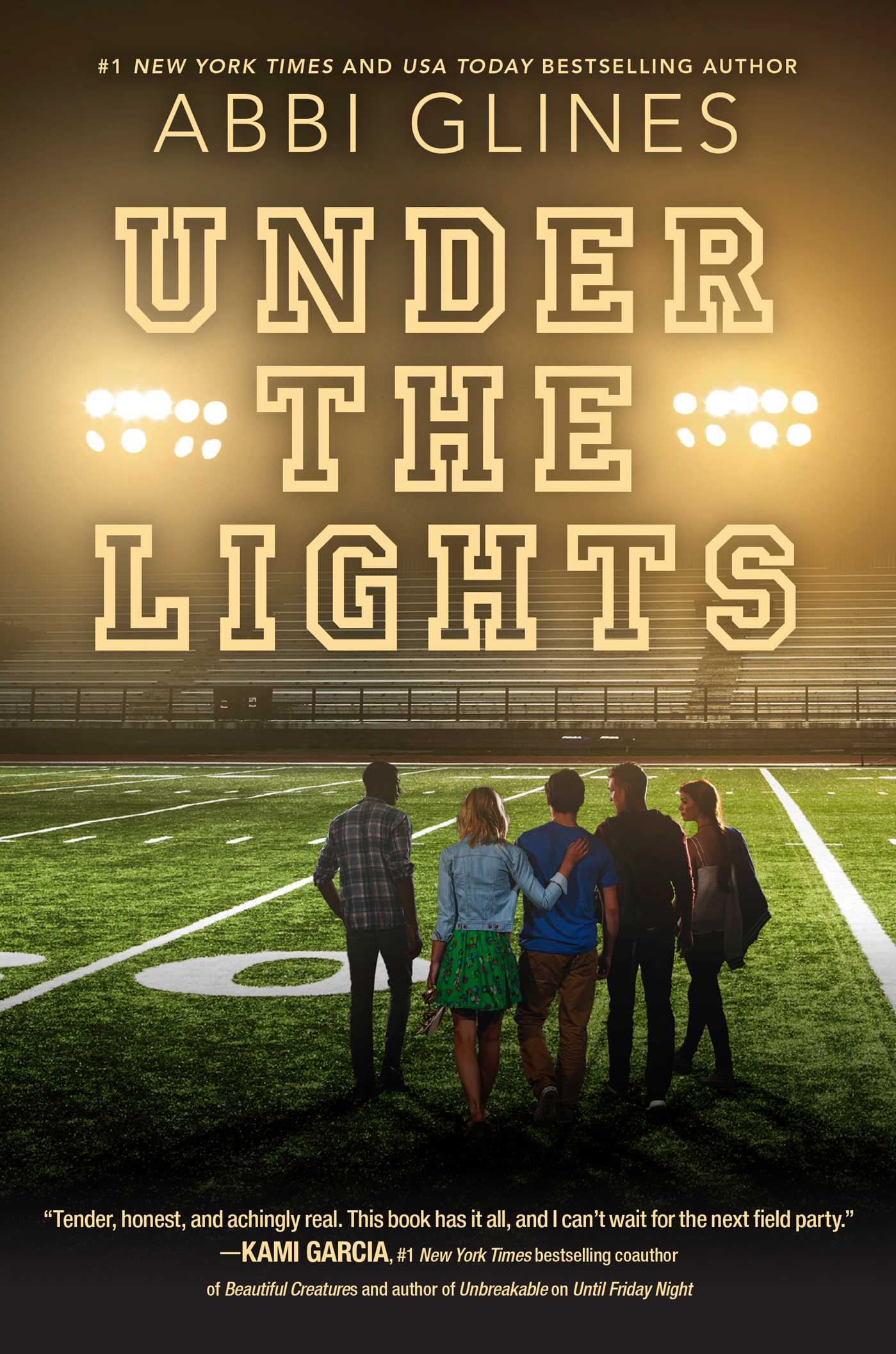 Willa can’t erase the bad decisions of her past that led her down the path she’s on now. But she can fight for forgiveness from her family. And she can protect herself by refusing to let anyone else get close to her.

High school quarterback and town golden boy Brady used to be the best of friends with Willa—she even had a crush on him when they were kids. But that’s all changed now: her life choices have made her a different person from the girl he used to know.

Gunner used to be friends with Willa and Brady, too. He too is larger than life and a high school football star—not to mention that his family basically owns the town of Lawton. He loves his life, and doesn’t care about anyone except himself. But Willa is the exception—and he understands the girl she’s become in a way no one else can.

As secrets come to light and hearts are broken, these former childhood friends must face the truth about growing up and falling in love…even if it means losing each other forever.

“Hasn’t changed much since you left. Go ahead and unpack. Settle in. I got more work to do up at the house. We’ll go in the morning and get you registered for school,” Nonna said as the pinched frown on her face that had been there since she picked me up at the bus station an hour ago, only grew more intense. “Don’t go nowhere. You hear me? Stay put until I get back.”

I managed a nod. I hadn’t been able to say more than “thanks” to her since I’d seen her. The last time I’d seen my nonna was two years ago when she’d saved up enough money to come visit us in Little Rock. She was a large part of my life. There had been times in my childhood that when I thought no one else loved me, I knew she did. Nonna never let me down.

Seeing the obvious disappointment in her gaze now was hard to swallow. But I hadn’t expected anything different. It was a look I had gotten used to. I saw it in everyone’s eyes these days when they looked at me.

No one believed me. Not my mother, certainly not my stepfather, or the police officer who’d arrested me. Not even my brother. No one. Which meant my nonna wasn’t going to believe me either. Sure she’d agreed to take me in when my mother packed my bags and left them for me on the front porch the day I was released from the correctional center I’d spent the last six months in. I had nowhere to go, and calling my mother’s mother was the only thing I knew to do. I’d lived with Nonna until the summer I turned eleven. Her home was the only real home I’d ever known.

My mother had finally decided she could take care of me, the child she’d had at fifteen and left with her mother the day she graduated from high school three years later. When my brother, Chance, had been eight, his father had finally married my mother. She wanted to bring me into the family. Problem was, I never really fit. My younger brother was adored by his father, and I seemed to always be in the way. I kept to myself until I turned fifteen and everything started to change.

“Answer me, Willa,” Nonna demanded, snapping me out of my thoughts.

“Yes, ma’am,” I replied quickly. I didn’t want to upset her. She was all I had left.

Nonna’s expression softened; then she nodded. “Good. I’ll be back soon as my work at the big house is done,” she added, then turned and walked away, leaving me in the bedroom that had been mine for the first eleven years of my life. I had been happy here. I had felt wanted here.

But I’d messed that up, too. I was good at messing up. If there was a wrong decision to be made, I managed to make it. I intended to put that in the past. I wanted to get back the girl I had been once. The girl whose grandmother was proud of her. The girl who didn’t act out for attention. The attention I had gotten from my mother hadn’t been the kind of attention I wanted. In the end I’d lost her. She wanted nothing to do with me. I’d killed any love she had for me.

Once the door closed behind Nonna, I sank down onto the twin bed that was covered in a quilt I knew my nonna had made herself. She loved quilting in her free time. Which wasn’t very often. She worked six days a week for the Lawtons. They let her off on Sunday so she could go to church and clean her own house. Which happened to be a cottage on the edge of their property. She’d been the Lawtons’ housecleaner and cook for as long as I could remember. My mother had grown up in this house. This room I was in had been hers once too.

Even though I’d been the product of a mistake my mother had made, my childhood here had been a happy one. My nonna had given me the love and protection my teenage mother hadn’t known how to give. And then there were the boys. Gunner Lawton and Brady Higgens had been my two best friends. Gunner lived in the big house with his parents and older brother, Rhett. From the time he and Brady had caught me in his tree house playing with his army men when we were four, we had been inseparable. I had been watching the boys for weeks go up into that tree house from my front yard at the cottage. I’d wanted to know what was up there. My curiosity had given me my first real friends.

When I had left with my mother, it was at the time things had started to change with all three of us. I wasn’t just one of the guys anymore. I was a girl, and things had begun to get awkward. Back then I had thought I was in love with Brady. He’d been popular and had a smile that once made my heart flutter wildly when directed at me. I thought then he’d be the only boy I’d ever love. I’d left soon after my feelings had started to grow. Now I could hardly remember what either boy looked like. There had been other boys in my life since them. Only one made a mark on me. Only one of them I had loved. Carl Daniels. I thought he’d be my forever. Until he decided that sleeping around with other girls was acceptable when I wouldn’t give him my virginity in the back of his car.

He had proven to me that I really couldn’t trust anyone. Loving someone meant getting hurt. My mother and Carl had both shown me how vulnerable love could make you. I wouldn’t make that mistake again.

It seemed like another lifetime now. Gunner and Brady were the safe-and-happy part of my past that I often dreamed about at night when I needed to escape my reality.

My life here would be very different from the way it had once been. I had made a mistake that I would never truly pay for. The guilt and regret would be my companions throughout my life. And being rejected by your own mother wasn’t easy to accept. It was a wound that went so deep I doubted I’d ever get over it.

I stood up and walked over to the mirror and studied myself. My mother’s dark blue eyes looked back at me. The straight blond hair that hit just below my shoulders was nothing like her red locks. I imagined I got my hair color from my father. A man I didn’t know. She would never even tell me his first name. She never even told my nonna. Once she had said it was because he couldn’t be a father to me. She was protecting me and him with her silence. I never understood that. I still didn’t.

I reached up and ran my fingers over my bare earlobe. The piercings that once framed my ear were almost all gone now. I’d not been able to wear them in the correctional center. I had gotten used to not having to deal with them, and I didn’t desire to put them back. Even without them, I was so different from the girl who had left here six years ago.

Praise for Until Friday Night: “Tender, honest, and achingly real—Until Friday Night captures the intensity of first love, the power of friendship, and the pain of growing up. This book has it all, and I can't wait for the next field party.”

Two years ago, Maggie Carleton witnessed a horrificevent. She saw her father murder her mother. Since that moment, she has notspoken a word. Even when forced to move in with her aunt, uncle, and cousin,she remains silent. West Ashbly is a super hot, popular, football-playing jockthat everyone wants to be friends with or date. No one knows the pain heendures every day having to watch his dad die from cancer. West does not feelcomfortable telling anyone about his father’s illness. However, when he meets agirl who cannot speak, he finally bears his soul. Maggie is just as shocked asWest when she responds, sharing her story with him. Having someone who canunderstand their pain and help them heal is a blessing for both of them. Glinesbelievably shows readers that love, trust, and friendship can result from somuch tragedy. The narrative illustrates that there is more to high school thanthe big game. VERDICT Romance fans will love therelationship between the protagonists and be sucked into the story line of thecircumstances that bring them together.

West Ashby seems to have it all—looks, a football future, and any girl he wants. No one, not even his closest friend Brady, knows that his dad—West’s biggest fan—is dying of cancer. Two years ago, Maggie Carleton saw her father murder her mother, and once she told police what happened, she refused to speak another word. Now Maggie lives with her cousin Brady’s family, and when she meets West, she sees the pain in his eyes that no one else recognizes. The bond between West and Maggie grows, and eventually
Maggie rediscovers her voice to walk West through his father’s final days. Aided by chapters that alternate between West’s and Maggie’s perspectives, what could be a typical romance—both are drop-dead gorgeous and could have anyone they want—is raised to a new level by Maggie’s self-imposed silence and the grief they are both experiencing. Glines’ novel will be welcomed by fans of Lurlene McDaniel who want something with more depth.