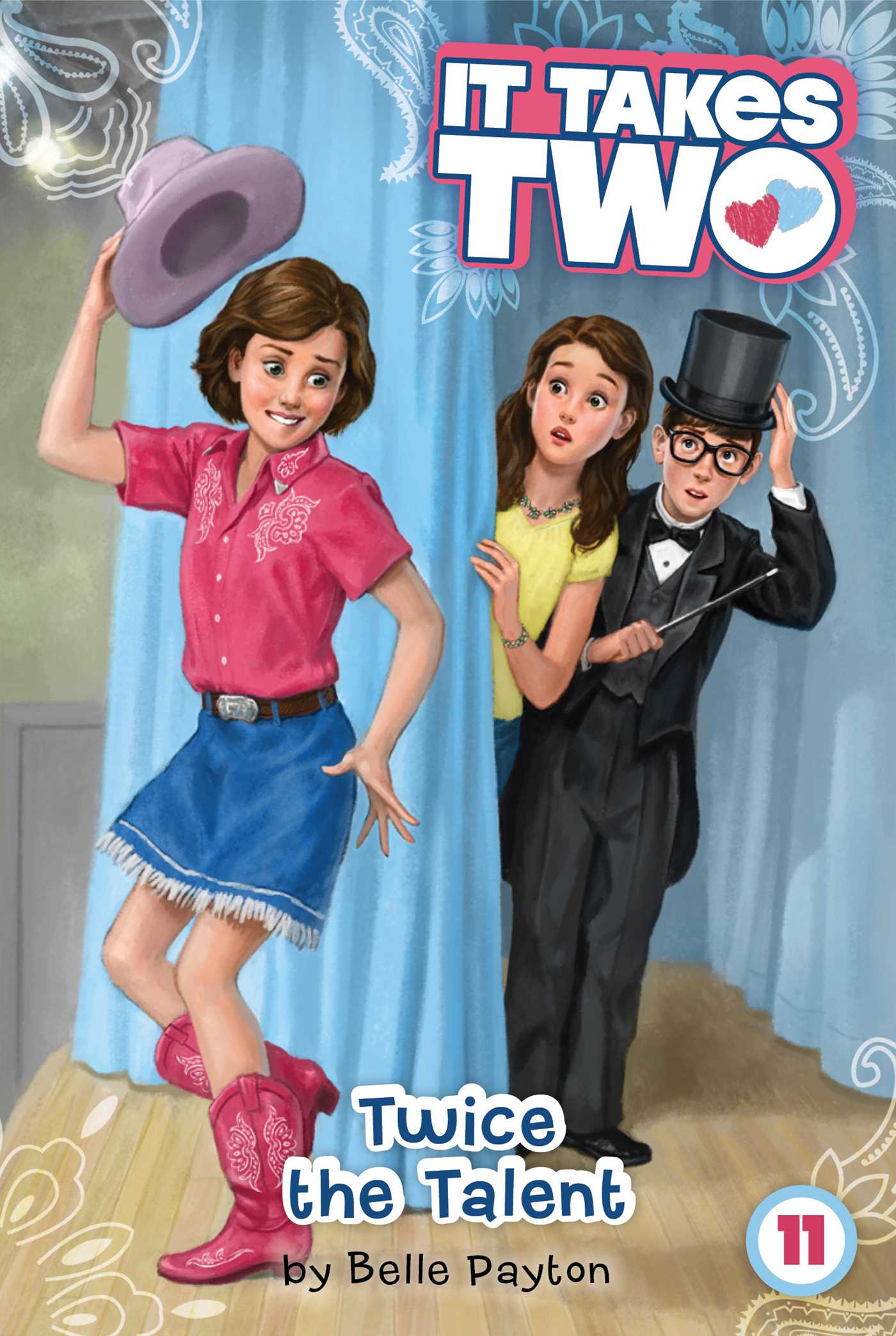 Book #11 of It Takes Two
By Belle Payton
LIST PRICE $17.99
PRICE MAY VARY BY RETAILER

Alex and Ava put their talents to the test in the eleventh book of the It Takes Two series!

After spraining her ankle during her first basketball game, Ava’s feeling pretty sorry for herself…until her friend Kylie falls off a horse and breaks her leg! Kylie’s going to be okay, but she does have one request: will Ava take over for her in the big line dance in the school Variety Show? Looks like Ava’s once again being pulled into the one place she hates most: the spotlight.

Meanwhile, Alex is working on a school project with a boy who’s been getting bullied—and he doesn’t even seem to appreciate it when she stands up for him! She wants to find a way to get him to come out of his shell a little, but will she be able to convince him to share his hidden talent at the Variety Show and win over their classmates?

Twice the Talent CHAPTER ONE
“So it really happened just like that?” Alex Sackett asked.

“Absolutely,” answered Charlotte Huang. “Mom was like, this kitchen renovation is driving me crazy, I just can’t take it anymore, and the next thing I knew we were on a plane to the Bahamas.”

“That sounds amazing,” said Rosa Navarro, a dreamy look in her brown eyes.

It was a Tuesday afternoon, Christmas break was over, and Alex and her friends Charlotte, Rosa, Emily, Lindsey, and Annelise were hanging out at Emily’s house. They had piled into Emily’s cozy bedroom. Alex sat on the floor, clutching a throw pillow.

Sometimes it was hard to believe that she and her family had only moved to Ashland, Texas, a few months ago. It hadn’t been easy to leave her life and friends in Boston behind—but here she was, with all new friends, laughing and talking like she’d known them forever.

“What’s amazing is your tan, Charlotte,” said Annelise. “I get so pale during the winter.”

“Not to mention freezing,” said Lindsey with a shiver. “I’d love to be on a sunny beach right now.”

Alex held back a smile. It was forty-nine degrees out, which was chilly for Texas, but downright balmy for a winter day in Boston.

Emily, the girl in the group Alex felt closest to, noticed her amused expression.

“I bet this is beach weather in Boston, right, Alex?” she teased.

“Ooh, we built this fabulous sand castle at the beach by our hotel,” said Charlotte, scrolling through her phone to find the photos. “Mom hired a sand castle architect, and he helped us. It had, like, twenty towers and a stable and everything.”

Alex raised an eyebrow. “Is there really such a thing as a sand castle architect?” she asked. Although as soon as she asked the question, she knew she shouldn’t have been surprised. Charlotte’s family had two housekeepers and a driver. Hiring someone to help build your sand castle was probably no big deal.

“Yeah, he worked with the hotel,” Charlotte replied, and then she frowned. “I can’t find it! Oh, wait, here’s that shot from the Christmas party!”

Everyone gathered around Charlotte to look, even though they all had tons of photos from the party on their phones. They’d held an Ugly Sweater party on the Saturday after Christmas, and it had probably been Alex’s best night in Ashland so far.

The photo on Charlotte’s screen was a group selfie of everyone in their ugly sweaters, mugging for the camera. There was Alex, laughing with her arm around her twin sister, Ava. They looked identical except for Alex’s long, wavy hair and Ava’s shorter, sporty haircut.

Next to Alex was Emily, sticking her tongue out, and Lindsey, who was posing like a supermodel. There were boys in the photo too, but the one who caught Alex’s eye was Corey O’Sullivan. He wore a silly grin on his face and a Santa hat on top of his red hair.

“That was such a fun night,” said Rosa. “Although I’m glad I won’t have to wear that ugly sweater ever again!”

“The sweaters are what made it a fun night,” Emily pointed out.

Lindsey got a mischievous twinkle in her eyes. “That was a sweet gift that Corey gave you, Alex,” she said quietly. “You know, you never told me if you and Corey used that mistletoe.”

Alex felt her face get hot, and she knew she must be bright red. She and Corey had almost kissed that night, under the falling snow, but she hadn’t told anybody about it—not even Ava. She wasn’t about to tell anyone in this room.

Part of the reason was that everything with Corey was super complicated. She had developed a crush on him right away when she first met him, but then she learned that Lindsey liked him too, so she backed off. Corey and Lindsey went out, but broke up. Then Lindsey started liking Johnny Morton, an eighth grader. That led to the Christmas party, where she gave Alex mistletoe and told her she should go talk to Corey.

And Alex had talked to Corey, outside, and they almost kissed—until the snow started to fall, which didn’t happen too often in Texas. Everyone had streamed outside, and the moment was over. But it had still been a magical moment, and it had been hers—just hers and Corey’s.

“Mistletoe? What about Alex and Corey and mistletoe?” Annelise asked eagerly.

“Hey, didn’t we come here so that you guys could work on your Variety Show routine?” Alex asked, trying to change the subject.

Her ploy worked. “That’s right!” Emily said, jumping up off her bed. “The show is only three weeks away and we’ve barely started practicing.”

“Or working on our costumes,” said Rosa. “We’ve got to think of something that will go with the Wild West theme.”

“So what are you guys doing?” asked Alex. The Variety Show seemed to be a big deal at Ashland Middle School. It was just about all anyone could talk about now that the holidays were over.

Annelise smiled. “We’re going to do a dance, like we did last year. You should dance with us!”

“Come on, you know I have two left feet,” Alex said. “Besides, as student council president I volunteered to work backstage.”

“That makes sense. I can just see you with a clipboard, organizing everybody back there. It can get pretty hectic,” Emily remarked.

Lindsey shook her head. “You could still dance with us. It’s a pretty easy dance. Charlotte’s new, and she picked it up right away. Here, I’ll show you.”

Lindsey jumped up and kicked a pillow out of her way. Then she played a song on her phone. It was a country song that Alex had never heard before, something about a broken heart.

Lindsey started moving her hips from side to side and tracing a heart in the air with her fingers. Emily, Rosa, Charlotte, and Annelise joined her. It was close quarters and the girls kept bumping into one another. They looked a little stiff, and frankly, Alex thought, pretty silly.

“See how easy it is?” Lindsey asked. “Anytime you hear the word ‘heart,’ you just go like this.” She traced a heart in the air again.

“Wow, that looks way too complicated,” Alex fibbed. “Now that I’ve seen it, I know I would just make a fool out of myself up there. And I am trying very hard not to commit myself to too many activities anymore. But I promise that I will be cheering you on backstage.”

“If I can do it, you can do it!” Charlotte said, as she bumped into Rosa.

“Sorry, I have to get to Ava’s game,” she said, grabbing her backpack. “But you guys look great!”

Alex hurried out of the room, relieved to be spared from joining the dance routine.

Sometimes having a twin sister came in handy!
Belle Payton

Book #11 of It Takes Two
By Belle Payton
LIST PRICE $17.99
PRICE MAY VARY BY RETAILER