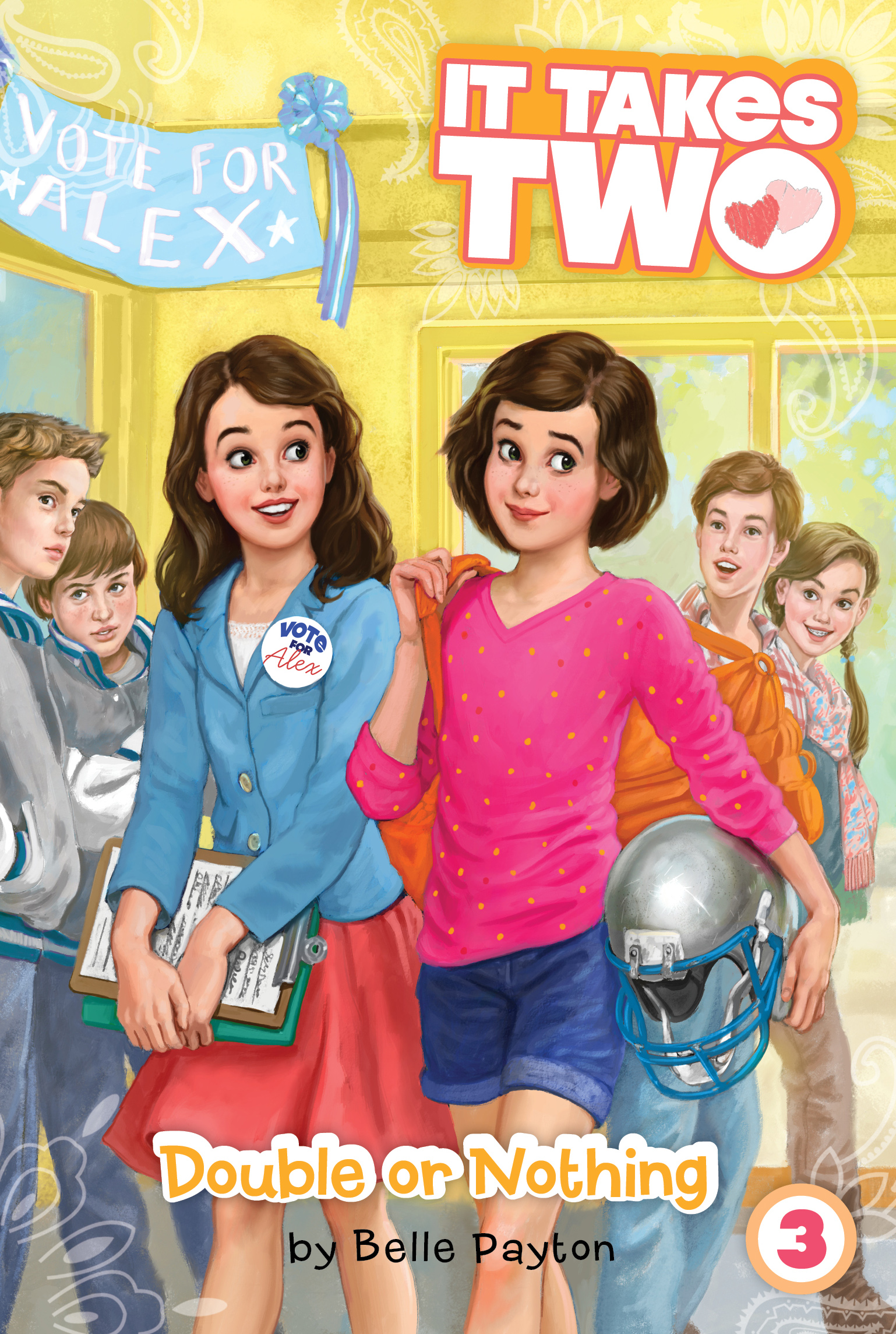 Book #3 of It Takes Two
By Belle Payton
LIST PRICE $6.99
PRICE MAY VARY BY RETAILER

In the third book of the It Takes Two series, Alex runs for class president and Ava tries out for the football team. Can both twins win?

It’s school election time, and Alex is determined not to let a small thing like a move across the country stop her from becoming seventh-grade class president! She may be new, but she’s probably the most ambitious candidate Ashland Middle has ever seen…and it does help that she’s the coach’s daughter, so everyone knows who she is.

It’s also time for football tryouts, and the boys are more than a little surprised when Ava shows up on the field! She’s a fantastic kicker, but she’s causing quite a bit of controversy as the first girl to want to play football in Ashland…and possibly stirring up trouble for Alex’s campaign. Will Ava’s attempt to follow her dreams cost Alex the presidency, or can Alex use her platform to convince the town that it doesn’t matter if you’re a boy or a girl, as long as you’re serious about football?

Double or Nothing CHAPTER ONE
“Alex?”

Not so much as a twitch. Ava took a step into the room. The shades were up, but it was still dim and shadowy in her sister’s bedroom, as the September sun had not yet risen.

Alex, a lump beneath the gray covers, mumbled something Ava couldn’t hear and turned her back to her sister.

Desperate times called for desperate measures. Ava strode in and sat down heavily on her twin’s bed, causing the lump under the covers to give a little bounce. Then she pulled the pillow out from under her sleeping sister’s head.

Alex sat up, her long, curly hair wild, her hands groping blindly. “What? What! Time to get up! What day is it?” A second later, her eyes focused on Ava. Her expression turned from sleepy confusion to wide-awake panic. “Ava!” she whispered, throwing back the covers. “Did I oversleep?”

Ava stood up. She was glad Alex wasn’t sick or anything, but this was still weird: Alex never overslept. She was always the first one up; annoyingly chipper in the morning, to the dismay of Ava, who was not a morning person, and their older brother Tommy, who wasn’t either.

“Yes, but you’re not going to be late,” said Ava. “We have plenty of time before the bus comes.”

“Plenty of time!” repeated Alex as she flew to her chair and grabbed the clothes she’d laid out the night before. “Twenty minutes is not ‘plenty of time.’?” She headed toward the bathroom. “How could I have overslept today, of all days! I have seventy-eight signatures, and I still need twenty-two more by the end of the day.”

Ava heard her twin grunt and slam the door to the bathroom, which was between their bedrooms. A second later, she heard the shower going.

Ava stood and contemplated her sister’s neat-as-a-pin bedroom, now bathed in pinky-gold tones as the sun rose in the eastern sky. Alex’s clipboard was on the top of the tidy pile of books on her desk. She was running for seventh-grade class president at Ashland Middle School, and campaign petitions were due today. But today was a big day for both of them; she, Ava, had slept fitfully all night long and finally gotten up before her alarm had rung. This afternoon was the first day of football tryouts, and she was a combination of excited and nervous.

The kitchen was bustling when Ava entered. Coach Sackett had his orange Ashland Tigers hat on, his briefcase was near the door, and he had just finished packing the girls’ lunches. Mrs. Sackett was still in her workout clothes—an oversize Patriots T-shirt and yoga pants—her long, curly hair pulled back into a ponytail. She had just come back from walking Moxy, the Sacketts’ Australian shepherd. Tommy’s mouth was full—a common occurrence—as he downed what remained of his bacon, egg, and cheese sandwich and stood up from the table.

Coach froze in mid-swig of his coffee.

They all gaped at Ava.

“Is she feeling sick?” asked Mrs. Sackett. Moxy thumped her tail loudly on the kitchen floor, waiting for Mrs. Sackett to set the bowl down.

“Nope, she’s fine,” said Ava, pouring out her cereal. “She was probably up late texting with Emily about her campaign strategy.”

Coach grabbed his briefcase, pecked Mrs. Sackett good-bye on the cheek, and leaned across the table to ruffle Ava’s already-mussed-up hair.

“Hey, careful there, Coach. I worked hard on my hairstyle this morning,” said Ava. She twirled a piece of short, curly brown hair around her finger and laughed.

“Good luck at tryouts today, darlin’,” he said, heading for the door. “Remember to stay low and move those feet.”

Ava grinned. “I will, Coach. I will.” Was his Texas accent re-emerging? He had grown up near Ashland but had lived in the Northeast for most of his adult life. They’d been back in Texas for several weeks now, and Ava was starting to detect an accent creeping back into his voice. Subtle stuff—like dropping the g’s on his –ing word endings. She made a mental note to ask Alex if she had noticed this too.

Alex hurried into the kitchen just after Tommy and Coach had backed out of the driveway and driven away. Her expression was frazzled, but the rest of her looked as smooth and put-together as ever. “Mom, no time for breakfast,” she said, picking up her lunch and swinging her backpack onto her shoulder. “I need to get to the bus stop in time to plan my strategy. I need seventh graders to sign my clipboard.”

Mrs. Sackett handed Alex a piece of toast and a peeled banana on a paper towel and nodded. She probably knew there was no arguing with Alex about the importance of a good breakfast on a day like today. “Good luck today, girls,” she said, as the sisters traipsed to the door, laden down with heavy backpacks. “It’s a big day for both of you.”

And out they went.

“Al, you know there are only four kids at our stop, and three are in sixth grade and one is in eighth,” said Ava, huffing along beside her sister toward the bus stop just around the corner. For someone who hated sports, Alex could certainly walk fast!

Alex nodded, finished her toast, swallowed the last of the banana, and brushed the crumbs off her shirt, all while maintaining her breakneck pace. As they turned the corner, they could see the bus in the distance, making a stop at the far end of the street. “I know,” she said. “But I think a couple of the kids two stops after us are in seventh. It can’t hurt to ask.”

“Speaking of asking, were you going to ask me how I was feeling about today?” asked Ava.

The bus was approaching their stop, and Alex had joined the little line of kids waiting to board. She turned and looked at her sister quizzically. “You? Why would you be stressing about me getting twenty-two more signatures? You never worry about details like that.”

Ava rolled her eyes as the bus doors opened. She followed Alex up the steep steps and said good morning to Mrs. Fogarty, their bus driver. “I meant how I was feeling about football. Which starts today, as you’ve obviously forgotten.”

“Oh. Right,” said Alex, and she slid into their usual seat midway down on the right. “You’re still absolutely positive you want to try out?”

Ava glared at her. “I’m a good kicker. Coach and Tommy both say I am. Why shouldn’t I try out for the team?”

“Because we’re in Texas,” said Alex patiently, with the air of someone who has explained the same point many times before. “And they do things differently here. What if they say girls can’t try out? Are you going to make a big fuss about it?”

“They’re not going to,” said Ava, hoping if she said it convincingly it would turn out to be the truth. “I looked up the rules on the district sports website, and there’s nothing on there that says girls can’t play.”

“Probably because the situation has never arisen,” Alex mused. “And it’s doubly complicated, of course, because of who our dad is. If you do make the team, how will you know if it was based on your talent or if it’s because our dad is the coach of the Ashland Tigers?”

“Wow,” said Ava, her voice dripping with hurt and sarcasm. “Thanks for the vote of confidence, Al.”

“Ava,” said Alex, more kindly. “I didn’t mean it like that. I just—” She broke off as the brakes squeaked, the bus slowed to a stop, and the doors swung open. “Be right back.” Alex jumped to her feet and squeezed past Ava to intercept the three kids making their way down the aisle.

Ava groaned inwardly. She could see Mrs. Fogarty’s furrowed brow in the rearview mirror as she waited for Alex and the others to sit down so she could get moving again.

Out the window, Ava could see several cars that had stopped for the bus’s flashing red lights, most likely people in a hurry to get to work.

The first kid, a tall girl that Ava vaguely recognized from her Spanish class, blinked at Alex in surprise. “Um, yeah,” she said. “I’m in seventh.”

“I thought so!” said Alex eagerly. “Would you mind giving me your signature for my candidacy for class president?”

The girl probably saw the determination on Alex’s face and figured the quickest way to resolve the situation would be to comply. She took the clipboard from Alex and hastily scrawled her name on it. Alex looked like she wanted to blockade the way until the other two could sign, but then Mrs. Fogarty actually half stood, looking extremely annoyed, so Alex quickly squeezed back into her seat beside Ava. “Twenty-one to go,” she said, and clicked her pen closed.
Belle Payton

For A Whole New Ball Game:
"The twin device is effectively deployed as each girl seeks to understand herself independently, in relation to her twin, and in the context of her new town; there's also appeal in the plot's sitcom elements of overheard conversations, secret observations, and all the uncertainty that comes with being a new place."

Book #3 of It Takes Two
By Belle Payton
LIST PRICE $6.99
PRICE MAY VARY BY RETAILER