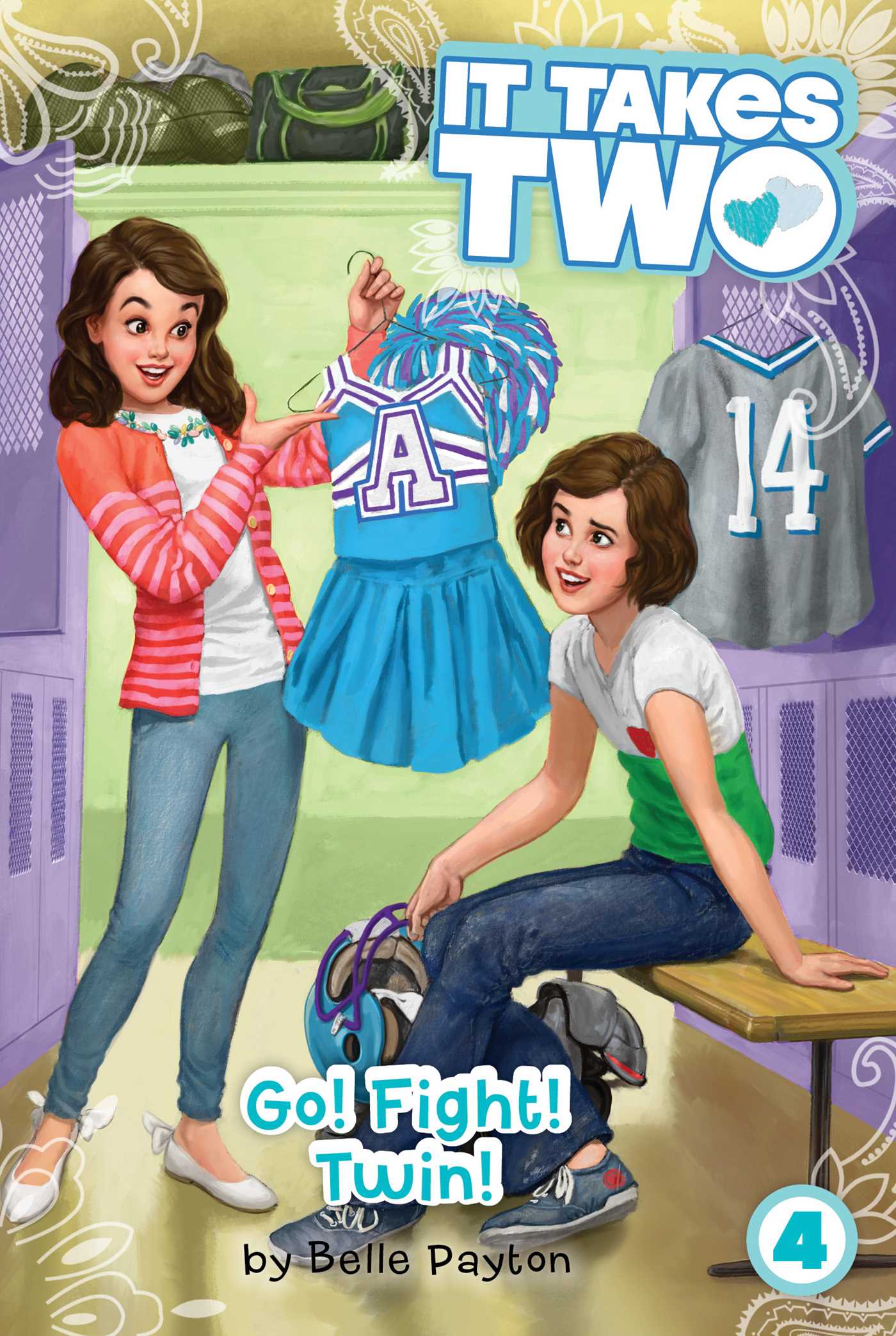 Book #4 of It Takes Two
By Belle Payton
LIST PRICE $6.99
PRICE MAY VARY BY RETAILER

Ava pretends to be Alex at the cheerleading tryouts in the fourth book of the It Takes Two series! Will the twins get away with their big switch?

All of Alex’s new friends are trying out for the cheerleading squad, and they convince her to try out with them. There’s only one problem: she’s the least coordinated person on the planet! Alex knows she can never actually be a cheerleader, but she wants to avoid total humiliation at tryouts, so she enlists Ava to pretend to be her and try out in her place—sometimes having a twin really comes in handy!

Alex instructs Ava to be good, but not good enough to make the squad. But Ava finds herself enjoying the routines, giving a great performance, and making the team! Ava can’t be a football player and a cheerleader at the same time…what’s a scheming pair of twins to do?

The bass drum player was pounding rhythmically to excite the crowd. The cheerleaders shouted and clapped and performed hair-raising acrobatics. Ava Sackett watched, holding her breath, as her friend Kylie McClaire’s older sister, Yvette, stood on another girl’s shoulders high above the ground and then pointed one leg up into the air.

But then the opposing team scored another field goal, and the Ashland Tigers’ fans lapsed into a despondent silence. The Tigers were losing by seventeen points, and there were only seven minutes left in the game.

From her seat high in the stands, Ava looked down at her older brother, Tommy. He stood on the sidelines with the rest of his teammates, dejectedly watching what was happening on the field. His helmet was off, and when he turned his head, she could see his thick brown hair drooping down over his eyes. Ava knew what he was thinking—not only was the team going to lose, but also there was no way he’d be going into the game.

Farther along the sideline was their father, Mike Sackett, who was the coach of the Ashland Tigers. His job was the reason their family had moved to Ashland, Texas, from the East Coast this summer. Ava watched as Coach stalked up and down the sideline in his Tigers jacket, communicating with his assistant coaches through the big headphones he wore. The assistant coaches were stationed in the tower high above the field, where they could watch the game.

“What happened?” demanded Ava’s friend Kylie. Kylie hadn’t really paid attention to football before she and Ava became friends—she was more interested in things like jewelry making and fantasy novels—but Ava was teaching her how the game worked. To Ava’s delight, Kylie seemed to enjoy football almost as much as Ava did.

“PJ misjudged the throw,” said Ava. “Did you see how Tyler Whitley stopped and cut over toward the sideline? PJ’s lucky it didn’t get intercepted. It doesn’t look good.”

“Is there any way we can pull out a win?” asked Kylie.

“Highly doubtful.” Ava watched Kylie’s sister leap off two people’s shoulders, land in a pike on their waiting arms, bounce up onto her feet, do a backbend, and finally land in a split. “Wow. Your sister is awesome.”

“Wow. Kylie McClaire’s sister is awesome,” said Alex Sackett, who was sitting between Lindsey Davis and Emily Campbell, a few feet farther along the bleacher from her twin sister.

Alex watched in fascination as Yvette stood on the shoulders of two teammates standing side by side, her arms up in a V. Then she pulled her right leg up from the side so it was touching her ear—all while standing on one foot on someone’s shoulder.

“Well, at our level we don’t do stuff like that,” said Lindsey. “But we do a lot of choreographed routines. It just takes practice.”

“I’m sure you could do it if you worked at it, Alex,” said Emily. “You should try out for cheerleading with us.”

“Yeah,” agreed Lindsey. “You’re from such an athletic family.”

“Ha,” said Alex. “Ava and Tommy inherited all the athletic genes.” Not only was Tommy on the high school football team, but Ava had just made the middle school football team a few weeks ago. Alex noticed that Rosa Navarro, sitting on the other side of Lindsey, was listening intently to the conversation but not adding to it. Alex had heard Rosa was one of the best seventh grade cheerleaders. Does she not think I have what it takes? Alex wondered.

“It’s a combination of dance, gymnastics, and tumbling,” Emily said. “But not all of us do the big acrobatic tumbling stuff. That you really do need to have practiced from a young age.”

“Don’t you think Alex should try out, Rosa?” asked Emily.

Rosa hesitated. “Well, not everyone is cut out for cheerleading,” she said. “It takes a lot of coordination and flexibility.”

Alex’s eyes narrowed. What was that supposed to mean? Did Rosa think she was uncoordinated?

The roar of the opposing team’s fans interrupted the conversation. The clock ran down. The Tigers had lost.

Alex was still busy thinking as everyone stood up to leave and her sister poked her arm.

“That was pretty grim,” said Ava.

Ava stared at her. “Uh, the game? The fact that we just lost?”

“Oh!” said Alex with a little laugh. “Right. Yeah, too bad. So are you going to Sal’s?” The middle school kids usually gathered at the local pizza place after home games.

Ava frowned at her. “Yeah, I promised Kylie I’d head over with her,” she said. “But I’m only staying for a little while—I want to rest up for my game tomorrow. I’ll see you there?”

“Yep, sure,” said Alex. She was still thinking about Rosa’s remarks. Not that she had time to participate in sports, now that she was class president. And it was true that Alex herself commented all the time that she was uncoordinated athletically. But it was one thing for Alex to say it. It was quite another thing for someone else to agree with her, out loud, in front of everyone.

And honestly, cheerleading? How hard could it be?
Belle Payton

For A Whole New Ball Game:
"The twin device is effectively deployed as each girl seeks to understand herself independently, in relation to her twin, and in the context of her new town; there's also appeal in the plot's sitcom elements of overheard conversations, secret observations, and all the uncertainty that comes with being a new place."

Book #4 of It Takes Two
By Belle Payton
LIST PRICE $6.99
PRICE MAY VARY BY RETAILER