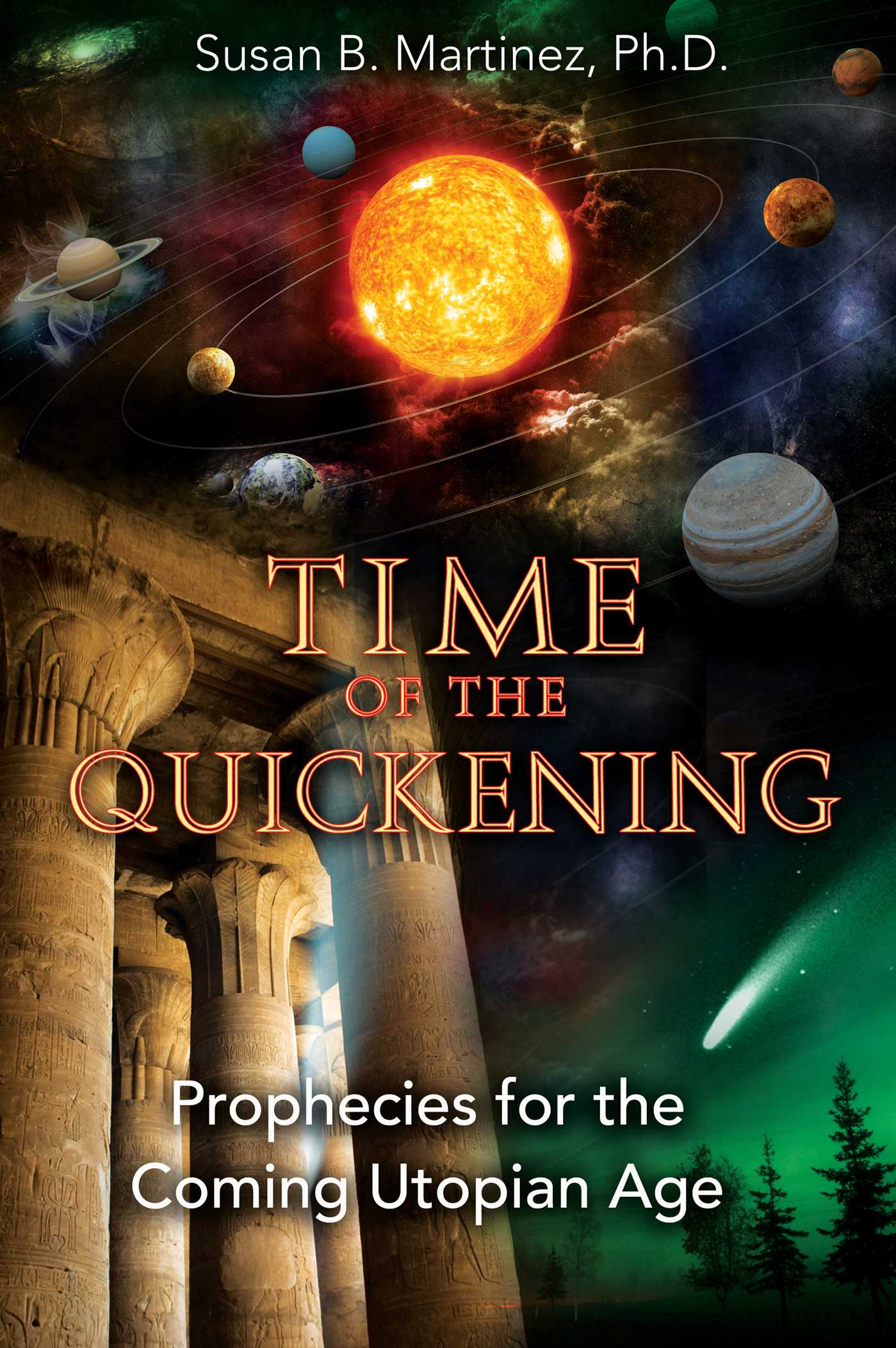 A guide to the science of prophecy, why so many predictions never come to pass, and the Golden Age ahead

• Presents a mathematical means of divining the future, revealed in the Oahspe Bible, using the Egyptian Tables of Destiny, a 12,000-year-old system so exact it can foretell every day of the year

• Reveals that we are not headed for Rapture and the Apocalypse but for “the Quickening,” the embryonic stage of a Utopian Age

Reviewing the cycles of history from biblical times to the present and prophecies of the future from Nostradamus to Edgar Cayce and Jeane Dixon, Susan B. Martinez reveals that our current “time of troubles” is not the beginning of Rapture, the Apocalypse, or Armageddon, but of the embryonic stage of a Utopian Age--the “Quickening” of the human race. Reviving the lost science of prophecy, Martinez explains why so many “great prophecies” have failed and presents the 12,000-year-old Egyptian system of prediction so exact it can foretell every day of the year, a method based not on the planets, astrology, or intuition but on Earth’s magnetic rhythms.

Using Earth science, historical research, religious texts, spiritualism, and patterns within the cycles of war and political milestones, she demonstrates that the past is the hidden key to the future and uncovers the prophetic numbers of Earth’s cycles--11, 33, 99, and 363--as set forth in the Egyptian Tables of Destiny, ancient texts brought to light by the 19th-century Oahspe Bible. Explaining how readers can use the Tables of Destiny to make their own predictions of the future, she presents her own forecasts of the risks and costs of technological progress, the destiny of America, the up-and-coming global religion, the truth behind climate change and the cause of earthquakes, and the true life expectancy of planet Earth as well as offering a preview of the Paradigm Shift and Golden Age ahead, a time of global unity and awakening of the soul of the world.

Civilization As We Know It

“The last day of the Lord is near,” cried William Miller, self-proclaimed prophet of the American sect of Millerites (Second Aventists) in May 1844. Issuing the “midnight cry,” Miller felt the crowning crisis of the ages at hand. He even gave “the last day” a date: October 23 of that year. But when that dreaded day arrived, and the next and the next and the Millerites bewailed--still in the cold world!

Oh well, end times, if nothing else, are good box office and grist for the mill among cults of despair, perhaps represented today by such groups as Aum Shirin Kyo, the terrorist Buddhist sect that released the lethal chemical sarin on the Tokyo subways in 1995. Those fanatics embraced the apocalyptic notion that the world would end sometime between 1997 and 2000.

But it didn’t. It just kept on spinning, spinning. . . . Actually our world is not scheduled to expire for quite some time (see chapter 4). And there is considerable difference between the end of a civilization and the end of the world (i.e., the planet). If we can move on from attention-grabbing hysterics, paranoia, and the misguided calculations of overwrought end-time soothsayers, the only remaining danger is the end of civilization as we know it.

A Book of Prophecy: Oahspe

The stage is being set for the next cosmological revolution in our way of thinking . . . reawakening interest in the relation of man to the Universe as a whole . . . the new Cosmology may come to affect the whole organization of society.
--Astronomer Fred Hoyle

Give ear, O earth, and be attentive to the words of your God. . . . The time shall surely come when all things shall be revealed to the inhabitants of the earth. . . . The multitude of my Kingdoms shall be opened up to your understanding.
--Oahspe

Of course, Hoyle’s prediction will come to pass! But first we need to come to terms with who we are and what we are.

In search of prophecy for the third millennium, I began to see two different meanings for the word prophet. On the one hand, the term signifies someone who is able to divine the shape of things to come, like a soothsayer of old or today’s clairvoyant who unexpectedly “sees” what has not yet come to pass, but will.

Yet we have also long used the word prophet simply to denote the wise men or sages of their time, whose genius is not necessarily in predicting anything but merely in interpreting (correctly) the currents of their day. They are, in a word, the mouthpieces of the times. The enlightened ones. Examples from our modern era include President Abraham Lincoln, Mohandas Gandhi, and Rev. Dr. Martin Luther King Jr.

In these pages, we will dip in to both kinds of prophecy: the future kind and the wisdom kind. In a way, they are inseparable. Trekking across this howling wilderness called prophecy, exhausted and discouraged by the number of detours set up by false teachings, I often lean on the staff of knowledge embodied in the Oahspe bible.

Oahspe offers a new source of information that we can work with deeply embedded in its copious verses, for it reveals the lost science of numbers and how to become a prophet oneself. Breaking the silence of the taciturn Faithist community (“Faithist” being the group name for those, past and present, who worship the Great Spirit and practice His commands), I now present the Tables of Prophecy, used in antiquity by priests and mathematicians for the benefit of the commonwealth and revealed for modern times within the pages of Oahspe. This system is mathematical, numerical, and historical. Based on the primary unit of eleven years (an “ode”), these Winter Tables, as they were called, contained all the “prophetic numbers” needed to see--and head off--coming events and disasters. What impresses me most is that this kind of prophecy is a method. It is not psychic foreseeing; it is not any of the “psychomancies” that seek the future in the random toss of pieces or parts; it is not random at all. It is a method, based simply on a science of numbers and cycles.

Indeed, all of this is a lost science, yet much of it can be recovered. For the interested reader who would like to become a prophet, this book teaches you how to prophesy by applying the prophetic number 11 and its key multiples: 22, 33, 66, 99, 121, and 363. But it is not just prophetic numbers that we are putting to work. This is the only system of prophecy (besides that of the Mayas) that uses history, that uses the past to foretell that which has yet to unfold.

The late Wing Anderson, publisher of the Oahspe bible from 1935 to 1955, grappled with the prophetic numbers and predicted various outcomes for our war-torn world. Wing once described Oahspe as giving not only a “history of the rise and fall of races from the beginning of the world to the present, but [also] predicting the final outcome of things in general and of many lesser situations in particular. . . . It is in this miraculous book that we find the explanation of what is occurring throughout the world . . . when the institutions of the old 3,000 year cycle, which ended in 1848, are destroyed to make way for those of the Kosmon Age.” To the alarmist who thinks that prophecy must state we will end in a blazing apocalypse, Anderson, always gallant, did say, “This is not the end. It is only the beginning.” The facts are straightforward, he said. “A new world is in the making. The institutions that grew up in the three thousand year cycle that ended in 1848 have played their parts in the evolution of mankind. It is now time for their exit.”
Susan B. Martinez

“In her book The Time of the Quickening, Susan B. Martinez has shared with her readers an impressive body of work regarding the art of prophecy. In addition, she has presented a unique and uplifting message of hope in a world gone awry.”

– Stanley Krippner, Ph.D., coauthor of Extraordinary Dreams and How to Work With Them

“Susan Martinez has a way of discovering the spiritual connection in history and linking it with rare books, documents, and events. She is one of the best historical researchers I have ever known, and this book is a wealth of information. You may not agree with everything in it, but you will enjoy reading every sentence and it will stimulate your thinking. I highly recommend this book.”

– John DeSalvo, Ph.D., author of The Lost Art of Enochian Magic and Decoding the Enochian Secrets

“Her [Susan Martinez] takes on our past and her forecasts for our future, e.g., on America’s destiny, the world economy and climate change, make this a system to be taken seriously.”

“. . . what is interesting is that she demonstrates that anyone can be a prophet. All it takes is research and an appreciation for a handful of sacred numbers.”

“The Time of the Quickening is not just a well-written, entertaining read. It is a great antidote for the doomsday hysteria that we may fall prey to during these times of change.”

“Susan Martinez has given us a masterful and enlightening treatment of prophecy past, present and future, with a welcome twist of hope!”

– Paul F. Eno, author, co-host of Behind the Paranormal on CBS Radio