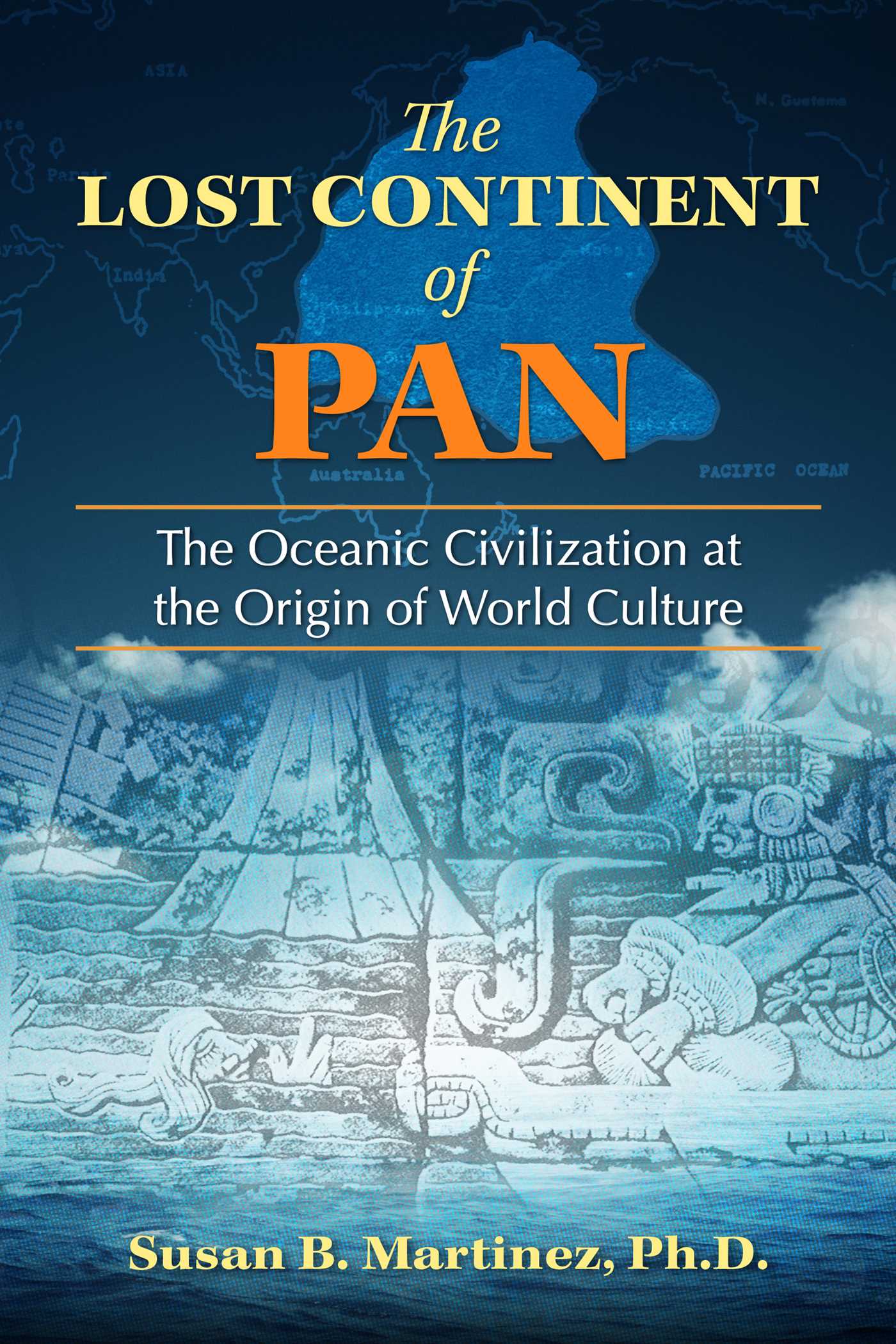 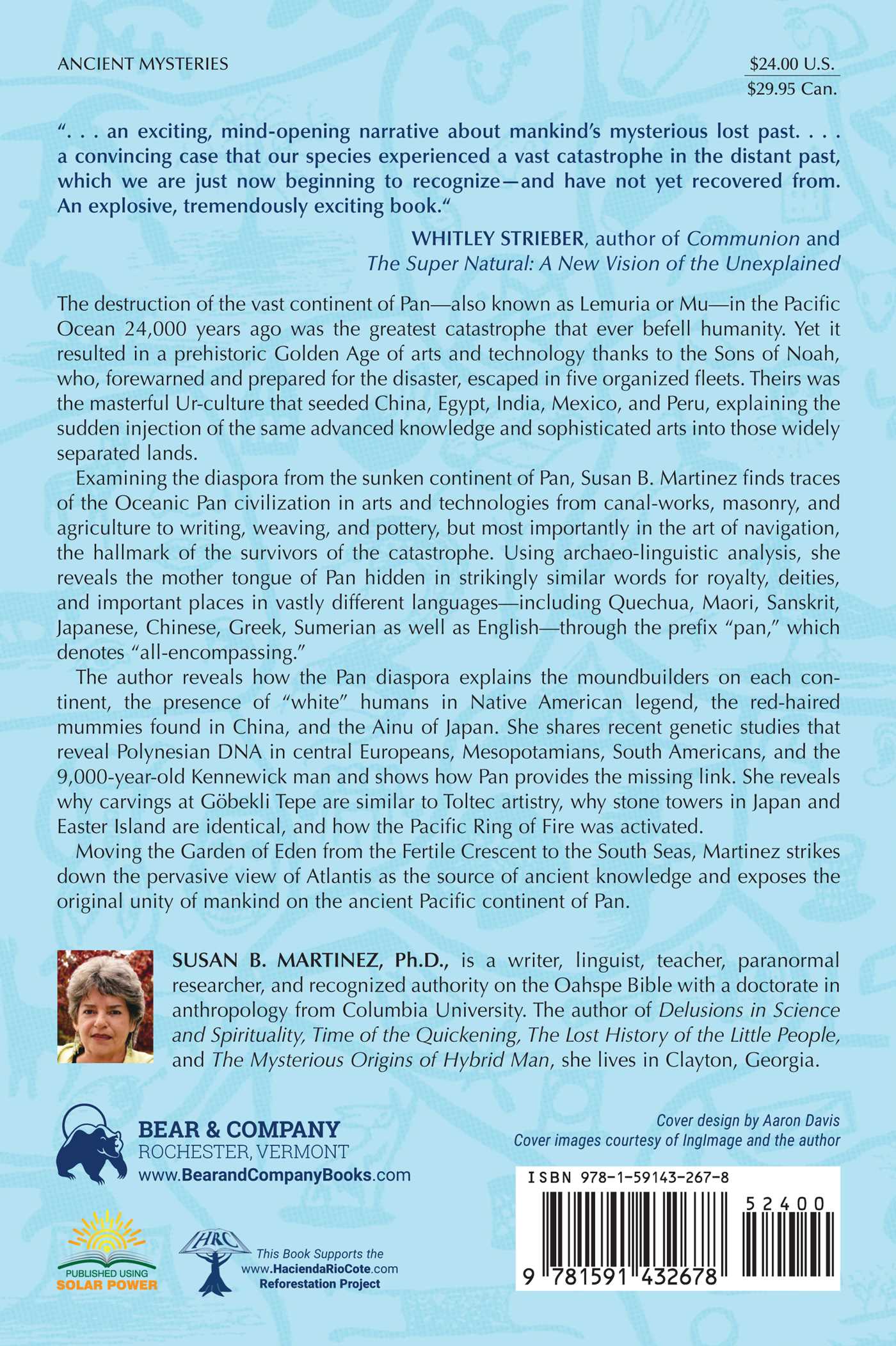 By Susan B. Martinez
Published by Bear & Company
Distributed by Simon & Schuster
LIST PRICE $24.00
PRICE MAY VARY BY RETAILER

Reveals the Pacific Ur-culture that seeded the ancient civilizations of China, Egypt, India, Mexico, and Peru

• Explains the red-haired Caucasian mummies of China, the Ainu of Japan, the presence of “white” humans in early Native American legend, and other light-skinned peoples found in Southeast Asia and the Middle East

The destruction of the vast continent of Pan--also known as Lemuria or Mu--in the Pacific Ocean 24,000 years ago was the greatest catastrophe that ever befell humanity. Yet it resulted in a prehistoric Golden Age of arts and technology thanks to the Sons of Noah, who, forewarned and prepared for the disaster, escaped in 5 organized fleets. Theirs was the masterful Ur-culture that seeded China, Egypt, India, Mexico, and Peru, explaining the sudden injection of the same advanced knowledge and sophisticated arts into those widely separated lands.

Examining the diaspora from the sunken continent of Pan, Susan B. Martinez finds traces of the oceanic Pan civilization in arts and technologies from canal-works, masonry, and agriculture to writing, weaving, and pottery, but most importantly in the art of navigation, the hallmark of the survivors of the catastrophe. Using archaeo-linguistic analysis, she reveals the mother tongue of Pan hidden in strikingly similar words for royalty, deities, and important places in vastly different languages, including Quechua, Maori, Sanskrit, Japanese, Chinese, Greek, and Sumerian, as well as English through the prefix “pan” which denotes “all-encompassing.”

The author reveals how the Pan diaspora explains the mound builders on each continent, the presence of “white” humans in Native American legend, the red-haired mummies found in China, and the Ainu of Japan. She shares recent genetic studies that reveal Polynesian DNA in central Europeans, Mesopotamians, South Americans, and the 9000-year-old Kennewick man and shows how Pan provides the missing link. She reveals why carvings at Gobekli Tepe are similar to Toltec artistry, why stone towers in Japan and Easter Island are identical, and how the Pacific Ring of Fire was activated.

Moving the Garden of Eden from the Fertile Crescent to the South Seas, Martinez strikes down the pervasive view of Atlantis as the source of ancient knowledge and exposes the original unity of mankind on the ancient Pacific continent of Pan.

A Comparison of Turkey and America

How can we interpret Heinrich Schliemann’s discovery that Trojan pottery shards are identical in chemical composition to those found at Tiahuanaco? And why does Turkey’s highly refined art--for example, at Göbekli Tepe--remind us so much of Toltecan artistry? Göbekli’s huge columns, like Cocle’s, run in rows. Even though the Cocle beards indicate a modern race, the characteristic of wide-set eyes seen on its statues points us to some of the oldest races on Earth: Pygmies’ eyes, besides bulging, are often set wide apart, as are those of the Bushmen and the tiny Palauan specimens (in Micronesia). This morphology reminds us of W. Scott-Elliot’s reconstructed Lemurians, whose eyes were set so far apart they could supposedly see sideways without turning. The Ainu of Hokkaido, for all their “Caucasian” features, also have those primeval eyes: set far apart. And those ancient eyes also belonged to the little Etruscans of Italy--a civilized race of astronomers and builders representing an advanced civilization of the archaic era--yet so similar to the far-away master race at Cocle, Panama.

If those wide-eyed Etruscans migrated to Italy from Asia Minor, it would explain why Etruscan and Trojan vessels are of the same stamp. But then how do we explain Etruscan urns that are identical to ones in North America and Brazil? (Homet, 1963, 172); and the Etruscan “false arch,” which matches that found at Palenque in Mexico? The sprawling Cocle civilization is considered the oldest culture in the New World: making it easier to understand Cocle affinities with Turkey: the farther back we go, the plainer the resemblances of these “cousins” whose roots are on Pan.

These two parts of the world--Asia Minor and the Americas--were somehow under a common influence:

Their spirit huts are of the same type.

• Many Incan words appear in the Turkic-speaking Chuwashen vocabulary.

• “Laron” cases (white little people) have been found in both Ecuador and Turkey.

• The ceramic work at Troy and Tiahuanaco is made of the same composition of clay. Bronze vases among Troy’s treasures of Priam were identical to Tiahuanaco’s--same size, shape, and owl-head.

The links extend back to the Motherland: the large statues at Tiahuanaco corresponds to Easter’s in both sculptural technique and architectural style. Easter Island’s founder, Hotu Matua, has the same story as Peru’s Manco Capac. The construction of Easter Island’s Vinapu “was not just similar, but identical to that of Cuzco, Machu Picchu, Sacsayhuaman, and Ollantaytambo in the high Andes of Peru” (Childress, 1988, 317). Indeed, both Cuzco and Easter were called the “Navel of the World”--as was Göbekli Tepe! Easter Island’s rongo rongo tablets were their own version of the pillars, upon which were inscribed diluvial histories. Consider also the flat-topped heads on Easter Island statues (moais): most of the monolithic statues discovered at the Cocle temple site in Panama had precisely the same flat-topped craniums.

We find the same flat heads in Colombia’s Cauca Valley, reproduced in metal, stone, and even huge rock carvings; they apparently correspond to a flat-headed race that once inhabited Venezuela. Although the strange custom of head-flattening has invited a lot of guesswork, there is good reason to believe that skull deformation was originally intended for the sake of prophecy.

Then came the God of evil, I'tura (Ahura) . . . before the prophets . . . obsess[ing] the nations and tribes of men to worship him. . . . And he set on foot a war of plunder. . . . And he taught mortals to flatten the head, to make prophets, and lo, the land of Guatama [America] became a land of seers, prophets, and conjurers . . . consulting the spirits of the dead for war and for earthly glory in blood and death.

In the days of Abraham, a man or woman whose head had been flattened in infancy sat by a table covered with sand, upon which the spirits wrote with the finger. And this person communing with the spirits was . . . next to the Sun King in rank.

Flat skulls also appear on stone images of the Pacific’s Marquesas Islands, which boast processional avenues leading to a sacrificial altar built of monolithic stone (Spence, 1933, 39). Head-flattening was practiced in New Hebrides as well, by means of bandages, and in Hawaii and New Zealand and in the Cook Islands where it is done by massage. In Penrhyn Island it is done with cradle boards.

In North America, head flattening continued to be practiced at the Adena Mounds in Ohio and among the Kwakiutal and Flathead Indians; almost universal, we see it also in Mexico, Peru (Aymaras), Bolivia, Brazil, the Caribbean, Crimea, Scythia, Austria, Scandinavia, Lapland, Finland, Caledonia, Basque country, Egypt, Crete, Arabia, Africa (Mangbetu people), China, Turkey, Australia, Borneo, and New Guinea. It persisted until recent time among the Turks and French. “Is it possible to explain this except by supposing that it originated from some common centre?” (Donnelly, 1985, 270). Of course he means Atlantis but not necessarily--for it can be explained by common inspiration.

Ahura sent tens of thousands of angels into all the divisions of the earth . . . Ahura's emissaries inspired thousands of experiments . . . by which a prophet or seer could be made among the mongrels . . . and discover[ed] that by pressing down the front brain of infants they could be made capable of su'is [clairvoyance]. And infants were strapped on boards, and another board strapped on the forehead to press the head flat; and every day the headboard was re-strapped tighter than the day before, until the forehead, which holds the corporeal judgment, was pressed flat. (author's italics)

“Not since I read Charles Hapgood’s Maps of the Ancient Sea Kings have I encountered such an exciting, mind-opening narrative about mankind’s mysterious lost past. But The Lost Continent of Pan goes far beyond Hapgood in its exploration of the meaning of ruins, linguistic entanglements, and genetic markers to make a startlingly convincing case that our species experienced a vast catastrophe in the distant past, which we are just now beginning to recognize--and have not yet recovered from. An explosive, tremendously exciting book!”

– Whitley Strieber, author of Communion and The Super Natural: A New Vision of the Unexplained

“The Lost Continent of Pan by Susan B. Martinez is an excellent book for anyone interested in archaeology, lost continents, and the true origin of man. The information in this book far surpasses anything taught in schools about the history of our planet Earth. I highly recommend this book.”

“A scholarly work of great detail, The Lost Continent of Pan sheds light on a multicultural Pacific and Central America and presents compelling evidence for a mass migration across the world. I now have a better understanding of Lemuria (Mu) and the ancient past.”

By Susan B. Martinez
Published by Bear & Company
Distributed by Simon & Schuster
LIST PRICE $24.00
PRICE MAY VARY BY RETAILER