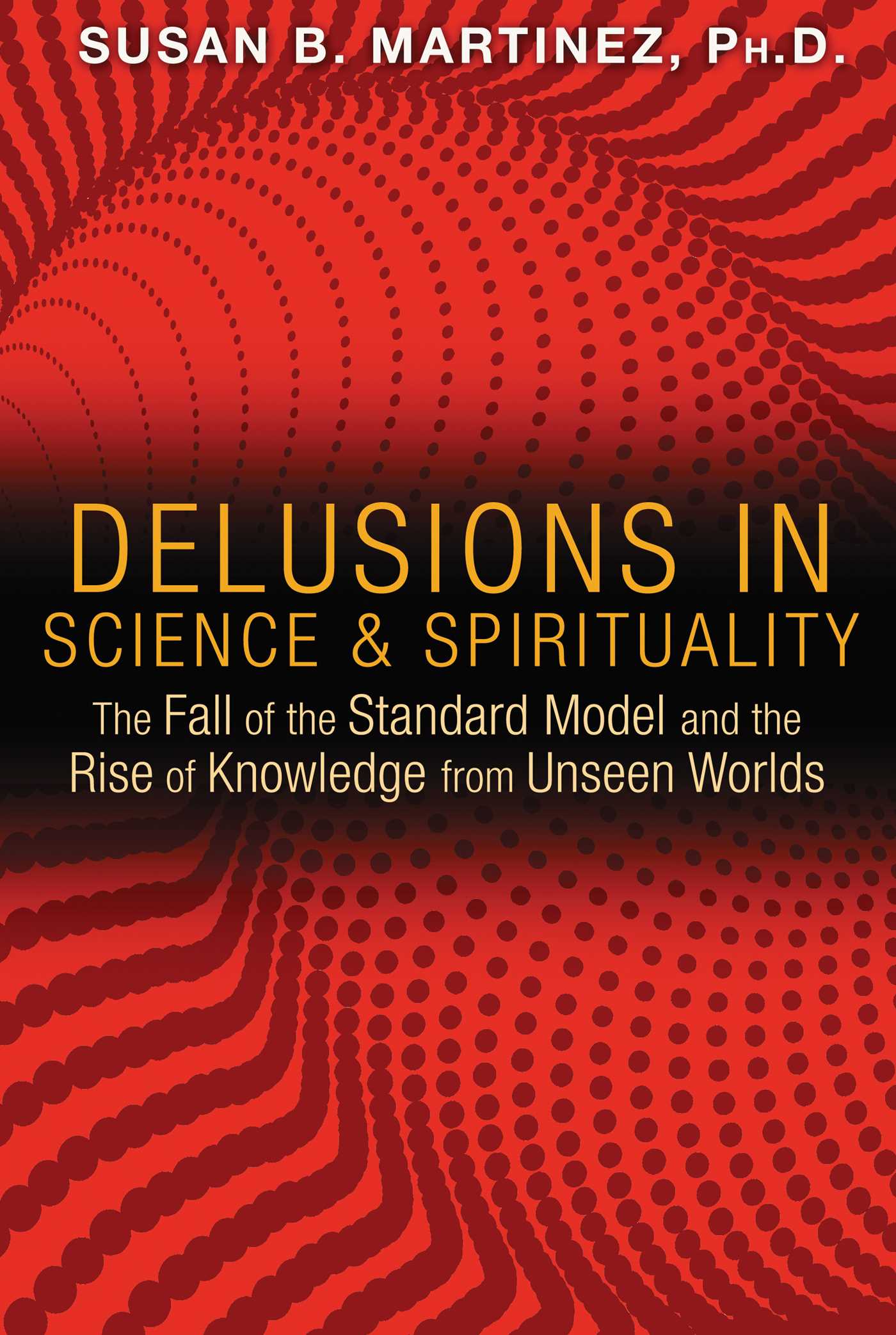 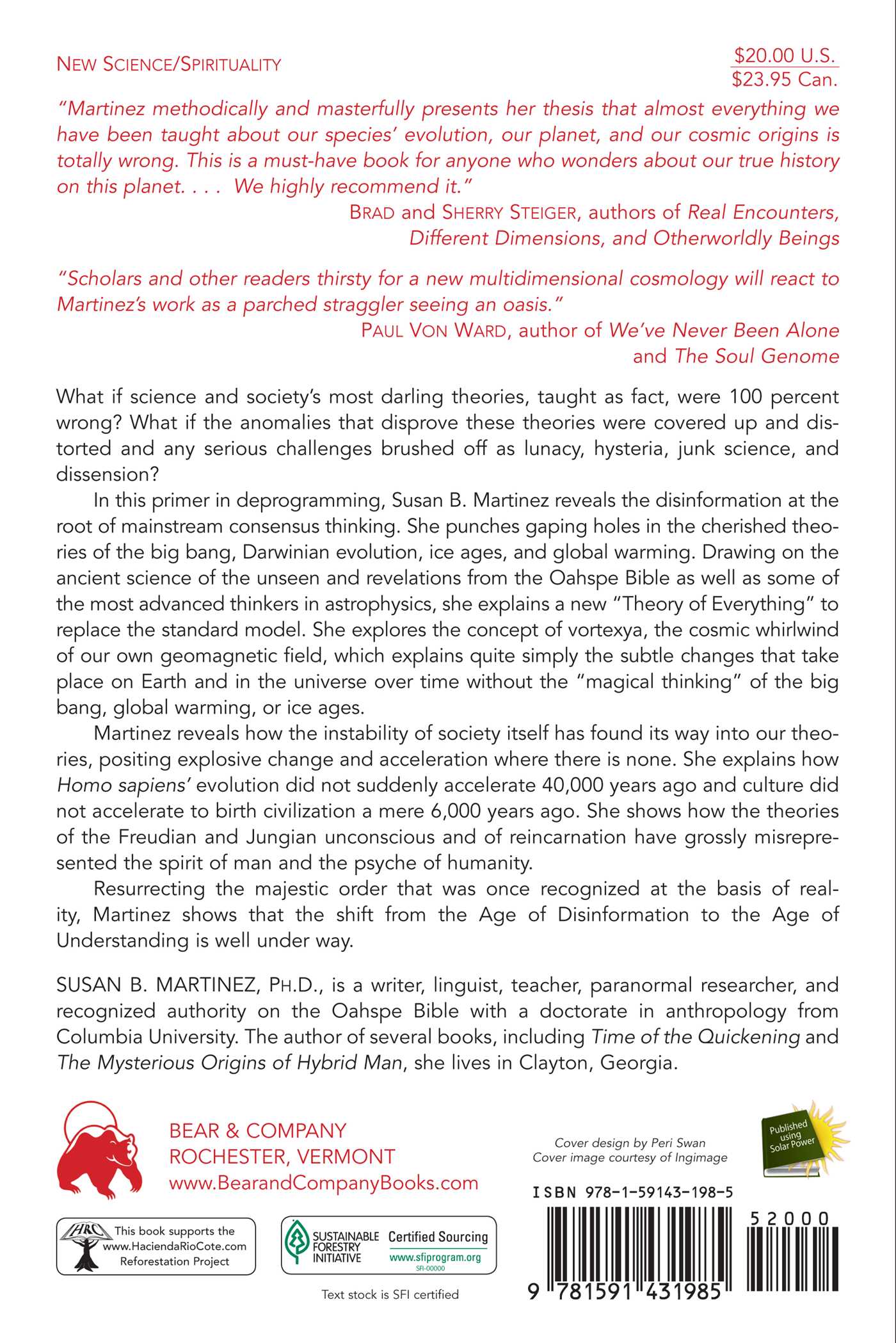 • Reveals a new “Theory of Everything” to replace the standard model and complete our knowledge of Earth Science, anthropology, psychology, and spirituality

What if science and society’s most darling theories, taught as fact, were 100% wrong? What if the anomalies that disprove these theories were covered up and distorted and any serious challenges brushed off as lunacy, hysteria, junk science, and dissension?

In this primer in deprogramming, Susan B. Martinez reveals the disinformation at the root of mainstream consensus thinking. She punches gaping holes in the cherished theories of the Big Bang, Darwinian evolution, ice ages, and global warming. Drawing on the ancient science of the unseen and revelations from the Oahspe Bible as well as some of the most advanced thinkers in astrophysics, she explains a new “Theory of Everything” to replace the standard model. She explores the concept of vortexya, the cosmic whirlwind of our own geomagnetic field, which explains quite simply the subtle changes that take place on Earth and in the universe over time without the “magical thinking” of the Big Bang, global warming, or ice ages.

Martinez reveals how the instability of society itself has found its way into our theories, positing explosive change and acceleration where there is none. She explains how homo sapiens’ evolution did not suddenly accelerate 40,000 years ago and culture did not accelerate to birth civilization a mere 6,000 years ago. She shows how the theories of the Freudian and Jungian unconscious and of reincarnation have grossly misrepresented the spirit of man and the psyche of humanity.

Resurrecting the majestic order that was once recognized at the basis of reality, Martinez shows that the shift from the Age of Disinformation to the Age of Understanding is well underway.

THE FIX IS IN
Or the Universe Has Always Existed

What is essential is invisible to the eye.
--Antoine de Saint-Exupery, The Little Prince

Much of what exists is, frankly, in the unseen. Who can see gravity? Nothing in black holes can be observed. Nor can we see subatomic particles or “dark energy” or the void into which the galaxies recede. The quantum world itself is a “vast porridge” where nothing is fixed or measurable. And the more we chase down the “particle” (a thing), the more it appears to be a “wave” (an action). Matter and energy, we have come to accept, are ultimately interchangeable; therefore, the seen world (matter) is an aspect of the unseen (energy, force). E = mc2. Today, paradoxically thanks to theoretical physics, the unseen is coming into its own, much of the universe lies beyond what we can observe. Quantum physics, without intending to, has brought us to the doorstep of Es. But to the strict materialist, visible and tangible elements still govern forces rather than the other way around, and forces (being unseen) are immaterial. Yet elements of themselves have no force whatsoever (as discussed in chapter 1).

George Morley, who was hierophant of the British Church of Kosmon at Surrey, England, once lectured:

Today, with all our civilization and learning, we have no higher conception of the Great Architect of the Universe and the brotherhood of man than had they of the ancient world. The grand philosophies we have built have toppled to the ground, and we are left like a rudderless boat upon the troubled sea of speculation. . . . In many cases the result has been to extinguish faith altogether and drive men into a kind of fatalistic and selfish materialism. (“Path of Light,” Kosmon Archives)


Today, as we move imperceptibly from the hectic Age of Information to the Age of Maturity and Understanding (Kosmon), forces unseen like gravity or dark energy--as opposed to “things” in the seen world-- are becoming better known. Sooner or later, enlightened science will recognize the long-sought mechanism of things, the all-embracing twin processes of Condensation and Dissolution--forces, not elements--that make and unmake worlds.

Science today upholds the secular paradigm by teaching that the physical world created itself and everything else. We are taught that quanta and the stars as well as all species and culture are self-creating, self-organizing entities. Forget the Great Architect. No Creator need apply. No higher intelligence, we are taught, is involved, only the spontaneous emergence of structures, system, and order--not unlike the theory of spontaneous generation that was scotched more than 150 years ago. This self-creating universe not only banishes the Great Spirit to the unimportant realm of “belief,” it also ignores the actual mechanism behind creation: vortexya, the dynamo or force-field back of condensation. They say, for example, that the massive energy of a hurricane self-organizes into a huge weather system (see appendix A). But as we will come to see, it is the power of the vortex that drives the hurricane and moves the planet. We recognize that power by its shape: the corkscrew as seen in the spiral nebulae of galaxies or the spiral pattern of a shell. The line of sight to the sun is also spiral; and the Earth’s course through the galaxy is helicoidal, a screwlike path. Michio Kushi called it the “Spiral of Life.”Causation, the very heart of science, has fallen on hard times. Symptoms are celebrated, root causes lost sight of. We will see in later chapters, no actual cause of a big bang, of evolution, of ice ages, of global warming, of planetary influence, and of civilization itself is known. Sunspots are a symptom not a cause: Do sunspots affect terrestrial life? No! This eleven-year cycle is of the earth system, not the sun (sunspots are a sign of that cycle, not its cause). Another example: Do methane and carbon dioxide cause global warming? Many scientists, like Roy W. Spencer, speak of “a natural increase in the CO2 . . . as a result of warming. Note that this is opposite of causation in the theory of man-made global warming. . . . Just as in the case of clouds and temperature, we are once again confronted with the question of cause versus effect” [italics mine]. Spencer goes on to explain:

This is Spencer’s specialty; he is an atmospheric scientist. “We now have published evidence of decreases in cloud cover causing warmer temperatures, yet it has gone virtually unnoticed” [italics mine]. Spencer challenges those who say that man-made global warming has caused more El Niño in recent years.

We are inevitably faced with the problem of closed doors and outright censorship. There is a fine line between the sin of omission and the sin of obstruction. “The students and public are only allowed access to scientific information that is harmless to a tiny handful of powerful scientific tyrants” (Michael Roll, personal communication). Although the twenty-first-⁞century brain trust, our Intelligentsia, is global, conventional wisdom comes to us by way of “the fragile assumptions and cliquish associations upon which presumed truth is often built” (White 1980, 112).
Susan B. Martinez

“Susan Martinez has gifted us with another brilliant work. In a nonthreatening and nonjudgmental manner, Martinez methodically and masterfully presents her thesis that almost everything that we have been taught about our species’ evolution, our planet, and our cosmic origins is totally wrong. With balanced displays of wit, wisdom, and intelligence, Martinez provides the reader with the ‘rise of knowledge from unseen worlds’ and deftly demolishes the ‘delusions’ in conventional and orthodox science and spirituality. This is a must-have book for anyone who wonders about our true history on this planet and the interconnectedness of all life. We highly recommend it.”

“Martinez, trained in the theories of elite universities, has turned the tables on their ill-rooted assumptions. She demonstrates how their conclusions do not match reality. This volume crowns her triad of books that upheave today’s illusionary views about humanity’s origins, place on Earth, and role in the universe. Scholars and other readers thirsty for a new multidimensional cosmology will react to Martinez’s work as a parched straggler seeing an oasis. One will be intellectually nourished and find stepping-stones to a better set of answers to our present mysteries of life.”

“Martinez avoids going too deeply into scientific jargon, making Delusions in Science & Spirituality palatable for a wide audience. Great food for thought and a wonderful reference work, too. I highly recommend this book. It is liberating!”

"…it is a book that deserves to be read closely by all forteans interested in the philosophy of science, ‘reality’ and eschatology."