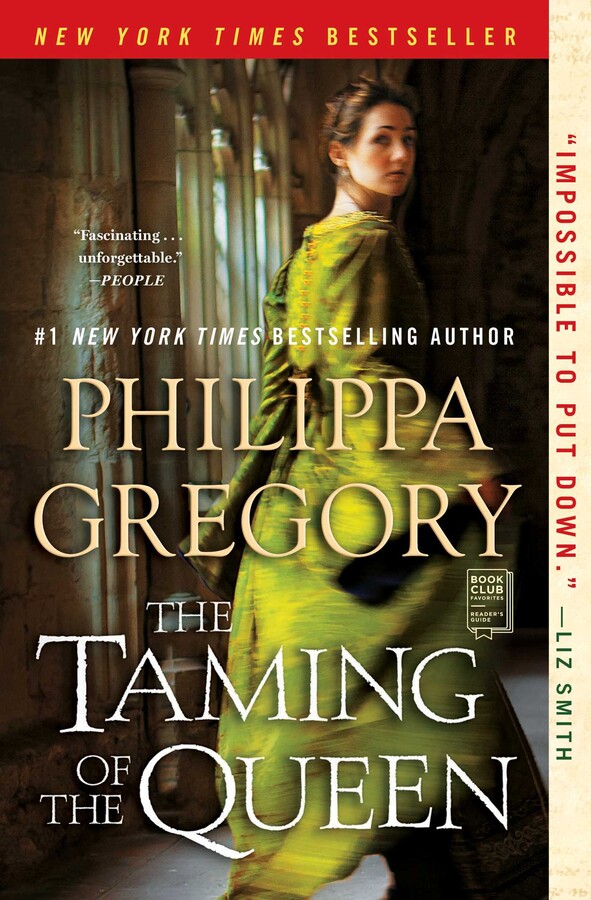 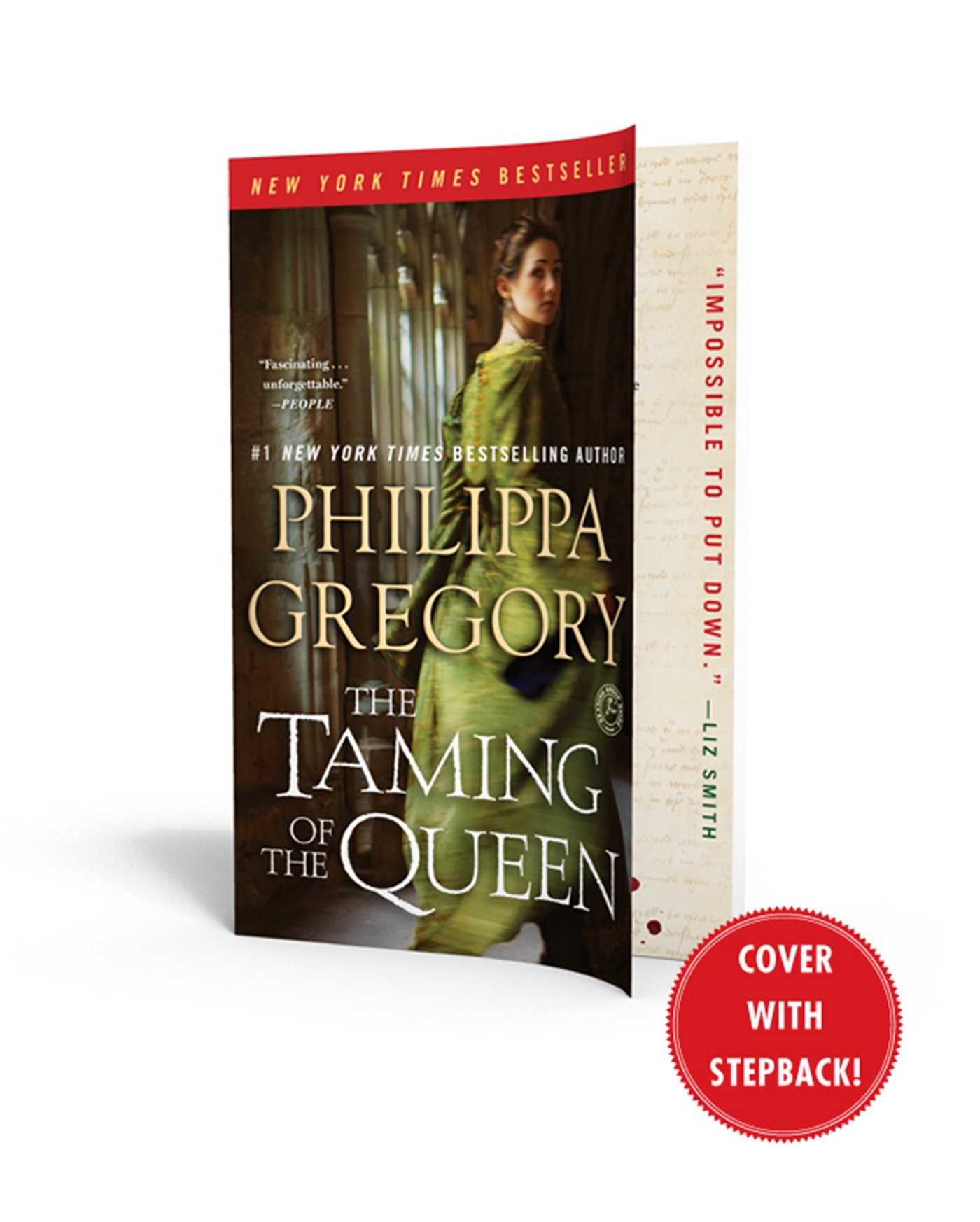 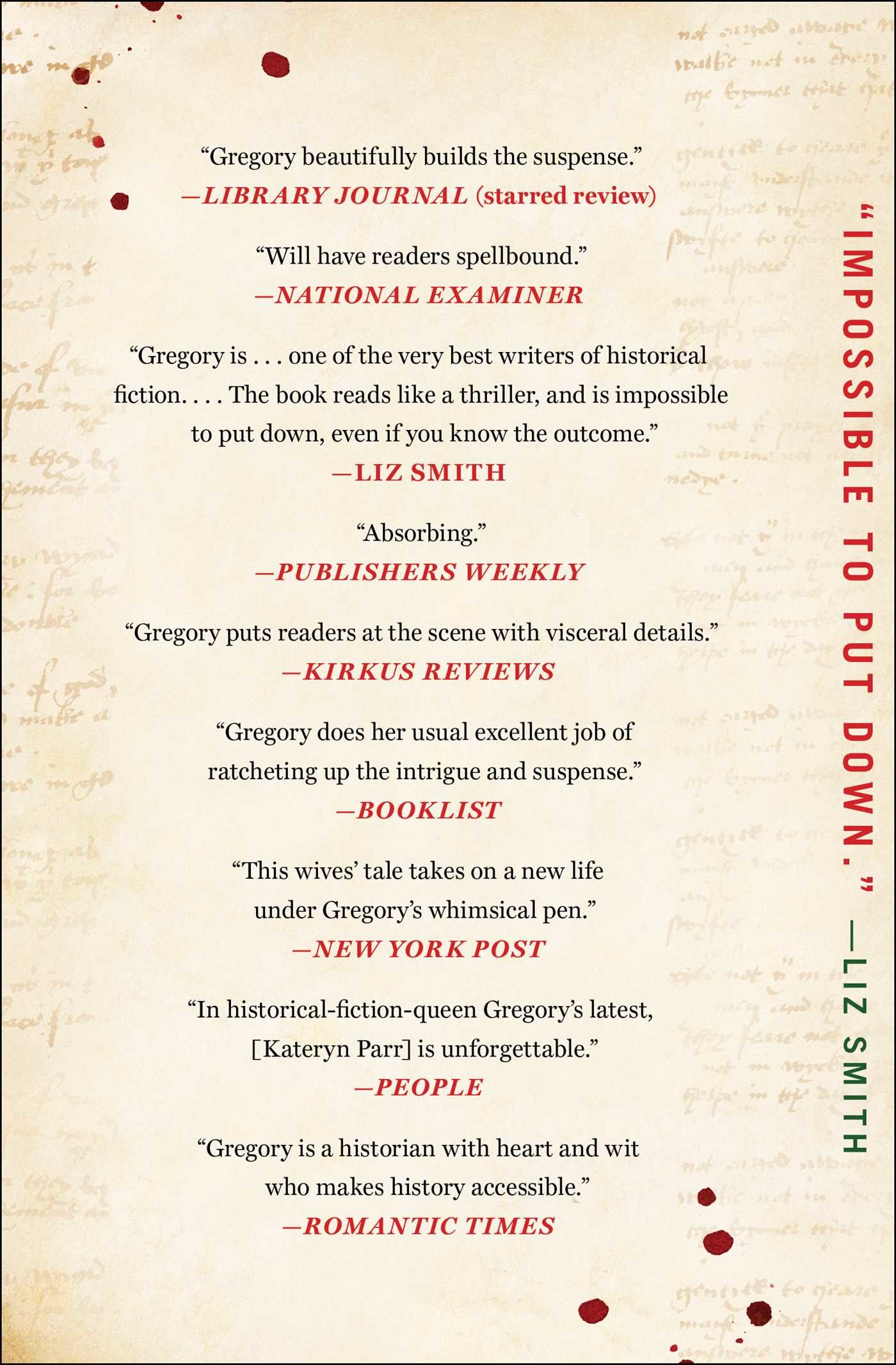 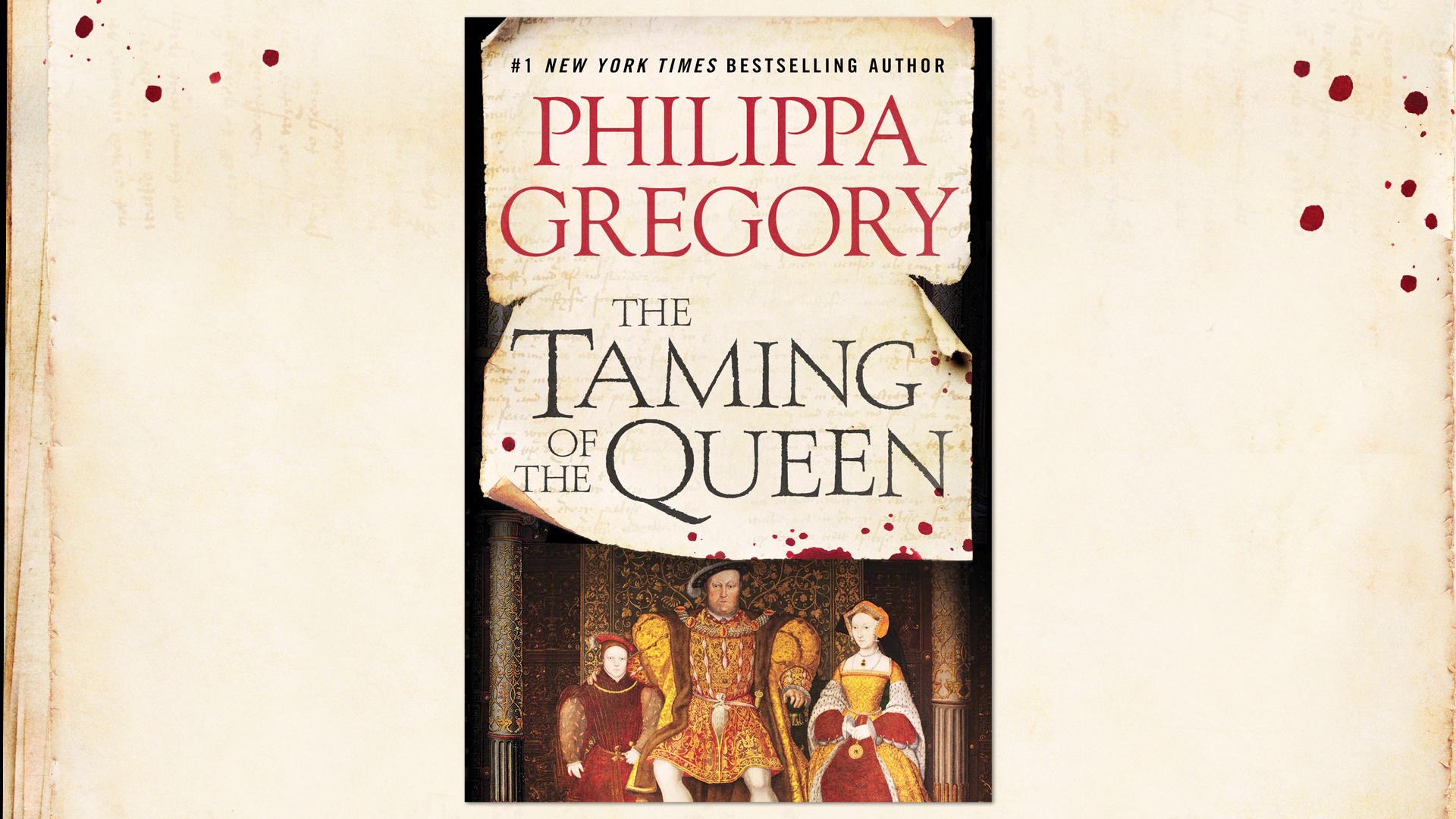 Philippa Gregory Introduces 'The Taming of the Queen' 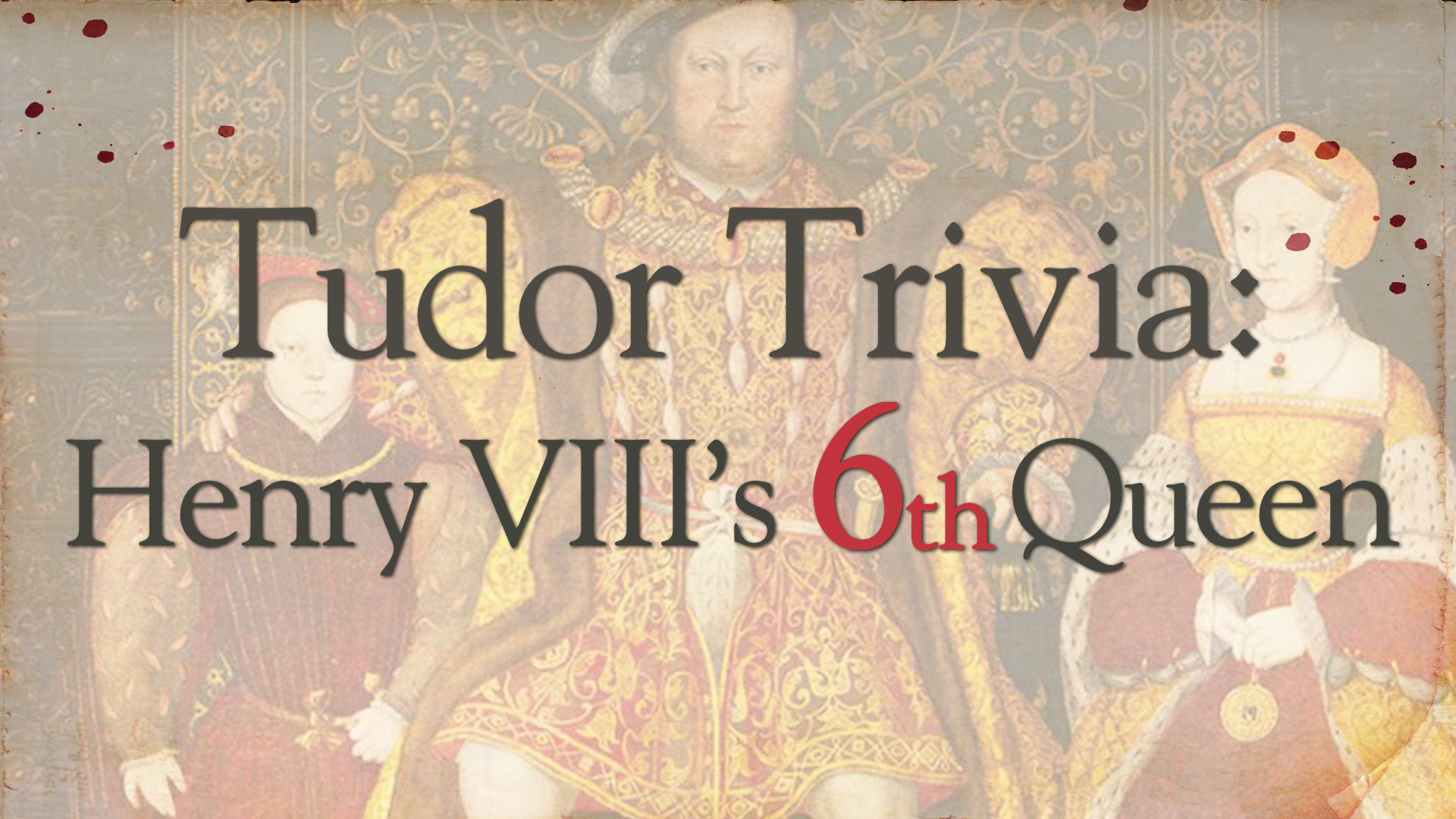 The Taming of the Queen

By the #1 New York Times bestselling author, a novel of passion and power at the court of a medieval killer, a riveting new Tudor tale featuring King Henry VIII’s sixth wife Kateryn Parr.

Kateryn Parr, a thirty-year-old widow in a secret affair with a new lover, has no choice when a man old enough to be her father who has buried four wives—King Henry VIII—commands her to marry him.

Kateryn has no doubt about the danger she faces: the previous queen lasted sixteen months, the one before barely half a year. But Henry adores his new bride and Kateryn’s trust in him grows as she unites the royal family, creates a radical study circle at the heart of the court, and rules the kingdom as Regent.

But is this enough to keep her safe? A leader of religious reform and the first woman to publish in English, Kateryn stands out as an independent woman with a mind of her own. But she cannot save the Protestants, under threat for their faith, and Henry’s dangerous gaze turns on her. The traditional churchmen and rivals for power accuse her of heresy—the punishment is death by fire and the king’s name is on the warrant...

From the bestselling author who has illuminated all of Henry’s queens comes a deeply intimate portrayal of the last: a woman who longed for passion, power, and education at the court of a medieval killer.

Praise for The Taming of the Queen:

"A fascinating history lesson, disguised as a novel, about a wily woman who survives lethal Tudor plots and outlasts a deadly king.”

“Gregory puts readers at the scene with visceral details.”

“Full of vivid details and fraught with the constant tension of a court run by a madman, this novel will appeal most to historical fiction readers and those who enjoyed Wolf Hall. . . . Gregory beautifully builds the suspense.”—Library Journal (starred review)

"Our obsession with Henry and the Tudors continues unabated."

“Gregory does her usual excellent job of ratcheting up the intrigue and suspense as another intelligent and strong-willed heroine fights for her life and her legacy.”—Booklist

"This novel beautifully exemplifies [Kateryn Parr’s] accomplishments while portraying an honest and emotional woman learning to survive in a dangerous royal court.”

“Gregory manages to make history lively, fascinating and real, even as she puts her own twist on what readers believe they know. The impeccable research shows in every page, while her wonderfully realistic dialogue and remarkable characters come to life. Gregory is a historian with heart and wit who makes history accessible.”

"This wives’ tale takes on a new life under Gregory’s whimsical pen.”

"This is the book for your mom, your sister, your colleague who sends you awesome links from Jezebel and The Toast. Get this one."—NPR, Weekend Edition Sunday

Praise for The King's Curse:

“Infuses vitality into an oft-forgotten player in the aftermath of the War of the Roses—Margaret Poole, heiress to the defeated Plantagenet clan.”—Closer

“Margaret’s story is shocking, deeply moving and offers an alternative view on a much-told tale. Gregory is on form here; her depiction of Henry VIII’s transformation from indulged golden boy to sinister tyrant is perfectly pitched and seems more horrific still when we are made intimate witnesses to the devastation of Margaret’s family. . . . I defy anyone to remain dry-eyed as the story reaches its tragic denouement.”—The Sunday Express (UK)

“[A] gripping and detailed chronicle, with plenty of court intrigue and politics to spice up the action . . . . Highly recommended.” —Library Journal (starred review)

"Gregory manages to keep us in suspense as to what will befall her characters....Under [her] spell, we keep hoping history won't repeat itself.”—Kirkus Reviews

"An illuminating portrait. . . Gregory moves confidently through a tangle of intrigue, revenge, and tyranny toward a shocking betrayal."—Publishers Weekly

"Loyalties are torn, paranoia festers and you can almost hear the bray of royal trumpets as the period springs to life. It’s a bloody irresistible read."—People

Praise for The White Princess:

“This rich tapestry brings to vivid life the court of Henry and Elizabeth. Meticulously drawn characters with a seamless blending of historical fact and fiction combine in a page-turning epic of a story. Tudor-fiction fans can never get enough, and they will snap this one up.”—Library Journal (starred review)

"The White Princess features one of the more intriguing theories about the possible fate of the princes."—The Washington Post

“The queen of royal fiction.”—USA Today

The Taming of the Queen