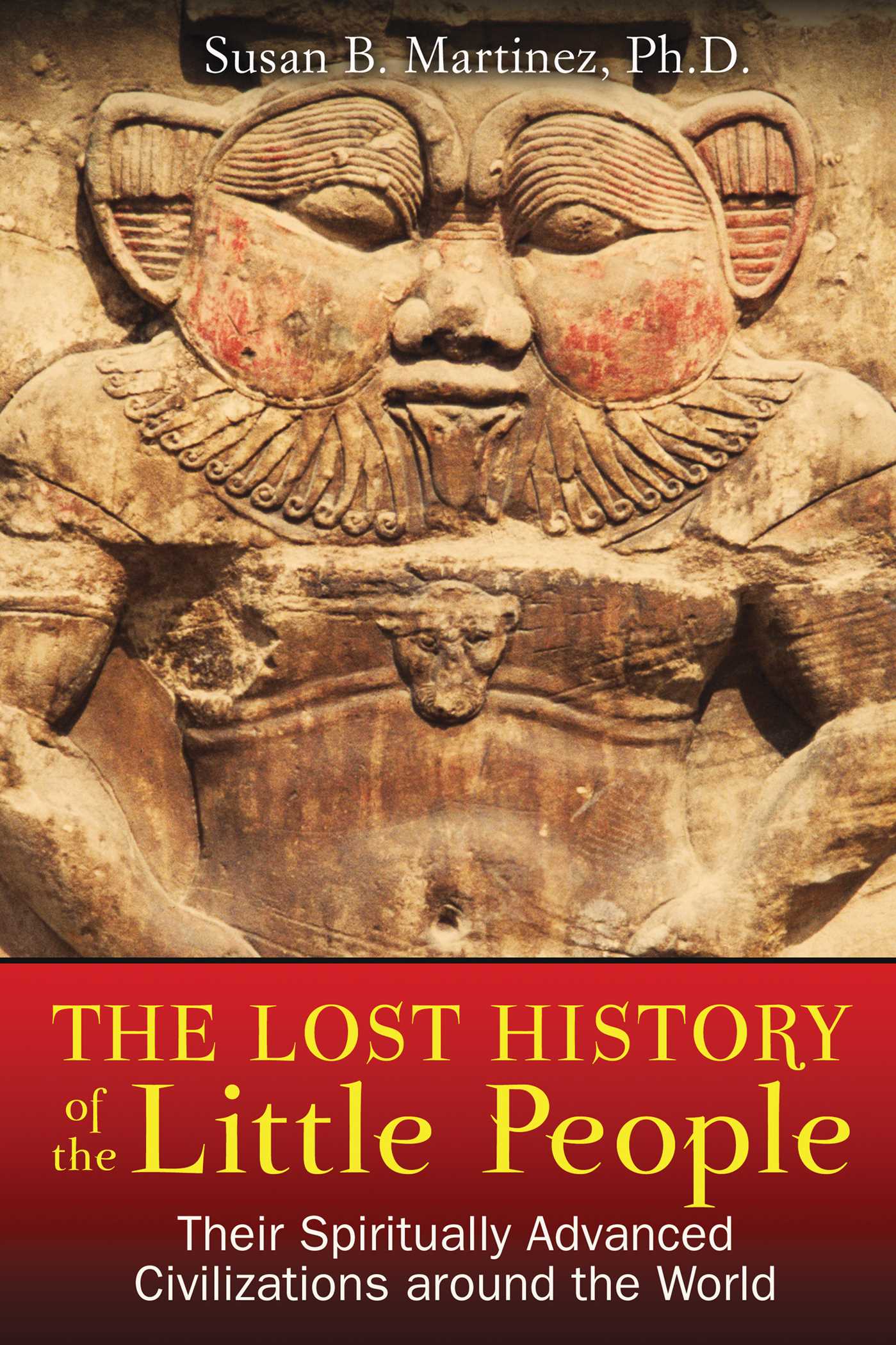 By Susan B. Martinez
Published by Bear & Company
Distributed by Simon & Schuster
LIST PRICE $12.99
PRICE MAY VARY BY RETAILER

Reveals an ancient race of Little People, the catalyst for the emergence of the first known civilizations

• Traces the common roots of key words and holy symbols, including the scarlet biretta of Catholic cardinals, back to the Little People

• Includes the Tuatha De Danaan, the Hindu Sri Vede, the dwarf gods of Mexico and Peru, the Menehune of Hawaii, the Nunnehi of the Cherokee as well as African Pygmies and the Semang of Malaysia

All cultures haves stories of the First People, the “Old Ones,” our prehistoric forebears who survived the Great Flood and initiated the first sacred traditions. From the squat “gods” of Mexico and Peru to the fairy kingdom of Europe to the blond pygmies of Madagascar, on every continent of the world they are remembered as masters of stone carving, agriculture, navigation, writing, and shamanic healing--and as a “hobbit” people, no taller than 31/2 feet in height yet perfectly proportioned.

Linking the high civilizations of the Pleistocene to the Golden Age of the Great Little People, Susan Martinez reveals how this lost race was forced from their original home on the continent of Pan (known in myth as Mu or Lemuria) during the Great Flood of global legend. Following the mother language of Pan, Martinez uncovers the original unity of humankind in the common roots of key words and holy symbols, including the scarlet biretta of Catholic cardinals, and shows how the Small Sacred Workers influenced the primitive tribes that they encountered in the post-flood diaspora, leading to the rise of civilization. Examining the North American mound-culture sites, including the diminutive adult remains found there, she explains that these stately mounds were not burial sites but the sanctuaries and homes of the Little People.

Drawing on the intriguing worldwide evidence of pygmy tunnels, dwarf villages, elf arrows, and tiny coffins, Martinez reveals the Little People as the real missing link of prehistory, later sanctified and remembered as gods rather than the mortals they were.

CHAPTER 1
The Old Ones

1828: Ten years before the infamous Exile of the Eastern Cherokee (the “Trail of Tears,” which calamity the prescient Little People had foretold), Tennessee newspapers began reporting the discovery of remarkable burial grounds in both Sparta and White Counties. “Very little people,” according to a later account in Harper’s Magazine (July 1869), “had been deposited in coffins of stone . . . the bones were strong and well set, and the whole frames were well formed . . .” Then, Smith County joined the controversy with more finds of well-formed skeletons measuring three feet in length.

In light of these unusual burials (found almost two hundred years before the touted “hobbit” of Java), isn’t it time for archaeologists and folklorists to get together and connect the dots? For we have every reason to believe it was the remains of the early moundbuilders that were found in those southern tombs. Yet these diminutive sarcophagi were dismissed out of hand as the graves of “newborn infants” or small children--or even small animals! (American Antiquarian, 1901). How about that?! A race of small children! Or stone coffins--for animals . . .

By 1980, though, a controversial Harvard paleontologist named Barry Fell, reconstructing thousands of these Tennessee cranial fragments (from 600 burials), found that the teeth showed “complete development and severe wear,” proving the skulls to be from middleaged adults. Fell, moreover, was able to match these Tennessee skulls with look-alikes in the Philippines--a good hint of Homo pygmaeus’ once widespread distribution in the world. Indeed, another writer linked these Tennessee (plus related Kentucky and Ohio) specimens to similar ones in Malaysia, Fiji, and the Sandwich Islands: their common artifacts “clearly of a Polynesian character. . . . The North Americans, Polynesians, and Malays were formerly the same people, or had one common origin.” And that common origin, orbiting Polynesia, will be a major thread of this book as we move toward the rediscovery of Pan--the lost homeland of the little people--in the Pacific.

Nevertheless, writers like Joseph Jones, Ph.D., in his book Explorations of the Aboriginal Remains in Tennessee (1901), thought he “thoroughly refuted . . . the pigmy theory.” His opinion, however, didn’t stop the White, Sparta, and Smith County finds from being joined now by a far vaster “pigmy graveyard” at Hillsboro, Tennessee (Coffee County). A man had been plowing his field and turned up a small skull and other bones. Further investigation revealed six acres of graveyard, with skeletons either in sitting or standing positions. “The bones show that they were a dwarf tribe . . . about three feet high. It is estimated that there were about 75,000 to 100,000 buried there.”

So let’s connect the dots: One of the Sparta County skeletons, lying on its back with hands on chest, had about its neck ninety-four pearl beads. We might suppose he was the spiritual head or priest of these little people; for in “aftertime,” the Cherokee shaman, adawehi, adorned himself with a like pectoral of shining river pearls, symbolizing the secrets of the stars, the spirit-helpers, and the Immortals (Nunnehi).

Adawehi is an interesting word that denotes not only the shaman himself (Cherokee), but all that is divine, encompassing the invisible world that permeates and empowers the living. The term applies as well to the shaman’s familiar spirits who can be invoked for assistance; but all men, animals, plants--all tribes of the living--are infused to some degree with adawehi. The eagle is a great adawehi, and his feathers may only be carried by the most acclaimed medicine men. The Nunnehi people were abundantly adawehi. These little men could assume various shapes at will, or even become invisible.

Were they magical beings? “An ignorant people,” wrote John Lubbock in Pre-historic Times, “living by the side of a more civilized race . . . attribute their superiority to magical arts.” Just so, magical Little Men were remembered, as recorded in the famous volume Corps of Discovery, detailing the Jeffersonian expedition to the unknown West. On August 25, 1804, Meriwether Lewis and William Clark happened to camp on a hill near the Teton River (Kansas). The “hill” was actually a mound, man-made. Here, the explorers learned that the Dakota Indians called the place Mountain of the Little People, or Spirit Mound. The original inhabitants were, according to the elders, People of Another World, so enlightened, so spiritual in nature--not unlike the fairies of European lore.

And so it is, inevitably, to Ireland that we turn for light on the fairies--the wee people. Like their congeners in Cherokee country, the grogachs or brownies (Ulster, Ballycastle, Shetland, and so forth) work diligently helping the farmers in their cornfields. In Northeast Antrim the supernatural ways of the grogachs are well known; while the Sidhe, the fairylike Tuatha De Danaan, were renowned for their wizardry and magic; their very name implies “enchanted.” Said to know the secrets of heaven, they could cause storms and cast spells; they are witches’ familiars, tutoring them in all the magical arts. The romance of Lancelot calls all those women Fays or fées who had to do with enchantments and charms, who knew the power and virtue of words, stones, and herbs. The korrigan, another type of these phantasmagorical little people, can predict the future, assume any form they please, and move from place to place with the rapidity of thought.
Susan B. Martinez

“Tales and legends of the wee folk, or little people, are numerous around the world. At times they are reportedly meddlesome, but always very mysterious. Through her extensive research into the subject matter, Susan Martinez, Ph.D., establishes the little people as the progenitor of civilization and one of the ancestors of the people of today.”

– Jack Churchward, author of Lifting the Veil on the Lost Continent of Mu, Motherland of Men

“Those who have read any of Susan Martinez’ prior works know her to be a consummate story teller, an encyclopedia of knowledge pertinent to her subjects, and one, bolstered by her beliefs, unafraid to shoot detractors from the hip, hence The Lost History of the Little People will not disappoint. For those new to her style and content, attracted by the subject, you can expect a panoramic guided tour of countries, civilizations and cultures, replete with facts, fables, figures and illustrations.”

“Susan Martinez has amassed more information in a single volume about the so-called little people than any other research of its kind. This new book offers invaluable, otherwise obscure, resource materials in a presentation as thorough as it is engaging.”

– Frank Joseph, author of Atlantis and 2012, The Lost Civilization of Lemuria, and Advanced Civilizati

By Susan B. Martinez
Published by Bear & Company
Distributed by Simon & Schuster
LIST PRICE $12.99
PRICE MAY VARY BY RETAILER