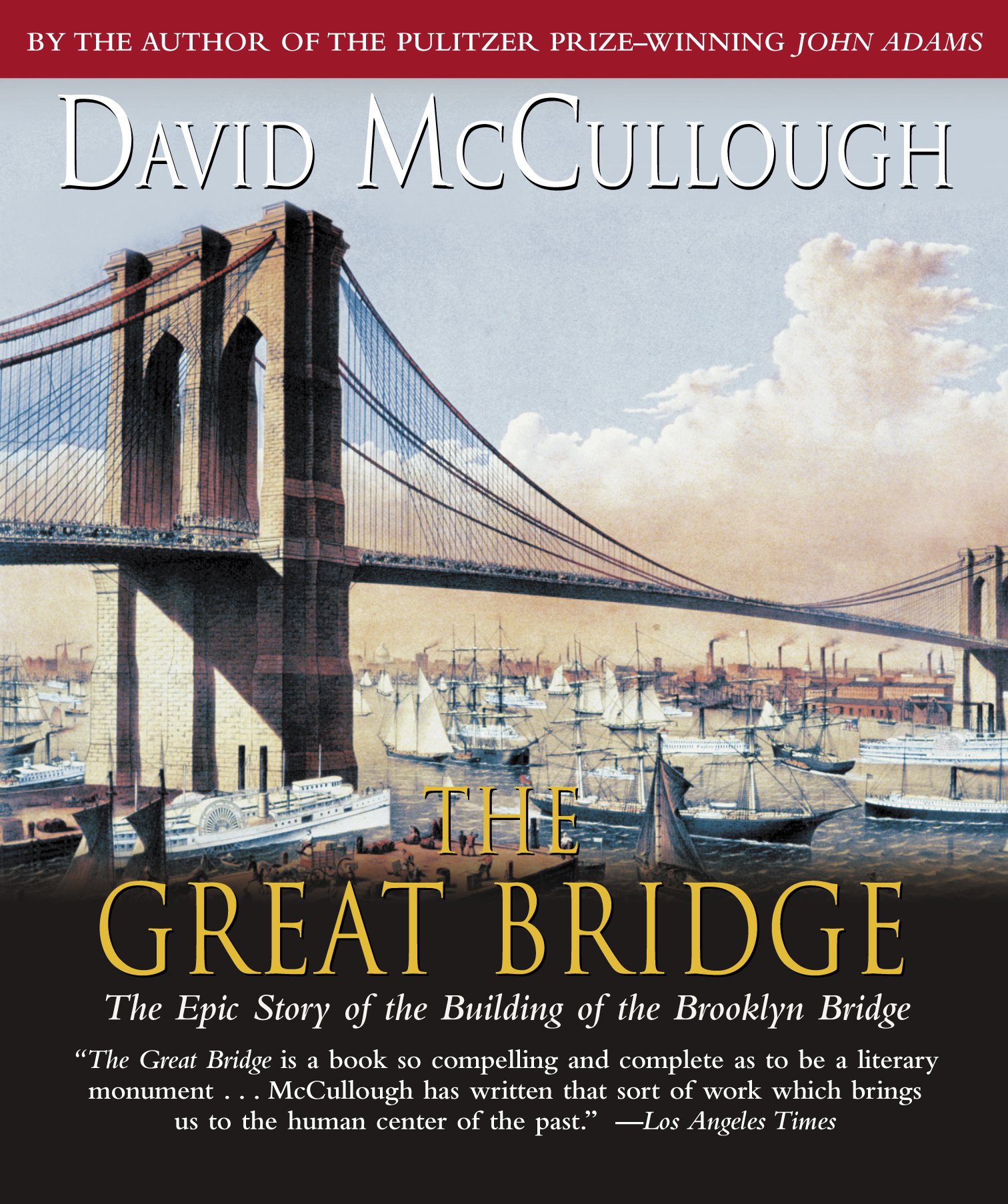 The dramatic and enthralling story of the building of the Brooklyn Bridge, the world’s longest suspension bridge at the time, a tale of greed, corruption, and obstruction but also of optimism, heroism, and determination, told by master historian David McCullough.

This monumental book is the enthralling story of one of the greatest events in our nation’s history, during the Age of Optimism—a period when Americans were convinced in their hearts that all things were possible.

In the years around 1870, when the project was first undertaken, the concept of building an unprecedented bridge to span the East River between the great cities of Manhattan and Brooklyn required a vision and determination comparable to that which went into the building of the great cathedrals. Throughout the fourteen years of its construction, the odds against the successful completion of the bridge seemed staggering. Bodies were crushed and broken, lives lost, political empires fell, and surges of public emotion constantly threatened the project. But this is not merely the saga of an engineering miracle; it is a sweeping narrative of the social climate of the time and of the heroes and rascals who had a hand in either constructing or exploiting the surpassing enterprise.

The Great Bridge by David McCullough
Reader's Group Guide
1. In 1869, conversations about the Brooklyn Bridge took a more serious tone and there was much opposition. "The bridge... was a monumental extravagance, a wild experiment, nothing but an exercise in vanity." If a less expensive medium for transportation, such as a tunnel, would adequately increase transportation between Brooklyn and Manhattan, why build a bridge of this magnitude? Is there something to be said for grandiose monuments and landmarks?
2. John A. Roebling did not practice organized religion. Like many intellectuals of the time his beliefs were based in spiritualism. Why do you think spiritualism appealed to "practical men of learning"? Do you feel that science and religion is mutually exclusive? How does spiritualism relate to Scientology and other alternative forms of spiritual practice?
3. Prior to the completion of the bridge, you get a sense that Brooklyn is a strong, self-sufficient town. "New York [City] employed considerably less than half of Brooklyn's wage earners, perhaps even as few as one in three." If that is the case, what is the strongest argument for building the bridge? What are the pros and cons of further developing Brooklyn into the "biggest city in the world"?
4. William Tweed was arguably the most powerful and influential man in New York politics. His "Tweed Ring" was built on a system that exorbitantly inflated public expenditures on construction contracts. How were Tweed and the Tweed Ring brought to justice? Can you site similar examples of his organized embezzlement in current local and national politics?
5. The "bends", drastically took its toll on the bridge workers who sunk the New York caisson. What explanations of the disease were the most far-fetched? After the New York caisson was dropped, Colonel Roebling claimed that, "just two deaths could be charged directly to the effects of pressure." Why do you think Roebling botched his final report? If you were in Roebling's position would you have interrupted the project until developing a mechanism such as the "hospital lock" to ensure the safety of the bridge workers?
6. In January of 1875, Henry Ward Beecher, pastor of Plymouth Church was accused of committing adultery with Theodore Tilton's wife. Although it was clear to the general public that Beecher was guilty, the functions of the church continued as usual, and no one was reported to have abandoned the church. McCullough writes, "a great many people who thought Beecher might be guilty after all would continue to regard him as an extraordinary human being and felt he suffered more than enough." What is your opinion on the sexual misconduct of political and/or religious figures, and the public's treatment of such scandal? Should political and/or religious figures be held to a higher standard of morality? Explain.
7. William Roebling's health began to deteriorate to the extent that he rested at home and conducted his responsibilities as Engineer-in-Chief through correspondence via his wife. With mounting medical and person expenses that outweighed his $10,000 salary, what is Roebling's driving motivation and commitment to the bridge? Have you or anyone you know been so dedicated to a passion that hard work led to the denial of health and personal wellbeing? Share your experience. Is that kind of dedication frowned upon or encouraged by today's culture?
8. After E.F. Farrington was the first to cross the Brooklyn Bridge, his pioneering effort became a huge spectacle and he became a media sensation. Do you think he felt guilty receiving so much attention when Roebling was working from his sickbed? Why did the act of being the first to cross the bridge garner more media attention than the individual whose expertise carried the bridge to fruition?
9. In a dispute over the Bessimer steel contract, why was Hewitt personally invested in discrediting Roebling despite his attempt to remain out of the public arena?
10. When workmen were digging foundations for the Brooklyn approach, the Eagle published an essay on the bridge as "the coming place for the truly artistic suicide." During this time, what did the bridge symbolize in terms of birth, death, triumph, and spectacle?
11. In 1882, the bridge was just about complete. McCullough writes, "for the first time since his father's death... Roebling could relax a little... his services were no longer vital." At this point, why didn't Roebling step down from his position as Engineer-in-Chief, and name a successor to complete the bridge? What did he have to loose?
12. In 1883, the bridge was finally complete. As a response to Hewitt's presentation of the bridge as a great symbol of progress, Roebling writes, "the advantages of modern engineering are in many ways balanced by the disadvantages of modern civilization." What are those disadvantages? Do you agree with this statement? Explain.

"The Great Bridge is a book so compelling and complete as to be a literary monument. . . . McCullough has written that sort of work which brings us to the human center of the past."
—Los Angeles Times