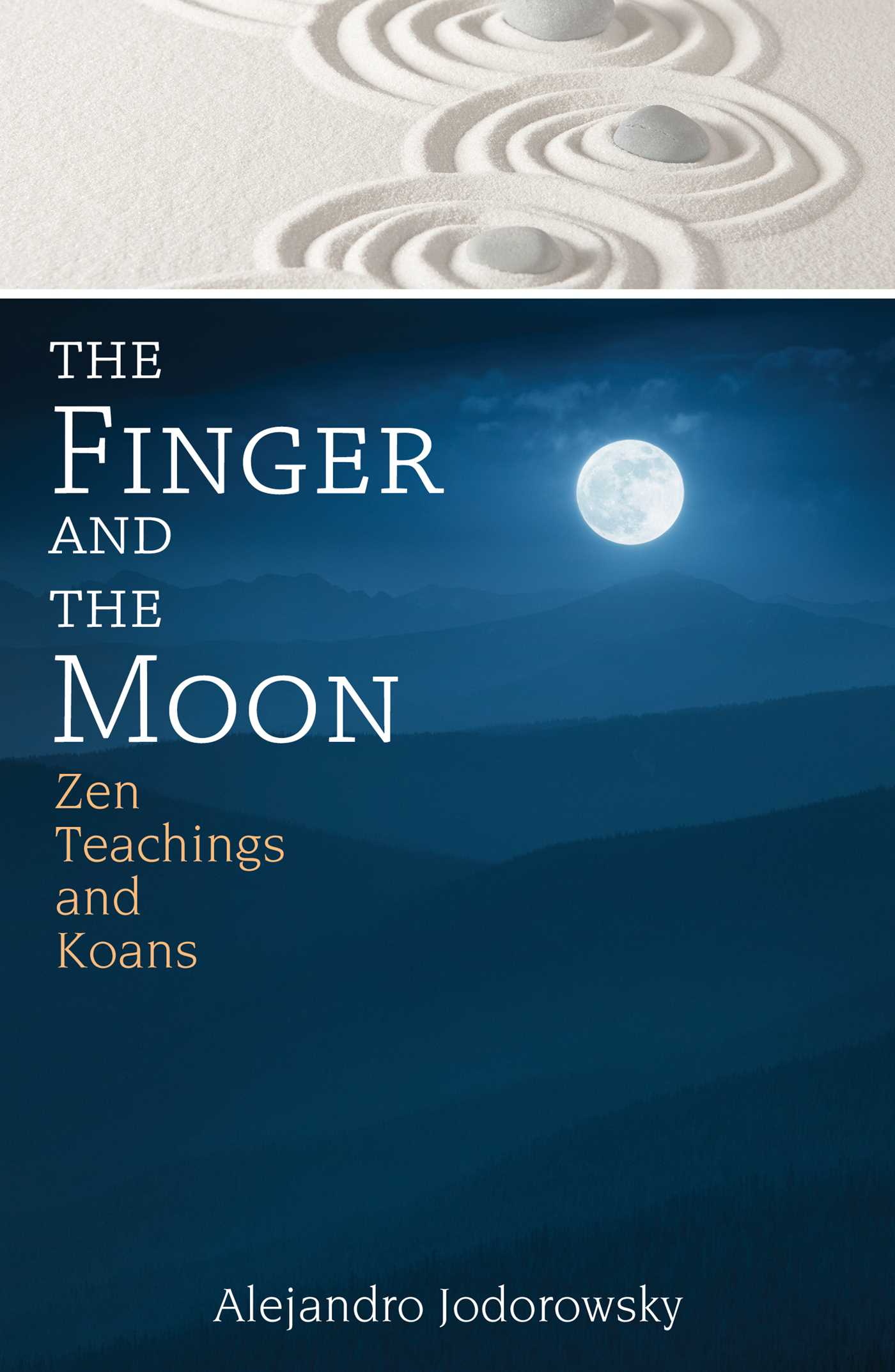 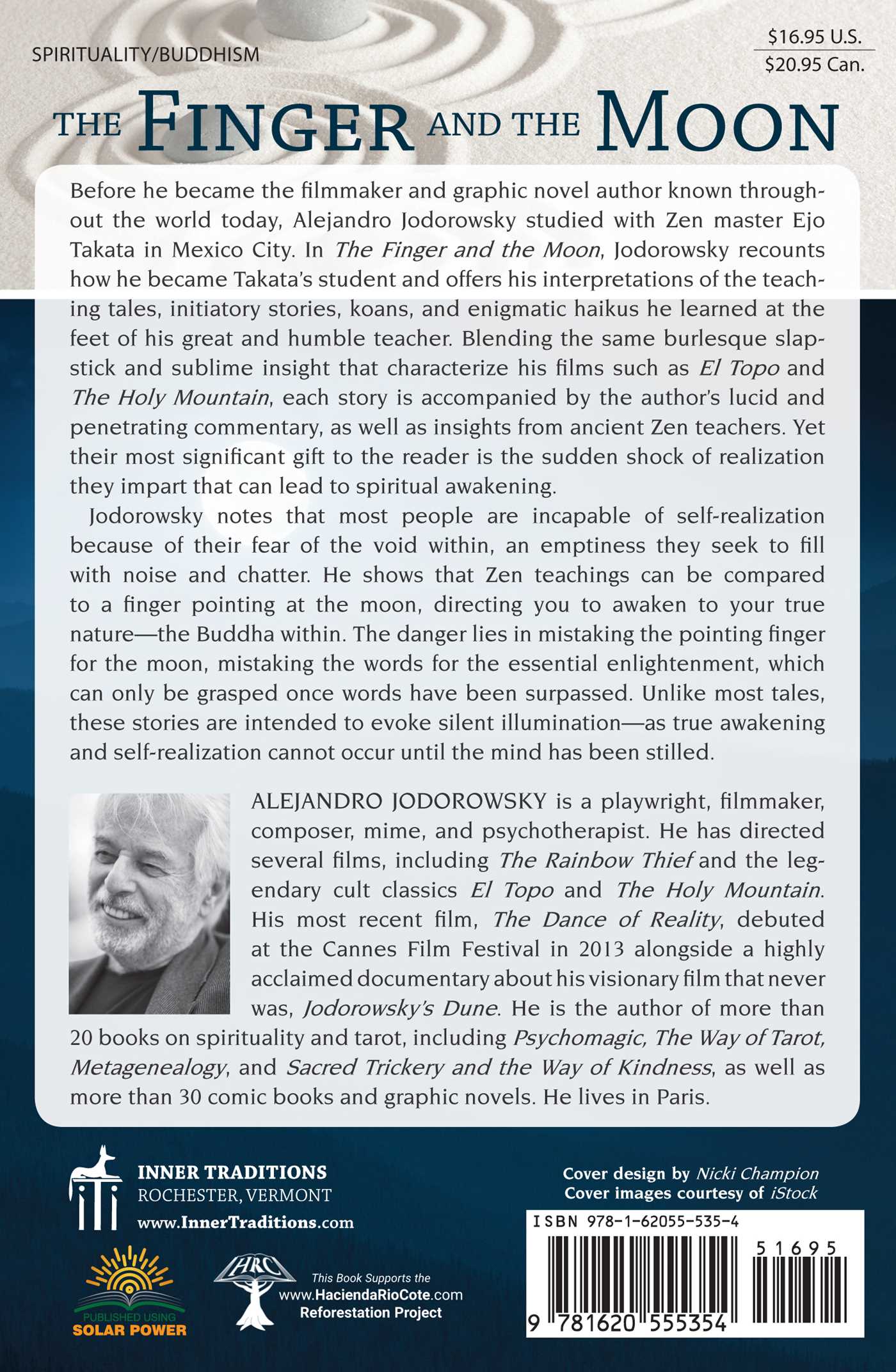 By Alejandro Jodorowsky
LIST PRICE $16.95
PRICE MAY VARY BY RETAILER

• Each story or koan is accompanied by the author’s lucid and penetrating commentary, blending the same burlesque slapstick and sublime insight that characterize his films

Before he became the film maker and graphic novel author known throughout the world today, Alejandro Jodorowsky studied with Zen master Ejo Takata in Mexico City. In The Finger and the Moon, Jodorowsky recounts how he became Takata’s student and offers his interpretations of the teaching tales, initiatory stories, koans, and enigmatic haikus he learned at the feet of his great and humble teacher. Blending the same burlesque slapstick and sublime insight that characterize his films such as El Topo and The Holy Mountain, each story is accompanied by the author’s lucid and penetrating commentary, as well as insights from ancient Zen teachers. Yet their most significant gift to the reader is the sudden shock of realization they impart that can lead to spiritual awakening.

Jodorowsky notes that most people are incapable of self-realization because of their fear of the void within, an emptiness they seek to fill with noise and chatter. He shows that Zen teachings can be compared to a finger pointing at the moon, directing you to awaken to your true nature--the Buddha within. The danger lies in mistaking the pointing finger for the moon, mistaking the words for the essential enlightenment, which can only be grasped once words have been surpassed. Unlike most tales, these stories are intended to evoke silent illumination--as true awakening and self-realization cannot occur until the mind has been stilled.

During the late fifties, Zen master Yamada Mumon sent his disciple Ejo Takata from Japan to visit a North American zendo in San Francisco. Once there, Takata looked for a place to start a Zen Rinzai school. His method of looking for it--he spoke only Japanese--consisted in not looking for it. He stood still at the edge of the road and decided that he would get established wherever the first vehicle to pick him up left him. It was a truck that carried oranges that left him in Mexico City. He found himself there, with no more clothes than his koromo, and with ten dollars in his pocket. In that immense city he wandered through the streets until a psychoanalyst stopped his car and invited him in. He was surprised--or more precisely, astonished--to see a Japanese man calmly wandering around the streets of Mexico City. The psychoanalyst considered Ejo Takata’s arrival as a major event in the development of his own school; and with a group of physicians and other psychoanalysts, he had the man who would eventually become my master installed in a zendo in the outskirts of the capital.

A Zen master used to say: “When some people have to cross the river on a raft, they begin their passage, but soon after they lose sight of their goals. They stay at the raft: it has become their end.”

Others think that the goal is making money. The goal is happiness. We have to make money with something we truly love, something we love with passion. We could say that we should do things that give us intense pleasure, so much that we would do them for free.

Money is a divine energy. That said, in our society it is considered the worst thing there is. And yet we’re bound to use it to get by, to earn it, and to spend it. Why feel guilty when you earn a lot? It’s not hard for me to imagine Christ blessing the world with a five-hundred-dollar bill in his hand.

A samurai asked a master to explain to him the difference between heaven and hell. Without responding, the master started to confer a great amount of insults at him. The samurai furiously drew his sable [weapon] to behead him.

“There you have hell,” said the master before the samurai could execute the action. Impressed by these words, the warrior instantly calmed down and sheathed his sable.

As he did this last gesture, the master added: “There you have heaven.”

In koans, master and disciple are usually together. I can imagine the master completely calm and relaxed, and the disciple tense and nervous. If the guru is nervous and controls himself, it means that he’s not a real master. He’s a disciple. On the other hand, if he scratches his butt, he’s a master. When the normal and ordinary man learns, he becomes a wise man, and when a wise man learns, he becomes a normal and ordinary man.

“Master, I am afraid of dying. Can you help me solve that problem?”

Die so that you won’t die! Annihilate your ego, your individual I! Only the death of the individual exists. Neither the Totality nor Life ever ends. To be eternal, burst out your ego.

At night, especially at that moment when I can’t fall asleep, I practice an exercise. I say: “From now on, I will stop thinking.”

I relax and after a while my thinking gets dissolved. So I add: “And now? Now, I surrender to nothingness. I am nothing.”

I get into this idea but I end up telling myself: “Don’t be sad either! Abandon yourself to the situation! Enter into the nothingness! Accept it!”

After a few seconds, I sleep profoundly. It seems as though we fall asleep at the moment we accept nothingness because the intellect disappears. When you annihilate the intellect, you sleep: you enter into the Universe.

A master tells his disciple: “No one has ever achieved enlightenment,”

I must forgo my wish to keep my life and my idea not to keep it. It’s the lily that matters, not my wish to use it. We must live in this world without wishing to use it, being happy with yourself just like the lily, the humble lily.

The kitten
weighed at the scale
keeps playing.

The kitten remains the same, whether we weigh him or not. He doesn’t care if he’s good, bad, fat, or slim. He keeps on playing! As we say: “As long as I’m warm let people laugh.” Why would I care if people laugh at me if I’m warm and cozy?” We want to be accepted by others. We live for them, perpetually changing ourselves, but in fact if we feel good with ourselves, everything works!
Alejandro Jodorowsky

“No one alive today, anywhere, has been able to demonstrate the sheer possibilities of artistic invention--and in so many disciplines--as powerfully as Alejandro Jodorowsky.”

“Alejandro Jodorowsky is a demiurge and an interpreter of our stories, always exploring further the understanding of both the beauty and complexity revealed by humankind.”

“Jodorowsky is a brilliant, wise, gentle, and cunning wizard with tremendous depth of imagination and crystalline insight into the human condition.”

“Alejandro Jodorowsky seamlessly and effortlessly weaves together the worlds of art, the confined social structure, and things we can only touch with an open heart and mind.”

“One of the most inspiring artists of our time. . . . A prophet of creativity.”

“The Dance of Reality begs to be read as a culminating work. . . .”

“The Dance of Reality [film] is a trippy but big-hearted reimagining of the young Alejandro’s unhappy childhood in a Chilean town. . . .”

“Manual of Psychomagic is great . . . like a cookbook of very useful recipes that can help us to understand our life and the universe we live in.”

“His films El Topo and The Holy Mountain were trippy, perverse, and blasphemous.”

“The best movie director ever!”

By Alejandro Jodorowsky
LIST PRICE $16.95
PRICE MAY VARY BY RETAILER