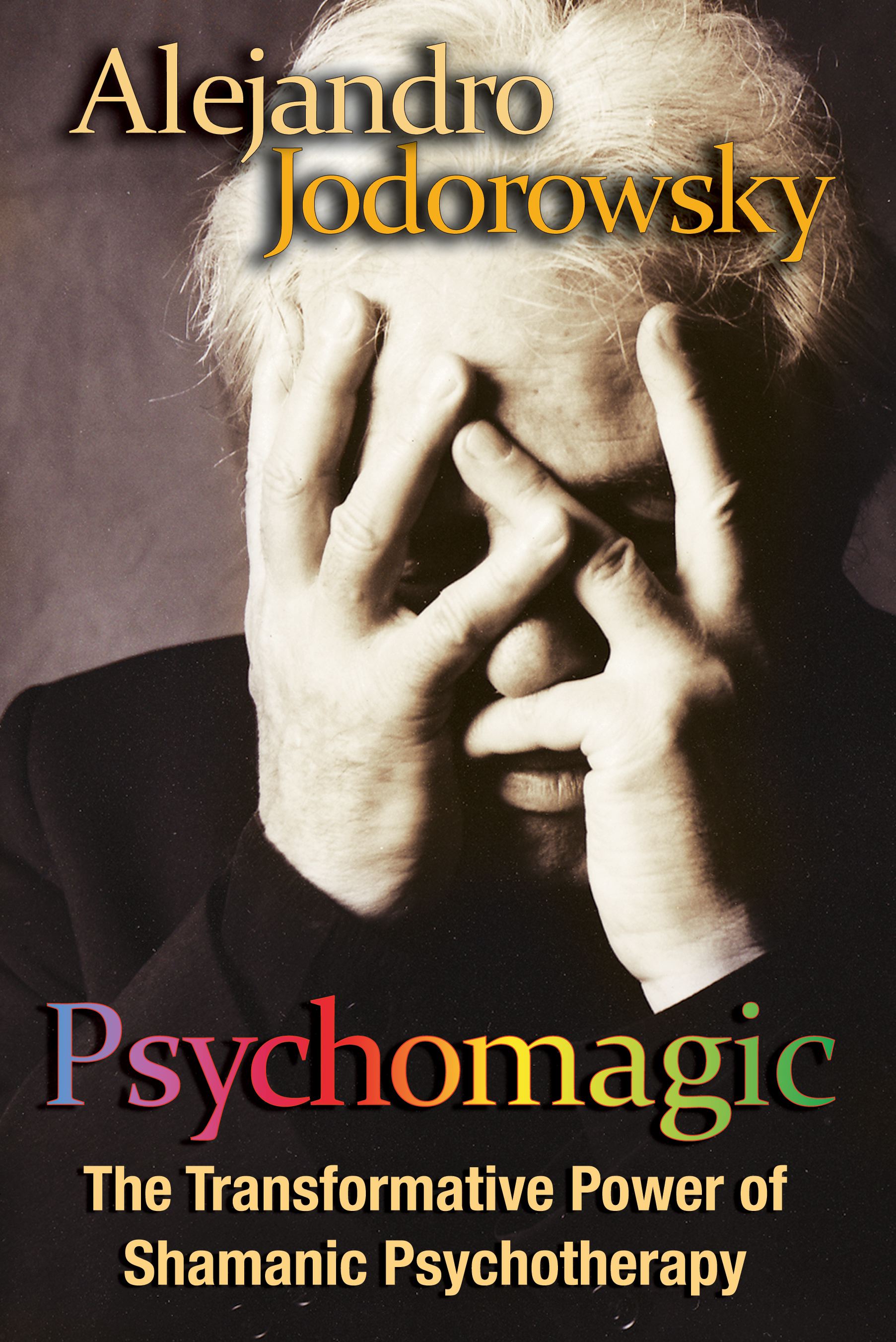 By Alejandro Jodorowsky
LIST PRICE $24.99
PRICE MAY VARY BY RETAILER

A healing path using the power of dreams, theater, poetry, and shamanism

While living in Mexico, Alejandro Jodorowsky became familiar with the colorful and effective cures provided by folk healers. He realized that it is easier for the unconscious to understand the language of dreams than that of rationality. Illness can even be seen as a physical dream that reveals unresolved emotional and psychological problems.

Psychomagic presents the shamanic and genealogical principles Jodorowsky discovered to create a healing therapy that could use the powers of dreams, art, and theater to empower individuals to heal wounds that in some cases had traveled through generations. The concrete and often surreal poetic actions Jodorowsky employs are part of an elaborate strategy intended to break apart the dysfunctional persona with whom the patient identifies in order to connect with a deeper self. That is when true transformation can manifest.

For a young man who complained that he lived only in his head and was unable to grab hold of reality and advance toward the financial autonomy he desired, Jodorowsky gave the prescription to paste two gold coins to the soles of his shoes so that all day he would be walking on gold. A judge whose vanity was ruling his every move was given the task of dressing like a tramp and begging outside one of the fashionable restaurants he loved to frequent while pulling glass doll eyes out of his pockets. The lesson for him was that if a tramp can fill his pockets with eyeballs, then they must be of no value, and thus the eyes of others should have no bearing on who you are and what you do. Taking his patients directly at their words, Jodorowsky takes the same elements associated with a negative emotional charge and recasts them in an action that will make them positive and enable them to pay the psychological debts hindering their lives.

Having lived many years in Mexico, I had the opportunity to study the methods of those called “witches” or “folk healers.” They are legion. Every neighborhood has one. Rising up in the heart of Mexico City, is the great Sonora market, which sells exclusively magic products: colored candles, dissected fish shaped in the form of the devil, images of saints, medicinal plants, blessed/holy soaps, Tarots, charms, plaster sculptures of the Virgin of Guadalupe turned into skeletons, and so on. In some back rooms plunged in semidarkness, women with a triangle painted on their foreheads rub bunches of herbs and blessed water on those who are there for consultations; they practice “cleansing” the body and the aura. . . . The professional doctors, faithful sons of the university, despise these practices. According to them, medicine is a science. They would like to find a precise, ideal remedy for every illness, and to not differentiate one from the other depending on who has it. Patients are treated only as bodies. These doctors do not propose to cure the soul. Contrarily, medicine, to folk healers, is an art.

It is easier for the unconscious to understand dream language than rational language. From a certain point of view, illnesses are dreams, messages that reveal unresolved problems. The “folk healers” develop personal techniques with great creativity: ceremonies, spells, strange medicines such as café au lait laxatives, rusty screw infusions, or animal excrement tablets. Some have more imagination or talent than others, but all, if consulted with faith, are useful. They speak to the primitive and superstitious individual, whom we all carry inside.

Watching these popular therapists operate, often performing miracles using the honorable tricks of a skilled magician, I came up with the notion of the “sacred trap.” For the extraordinary to occur, it is necessary for the sick to firmly believe in the possibility of a cure and accept the existence of miracles. Once the sacred trap tricks the person seeking consultation, he experiences an interior transformation that permits him to capture the world by way of the intuition rather than by reason. It is only this way that a true miracle can take place.

But I asked myself at that moment: If one eliminates the sacred trap with this artistic therapy, could a person cure another without faith? At every moment the unconscious exceeds the limits of our reason, whether by way of dreams or by futile acts. A particular incident that occurred in one of my psycho-genealogy courses indicated the way to me: at the moment in which I described the causes for the neurosis, a medical student of surgery fell on the floor twisting with painful spasms. It seemed like an epileptic seizure. In the middle of general panic, without anyone knowing how to help him, I went over to the inflicted person and, without knowing why, I removed, with a lot of trouble, his wedding band from the ring finger of his left hand. Immediately, he calmed down. I noticed that the objects that surround and accompany us form part of the language of the unconscious. In this way, putting a ring on a person can imprison him, taking this ring away can alleviate him . . .

Another experience, which had very revealing results: When my son Adan was six months old, he was ill with a very bad case of bronchitis. A doctor friend of mine, an herbalist, prescribed drops of essential oils. My ex-wife Valeria, Adan’s mother, was to pour thirty drops into his mouth three times per day. She quickly complained that the boy was not getting better.

I told her, “The problem is you don’t believe in the remedy. In what religion were you brought up?”

“Then we are going to incorporate faith into these drops. Each time you administer them, say an Our Father.”

That’s how Valeria did it. Adan recovered quickly.

So when a person seeking consultation asked me how to solve a problem I began, with great care, to prescribe what I called “psychomagic” with my Tarot readings.

Why not ordinary “magic”?

A witch doctor, supported by the spiritual superstitions of the patient, must present himself like the owner of superhuman powers obtained through a secret initiation and relying on divine and infernal allies in order to cure. The remedies they provide are a mystery to their clients, and the actions they recommend are intended to be performed without knowing why. In psychomagic, to the contrary, we need the individual’s understanding instead of superstitious beliefs. The person should know the reason for each of his actions. The psychomagician makes the transition from witch doctor to adviser: thanks to these prescriptions, the patient is converted into his own healer.

But first a warning: To describe a psychomagic act, it is to enter directly into the language of the unconscious. While I try to solve extraordinary enigmas with these acts, I am satisfied with dealing with small, simple human problems. Our daily difficulties conceal mysterious and more irrational abysses; they are the point of enormous icebergs . . .

Let’s take the case of a woman who cannot stop having vertigo. A simple flask of water was sufficient to make her feel bad. I advised her to place her feet between the thighs of a woman then rub the sole against her vulva.

Ahem . . . What was the result of this shock treatment?

The practice of this act provoked a crisis of tears followed by a saving awakening. The symbolic significance of her vertigo was the fear of being swallowed by her mother, fear in relation to the maternal sex, and so forth.

How do such ideas come to you?

They come. That’s all! The truth is that I am an artist. That is indeed why I have taken the pain to explain my journeys. The diverse creative stages of my existence shaped me and developed my imagination.
Alejandro Jodorowsky

“Jodorowsky is a brilliant, wise, gentle, and cunning wizard with tremendous depth of imagination and crystalline insight into the human condition. His work is a source of inspiration for me and for many of the most important and innovative artists of our time. Psychomagic is necessary reading for all who long to shock the world into awakening and remembrance of what has always been and what is still to come.”

– Daniel Pinchbeck, author of 2012: The Return of Quetzalcoatl

“Currently there are books that have become essential to winnow out established ideas and open new horizons. The texts brought together here have that special ability to contemplate old problems from perspectives that were not thought to exist.”

“Alejandro Jodorowsky seamlessly and effortlessly weaves together the worlds of art, the confined social structure, and things we can only touch with an open heart and mind.”

“The best movie director ever!”

"Writers Gilles Farcet and Javie Esteban draw the secrets of [Jodorowsky's] genius out in Parts I and II of the book. In Part III Jodorowsky offers us 'An Accelerated Course in Creativity.' Simultaneously cutting-edge and down-to-earth, this one's in a category all its own."

"Jodorowsky is a psychotherapist for love rather than money, and he accepts no fees for his services. His unconventional and visionary way of being is in itself the truest recommendation of the path to freedom and creative evolution he foresees for us all."

By Alejandro Jodorowsky
LIST PRICE $24.99
PRICE MAY VARY BY RETAILER