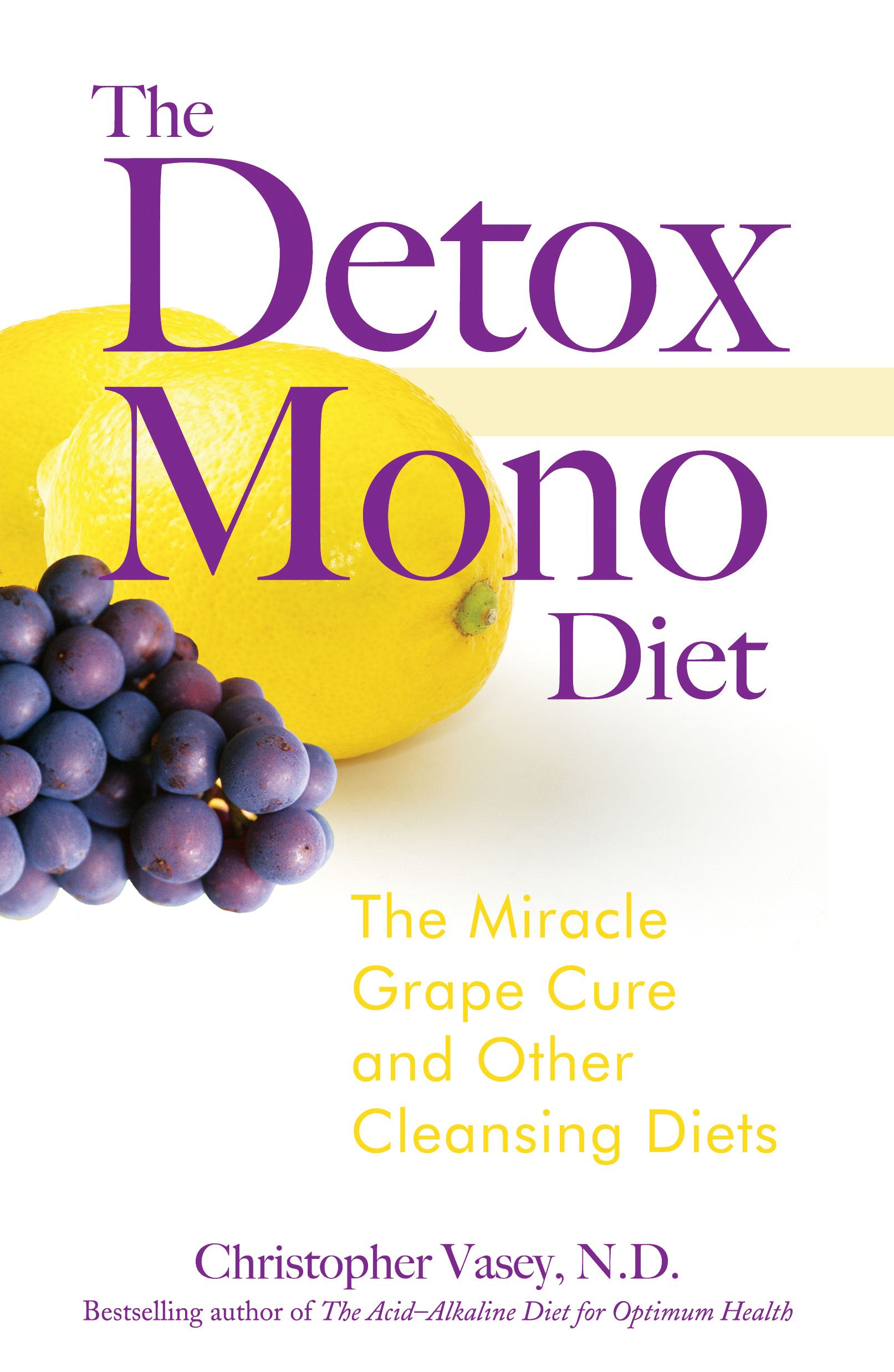 By Christopher Vasey
LIST PRICE $12.95
PRICE MAY VARY BY RETAILER

The grape cure, the lemon cure, the maple syrup cure, and the apple diet are all variations of mono diets that are based on restricting food intake to one food for a period of time. Using the famous grape cure pioneered by Johanna Brandt as his model (reproduced here in its entirety), Christopher Vasey demonstrates why these restricted diets are all remarkably effective in healing illness and restoring optimum health. Despite their different nutritive approaches and resulting healing benefits, all these diets work the same way: They help the body “burn” the waste products it contains to cleanse the internal cellular environment. They also keep the body’s eliminatory organs open in order to prevent the buildup of toxins. While these cures are responsible for healing people of many serious illnesses, including cancer, their principal use lies in the way they naturally eliminate waste products and prevent the body from absorbing toxins during the process.

The Detox Mono Diet is a practical guide that provides all the information necessary for following a detoxification regimen. To make the application most successful, the author explains how to interpret your body’s reactions in a way that will allow you to adapt the cure to match your specific physiological needs, making your return to optimum health a unique journey.

The True Nature of Illnesses and Therapy

Johanna Brandt was born in South Africa in 1876. Her father was a Dutch pastor; her mother was of French descent. During the Boer War that raged in South Africa during the early 1900s, Johanna became deeply involved in volunteer nursing.

She, too, married a pastor with whom she raised seven children while continuing to lead an active life. During World War I, she was diagnosed with a severe stomach cancer. In 1921, her doctors gave her only six weeks to live. Her desire to survive was so strong that even this somber news did not overwhelm her.

She refused all surgery and courageously set out in search of a cure. She had heard high praise for the benefits of fasting; tangible progress was rapidly achieved when she tried it on herself. By experimenting on her own body this way, she discovered the marvelous healing properties of the grape.

She attributed her complete recovery from cancer to the periods of fasting she practiced at the beginning of her regimen and to the Grape Cure she followed later. The extensively researched and progressive food diet she perfected enabled her to live and enjoy excellent health for another forty years. Until her dying day, at the age of eighty-seven, this amazing woman maintained total vitality.

This was how Mira Dunant-Brandt, Johanna Brandt’s daughter, recounted her mother’s life to me.

The cancerous tumor that afflicted Johanna Brandt was diagnosed clinically and radiologically. Based on the diagnosis, every doctor consulted advised surgery as soon as possible. There was no doubt the tumor was present. The fact that doctors gave her only six more weeks to live testifies to the seriousness of her condition.

And yet, Johanna Brandt recovered without an operation, using her own means, and lived for another forty years. The simple and natural means she discovered to address her illness gave birth to the Grape Cure, a cure that is now known throughout the world. Thousands and thousands of patients since then have followed her prescription and been cured.

Considering its simplicity and the amazing results it procures, one cannot help but wonder: Why is the Grape Cure so effective? Routinely, a remedy will work well against a specific disease but not against others. With Brandt’s cure, the opposite is true; the possibilities for effective action are varied and extensive. This raises the question: Are we dealing with a remedy that has numerous effects, or do these illnesses have a common nature?

The Grape Cure and other mono diets are disturbing by the number of questions they raise. They call into question so many medical concepts regarded as certain and definitive. Frankly, why does this cure succeed where more sophisticated remedies fail?

Tens of thousands of patients have been cured of a host of illnesses with help from the Grape Cure. Tens of thousands more could be cured by applying it sensibly. The results are observable and reproducible and should, therefore, be scientifically acceptable.

Rather than deny the cure’s effectiveness, it would be better to find out why it is effective. This would open new vistas, new ways to understand how the body functions and the role played by illness in this function. Possibilities for the art of healing would be enriched with new methods for positive treatment of the sick.

from Chapter 4: The Grape Mono Diet

THE BASIC VIRTUES OF THE MONO DIET

Because fasts and mono diets are so similar in practice, the same healing phenomena triggered by fasts are also triggered by mono diets. Autolysis (where the body draws nutrients from its own tissues), the updating of eliminations, and tissue regeneration all occur in mono diets. These healing reactions are somewhat less intense, as mono diets are less restrictive than fasts; nevertheless, the same bodily responses arise.

Autolysis is triggered as soon as the body needs nutritive substances that are not present--or are only present in limited quantity--in the food that is chosen for the diet. To continue functioning normally, the body draws nutrients from within itself. Diseased tissues and toxins are broken down and the internal cellular environment is cleansed, just as in a fast.

Elimination updating may also occur during a mono diet when the energy normally called on for digestion is sharply reduced. Purifying processes can then be activated to extract toxins from the tissues and carry them via the transport systems of blood and lymph to the excretory organs. In addition to this purification triggered by energy savings in digestion, specific purifying properties of the mono diet food are at work. For example, diuretic and laxative properties of the grape itself reinforce the purification properties of the diet.

Tissue regeneration also takes place due to cleansing that improves circulation and promotes efficient exchange of autolyzed substances, as well as by the intake of important nutrients contained in the selected food.

The fact that autolysis, elimination updating, and tissue regeneration take place at a modified pace is not necessarily a drawback. As we shall see, mono diets have a number of advantages over fasts alone.

Advantages of the mono diet compared to fasting:

• Removes the fear generated by not eating

Humans have become accustomed to the use of medicines and remedies, and they credit their cures to a single active substance in those remedies. In reviewing the results of the grape mono diet, there is a temptation to attribute its virtues to some substance in the composition of the grape.

In fact, the effectiveness of mono diets does not depend on what is present (the grape, for example), but on what is not present (all other foods customarily eaten)--foods whose absence triggers autolysis.

The proof: eating quantities of grapes while continuing a normal diet does not bring about the same results as a mono diet of grapes alone.
Christopher Vasey

“Enthusiastic applause for the combined efforts of Dr. Vasey and the late Mrs. Brandt! Give The Detox Mono Diet your full attention, and you will have the foundation for success in self-healing.”

“Detoxification is the missing link in Western nutrition, and fasting/juice cleansing is a pure and safe form (over water fasting) of detoxification. Dr. Vasey’s very informative book brings light to this vital process through one of the first approaches to cleansing, Johanna Brandt’s Grape Cure. There are so many people and so many health conditions that can benefit from this natural health approach found in The Detox Mono Diet.”

“Finally, a fully comprehensive and accurate dossier on how to rest the body from complicated combinations of foods--and enable a return to vibrant health. The Detox Mono Diet is inspiring and scientifically sound.”

"For those who are serious about cleaning the insides of their bodies, there is probably no better method than the grape diet, followed to the letter. Vasey’s book augments Brandt’s work and gives good modern information to back it up."

– Barbara Bamberger Scott, Curled up with a Good Book, Oct 2006

"I was not into fasting until I came across The Detox Mono Diet: The Miracle Grape Cure and Other Cleansing Diets, by Christopher Vasey, and soon my fridge became home to over 15 pounds of organic grapes. Now began a minute scrutiny of the book so that I could find out firsthand what this book and the fasting regimen is all about. . . . The wise and informative approach of the author is apparent throughout the book. I strongly recommend not only this book, but also the system of grape mono-diet to all seekers of health."

By Christopher Vasey
LIST PRICE $12.95
PRICE MAY VARY BY RETAILER