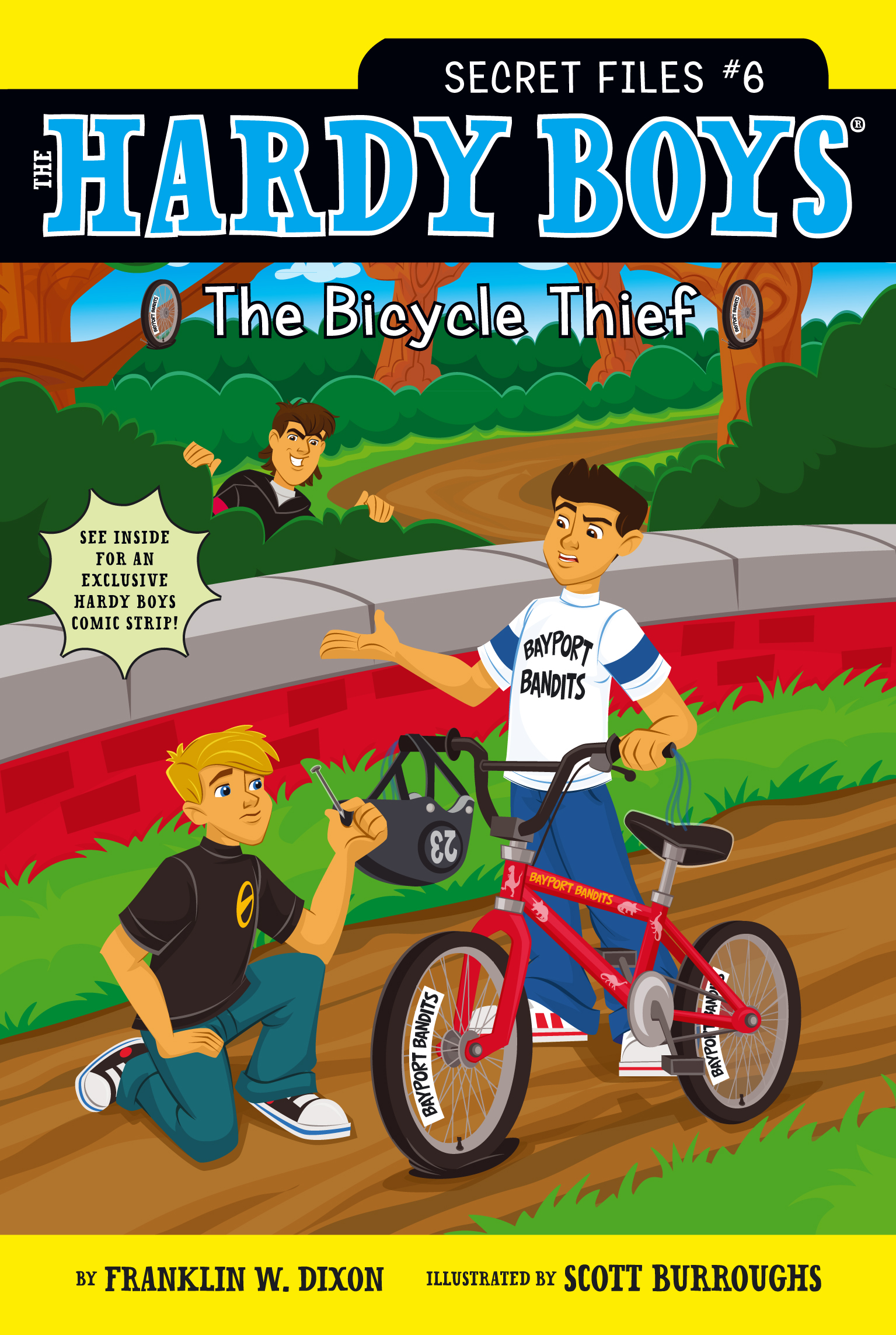 It's time for the annual Junior Bike Race in Bayport, and Frank and Joe are the top contenders. Midway through the race, Frank runs over a nail and blows a tire. It seems as if the day couldn't get worse--until Frank's bicycle goes missing!

Bayport's leading bully, Adam Ackerman, seems to be the prime suspect. But when he proves that he wasn't the bicycle thief, everyone turns out to be a potential culprit--even Mr. Mack's dog, Lucy! Can Frank and Joe crack the case and bring Frank's bicycle home?

The crowd was cheering so loudly, Joe could barely hear the announcer. It didn’t matter. He knew when the announcer called his name, because the crowd started screaming, “Joe! Joe! Joe!”

Joe stuck one hand up in the air and waved to the hundreds of people who lined the streets of Bayport for the annual Junior Bike Rally. Frank did the same when his name was called. They were next to each other on the starting line. On either side of them were a dozen other kids they knew. Chet Morton and his sister Iola were on their left. On their right was Phil Cohen, Bayport Elementary’s resident tech expert. But Frank and Joe ignored them all. They each knew that the biggest challenge would come from the other.

This was going to be a tough race. The track led all around town. They would ride on roads and on dirt paths through the woods. Although the roads had been closed for the race, none of the racers knew the exact route they would take. Instead, they would have to look for little blue flags that would mark the path. This was going to be a challenge—and Frank and Joe were ready for it!

Joe stuck out his tongue. He hated being called “little” anything. Especially since he was almost as tall as Frank (though he was a year younger).

Before Joe could respond, the race judge stepped out onto the track. The crowd grew quiet.

“On your mark!” the judge yelled. He pulled a white-and-black checkerboard handkerchief from his pocket. The racers readied themselves on their bikes.

“Get set!” He held the handkerchief high up in the air. All the racers stood up a little on their pedals, to give themselves an added push.

“Go!” the judge screamed. The crowd screamed with him. The noise was deafening. But the racers didn’t notice. They had only one thing on their minds: winning.

“And they’re off!” yelled the announcer.

Most of the racers stuck together at the start. They were a tight pack of bicycles, so close together that every turn threatened to knock the riders into one another. A few of the boys pulled ahead. Frank and Joe weren’t worried about them. This was a long race. It required patience. Starting in first place didn’t mean ending there. They stayed in the pack. Frank and Joe raced past the town hall, Bayport Elementary School, and even their own house. All along the streets of Bayport, people cheered as the racers rode by.

At the second mile, they came to the first difficult part of the race: a few hills right in a row. Joe and Frank made their way up and down the slopes, pedaling a little faster to get up those hills. All was fine until one of the racers in front of them missed a turn and crashed right in front of them!

Frank and Joe both pulled back on their handlebars and swerved just in time, right before they caused a bike pileup! Joe looked back to see if the other rider needed help, but someone was already on the way to help.

The race continued, with one fewer racer. The sun was hot and bright. The wind threw dirt from the road into their faces. But they kept going. They were already at the halfway mark. Now it was time to kick it into high gear.

Slowly Frank and Joe pulled ahead. They left the pack of racers behind. One by one they passed the kids who had been out front. Soon it was as if they were the only people in the race. No one could touch them. Pedals flying, feet pumping, they raced in silence. The only sounds they made were their heavy breathing, or the occasional “Ooph!” as one of them hit a dip in the road.

They were neck and neck as they came to the end of the race.

Joe managed to get the inside position. For half a mile the boys rode next to each other, so close that Frank could have scratched an itch on Joe’s hand. Ahead of them the finish line drew closer. Cheering crowds surrounded it on each side, waiting to see who would win, Frank or Joe Hardy.

Suddenly there was a loud explosion, like a balloon breaking.

Joe looked ahead of him. There was the finish line. He looked back. Frank was gone. Joe stopped. The voices of the crowd faded. The finish line disappeared. The course behind them was the dirt path that led from the Hardy house down through Bayport Park, which was just outside downtown Bayport. But there was still no sign of Frank.

“Frank? Where are you?” Joe yelled.

“Over here,” came a weak voice.