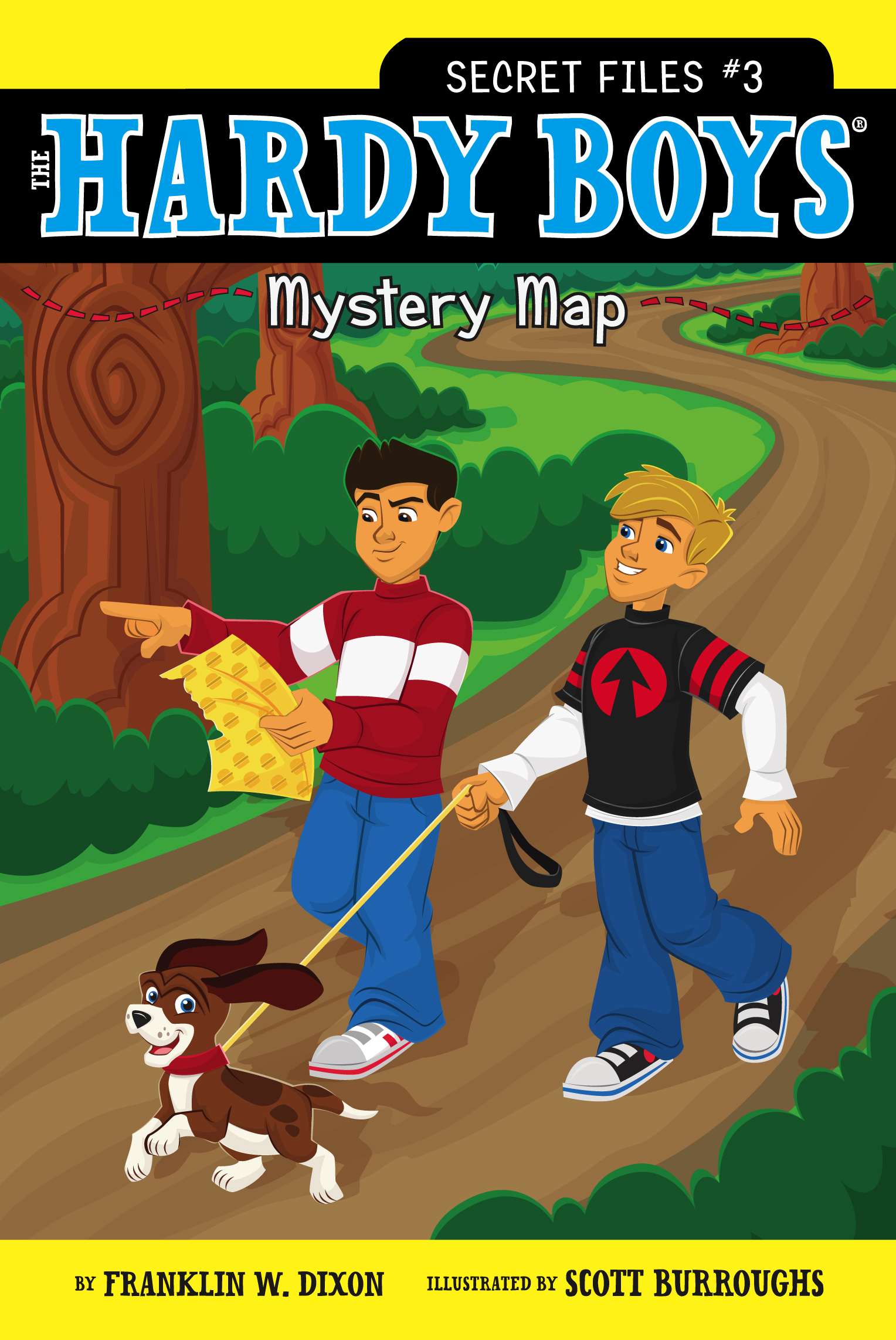 In Mystery Map, nine-year-old Frank and eight-year-old Joe Hardy get their hands on a piece of a treasure map. But they’ll need to work with their friends and hunt down the rest of the map in order to have a chance at finding the treasure. Let the sleuthing begin!

Frank Hardy spun around. A ball was flying toward him. He ducked just in time.

“Missed me!” he yelled back.

Then he swooped down and picked up another ball off the ground. There were at least ten people in the dodgeball game. And about eight balls. That made things extra exciting.

One of the other players was Frank’s brother, Joe. He was chasing their friend Iola Morton with one of the balls. But they were both too far away for Frank to try to hit them.

Frank looked around for someone else. His friend Phil Cohen was nearby. He was leaning over to pick up a ball. Frank grinned and winged his ball at Phil.

“You’re out!” he called as the ball bounced off Phil’s back.

“I’ll get him back for you, Phil,” Joe called out. He dashed over and flung the ball he was holding at Frank.

Frank dodged it easily. Joe was pretty good at dodgeball. But sometimes he got too excited and impatient to aim carefully enough.

A ball whizzed past, inches in front of his nose. It was going really, really fast. It almost hit Phil in the head, but he ducked just in time.

Frank spun around. Adam Ackerman was standing at the edge of the game. Adam was the worst bully in Bayport. He was eight years old, just like Joe, which made him a whole year younger than Frank, Phil, and some of the others. But he was bigger than all of them—and a lot meaner. He was always getting in trouble at school for picking fights and stealing kids’ lunches.

Frank frowned. Adam was right. They were playing in Bayport Park. Everyone was allowed to play games there, or have picnics in the grassy parts, or hike in the woods. But that didn’t mean it was right for Adam to butt in on their game.

Adam grabbed a ball off the ground. He had an evil glint in his eye as he looked around for another victim. Then he smiled.

Chet was Iola’s brother and one of the Hardy brothers’ best friends. He wasn’t very good at dodgeball or most other sports. But he had lots of other interests. His friends and family liked to joke that Chet had a new hobby every week. Lately he was interested in learning how to identify and follow animal tracks. Right now Chet was at the edge of the woods, facing away from the dodgeball game. He was bending over and staring at something on the ground.

Frank groaned. Chet was probably looking for animal tracks or something. When he got caught up in a new hobby, Chet forgot about everything else. That meant he’d never see Adam’s attack coming.

Joe and the others saw what Adam was about to do too. “Don’t do it, Adam!” Iola cried.

Adam ignored her. He wound up and threw the ball at Chet as hard as he could. And that was pretty hard.

“Noooooo!” Joe howled. Flinging himself forward, he tried to block the ball with his body before it reached Chet.

THUNK! Joe blocked the shot, all right. But not with his body. He accidentally used his face instead.

“Ow!” he cried as the ball slammed him right in the eye. He dropped to his knees and grabbed his face.

“Grow up, Adam!” Iola stomped over to the bully. “In case you’re wondering why we never invite you to play, that’s why!” She pointed to Joe, who was still clutching his face.

“Yeah. Either play by the rules or go away,” Phil added. Some of the other kids nodded. Others hung back, looking nervous. Almost everyone was at least a little bit afraid of Adam.

But Joe was too annoyed to be scared. He stood up and hurried over, still rubbing his face. “Adam,” he asked, “why do you have to be such a jerk?”

Frank looked over at Chet. He hadn’t even noticed his close call. He was crouched down in the same spot, still with his back to the rest of the kids. It looked as if he was tugging at something on the ground.

What is he doing? Frank wandered closer.

Chet heard him coming and looked around. “Hey, Frank, help me!” he said eagerly.

“Help you with what?” Frank hurried over.

Chet tugged again at something. Frank could see it now. It looked like the edge of a piece of thin yellow paper buried in the dirt.

“I was following some raccoon tracks over here,” Chet said. “But I think I just found a treasure map!”