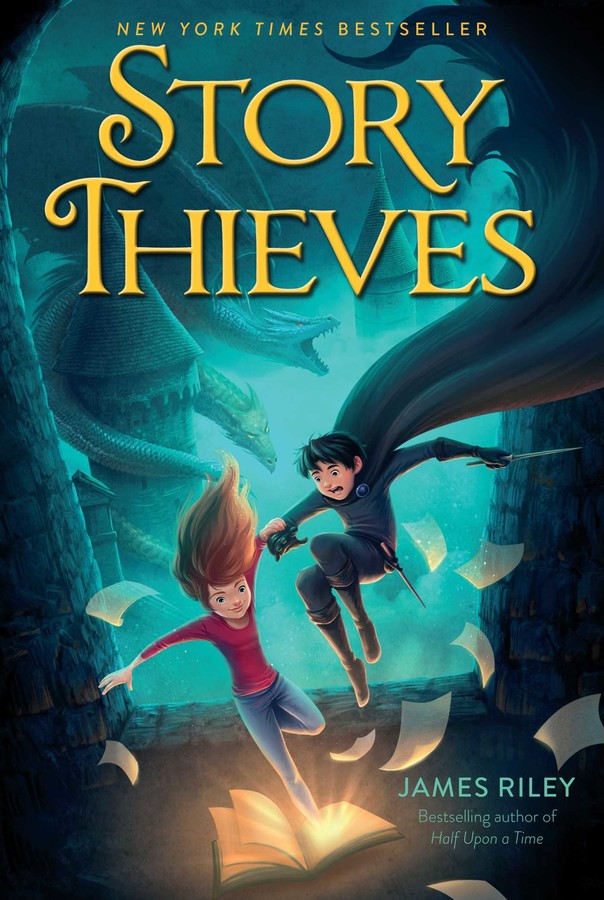 This “clever opener likely to leave readers breathless both with laughter and anticipation” (Kirkus Reviews, starred review) is the first in the New York Times bestselling series from the author of the Half Upon a Time trilogy.

Life is boring when you live in the real world, instead of starring in your own book series. Owen knows that better than anyone, what with the real world’s homework and chores.

But everything changes the day Owen sees the impossible happen—his classmate Bethany climb out of a book in the library. It turns out Bethany’s half-fictional and has been searching every book she can find for her missing father, a fictional character.

Bethany can’t let anyone else learn her secret, so Owen makes her a deal: All she has to do is take him into a book in Owen’s favorite Kiel Gnomenfoot series, and he’ll never say a word. Besides, visiting the book might help Bethany find her father…

…Or it might just destroy the Kiel Gnomenfoot series, reveal Bethany’s secret to the entire world, and force Owen to live out Kiel Gnomenfoot’s final (very final) adventure.

Story Thieves CHAPTER 1
Owen wanted to scream at the horror before him. But the sound wouldn’t come and the nightmare only continued, forcing Owen to ask himself, deep down, one question:

“Can anyone tell me what three-fourths times two-thirds is?”

Mr. Barberry stood at the board at the front of Owen’s classroom, his arms folded, waiting for a hand to raise.

No, not that question. The real question was this: Was there anything in the world that could possibly be more boring than fractions? Owen frowned as Mr. Barberry gave up on volunteers and just picked someone. “Mari? Three-fourths times two-thirds?”

Being locked in a room with no windows or doors, without anything to do, while wearing a blindfold and being forced to name various types of trees? That’d be pretty boring, but not fractions boring.

Maybe if someone gave you enough soda to keep you awake for hours, then read furniture building instructions to you? In another language?

Except what if you accidentally started to learn that foreign language without realizing it? That’d almost be considered worth it to some people. So that was instantly out.

“Owen?” Mr. Barberry said. “How about you? One-third times two-thirds.”

“That’s right,” Mr. Barberry said, and turned back to the board while Owen let his mind wander again.

Maybe being stuck home sick and too feverish to think or do anything except watch TV, and the only channel that came in was an infomercial for other infomercials. That would be pretty boring.

Nope, fractions still won. And by a lot.

If only the bell would ring early from some freak electrical surge. Sure, it had never happened before, but Owen was nothing if not optimistic. And that was something he was pretty proud of, since it wasn’t easy to be optimistic in the face of all these math problems.

“How about four-fifths times one-eighth?” Mr. Barberry asked. “Bethany, want to take this one?”

There was no answer, so Mr. Barberry turned around. “Bethany?”

Owen threw a look over his shoulder and saw Bethany hunched down behind her math book, her head not even visible. She wasn’t actually sleeping, was she? That’d be brave. Dumb, but brave.

Either way, at least something was happening, and that meant class got just a fraction less boring. Owen covered his smile with his hand. Fraction. Ha!

Bethany jerked back in her chair, and her math book tumbled forward, revealing something else behind it: Charlie and the Chocolate Factory.

Mr. Barberry just glared at Bethany for a second as she looked around, a mix of confusion and fear on her face. Owen winced, waiting for Mr. Barberry to start yelling, but fortunately the bell rang right at that moment, releasing them for lunch.

The girl nodded, her long bronze-colored hair falling forward over her face. Owen threw a sympathetic look back at her, then noticed something weird.

Was that chocolate on her chin?

But then the other students blocked his view, and he shrugged, not willing to chance getting yelled at too. Besides, lunch meant at least he had a half hour of no fractions.

After waiting in a lunch line that he’d have to remember to add to his list of the most boring things ever, Owen carried his tray of pizza and milk around the cafeteria, looking for a seat. He considered one table with some boys from his class, but they ignored him as he walked over, so he kept going, pretending he’d always meant to sit by himself.

That’s why he brought a book, anyway. Sitting by himself wasn’t exactly new.

Owen had read Kiel Gnomenfoot and the End of Everything twice now, but the seventh book in the series was coming out next week, so it couldn’t hurt to catch up. It’d been hard enough getting a copy out of the library anyway, despite the fact that his mother worked there. This was the book that ended with Dr. Verity surprise attacking the Magister, Kiel’s teacher, after all. Owen personally knew at least five people who had cried at the idea that the Magister might die. And ten people who called the series a Harry Potter rip-off, which it sort of was, but everyone still loved it.

As Owen started to read the last chapter, where Dr. Verity broke into the Magister’s upside-down tower, he saw Bethany stomp into the cafeteria out of the corner of his eye. She plopped down at a table on the other side of the room, then pulled out her book and looked around suspiciously. Then she dropped her head, ate something, and sat back up, glancing around again.

What was she doing? Eating behind the book? Did she even have food? Was she—

Whoops. What she was now, was staring at him.

Owen immediately looked everywhere but at Bethany, but it was too late. She slammed her book closed, threw him a dirty look, then exited the cafeteria with an annoyed huff.

Owen sighed and dropped his own book onto the table. She was probably feeling embarrassed after getting yelled at and didn’t want anyone staring at her, which meant he’d just made things worse. Awesome.

His guilt pushed Owen up out of his seat and after Bethany to apologize or make a joke. Only, by the time he got to the hallway, there was no Bethany. In fact, the entire hallway was completely empty, except for the copy of Charlie and the Chocolate Factory Bethany had just been reading, which now lay on the floor just beneath a locker.

Huh? Not only had she just left her book on the floor, but worse, Owen could tell even from a distance that it came from his mom’s library. That wasn’t even her book!

And were those chocolate stains on it?

That was not cool. What was Bethany thinking? Who checked out a book and got chocolate all over it, even if it, you know, fit the story? Other people wanted to read these books too, and didn’t want to have food stains on their copy.

Shaking his head, Owen grabbed the book and dropped it into his bag, then walked back into the cafeteria to get back to important things, like Dr. Verity’s attack on the Magister. Unfortunately, the bell decided to ring then—cruel, but expected. Owen sighed, threw away his garbage, and tromped back to another few hours of mind-numbing semi-learning.

Eventually, mercifully, the day ended, and Owen exploded out the front door like he was launched from a cannon. It felt so good to be out that he walked that much quicker to his mother’s library, where she worked almost every night. As usual, Owen would go by and help out where he could, mostly because she made him, but partly because it was just fun being around all the books.

When things finally cooled down, Owen sighed and pulled out his homework, knowing that his mother, no matter how busy she was, would notice he wasn’t busy and make him do it anyway. Only, when he went to pull out his math book, there was Bethany’s copy of Charlie and the Chocolate Factory in his bag.

Um, whoops. He’d sort of forgotten all about that. He’d picked it up meaning to give it back to Bethany and glare at her judgmentally for the chocolate stains. But now that he thought about it, had she even been in science after lunch? He couldn’t remember her being there, or in any other class that afternoon. Maybe she’d gone home sick after eating too much chocolate and using a library book as a napkin.

Owen shrugged and checked the book back in to the library. She knew where to find it if she wanted it again.

His mother caught him putting the book on a pile that was supposed to go back out onto shelves, and gave him a look. He sighed and stood up, knowing where this was going. “Those all go in the children’s section,” she said. “I’m locking up, but I have a few things to take care of in the office after that, so finish your homework when you’re done.”

Ugh. Of course. Owen picked up a pile of books about half as tall as he was, then walked them slowly back to the children’s section.

As usual, it was a mess, like a hurricane had plowed into a nuclear bomb right around the Rick Riordan books. Owen sighed and dug in, pulling a few interesting books aside as he noticed them. That was the only good part about cleanup—he’d sometimes find things that looked like a good read.

Ten minutes later the children’s section was at least cleaner, with random piles stacked on top of over-full shelves. Owen looked sadly at the stack of books he’d carried here to put back, then sighed again and picked up Charlie and the Chocolate Factory, knowing there’d be no room for it.

But then, as he found the D section for Roald Dahl, something weird happened. His hand . . . jumped.

He looked down at his hand and the book in it, thinking he’d just imagined the jolt.

The book in his hand jumped again.

“Gah!” he said, dropping the book. It smacked the floor hard and just sat there for a moment.

Then it jumped a third time.

What was happening? Owen backed away as the cover and a bunch of pages flipped open all by themselves. Was the book haunted? Was the entire library haunted? Was it okay to find that awesome even while being scared?

And then, the last thing in the world that Owen ever expected happened.

Five chocolate-covered fingers pushed right out of the center of the book, grabbed the edge, and began to pull themselves out.